The gang's all here!

I was a big fan of Bloodstained: Curse of the Moon when it came out in 2018. Back then, it was a stretch goal for the Bloodstained: Ritual of the Night Kickstarter and we all assumed it would be a fun little one-off game. It must have sold pretty well, because Inti Creates has now released a sequel that takes the original game’s formula and adds a few surprising layers. Mysterious swordsman Zangetsu teams up with allies new and old as they continue to explore a world informed by the pre-Iga Castlevania games.

As before, Zangetsu will find and team up with several new characters, each with different abilities. First is spear-wielder Dominique, who you may remember from Ritual of the Night. She has the highest jump of the four initial team members, and can attack enemies above and below her. Her down-thrust has the ability to bounce off enemies or candles, so if you get creative, you can combo towards certain doors. Her subweapons are spells, including one that can heal the party.

Next up is Robert, an old friend of Zangetsu. Of the three new characters, he has the most limited utility. He attacks with a rifle, and while his shots can cross the entire screen, it’s not a particularly powerful attack. However, he can lay down while firing, which gives him some advantage, and crawl forward through certain paths. His subweapons include an overhead lance (which makes him more useful), a grenade, and a mid-range energy weapon. Robert’s biggest problem is his extremely low health.

Finally, the objectively best new character is Hachi, who might be a winking reference to Gato Roboto. He’s a big tinker-bot mech...piloted by an adorable corgi. Hachi presents a big target, but has high health to make up for it. His melee attack has extremely short range, but he has a very useful hover jump and in lieu of subweapons, he can turn invincible (although it quickly drains your MP). Hachi is who I used most often thanks to his high health and hover jump. 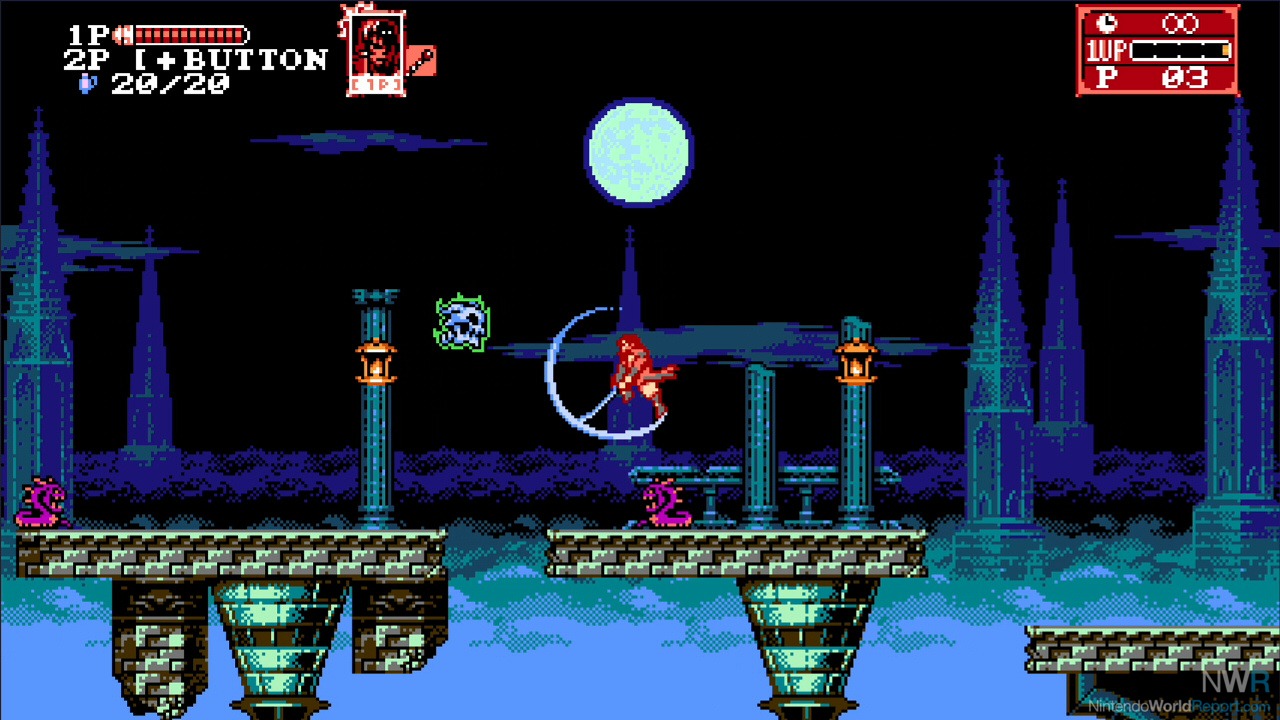 As before, as you pick up these allies, Zangetsu (who plays the same as he did before) can switch to the other characters with the L or R buttons. Subweapons are mapped to the X button by default, but I found that awkward, and I was happy to see an option to remap the buttons (go with ZL or ZR). Having all four characters gives you lots of options, and your top priority will be making sure everyone has enough health. The maps are large, with tons of alternate routes, some of which will hide upgrades to your party’s health, MP, attack power, and defense. You’ll also see plenty of paths you cannot reach, at least when you first play through the stages.

Like its predecessor, Curse of the Moon 2 has several chapters that play out in different ways. Something happens at the end of the first chapter that forces you back to the beginning without one of your allies, and the boss fights in round two are much tougher. If you find certain items during your second run, you can save them from the final boss. Once you do that, the game really opens up in the final chapter, because in a post-credits scene of the second run, Zangetsu and his new pals get a real Avengers: Endgame moment (and then, later in the 3rd run, things get weird--in a good way). 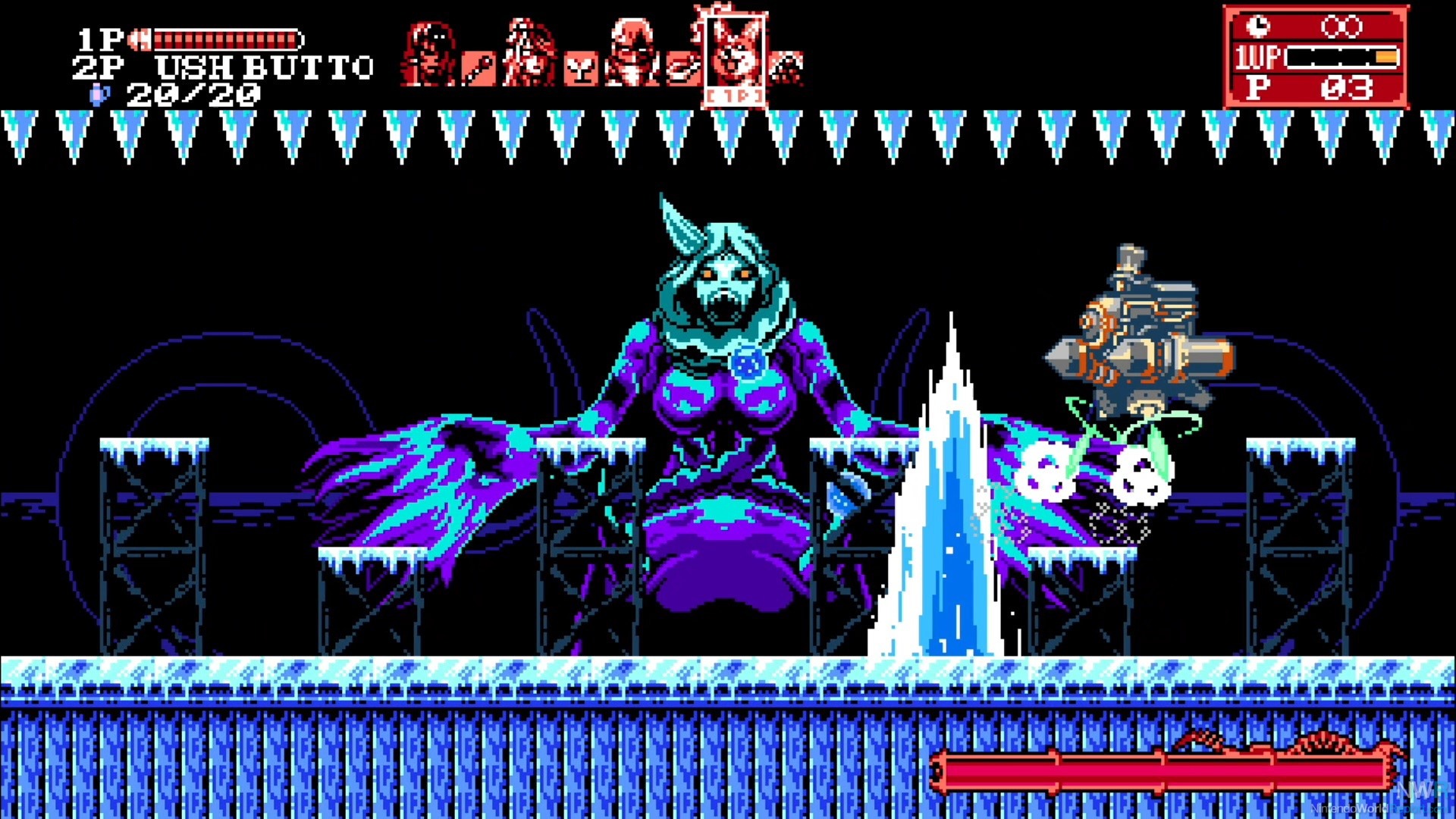 Curse of the Moon 2 is harder than the original, which is evident in the Veteran difficulty option that limits your lives and brings back the classic Castlevania knockback. It’s brutal, but the other option, Casual removes the knockback and gives you unlimited lives so you always have the option to retry from the last checkpoint with your entire party healed up, so stupid mistakes can be undone. If one of your allies dies, you’ll go back to the last checkpoint anyway, but without that character for the rest of the level. Is there any advantage to this? Sort of--if you lose a character during a boss fight, continuing on without them preserves the boss’ health when you died, so if the boss was on death’s door when you lost, say, Robert, maybe you can take it out in one or two hits once you get back. In all other situations, it’s better to simply retry from the pause menu.

Curse of the Moon 2 also introduces couch co-op, which is...there, I guess? Unless both players are good at Castlevania-style platformers, you’ll probably be more frustrated than anything else. I will say that the game is surprisingly playable on a single Joy-Con. Might be worth a shot if two people are big fans, but otherwise this game is best tackled solo.

I really enjoyed Curse of the Moon 2, especially once things opened up in the third run. And don’t take that the wrong way--I also had fun with the first two runs--but the game really turns into something ridiculously wonderful in that third run. In general, I didn’t like the boss fights, especially during the second run, because they started to exhibit Inti Creates’ bad habits when it comes to bosses--to avoid damage, you have to be be extremely precise, and I just don’t think the Curse of the Moon controls and physics are really up to that demand. And you know what I really love? Final, incredibly-hard-to-avoid gambits once you kill a boss. Switch to whichever character will survive the hit and pray!

Overall, though? Bloodstained: Curse of the Moon 2 is a great game that pays loving homage to the classic old-school Castlevania games. Here’s hoping this does well enough so Inti Creates can go even bigger with a third entry.