If I wanted a crow to laugh at me every time I died, I’d just go outside

It has been awhile since I’ve reviewed a game that I’m as conflicted on as Ministry of Broadcast, a 2D puzzle-platformer published by Hitcents. Ministry of Broadcast advertises itself as a narrative experience, with equal parts dumb and dark humor, featuring gameplay heavily inspired by classic Prince of Persia titles and various brainteasers to figure out along the way. For the most part, the game does manage to deliver on these promises⁠—the jokes hit and the puzzles are clever⁠—but sometimes misses the mark by trying to throw a few other concepts at you. Ones that Ministry of Broadcast does not feel all that tuned for. 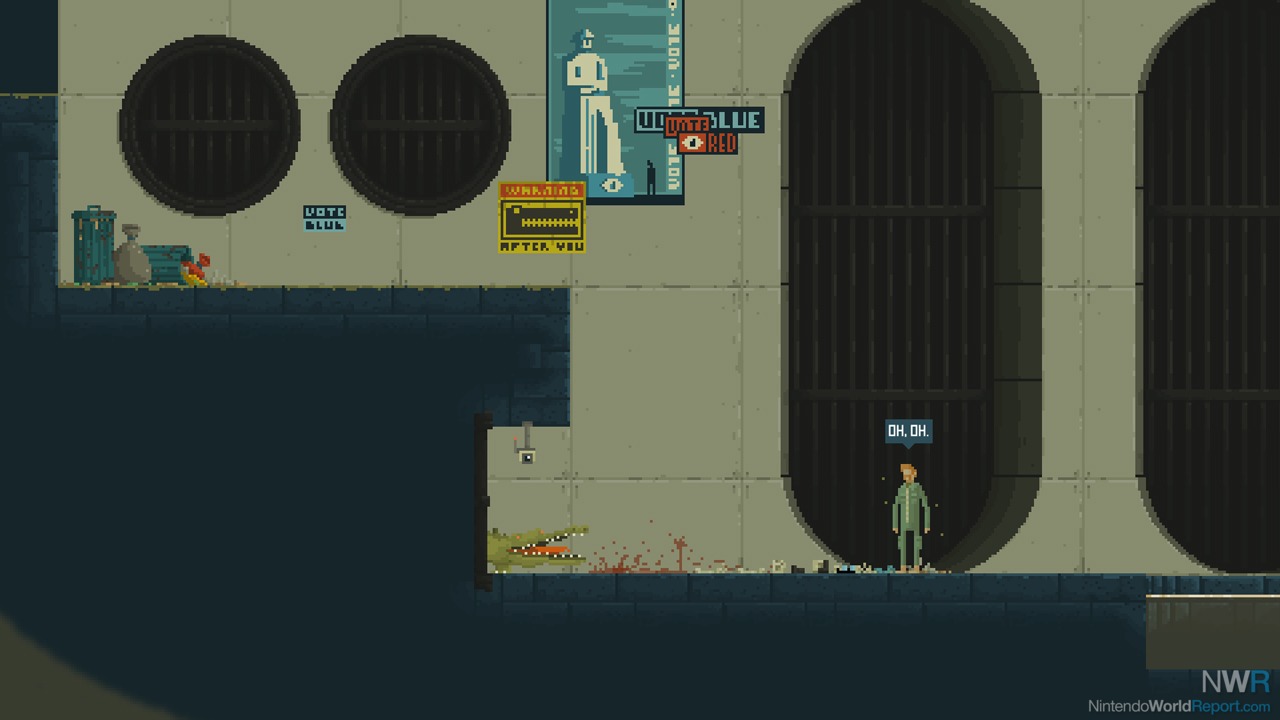 The player takes control of a man simply referred to as Orange, who is a contestant on a reality show called “The Wall Show.” This show is being run by a totalitarian regime, in a country that has been divided Berlin-style by a seemingly impenetrable wall, but winners of this reality show get a chance to cross the wall if they would like. Orange hopes to win and cross so that he can be with his family, but in order to do so he will have to do horrible things to the other contestants around him, usually resulting in their injury or even death. As each day brings new challenges, it slowly becomes apparent that there may be more to this show than meets the eye, but it also becomes apparent that Orange may be too much of a dope to notice.

Gameplay in Ministry of Broadcast is overall pretty simple. Moving is stuck to a 2D plane while pressing B allows you to jump and Y allows you to interact with certain objects. ZR will allow the player to sprint, and they can also climb up to ledges above them by pressing B. Each day the player must complete a series of challenges (or “arenas”) that can involve one of two things. The first is the aforementioned puzzle platforming, where the player must navigate various obstacles such as spike pits or dogs using their creative wits. For instance, one puzzle that stood out to me near the start was a point where I had to cross a spike pit that was too wide to jump across, and in order to do so I had to slowly let other contestants out a door so they themselves would trip into the spikes. I did this until there were enough people to form a bridge across the pit, allowing me to happily walk right on to the exit. This kind of fun and dark puzzle solving is where Ministry of Broadcast shines.

Where it sadly doesn’t shine is the other type of challenge, when the game expects you to perform precision platforming despite the fact that the controls very much do not feel tuned for it. Oftentimes, Ministry of Broadcast will throw you into a situation where missing or mistiming a jump will immediately kill you, which may sound like par for the course in the platformer genre. The main issue is that jumping feels just clunky and imprecise enough that if the game is asking you to make a pixel perfect jump (which it will), this is way easier said than done. This is also complicated by the fact that Orange will not climb unless he has come to a near stop, if you hit the jump button while running he will simply thrust himself forward even if there is something he can climb. This becomes a major issue when you’re put in a situation where you need to move quickly and walking is not an option as Orange’s default walking speed is painfully slow. It’s these moments where Ministry of Broadcast’s sarcastic charm falls away and is replaced by various levels of frustration.

At the end of the day, Ministry of Broadcast has a lot of charm. With its interesting setting and its hilarious, sarcastic sense of humor there’s a good chance you might be able to force your way through some of the more frustrating parts. However, others may find that those frustrating sequences happen more often than deemed acceptable to put up with. Add the fact that every death leads to a crow taking an antagonistic shot at the player, an aspect that has an ability to be funny one second and incredibly annoying the next, and Ministry of Broadcast becomes a game in which the term “your mileage may vary” heavily applies.