WHAT THE GOLF? (Switch) Review

You cannot putt this down

Sometimes I prefer the simple things in life. Vanilla-flavoured ice cream? Yes please. A nice relaxing day without any appointments? Fantastic. But above all, I enjoy the simple pleasure from puns. These word constructions can in context provide a laugh or a groan from someone standing nearby. While usually they are simple jokes about observations around us, puns can be deceptive in how they are able to be much more than just a funny gag to end a sentence. WHAT THE GOLF? can best be compared to a pun. Something that made me smile every time I picked up the game, winding up being more clever than you might think. It’s one of the most fun video game experiences I’ve had so far this year.

WHAT THE GOLF? has a simple premise. Every ball, animal, person, or object works with simple golf physics. Most of the time the goal of each stage is to hit the flagpole at the end of the level. You do this by controlling your aim and power of each shot. But unlike most golf games, these objects can act in all sorts of unique and hilarious ways. Be it a swing that launches a cow to a flagpole, a car that races along the aim of your arrow or even being the aim/power indicator itself. Each stage builds on top of previous ideas or introduces new mechanics altogether. This allows every level, world, and game mechanic to feel fresh. Almost every world could stand on its own as a fully developed game mechanic. Yes, you are still aiming and shooting objects by the end of the eighth world, but the fresh ideas keep on coming and never feel like they are overstaying their welcome. The surprising twists and ‘Rube Goldberg’-like level designs made me enjoy each level. It helps that the presentation of the game is quite slick, with a pleasant art style that remains consistent even though some stages change style from an overhead shooter to a racing level where you control a rocket speeding past a sheep. Each level also comes with two additional challenges. Some require clearing a level within a set amount of shots, while others offer completely new designs or mechanics. The replayability is high and some of these stages are a real challenge for those looking to complete the game 100%. 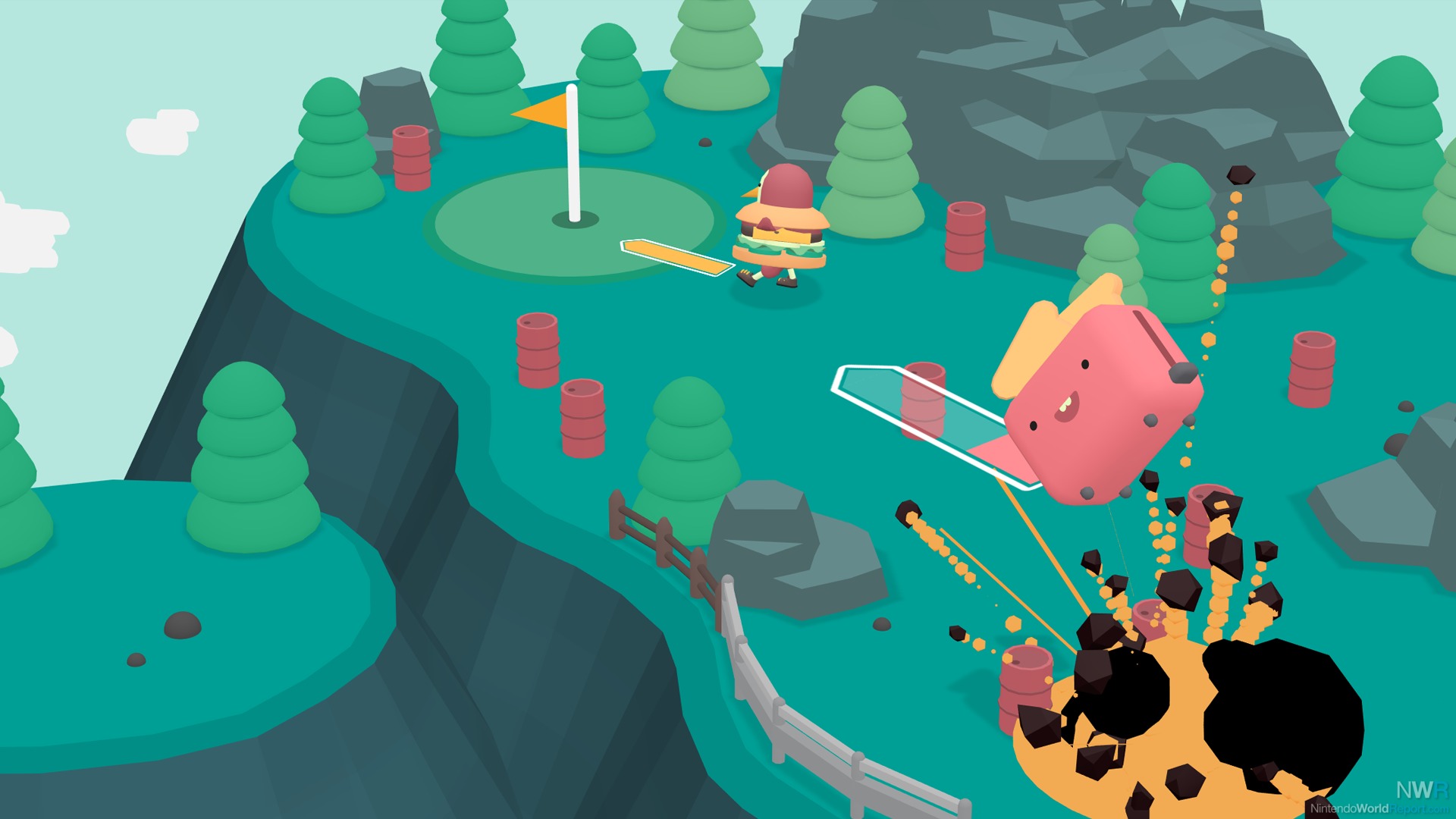 The overworld is a different story. You advance through the different levels by rolling around laboratories that study different aspects of golf. While it offers some creative ways to roll around and discover new levels, this part did get repetitive after a while. I wish there was a way to swap to a level select list if I wanted to replay certain levels. This also goes for completing the challenge levels, meaning you must roll around the overworld trying to discover any levels you didn’t fully complete. Some of the music is charming and performed with what I like to call ‘mouth-vocals,' giving a real personality to some of the levels. But in the soccer levels for example this became mundane and annoying quickly. In addition, while this game is clearly optimized for touch controls, the button controls can be a bit finnicky at times if you wish to aim precisely. It did cause me to restart a challenge level a few times, though you can get used to this control scheme over time.

Still, some great modes await you once the main levels are cleared. The ‘show a friend’ mode is a novel one. While this does spoil some surprising levels in the game, it is a great way to give others a sample of how to play. It shows and emphasises that almost anyone can play this game. The mechanics are simple to understand, but hard to master. Which becomes apparent once you give ‘The Impossible Challenge’ a try. This is a selection of some of the hardest levels in the game, where every shot counts towards your overall score. It’s a brutal challenge, but also feels like a true test of your skill at the game where you aim each shot carefully. Exclusive to the Nintendo Switch is a Party Mode where you can compete against one other player in a series of fun challenges using two controllers. It’s some of the best fun you can have in a local multiplayer session since it focuses on the pick-up-and-play aspect of the game. 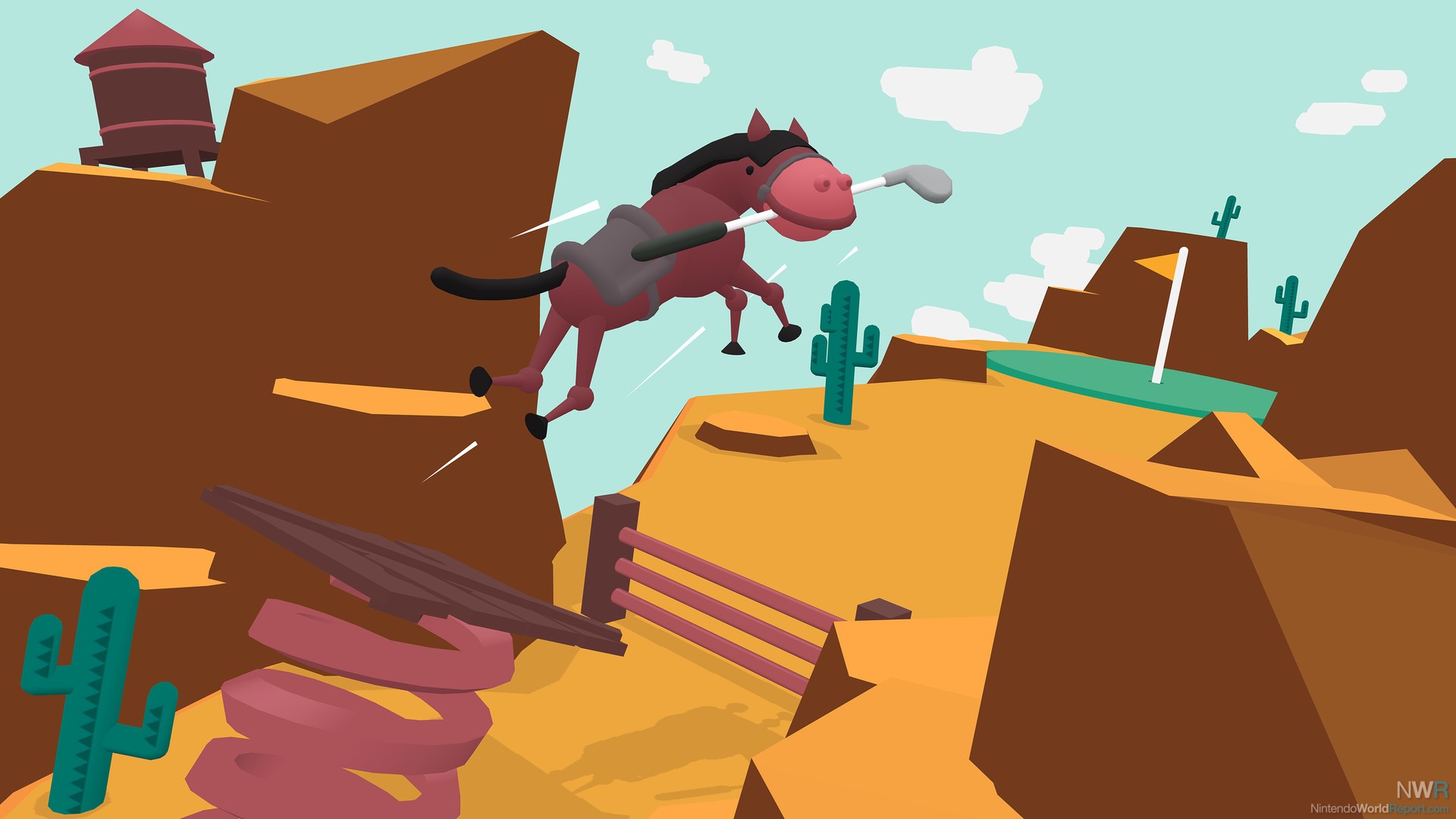 Overall WHAT THE GOLF? is a great package for both single and multiplayer sessions. The game cleverly uses a singular game mechanic, but stretches it out into so many different genres, styles and even other video games that it is truly impressive that the experience never gets stale. The overworld is a bit tedious to fully explore and the button controls aren’t as perfected as the touch controls, but still I think you cannot go wrong with this game. WHAT THE GOLF? is a perfect blend of comedy, fun and video games that had me smiling from ear to ear the entire way through. It’s great FORE the HOLE family!

I played this on apple arcade and I must say much of it was enjoyable but some of the later levels were just annoying. They were gimmicky in a not fun way. The game is a great satire though and several levels were golf spoofs of some great games. It is a game that probably can never have a good sequel but not every game needs one.