It’s no secret that this adventure is the most Mana-ificent of the series.

The second biggest RPG remake of April is Trials of Mana, which has undergone some major reconstructive surgery since its SNES-era counterpart. In a little under a year, Western audiences went from zero versions of the third Mana game to two, one the finally localized Super Famicom original and the recent remake, in all its 3D and HD glory. While it won’t set the world on fire with its gameplay and the removed multiplayer may be a disappointment to some, a brisk pace, vivid presentation, and multiple playable characters make the Trials of Mana remake a compelling and worthwhile investment.

Immediately after booting up the game you’ll be faced with an important decision, almost as important as whether to punish yourself by playing as four thieves in the original Final Fantasy. From a selection of six characters, you need to choose one main character, who represents the primary protagonist and whose story takes center stage, and two side characters. For my playthrough, I chose Angela as my first character, Kevin as my second, and Charlotte as my third. Angela is your prototypical black mage, Kevin a physical fighter, and Charlotte a support healer, so I had a fairly well-balanced party, except for the fact that Kevin is incredibly powerful and becomes even stronger at night. After completing Angela’s prologue, I quickly ran into Kevin and then Charlotte, and our merry trio was on its way.

In spite of the story being divided into six or so chapters, the game doesn’t really indicate directly when a chapter begins and ends. I only ever knew what chapter I was on after seeing it displayed on the save file screen. My understanding is that most of the main story beats are the same regardless of who is in your party, but every character has their own prologue to playthrough and slight narrative divergences depending on the make up of the party. Moving on to the story proper, the Mana Tree is beginning to lose power and a variety of nefarious ne'er-do-wells are out to reclaim the Sword of Mana and unleash ancient creatures called Benevodons to wreak havoc on the world. And so your party races to visit eight Mana Stones, enlist the help of their respective elemental guardians, and open the path to the Sanctuary of Mana where the Sword awaits. 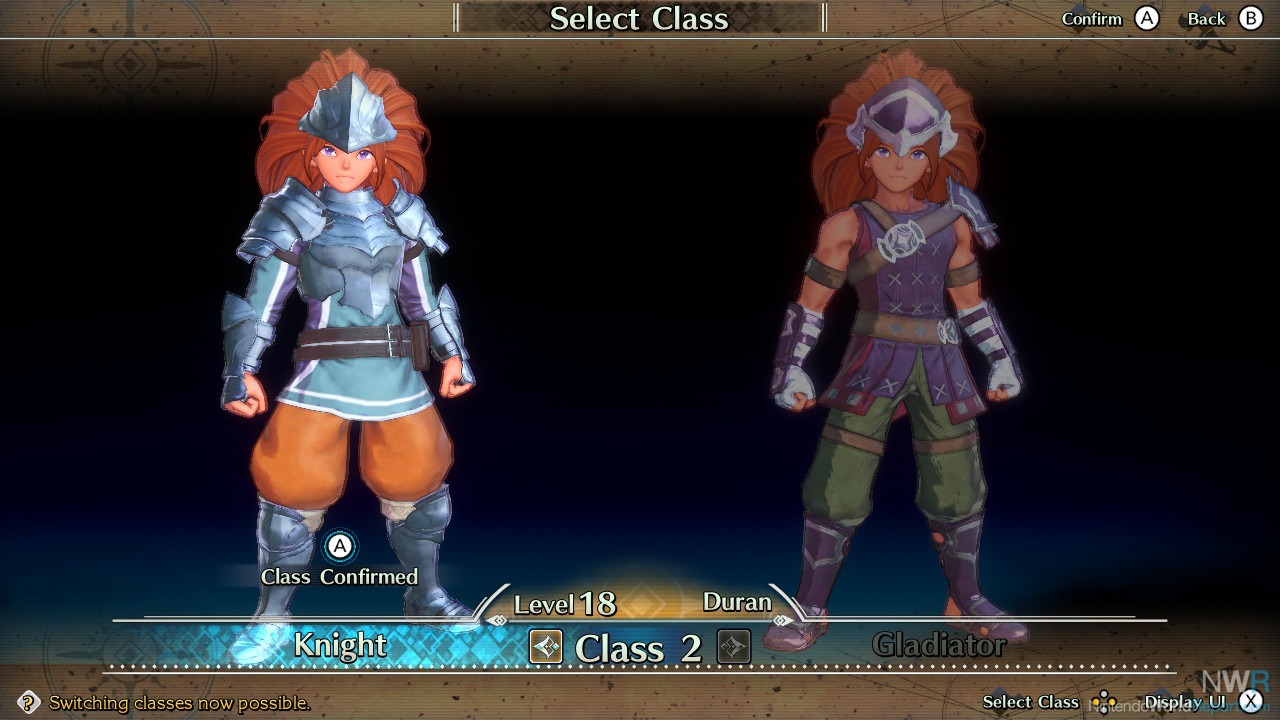 Trials of Mana is a 3D action-RPG with dynamic, fast-paced combat that allows you to rotate between characters and even pause to choose items or issue commands. In addition to a light and heavy attack, each character has a meter that they build up to unleash a powerful Class Strike, which can often hit multiple enemies, do massive damage, or both. Combat takes place within a circular area that is only displayed on screen if you come up against it, which is how you can retreat from battle. Enemy attacks are telegraphed through red lines, squares, and circles, and this allows you to use a dodge move to avoid damage. Progression comes in a few different forms. In addition to standard level ups through experience points, each level gained also awards Training Points that can be used to raise stats like Strength, Luck, and Spirit. After pouring a set number of points into a particular stat, you unlock bonuses like equippable abilities, spells, and further stat bumps. One especially notable mechanic is the ability to change classes multiple times, with each change raising your character’s stats and opening up new Training Point perks. With Charlotte, I wanted to focus on healing initially, but through class changes I was able to give her some offensive magic as well.

An entire 15 to 20-hour playthrough ends up being quite linear on its own. The general pattern is that you locate a Mana Stone, visit a new town, traverse a meadow or path with groups of enemies to battle every so often, and then enter a dungeon with more minor enemies and a boss battle. Even though each new area presents a series of closed spaces, there are still treasure chests and items scattered about. The only real side quest in the game revolves around locating a creature named Li'l Cactus who appears in 50 different places in the world, sometimes more carefully hidden and sometimes in plain sight. Every five times you find it, you unlock a new in-game bonus, like shop discounts or the ability to escape combat more quickly. But this brings me to a major gripe with the game: it’s a little lacking in variety and depth. There’s almost no need to talk to anyone in any of the towns since your objective is always denoted both on the UI’s minimap and on the main screen. In other words, it’s basically impossible to get lost. For me, someone with a more limited schedule, I welcomed the fact that I didn’t need to talk to everyone to discover my next objective, but this type of hand-holding comes down to personal preference. At the very least, I would have liked to see some optional side quests thrown in to add some variety and to break up the monotony of the main quest. 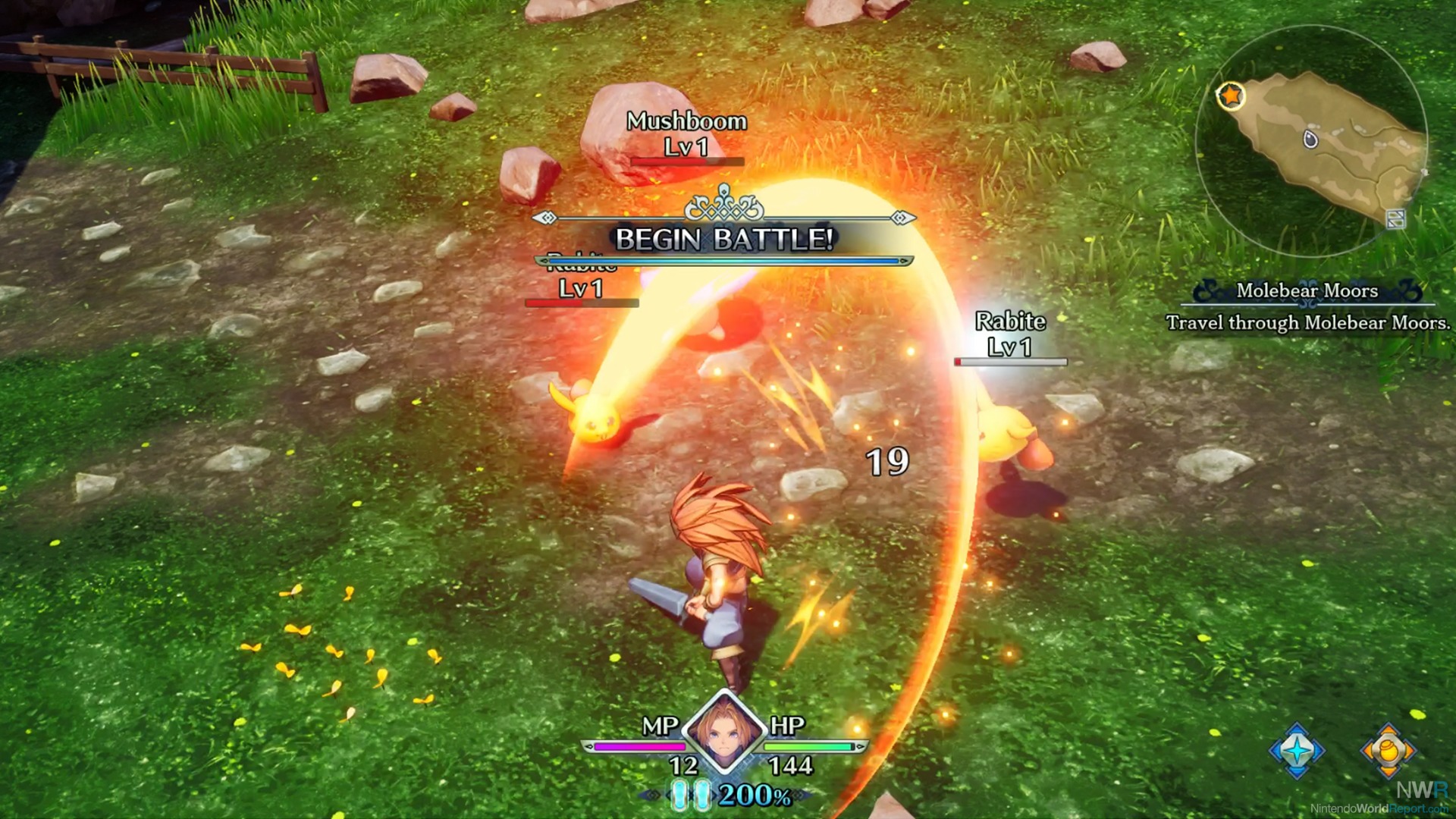 Whereas the narrative structure might not win any awards, the music and visual style are both excellent. Hiroki Kikuta, who worked on both the Secret of Mana and original Trials of Mana soundtracks, supervises this arrangement of his original work, and it helps to evoke the wonder and charm of the game’s lush fantasy world. From caves and jungles to mountains and castles, the music pairs beautifully with the setting, and I never left my Switch or TV on mute for very long. Regarding performance, Trials of Mana hovers around 30 fps, docked and handheld, and there is some pop-in that I noticed in both configurations, but most of my playthrough was portable and it was still very smooth. As a final note, I wanted to point out that the combat UI and visual flourishes are incredibly attractive and engaging. Damage numbers, both received and dealt, are large and easy to see; there’s seamless transition into and out of combat, with experience and gold earned shown in the top-left corner; and health, mana, and class strike meters, in addition to floating blue particles that fill up the latter meter, are all highly visible. Many players will probably opt to play an vibrant action-RPG like this one on their TV, but the handheld experience is second to none.

Without a doubt, the Trials of Mana remake is the definitive version of what for many of us was a long-lost classic. If you don’t mind replaying the game with different party configurations to see the minor story differences and unlock more endings, there are dozens of entertaining hours to be found here. For those who want more story depth, side quests, and gameplay variety, Trials of Mana probably wasn’t and still isn’t for you. I found the quick and eye-catching combat to be both satisfying and exciting; you can even earn bonuses depending on how fast you defeat enemies and whether or not you take damage in the process. The character endings I saw felt a little lackluster, but I’m compelled enough by the presentation and the simplicity of the gameplay to run through the adventure again. It might not be the drastic departure that some remakes are, but the Trials of Mana remake is a wonderful RPG palette cleanser for Mana newcomers and veterans alike.