Maybe it’s better to pass on this game.

I’ll be the first to admit that I genuinely do not care for playing soccer. Even back in elementary school I found myself trying to analyze which of my classmates would be the most optimal players, rather than kicking the ball myself. You could almost say I was trying to transform the sport into a strategy game. Ganbare! Soccer Strikers is pretty much the video game equivalent of this idea. But unfortunately, this game did not manage to make me care for soccer or its own gameplay.

Right off the bat, Ganbare! makes you design your main player and the team he’s playing for. The customization options are rather limited with only a male body and a handful of hair and facial features to choose from. From here it’s straight on to a practice match on the soccer-field. The game combines elements of a turn-based strategy game like Fire Emblem with the general gameplay of soccer. You control a team of six players while passing around the ball, avoiding tackles and scoring goals to win the game. The field is divided into a grid that allows you to select players and move them around. Each player can perform up to two actions during a turn. These can consist of movement, tackles, passes, dribbles or shots. Shots can be powered up with special abilities and properties. For example, you can use a shot that also has a freezing effect. immobilizing the opponent. This gives the teammates some nice variety and versatility besides acting as an attacker or defender. 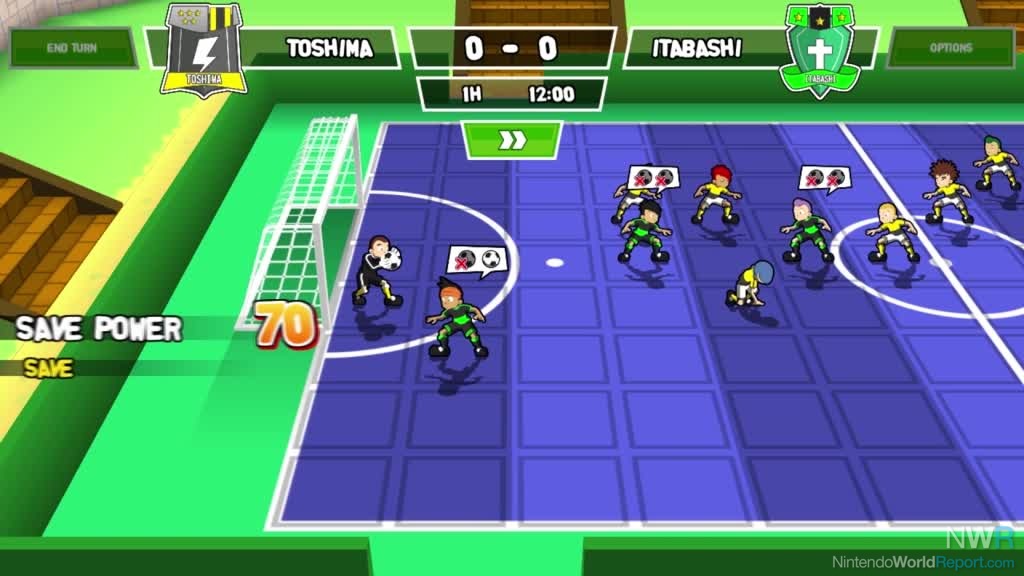 This sounds all well and good, but quickly things take a turn for the worse. Whenever the ball is passed, the game rolls a power number that decreases based on the distance of the pass. If the opponent has a higher number, the ball gets blocked and the turn transfers to the other player. While playing the game I often felt like I’ve had no control over these numbers or any of the player’s statistics. The shots that are performed truly feel random and left me scrambling to find other tactics to play against the opponent. This leaves matches dragging on for far too long, especially since you will be playing a first and second half. At the same time, the stamina meter for individual players decreases, meaning that they will move slower and roll lower numbers during their playing time. I found this to be rather frustrating, since a player I relied upon in the first half, dropped in usability in the second half and substitutions can only be performed at halftime. The game becomes frustrating, where tactics and movement are being underplayed by a slow random number generator. I know these mechanics are supposed to emulate realism, but as a tactician, the player isn’t rewarded for the effort put into coming up with a game plan.

But what makes me show this game a red card is its ugly visual design, convoluted UI and lackluster music. There is a single audio-loop during matches that becomes obnoxious and repetitive in less than a minute and you must listen to it for the entire duration of the game. The game is visually unappealing with all soccer fields looking similar. And I also need to vent my frustration about the chosen font. It’s at best reminiscent of Comic Sans and at worst incredibly hard to read. There is also no effort in trying to give the game or its characters any personality of its own. All the players on the field could be geometrical cubes and it wouldn’t have made a difference. The game feels so bland that there isn’t even that much to comment upon. There is nothing to pull you into the matches and the UI does a terrible job of explaining to the player what your options are.

The local multiplayer mode might be the only silver lining in this game. I feel that this would have been a decent way to play the game locally with a friend. Having to make slightly more tactical decisions and using special moves against a human opponent feels more fitting than rolling numbers against a CPU. However, I do think that even this mode would get dull rather quickly due to the limiting options in the strategy system that is available.

Overall Ganbare! Soccer Strikers isn’t the tactical soccer experience I was hoping for. There are many soccer games out there, with some fantastic characterization and design choices. I would forgive the visual style and lack of options if the strategy gameplay was fulfilling enough. But honestly, there is only a surface level of strategic options here that will keep players engaged for a long time. If you are picking this title up, be sure to play it with a friend to have some fun with it in the local multiplayer modes. But if you are looking for either a good soccer or a good RTS game, you unfortunately will not find it here.