Avenge with dozens of weapons, including swords, foam dart guns, plungers, and carrots, in this The Revenant-fueled action game.

Bloodroots is a game that artfully toes the line between brutal gore and playful cartoon violence. The vibrant animation and colorful world make the fact that you are a one-man killing machine— slicing, dicing, and destroying all comers—an easy pill to swallow. While the quick-retry gameplay evokes Hotline Miami, it does not bring the discomfort of that classic as this action game from Montreal-based Paper Cult truly does evoke the Tarantino aesthetic in its design and story. Bloodroots is simply delightful in its comic book-like provocative glee, staying fun throughout regardless of your skill level.

But aside from how Bloodroots navigates over-the-top violence, what impressed me the most was the versatility. The setup is simple: you’re Mr. Wolf. You were shot and left for dead. You’re mad as hell and it’s time for vengeance. Action is broken up into levels and arenas where the goal is to use any item possible to kill everyone. An axe? Chop, chop. A barrel? Roll into a few dudes. A carrot? Why not? More than 150 weapons are packed in, with a lot of them featuring special abilities and mechanics. 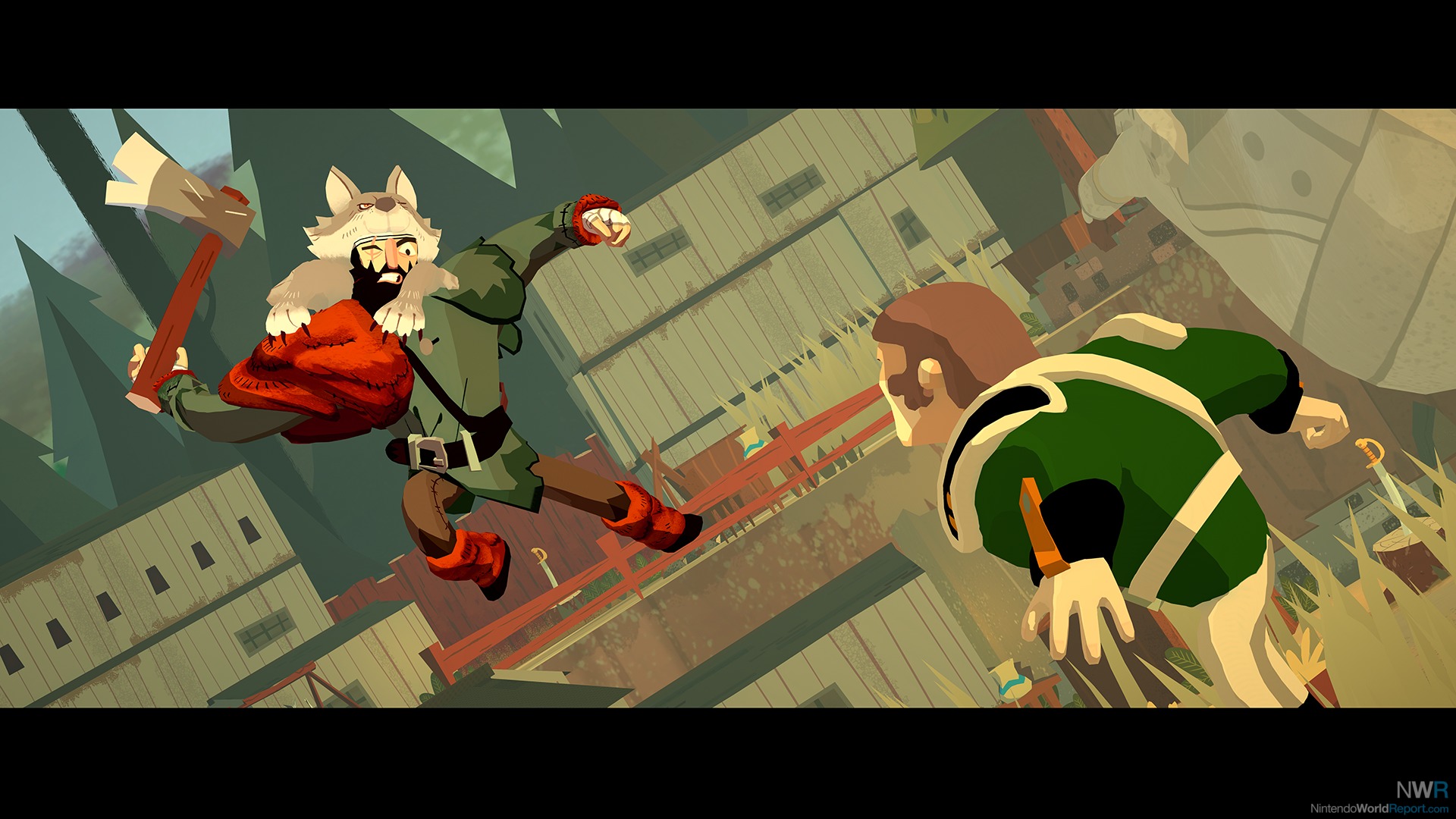 For example, you can wield a firecracker, which shoots off a short-range burst; however, it can also be used while jumping to aim the burst downward. A katana gives you a swift dash through a foe. A cannon launches you high into the air, allowing you to cannonball into the ground and knock out nearby foes. Each level can be a puzzle box, challenging you with the optimal, creative way to efficiently take out the enemies. And that’s where the versatility kicks into high gear. While a handful of levels are more guided, requiring specific weapons to be used to maneuver around, like say using an oar to pole vault and clear a wider gap, the majority are open-ended, with numerous paths and ways to clear out the crowd.

Bloodroots allows for multiple play styles. You can be driven for an immaculate high score, figuring out the ideal route through a level to keep your kill combo going. You can play it like I primarily did, messing around in each level to see what different weapons do and how the environment can be torn asunder. If the going gets too tough, though, you can pop open the menu and turn on invincibility to just romp through the mayhem. Online leaderboards do provide competition and ranks, but when all is said and done, Bloodroots doesn’t care if you’re good at the game or not; it just wants you to have a good time. 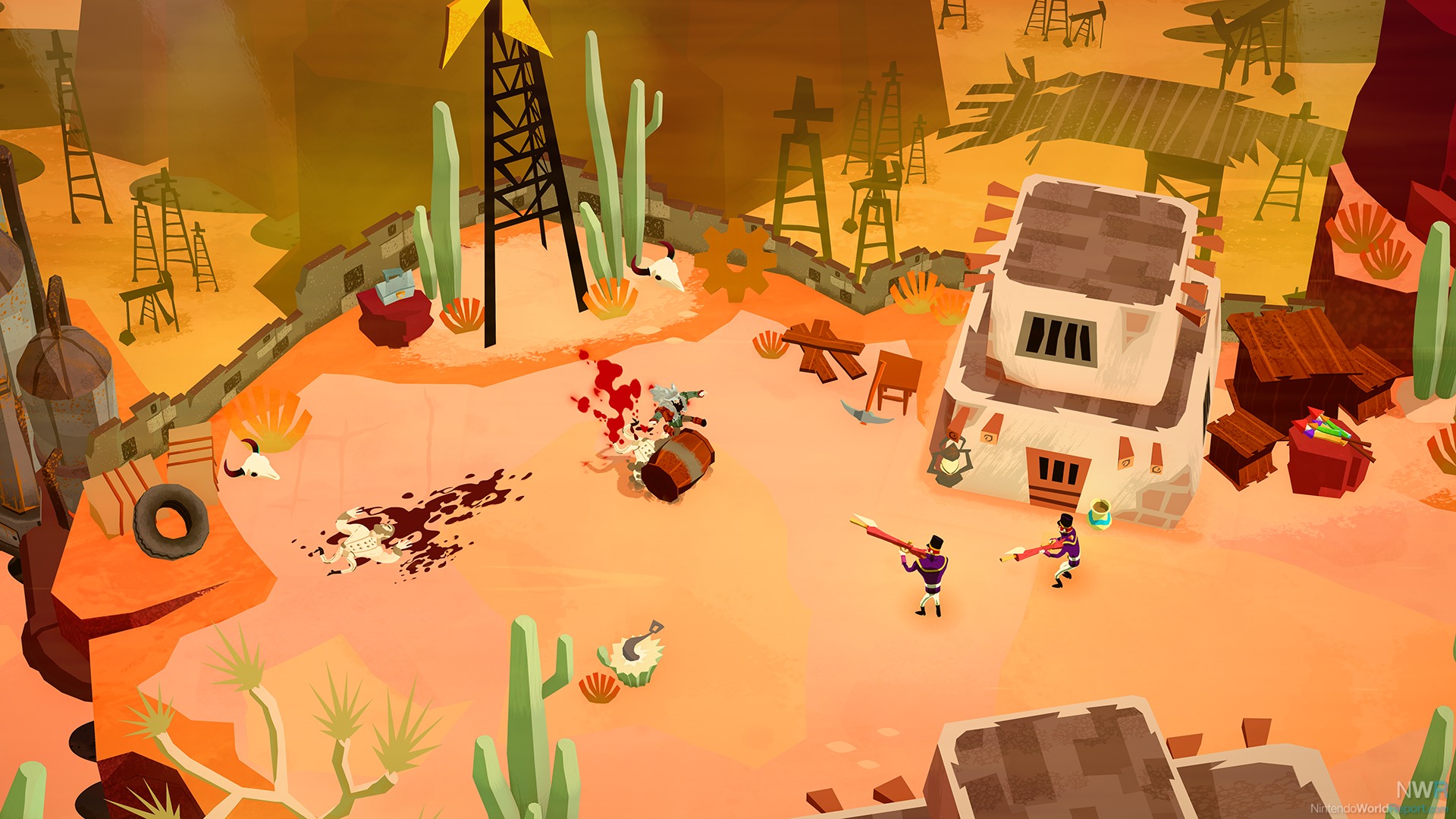 And for the majority of the fulfilling adventure, that’s what I did. Issues primarily crop up on a smaller screen, as the camera is usually pulled pretty far back so it’s often hard to judge precision, whether it’s picking up a particular weapon or taking down a specific enemy. I had a handful of deaths caused by what felt like mere millimeters, usually coming with more frequency on the smaller handheld screen. I grew to learn the nuances of these moments over time, but the problem never went away. If you’re gunning for high scores on the leaderboard, you might be better off playing on a TV. While the developer has promised a day-one patch, I also ran into some minor technical issues on Switch that would hinder my doling out destruction. My problems were all fixed by restarting the game, but I did lose a little bit of progress in the process. 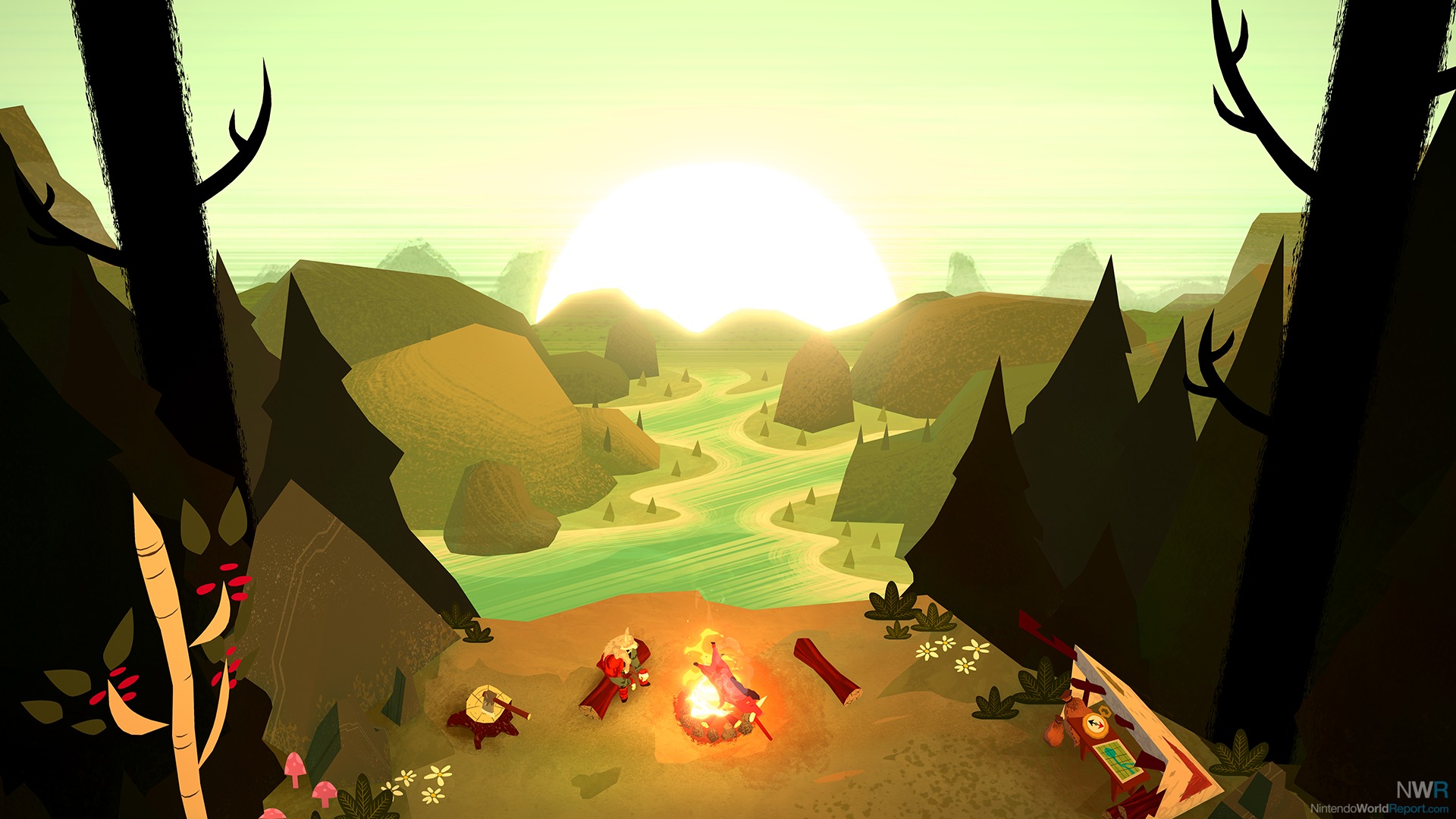 The story of Bloodroots is, as said before, primarily straightforward, but the flavor is delectable. Bosses are dripping with outrageous personality and thanks to the boisterous animation, even regular enemies pop with character. Even the way interstitials between levels fill in the back story and mysteries breathes life into this world. Having the conceit of Mr. Wolf returning to rest between levels at a campsite also fits well with the world and aesthetic. The campsite itself offers a nice respite between action, letting you customize your hat, more of which are unlocked through progression and which can be used to add helpful boosts when replaying levels (also accessed via the campsite).

You could sum up Bloodroots as a derivative of Hotline Miami, but the final product stands farther apart from that game. The weapon variety and depth gives different levels a distinct personality and the world itself offers a bombastic, naturalistic cartoony style. But what I keep coming back to as my favorite part of Bloodroots is its versatility. The action is ultimately easy to grasp, requiring only three buttons, but you can stylishly do so much with those base ideas thanks to the oodles of weapons and smartly designed levels. Paper Cult stuck the landing on this vibrantly violent game.