Running your own hospital has never been this on point.

The founders of Two Point Studios, the developer behind hospital management sim Two Point Hospital, have a pedigree that includes games like Black & White, Fable, and most notably, Theme Hospital. Originally released on PC in the summer of 2018, Two Point Hospital tasks you with designing and running your own hospital, including hiring staff, performing research, and making sure you have enough vending machines lining the halls. The simulation genre had typically been the domain of computer gaming, but we are seeing more and more of these types of games making their way to consoles, with varying degrees of success. I’m pleased to announce that the prognosis for Two Point Hospital is very much a positive one due to its addictive gameplay and well-designed UI and controls.

Anyone who has seen or played Theme Hospital will recognize the aesthetic and art style of the game, both of which contribute well to how cute and charming the overall experience is. The characters are a mix of cartoon and claymation that reminds me a little of Wallace and Gromit. There’s a radio station playing elevator-type music with enough variety that it helps to alleviate the repetitive nature of the gameplay. Announcements are made over the hospital’s speaker system that alert you to where doctors and nurses are needed so that you can ensure operations are running as smoothly as possible.

Patients enter your hospital with all kinds of made up hilarious ailments like Pandemic, where the patient’s head is stuck inside a pan, and Light Headed, where their head has literally changed into a light bulb. You need to make sure you’ve set up the appropriate facilities to tackle these conditions and many more. All the while, you also have to monitor the funds in your bank account since you’re responsible for paying your employees every month, in addition to all spending money on the furniture and rooms you’re plunking down. As you diagnose and eventually cure your patients, you’ll earn money to expand—adding a new wing perhaps?—and increase your reputation, bringing more patients through your doors and new opportunities. 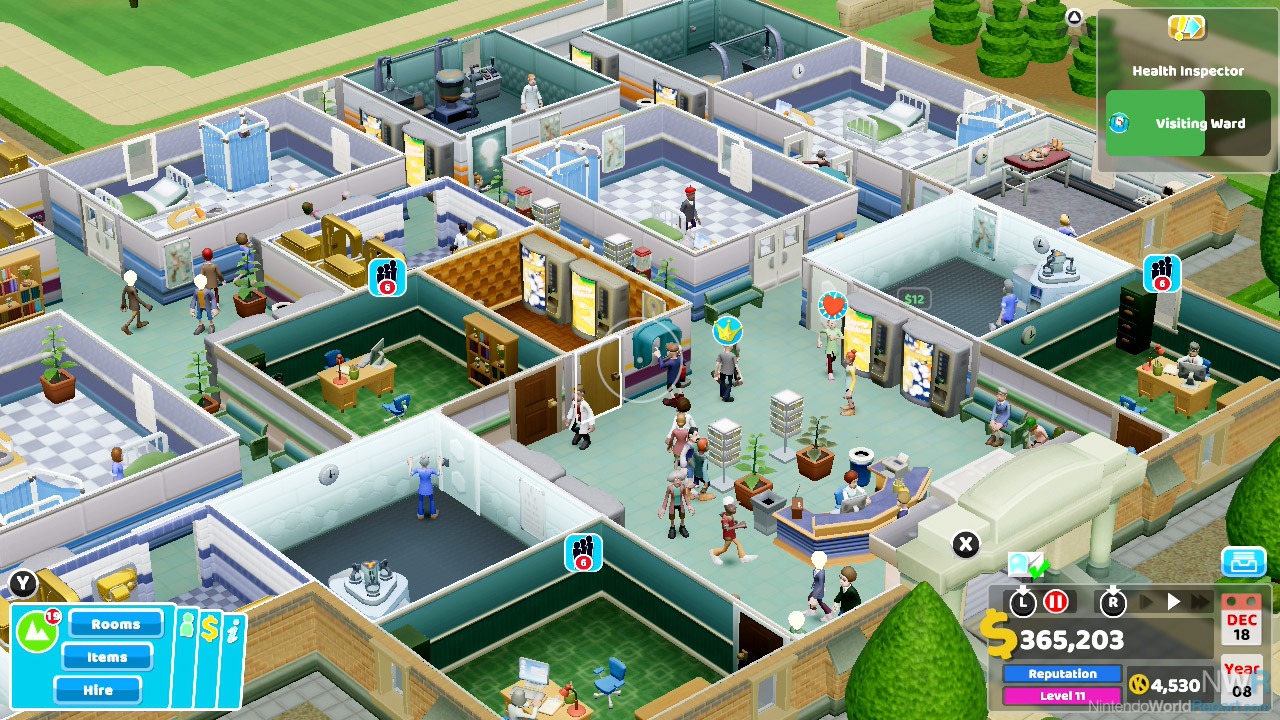 Special events and challenges pop up regularly, ranging from health inspections to mini-objectives like training a set number of employees within a 90-day period. You can pause the game at any time or choose from three different game speeds, with the fastest setting whipping through the days and months at a good pace. Earthquakes, temperature, and cleanliness are all elements you have to deal with; patients who die in your hospital can even come back to haunt your halls, and you’ll need specific janitors who ain’t afraid of no ghost to bust them. The sheer number of situations to encounter and factors to consider make every new hospital a puzzle in and of itself.

On the map screen, progression is marked by a three-star system, where you earn stars one at a time for completing specific objectives with a particular hospital. As you earn more stars, you unlock new hospitals on the map, but you can always return to previous hospitals with the new items and technology you unlock in later scenarios. If you’re aiming to achieve three stars for each hospital, it may be wise to move between hospitals when you get stuck or when progress is slow so that you can approach earlier ones again later with fresh eyes and new capabilities. Each new hospital, out of a total of 15, throws new challenges at you, and generally you’re tasked with juggling more balls as you progress deeper in the game. The first two DLC packs, Bigfoot and Pebberley Island, are included in the Switch version, with a third potentially on the way. The developer has also promised that two features already in the PC version, The Superbug Initiative and Sandbox Mode, will be added shortly after launch. I can see players spending dozens—if not hundreds—of hours with Two Point Hospital. I haven’t seen the battery low indicator pop up this regularly on my Switch! 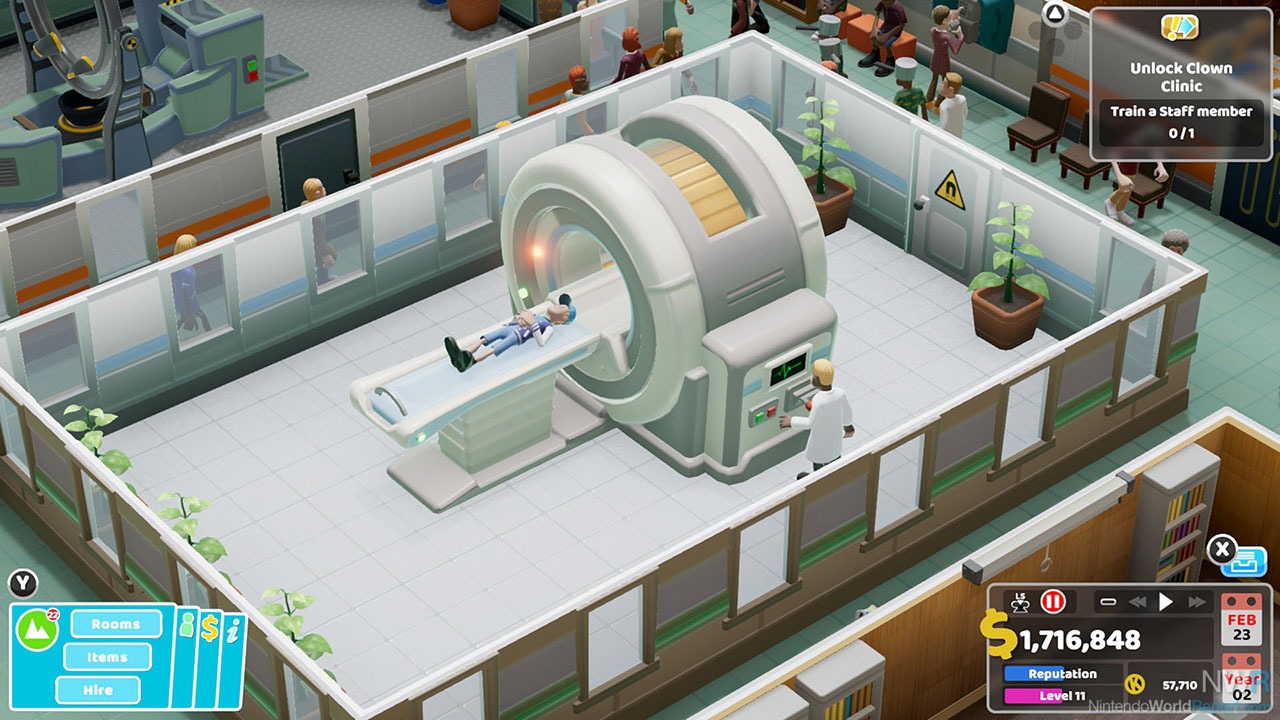 The controls and UI are worth detailing since they go a long way to making the game as playable and satisfying as it is. The right stick controls camera angle, while the left stick allows you to move the reticle around the screen. You can zoom in and out with the front shoulder buttons and rotate through items and list with the back ones. The real magic is that basically every button has a different function, and they all work together seamlessly after about 10-15 minutes of practice. Given just how much information and stats you can access, the flawless control scheme is even more impressive. The game tracks staff morale and energy; hospital profit and loss trends; and patient happiness and health, in addition to dozens of other metrics. You can adjust how long breaks last, how many staff can be on break at a time, and even the threshold for how certain your doctors and nurses have to be before they send a patient for treatment. The depth is immense, but I never found it overwhelming since the need for more minute tinkering builds up gradually.

The most attractive aspect of Two Point Hospital is its abundance of measurable and achievable objectives. It doesn’t overly rely on repetition or the ultimate goal of constructing the most efficient and most visually stunning hospital (of course, you have the option of pursuing it). You are always working on the set of tasks for each star level of a given hospital, but all the while you’re also building towards larger Career Goals, and accomplishing those rewards you with currency you can spend to unlock new items for your hospitals. Although I played a fair number of Sim games when I was younger, it’s not a genre I regularly commit to now. However, Two Point Hospital has cured that malaise with a bullet. It’s as addictive as it is satisfying, and the hours I’ve spent with it have melted away like the cares of my newly-cured patients. Whether you’ve been in a simulation game coma like me or living it up as your tycoon of choice, Two Point Hospital more than lives up to its forebears. Let’s add eight more points to that title.