A mostly excellent collection of NES and Famicom games, including some gems you’ve never seen in English before.

Double Dragon & Kunio-kun Retro Brawler Bundle is a mouthful of a title that bears explanation. This Switch collection of NES and Famicom games is made up of 18 entries in the Kunio-kun series, which is not that well known of a series outside of Japan, though it contains River City Ransom - a game you have probably heard of. Double Dragon is also likely a game you’ve heard of, hence why it’s the start of the English title. Additionally, throwing in the term “brawler” might even be a little misleading, as it only makes sense for about half of these games. The rest are a smattering of sports both familiar and weird. In general, this collection will be a journey of discovery for most western gamers, as only seven of the games ever came out in America to begin with. From a historical perspective, the Double Dragon & Kunio-kun Bundle is spectacular, and the improvements made to the games in this collection help make this assortment of okay-to-good games stand out in the best light possible.

The overall presentation is almost a carbon copy of Nintendo’s NES Classic and SNES Classic layout. Games can be sorted in a number of ways and each one has multiple save slots. In addition to the brand new localizations for 11 games, this package also adds some technical improvements and online play (where applicable). Some of the technical improvements involve fixing bugs and removing sprite flickering, making some of these system-pushing NES games play far better in 2020. However, if you really want to see Super Dodge Ball with its trademark slowdown, you can switch back to original mode. In-game achievements are also present that give you something extra to strive for while also netting you some flourishes to spruce up your online profile. 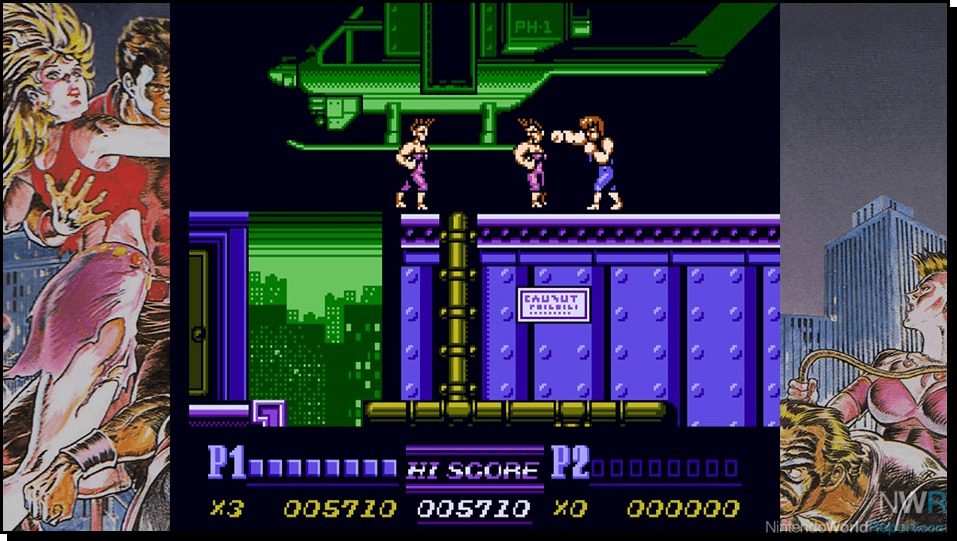 The other four games that were previously released in English are Renegade (1986), Super Dodge Ball (1988), River City Ransom (1989), and Crash’n the Boys Street Challenge (1992). Renegade is a really rough old beat-’em-up that is more interesting here because it’s the first of its kind. River City Ransom is a novel action RPG beat-’em-up that inspired many other similar games. While age might not have been as kind to River City Ransom, the technical improvements in this collection make it play the best it ever has. The same goes for Super Dodge Ball, which is far more enjoyable in its improved state. It’s worth noting both River City Ransom and Super Dodge Ball are available on Nintendo Switch Online, but both of the versions included in this collection are way better. Lastly, Crash’n the Boys Street Challenge rounds out the already-in-English lineup. It’s a weird game where you pick one of four teams to compete in events like Roof Top Jumping and 400 Meter Hurdles. The coolest thing about Crash’n the Boys in this collection is it is very easy to play it with four players. 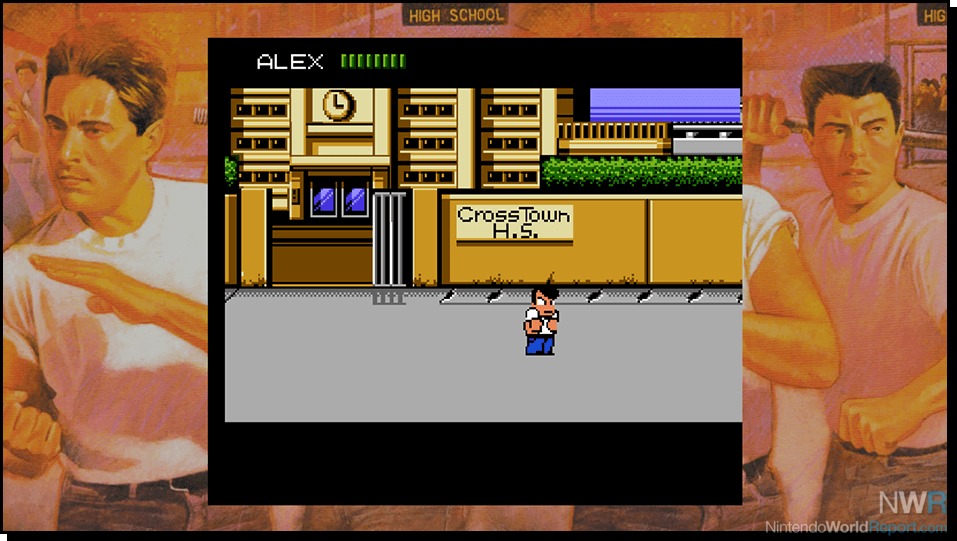 Out of the 11 remaining games, four of them are just the Japanese versions of Renegade, Super Dodge Ball, River City Ransom, and Crash’n the Boys. Some minor differences show up, but to the naked eye, you’re not going to notice major differences. It is cool that all of these versions exist, but ultimately superfluous. There is one other Japanese version of an English game here as well. Nekketsu High School Dodgeball Club – Soccer Story was released as Nintendo World Cup outside of Japan and well, it’s obvious why the Nintendo-branded soccer game didn’t wind up in another company’s collection. However, Soccer Story is largely a bad arcade soccer game, primarily because you only control one player on the whole field. It’s a shame, because the basic mechanics are simple and good; it’s just not all that fun.

So that leaves us with six games that are localized into English for the first time ever in this package. Two of them are follow-ups of sorts to earlier games, as Downtown Nekketsu March Super-Awesome Field Day! Is kind of a River City Ransom sequel with a structure similar to Crash’n the Boys and Kunio-kun’s Nekketsu Soccer League follows up Soccer Story. Super-Awesome Field Day! is nice as a bizarre four-player complement to Crash’n the Boys, giving this collection some serious legs in the nonsense olympics-like NES game genre. Soccer League improves on Soccer Story, but it still has oddities like only controlling a single player on the whole pitch. Once again, it sucks because the basic mechanics of Soccer League are simple and good.

The hidden gem in this collection is, without a doubt, Go-Go! Nekketsu Hockey Club Slip-and-Slide Madness, which can be simplified to Kunio-kun Ice Hockey. Unlike the soccer games, you can actually switch between players, which is great. Outside of that, it just has extremely polished arcade sport gameplay that’s easy to pick up but tough to master. It reminds me a lot of a more complex NES Ice Hockey that sort of walks the line between that Nintendo classic and Blades of Steel. 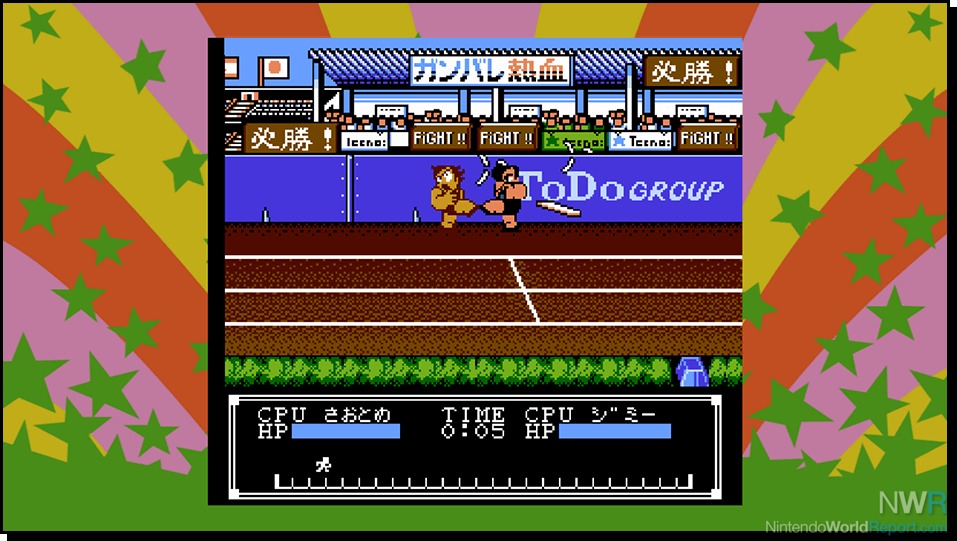 The other new-to-English-audiences sport game is Nekketsu! Street Basketball All-Out Dunk Heroes, which is a weird take on basketball. It involves a lot more combat - a staple of Kunio-kun sports - and also has multiple levels of baskets that are worth more points. Once I got a handle on its eccentricities, I had a good time with it, but I was hoping for something more akin to the ice hockey game for a more traditional basketball game. That being said, with the right group, this could be excellent, especially since it has four-player support.

The final two games are Nekketsu Fighting Legend and Downtown Special Kunio-kun’s Historical Period Drama! Fighting Legend is almost like a 2D Power Stone where you mostly have two-on-two arena fights using controls similar to River City Ransom. I had more fun with it with real people as opposed to the computers, which once again, the fact it’s a four-player game is rad. I had trouble wrapping my mind around Historical Period Drama, which is more or less a sequel to River City Ransom. If you're a fan of River City Ransom, it's absolute worthwhile making sense of Historical Period Drama. It's overall an ambitious sequel, but the difficulty of entry does highlight an issue with this collection. While each one walks you through the controls and special moves, it doesn’t really do a great job of telling you what the game is. I spent a lot of time with the new-to-me games just trying to figure them out.

All in all, Double Dragon & Kunio-kun Retro Brawler Bundle is a thing I’m glad exists, even if maybe not every game is a winner. It’s a nice way to revisit a beloved and long-running NES series that saw roughly half of its releases even make it to America. The various online and technical flourishes make them all play the best they ever have. It’s awesome playing Super Dodge Ball not as it was, but more like I remember it. There are added legs to wacky multiplayer games like Super-Awesome Field Day! and All-Out Dunk Heroes with local and online four-player support. Also the ice hockey game is legit fantastic. Lastly, the handful of games localized into English for the first time are wonderful to experience, regardless of their overall quality. This Kunio-kun collection might not be the best or even most necessary retro compilation, but it’s a damn good one that I’m thrilled to see out in the west.