A wonderful collection of Mega Man off-shoots that deserves your attention.

The Blue Bomber has seen his fair share of spin-off titles from the classic series. Mega Man X remains a masterclass in action-platforming to this day, and it actually informs much of the lore for the games in the Mega Man Zero/ZX Legacy Collection. While X is closer to classic Mega Man, the Zero and ZX games—originally on GBA and DS, respectively—⁠are generally less stage-based and more exploration and progression focused. Coming to these two series more or less for the first time, I was at times pleasantly surprised but also a little disappointed initially by how different they are from the Mega Man titles that came before them. That said, after spending more time with the whole compilation, I started to appreciate the way that the Zero and ZX series carve out their own niche in the Mega Man universe.

The Mega Man Zero games are set years after the events of the Mega Man X series and revolve around Zero, who is considered a legendary hero and is sought after to aid in the war against Neo Arcadia. As you might expect, characters you encounter in the first game appear and reappear in later titles, giving the Zero games a satisfying sense of cohesion. Enemies you might have thought defeated rise up to challenge or impede you, and familiar allies, like resistance leader Ciel, continue to rely on you for help. The individual plot lines and the overarching narrative are much more pronounced compared to the classic Mega Man and early entries in the X series, but it’s the action and challenge that really deliver. 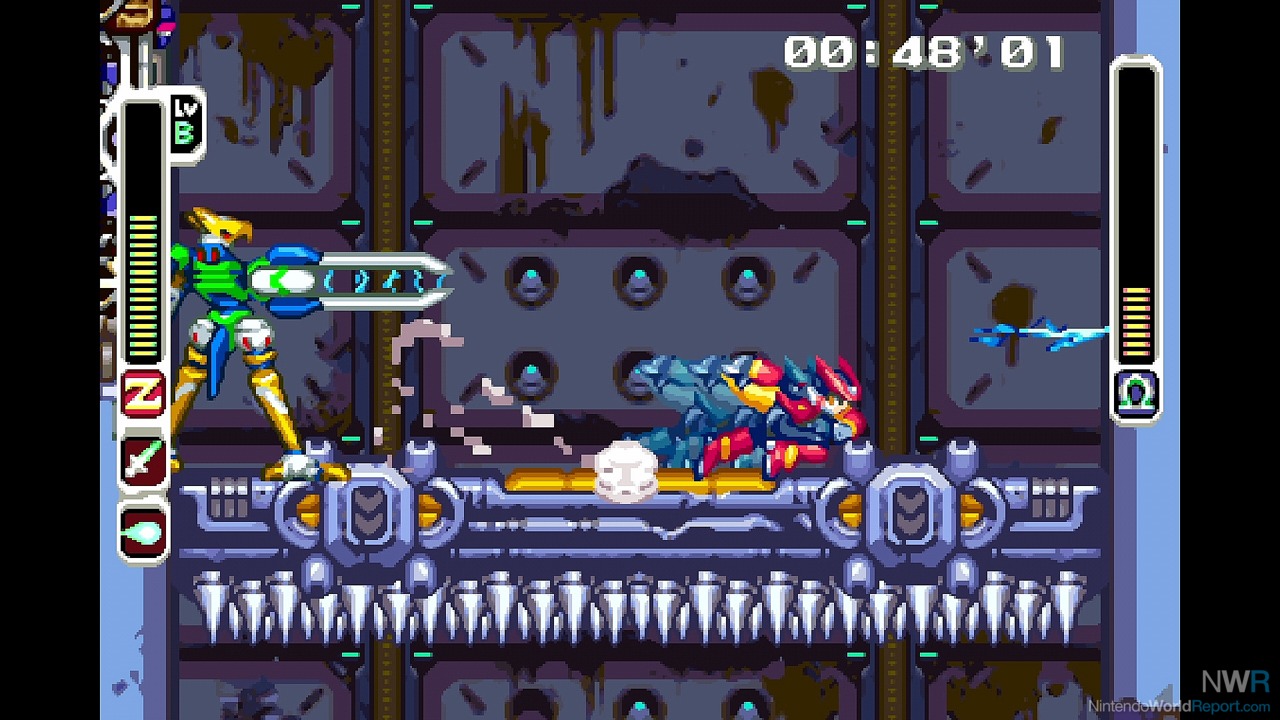 In terms of gameplay, you won’t find the typical Hollywood Squares of robot masters to select from; instead, the first Zero game features a mission-based structure where you choose from a selection of tasks given by Ciel that warp you to a particular location. The second, third, and fourth games do use a more traditional structure whereby you select a particular boss and its associated level and mission. Between stages, you can explore a base with a variety of NPCs who can give you items or hints. Another new mechanic is Cyber Elves, who can be activated to bestow temporary or permanent buffs, such as increased health. They require E-Crystals, which you collect from defeated enemies or find hidden in the levels, to power up, but using a Cyber Elf can reduce your score and they die after one use. Playing as Zero, you are equipped with a standard buster that can be imbued with an elemental power and a variety of other weapons, like a sword and a shield boomerang.

Mega Man Zero is known for its difficulty, and it continues to live up to that reputation. Boss fights can be incredibly tough, and even regular enemies seem to cause a ton of damage. Fortunately, there are a couple interesting options in the Collection’s main menu that can make the games more accessible. First, Save-Assist populates each stage with a generous number of checkpoints that you respawn at after death. There’s always a checkpoint placed outside of a boss room, too, which can really come in handy. The second option is Casual Scenario Mode, and this one allows you to focus on the story by powering up your character and removing instant death. Both options are also available in the two ZX games. 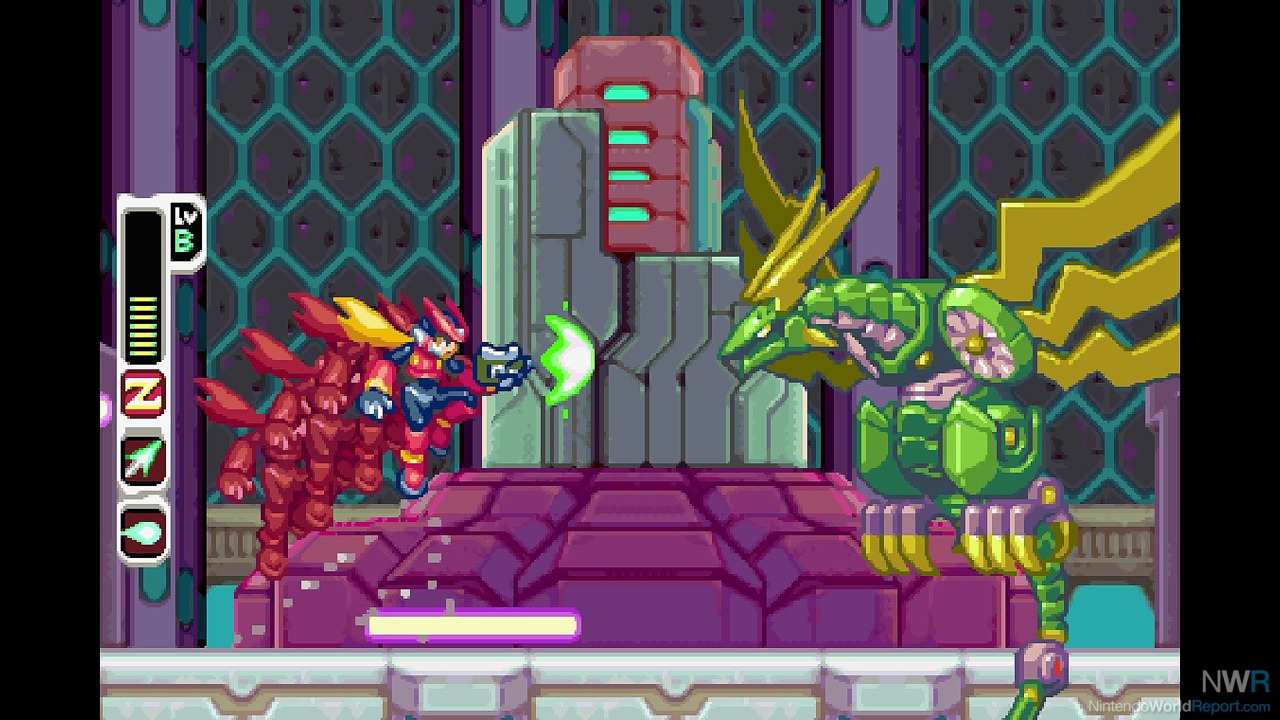 Mega Man ZX and ZX Advent titles feel like Metroidvanias in that they have a sprawling map and teleport points you can warp to and from. They take place after the Zero series and feature human characters, a boy and a girl (whom you choose at the outset), who gain the ability to transform into Mega Man-like robots with different powers. In ZX, as you defeat bosses and progress through the game, you collect Biometals that unlock new suits with different attacks and abilities. For instance, one of these biometal models allows you to glide through water and create platforms of ice to step on. In Advent, you can even transform into specific boss machines after defeating them, and you use their powers to access new areas and turn your enemies into scrap metal. While there is a fair bit of backtracking, you don’t have to grind for currency to upgrade yourself; rather, you’ll acquire familiar life increases and Sub Tanks.

With even more characters and environments to explore, ZX and Advent are certainly longer and different from the Zero games, but they are also decidedly less challenging as well. Being that they are DS games, there is a second screen that is mostly used as a map, and it can be repositioned through the Collection’s options menu. The level variety is much more pronounced given the expanded size of the world, and it was also interesting to enter a new area that would look and feel at times like a unique biome. I think it’s these two games that really make the package special, in particular since there was already a Mega Man Zero Collection on DS. The map and exploration overall are greatly improved in Advent, too, and it just feels like much more of an interesting sequel compared to any of the Zero games. 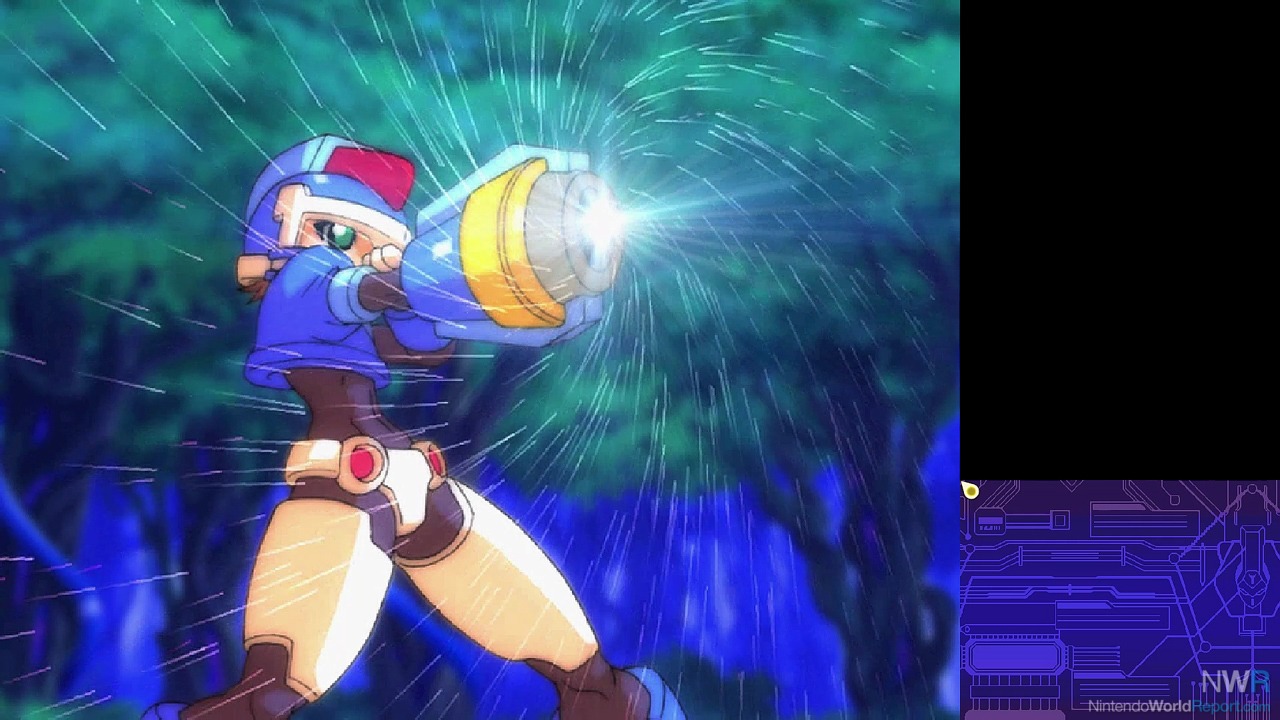 Rounding out the package are some neat extras, such as the new Z Chaser mode for both sets of games, which is a time trial mode with online leaderboards and two-player versus. You can adjust the controls prior to starting a race and see the progress of a ghost opponent at the bottom of the screen. There are 37 achievements, Japanese and English versions of each game, a gallery, and a music player. As someone who has reviewed a half-dozen collection over the last 12 months, I can safely say that the Mega Man Zero/ZX Legacy Collection has absolutely been given that TLC that really takes it from a bundle of individual games to a meaningful compilation.

Fans of the jump-and-shoot variety need to set their sights on the Mega Man Zero/ZX Legacy Collection. It is a definitive package of lesser known Mega Man games that stand on their own as satisfying and legitimate experiences. If you already like them, this is the best way to own all six or catch up with entries you may have missed; if you grew up with Mega Man 2 and Mega Man X, like I did, you might be surprised just how enjoyable the Zero and ZX games can be. Accessibility options and plenty of extras only make the whole proposition that much more enticing. The focus on progression, exploration, and combat over traditional platforming turn out to be a breath of fresh Air-Man, and unlockable difficulties and achievements really turn up the Heat-Man. Dip into your Sub Tanks if you must, but Mega Man Zero/ZX Legacy Collection is one of the first must-own titles of 2020.