To The Moon (Switch) Review

An emotional narrative experience that leaves a thought-provoking mark.

Every once in a while we encounter a story so powerful that it transforms the way we see the world. Or maybe it pushes us to finally make a significant change in our lives. To The Moon is one such catalyst, as likely to leave you in tears as it is to elicit an epiphany. This narrative-focused 2D adventure game follows Dr. Eva Rosalene and Dr. Neil Watts, who work to give end-of-life patients a chance to relive their life over again, but only inside their head. As with all story-heavy experiences, so much of the joy is in discovering the plot and characters for oneself. To that end, I can safely say that everything you’ve heard about this almost 10-year-old title is true, so just go and play it for yourself. If you’re coming to it fresh, however, here are my detailed and spoiler-free thoughts.

The story begins with the doctors crashing their car about 100 steps away from the house of their latest client, Johnny, an old man who is not long for this world. As Eva and Neil walk up to the house, you’re treated to their witty and snappy banter, which persists throughout To The Moon’s approximately four-hour runtime. The writing is filled with video game and pop culture references as well, which makes it even more endearing. It’s worth mentioning here that the tone shifts a fair bit, though, maybe even a little too much. One scene might play out with light horror, while the next is bitter sadness. Fortunately, all of this is supported wonderfully by a memorable and evocative soundtrack.

Johnny’s dying wish is, as you might expect, to go to the moon, but your real task is to uncover the motivations behind that request. As Eva and Neil, you use a machine to enter Johnny’s memories and retrace the steps of his memories, starting from the most recent and going all the way back to his childhood. Each time period of his life plays out over a brief vignette where you seek out brief interactions between Johnny and other characters. You also collect items that let you unlock a memento so that you can move to the next memory. Before moving to the next memory, you play a brief tile swapping mini-game, but it felt like a needless distraction. If ever you feel tired of these more monotonous segments, don’t worry; the screen regularly goes fully white during transitions, which I found blinding before turning down my Switch’s brightness setting. 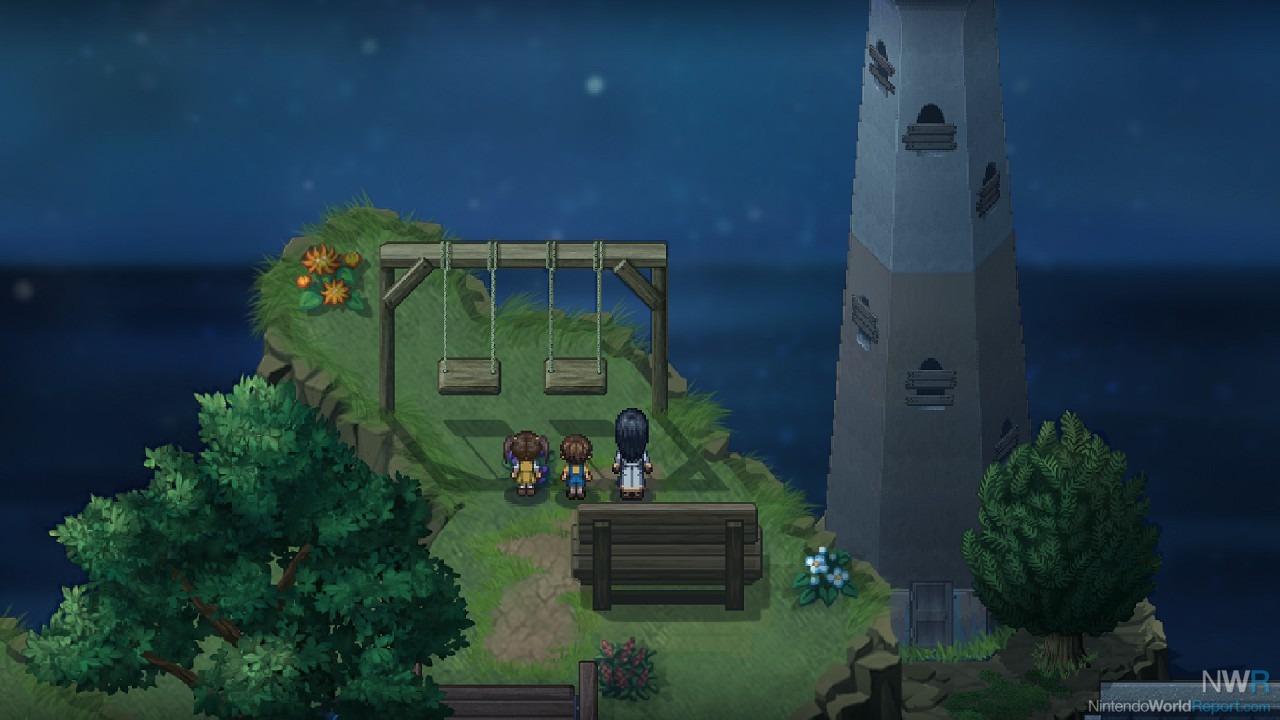 One nagging issue with To The Moon is that the gameplay doesn’t always contribute to the story in a meaningful way. The very limited exploration and interaction in each memory move the story forward, but they aren’t engaging in the way that the overall plot is. It would have been nice to see more decision-making, for example, as a way of increasing player agency. Instead, the slow walking speed and cumbersome navigation hinder rather than heighten the experience.

Created using the RPG Maker XP, To The Moon is a masterclass in storytelling and creating emotional impact. The beautiful soundtrack imbues Johnny’s memories with tension and melancholy, but there is some tonal dissonance, especially during the first half of the game, that’s hard to reconcile. The gameplay itself does little to justify its existence, but it doesn’t detract in a major way from how potent the narrative is and how overwhelming the conclusion is. Much like how I collapsed into my chair as the final credits rolled, the game actually crashes before the single post-credits scene, and it also froze on me once as well. These are unfortunate technical issues that frustrate but are worth coping with. To The Moon tells a must-read story, but as a game it’s not without its flaws.