It’s time for the SaGa series to get the recognition it deserves.

Last month, Square surprisingly released a port of a 25-year-old Super Nintendo game that had previously never left Japan. To our delight, Romancing SaGa 3 turned out to be a joy, a hidden gem that fans of retro RPGs are sure to enjoy. Riding on the momentum of a newfound appreciation for Akitoshi Kawazu, I had the opportunity to review another recent SaGa title that had also never left Japan until now. Although Scarlet Grace might be a much different experience than what most Kawazu fans are used to, it still has all of the charm and idiosyncrasies one would expect from a SaGa game and delivers them in a very entertaining fashion. 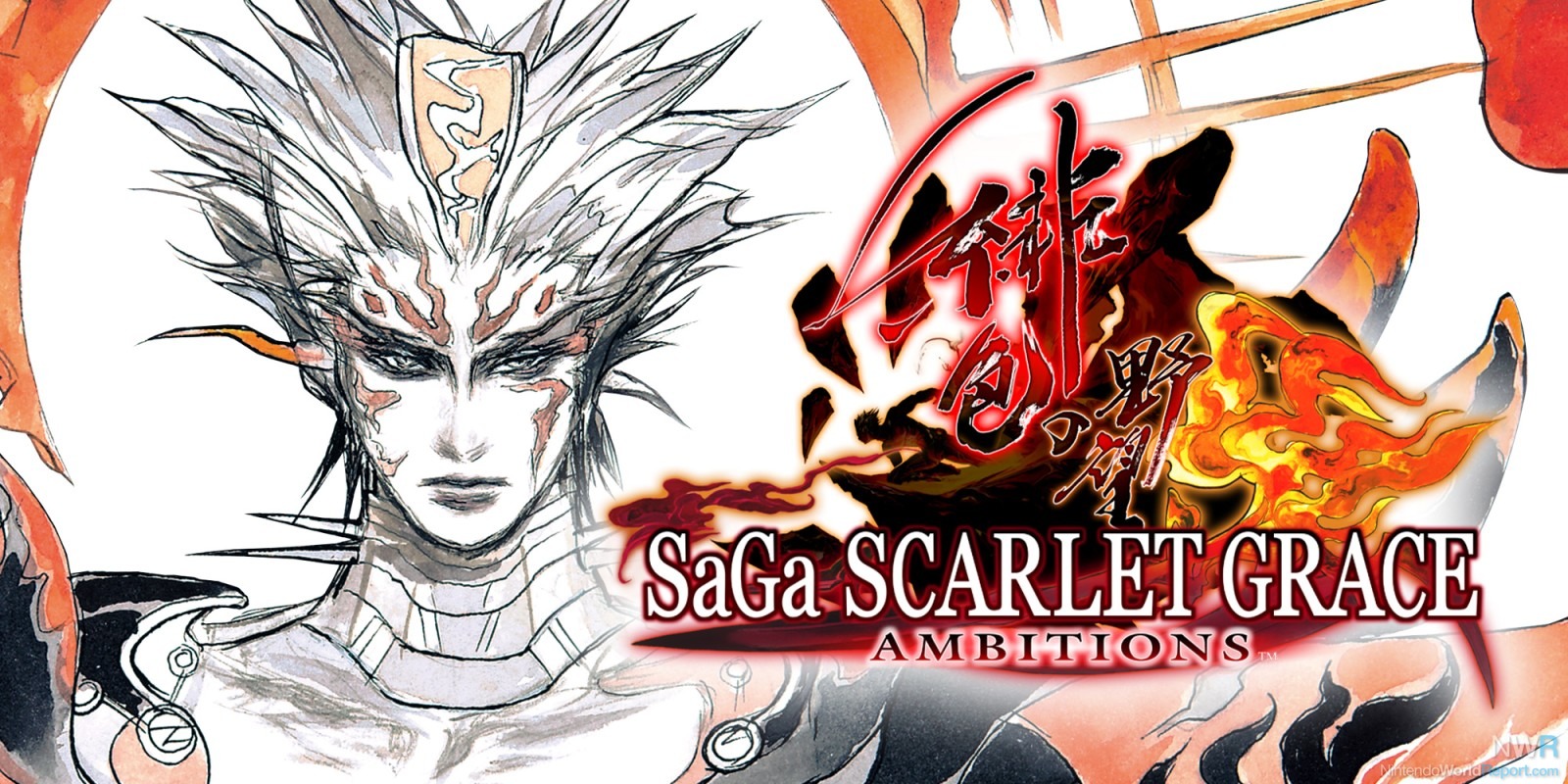 When the topic of SaGa games comes up in conversation, a number of different mechanics and gameplay features are forever linked with the series: Asymmetrical leveling up, random occurrences in battle, open-ended exploration, and utterly complex battle systems that require a fair deal of experience to learn. SaGa: Scarlet Grace - Ambitions has all of these elements, and yet still manages to look and feel much different from previous entries.

The differences begin right away as Scarlet Grace does away with the traditional JRPG isometric town exploration and instead focuses on a more curated story experience presented in a visual novel format. Either through a questionnaire, or simply by choice, one of four main characters are chosen to start your adventure. Each of the four protagonists—Uprina, Taria, Leonard, and Balmaint—has a separate storyline that takes place across a sprawling shared world. The heroes all have different goals and challenges to overcome, and their own cast of characters to help them to do so. Instead of travelling to towns and discovering what to do from townsfolk, the wandering parties walk across a world map with the different locations appearing on screen. The world is divided up into provinces, each typically having around 10 or so different locations to enter. Once an area is chosen, instead of entering the location and walking around, a conversation begins in the style of a visual novel which may or may not have dialogue options and often concludes with a battle.

The amount of time spent engaging with characters in the world is relatively small compared to the amount of time spent in combat, but each of those interactions feels impactful and memorable. The dialogue is terrific, and the seriousness of each storyline is constantly contrasted with a delightful levity that keeps you wondering what will happen next. Whether it’s a former churro vendor who becomes an apostle, or a weirdo hanging out by himself in a forsaken forest, an engaging and captivating story beat keeps you constantly engrossed in the events. 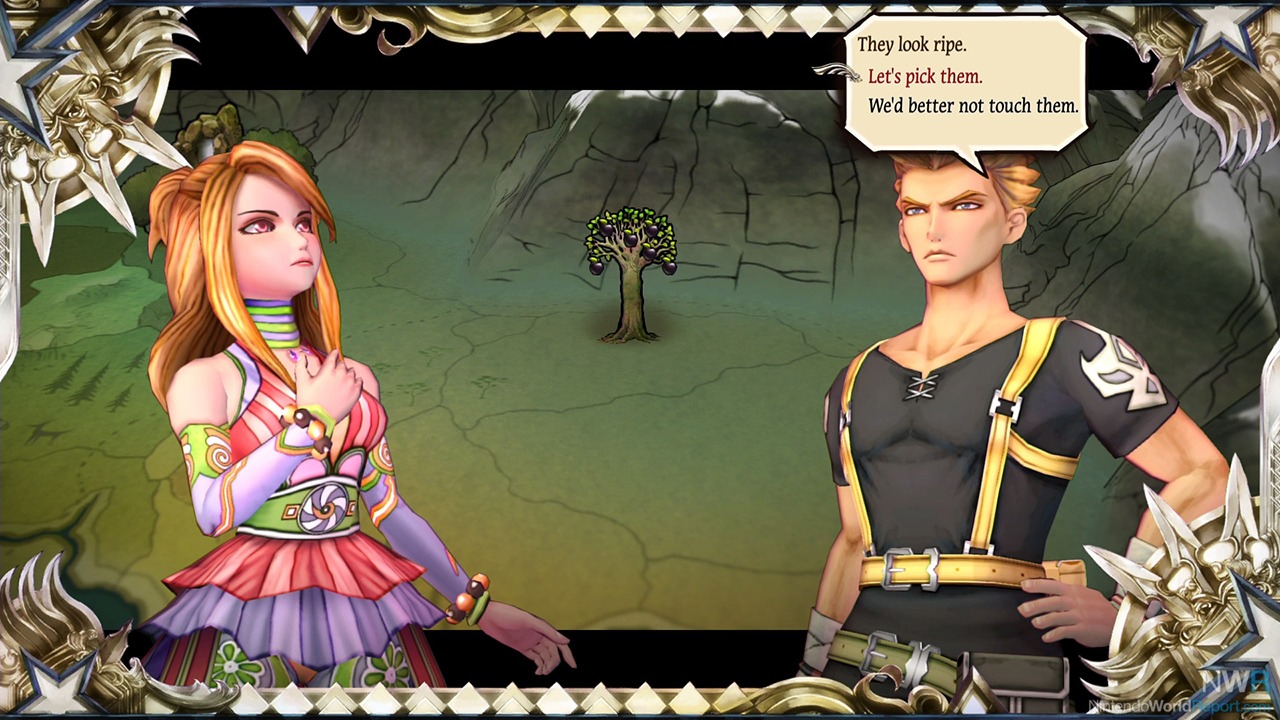 Interesting dialogue aside, the majority of the time spent in Scarlet Grace is with a combat system that takes a little bit of time to get a handle on. Just like most SaGa titles, the combat has layers upon layers of systems to track and master, and endless ways to customize your party. At the beginning of a battle, five members of your party are chosen to participate, and the formation in which they stand will impact how the battle will play out. Each character's actions have a cost which is represented by a number of stars, and the initial number of stars and the way they increase per turn is based upon the formation chosen.

In battle, all of the characters, whether friend or foe, are shown on a timeline in the order in which they’ll attack. At the beginning of the turn, the number of stars is then allocated to the actions selected, with the stronger attacks requiring a larger allocation of stars. As the battles wear on, the number of stars to allocate grows, further complicating the amount of strategy that goes into a battle. Even the placement of the characters in the timeline has a profound effect on the outcome of a battle. When a character is defeated, good or bad, they are removed from the timeline and if members of a party combine in the timeline they unleash a devastating united attack. This united attack has the dual effect of landing a powerful blow but also reducing the stars needed for attacks in the next turn.

In true SaGa fashion, new moves are learned at random and are based on a character’s equipment. This equipment can either be purchased in various locations or earned in various quests during your adventure. Countless variations of attack styles can be formulated based on the party members you choose as most parties have a number of different style combatants. A mix and match of brawlers, mages, archers, and warriors allows for strategies that range from a quick all-out attack to a slow and methodical wearing down of your opponents. The only part of the combat that doesn’t manage to stay fresh is the music, which unfortunately does feel stale based on the countless hours you could easily put into Scarlet Grace.

It’s safe to say that SaGa: Scarlet Grace - Ambitions does everything that fans of the series have grown to love over the years. It manages to stay faithful to the spirit of SaGa but wraps it in a package that looks great and feels like a fresh take on the formula. What may be surprising to both new and old fans alike is just how much time is spent in combat. All of the terrific dialogue and interactions between characters is gated behind hours of complex combat mechanics and some difficult battles. The time commitment is definitely worth it, but just make sure you’re ready for the trademark Kawazu punishment that you’ll inevitably experience.