I’ve been enamored with J.R.R. Tolkien’s work ever since being a young teenager (yes, even the old Rankin/Bass animated version of The Hobbit), so I’m already an easy mark for the Lord of the Rings: Adventure Card Game, which uses the now widely-known landscape of Middle-Earth as its canvas. The premise is simple – you, the deck wielder, act akin to a general directing your forces on the field against the armies of Sauron from spiders to wolves and beyond. Given that most of my trading card game experience has been in Magic: The Gathering, I may use that as my point of reference throughout. Apologies in advance.

You’d be forgiven in mistaking this for a straight rip-off of its contemporaries like Hearthstone. Matches work in a similar rhythm. There is no mana in-game, rather you use your turn to summon a creature, affix accessories like weapons or shields to those creatures, sorcery like cards that have a one-time effect, or direct a creature to attack or take an action. Each action takes a turn, allowing Sauron to then take a similar action. So where in Magic you’re afforded as many actions as your mana pool allows in a turn, each action here counts as your turn. The round ends once you and Sauron have run out of actions to take, and a new one starts with resetting ground forces and a fresh set of cards in hand. 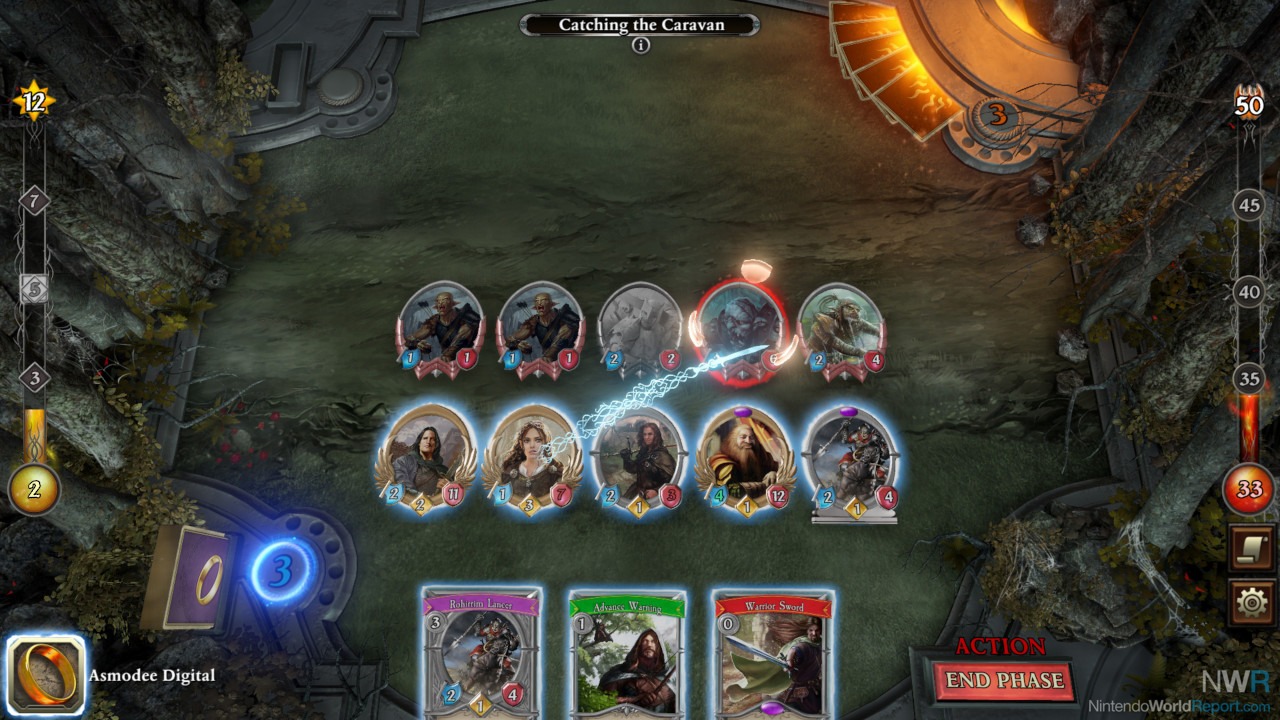 Lord of the Rings emphasizes the “Adventure Card Game” in its title, as the meat of the experience is in its single player mode. Through it, each mission begins with a vignette describing your fellowship’s predicament with a narration that is somewhere between the hokier animated Lord of the Ring film and the fantastic film trilogy, varying between laughably bad and decent anagram of the latter. Also inconsistent and sometimes lacking is the UI. Text on cards can be difficult to read on screen without squinting. The main menu’s format looks something akin to the Smash Bros menu, large buttons that don’t always feel like the direction you’re choosing moves your cursor to the right menu option. And in-match, selection of cards to read or play, or choosing to end a turn never feel quite as smooth as a Hearthstone match. That said, the artwork is faithful to the style inherent throughout Tolkien’s works, which I found pleasing.

Missions are structured as multi-step battles, with each section having an objective (one early mission includes three separate rounds of fending off attacks from wolves, the goal being to defeat several of them). Each phase of a mission doesn’t refresh your health or status, meaning if you have a round with particularly bad losses, you carry over that bad situation into a more dire skirmish. It’s an interesting approach that sometimes fells too punitive and made me inclined to just start a mission over mid-stream if it became clear I wouldn’t have the resources to complete the objective. Beyond that, the matches themselves are quite fun, and the objective-based mission structure adds a bit of variety to this card game in ways that your typical Magic match wouldn’t.

Lord of the Rings: The Adventure Card Game is charming, if stunted by some inconsistent voice acting and less polished user interface. While some might have wished for player-versus-player options included, the single-player focus allows the card game to hone-in on its core strength – engaging narrated storytelling tied into a solid card game foundation. If you are a lone ring bearer rather than part of a fellowship, this could be a precious experience to you.