A familiar alchemy recipe with some fun and fresh changes.

While I played through each of the previous Atelier games, I never found any of them to be must-plays. That’s not to say that they didn't have merit, but they were extremely daunting with their design choices. Systems upon systems were thrown into the mix and flattened my interest quickly. So when I was asked if I had an interest in trying out the new Atelier Ryza: Ever Darkness & the Secret Hideout, I was quite reluctant to do so. Ryza, however, is a new starting point for the series, meaning I could get into it without being overly lost. With that in mind, I played through Atelier Ryza and was hoping that there was something for me there. The answer, as it turns out, was quite surprising. As a matter of fact, I would call Ryza my favorite RPG of 2019.

The changes within this Atelier installment are felt within the opening hour. Players hop into the shoes of Reisalin Stout, nicknamed Ryza by her friends. Unlike the previous games in the series, this protagonist is not an experienced alchemist. In fact, she has never heard of alchemy until the concept is brought up to her. Ryza is much more of an adventurer who wants to see the world, which changes the entire dynamic of the game. She and her friends want to escape Kurken Island to see the world. Once the party finds an abandoned boat, they see their chance and quickly meet experienced adventurers that will help them along their way. 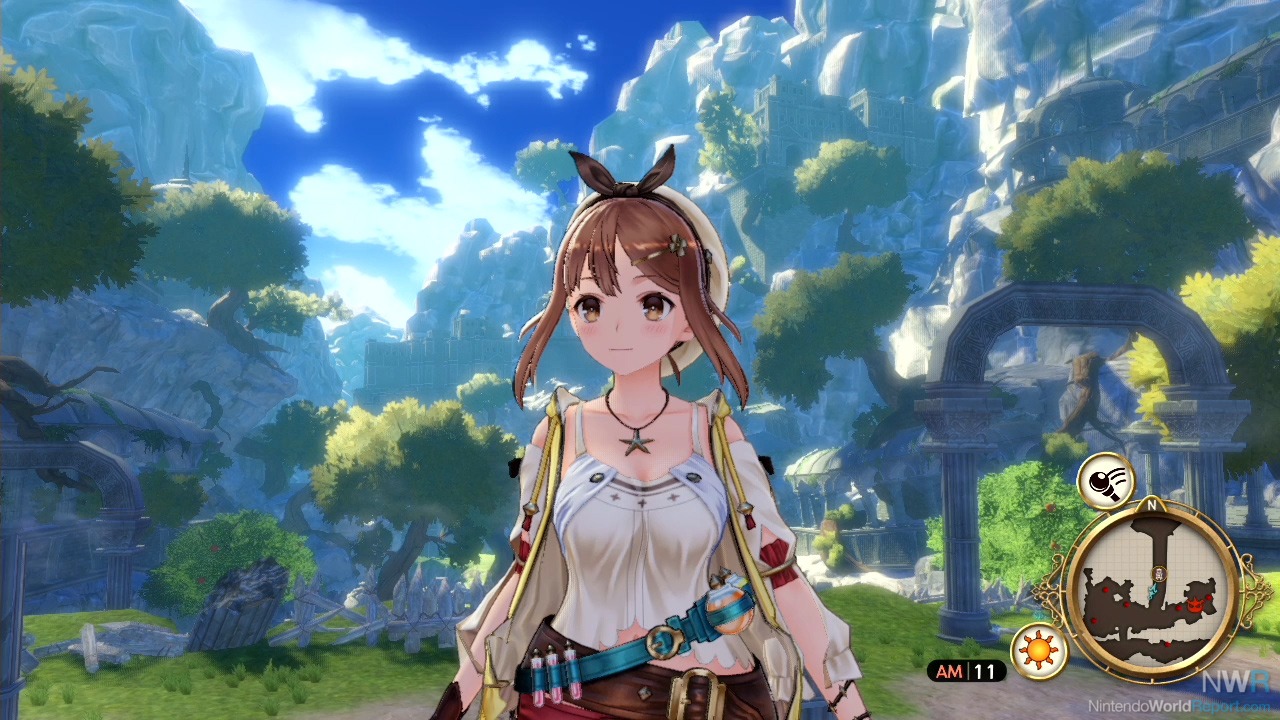 My problem with the previous games is that actual story progression didn't come very naturally. The characters were already established, and we had to deal with the consequences of that. Ryza and her friends Lent and Toa are much more blank slates who become curious as they see more of the world. Ryza has to learn to love alchemy, while Lent learns the ropes of being a well-trained fighter. They are excitable and charming as it’s clear they lived carefree lives before setting off. The outside world is new to them, and the adventure sees them grow into new roles within their party. Every time new story beats got introduced, I honestly got excited as it progressed the evolution of their lives as adventurers. Ryza doesn't come off as being as ''by the book'' as previous protagonists, which made the atmosphere feel very unique. The characters of Aterlier Ryza are easily some of the most well structured people in an RPG setting this year.

Where Ryza really shines is in its atmosphere. The Atelier series isn't known for having huge stakes, and that is certainly the case here. The journey is much more about finding your place in the world and moving away from your past. Although the characters do show shades of darkness, the story focuses on their positive elements. They are delightful as they explore towns, interact with NPCs and take on the next challenge. The world is quite a big one, with plenty of fun locations to uncover. The things you can do within those boundaries are much better and combine with tasks having more variables to them. Ryza is quite a resourceful character and can make tools simply to collect more items in the environments.

The attention and care carries on when it comes to the gameplay. The flow of combat is really fantastic as Atelier Ryza takes the approach of the Final Fantasy titles. The previous games were straight up turn-based affairs, but this new game implements a real-time system where the battle is constantly moving. The player is in control of selecting character actions and ensuring that everyone gets their attacks in. In the initial moments, it is important to perform your standard attacks and fill up an Action Points gauge. AP is needed to perform skills and special attacks and forms a single pool for the entire party. You can't simply throw your points at a problem and see if it all works out. In addition, by building up AP, your Tactics Level will slowly start to grow. Increasing its level gives you access to stronger attacks that can give you an edge in battle. 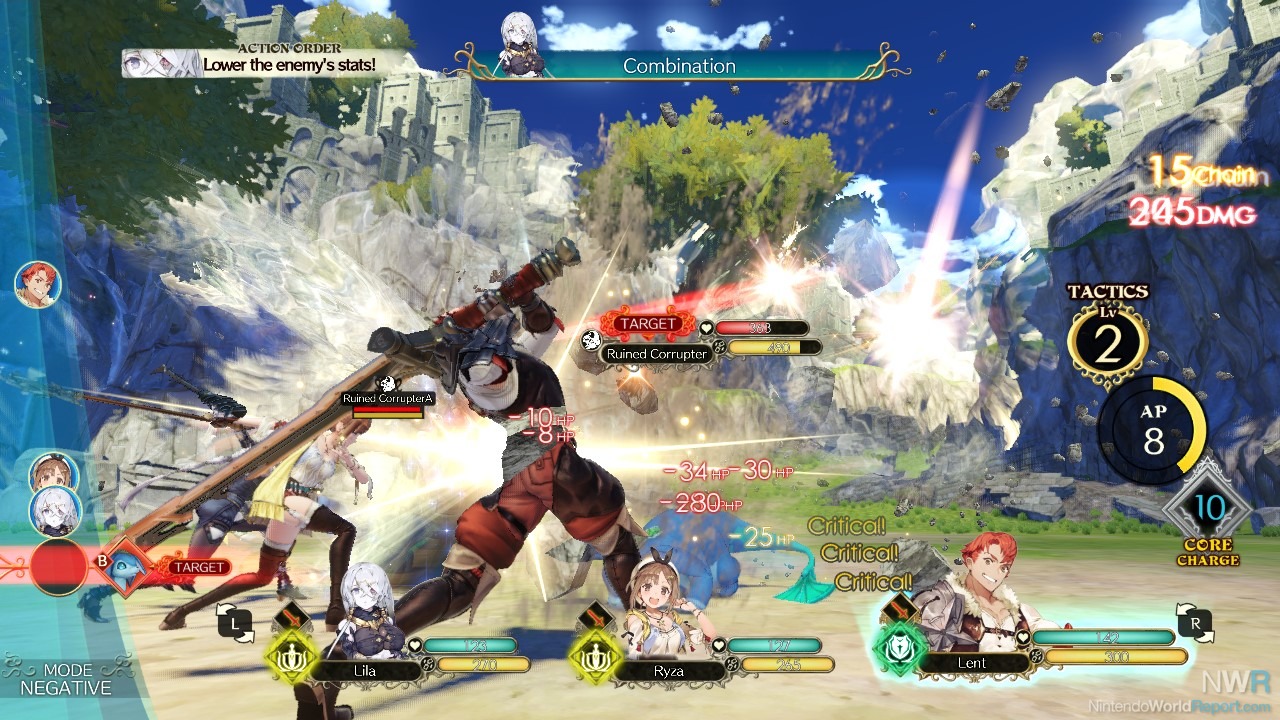 Due to the shift towards an active battle system, you won't be able to control all of the characters at once. By focusing on one character, you make the best of their moves and abilities and really explore what they can do. The other party members will be controlled by the AI, giving you plenty of time to explore every option. Once you're acclimated, you can quickly shift between characters and use the Action Points in a very dynamic matter. There might even be chances to do specific combos when another character asks for a specific move. The AI will immediately follow it up with an attack of their own, scoring a lot of damage in the process. It may sound like a lot to take in, but Atelier Ryza does offer difficulty sliders so that newcomers can ease into it more quickly. In either case, I felt constantly engaged during the battles which I am very pleased about.

The most divisive change within Atelier Ryza is likely the alchemy system. One one hand, I totally get that a different approach was bound to happen. The elements of the system have become unwieldy over the last number of games, leaving new players in the dust. At the same time, Atelier Ryza lacks the same depth of the previous titles, simply removing some functions that were there before. The new Item Synthesis has a branching skill tree where you throw in various elementals into nodes and develop recipes that way. The recipes have more time to build with new unlocked nodes, making them grow in importance. The strategy of the previous systems, where you had a lot of tools to play with, has been lost in the process. While I won't necessarily weep about it, there was surely a middle ground to be found here. Newcomers, however, obviously won't miss it.

As far as the presentation on Nintendo Switch is concerned, Atelier Ryza is quite the looker. With most of the previous games being ports, the amount of color present in them felt lessened as a result. It is clear that Atelier Ryza is built with the system in mind as the performance is top-notch. Framerate is rock solid, both in handheld and on the television. In addition, there are strides made in the color and animation departments, making for one attractive video game. The music is, as usual, strong and underlines the overall tone of the game well. 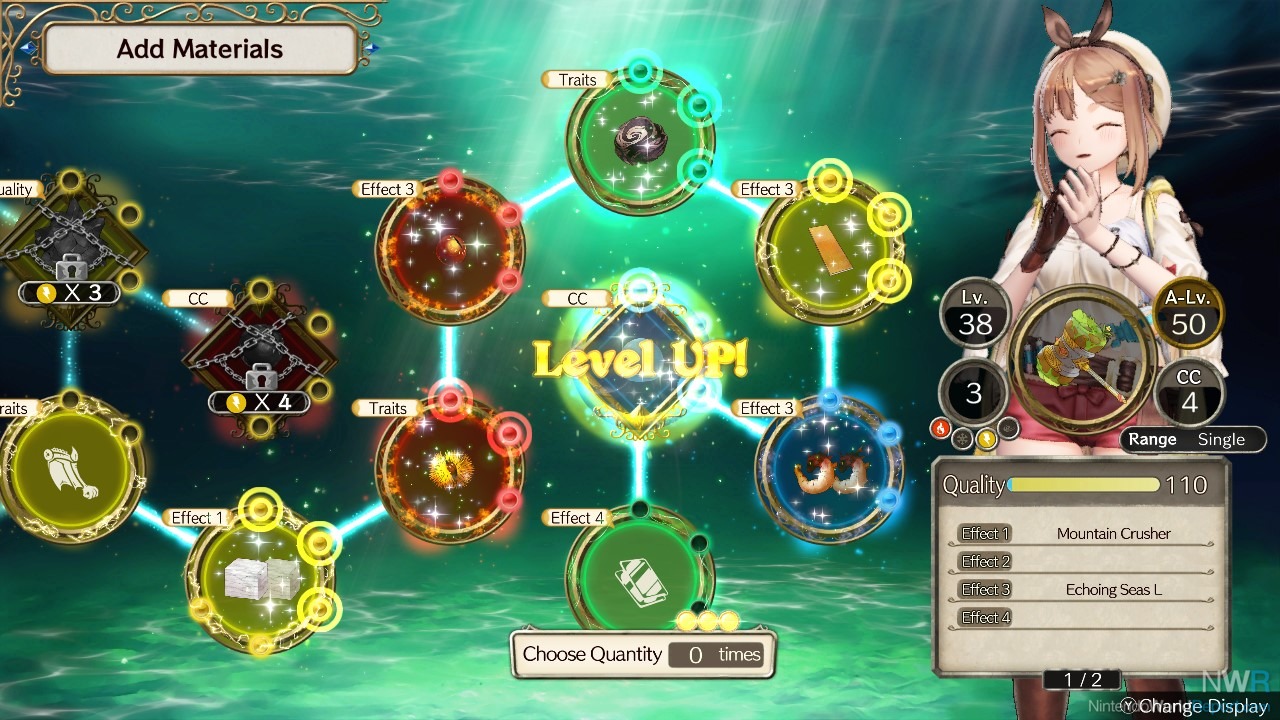 Atelier Ryza: Ever Darkness & the Secret Hideout is the best game in the series. With a brand new starting point and important changes to the game's mechanics, a larger number of players can come in and enjoy the journey. The battle system is challenging at first, but I got the hang of it pretty quickly. RPG veterans will likely feel the same, but there are difficulty sliders to give you more time to learn the ropes. While the alchemy system is lessened in scope, I think it benefits newcomers in a big way. Atelier Ryza is a journey about making the best of the here and now, and it is beautiful to behold for it. I felt incredibly engaged every step of the way, wanting to see the game through. I hope that this is the beginning of an engrossing new trilogy.