Striking when the iron is cold

It seems that 3D platformers are few and far between these days. So when a new one comes along, it tends to pick up some buzz from the general crowd, let alone fans of the “collectathon” genre. Now add a licensed IP to the mix, and you will find a rare gem of something that feels like a time capsule from a decade ago. That is, in a “nutshell”, Ice Age Scrat’s Nutty Adventure. 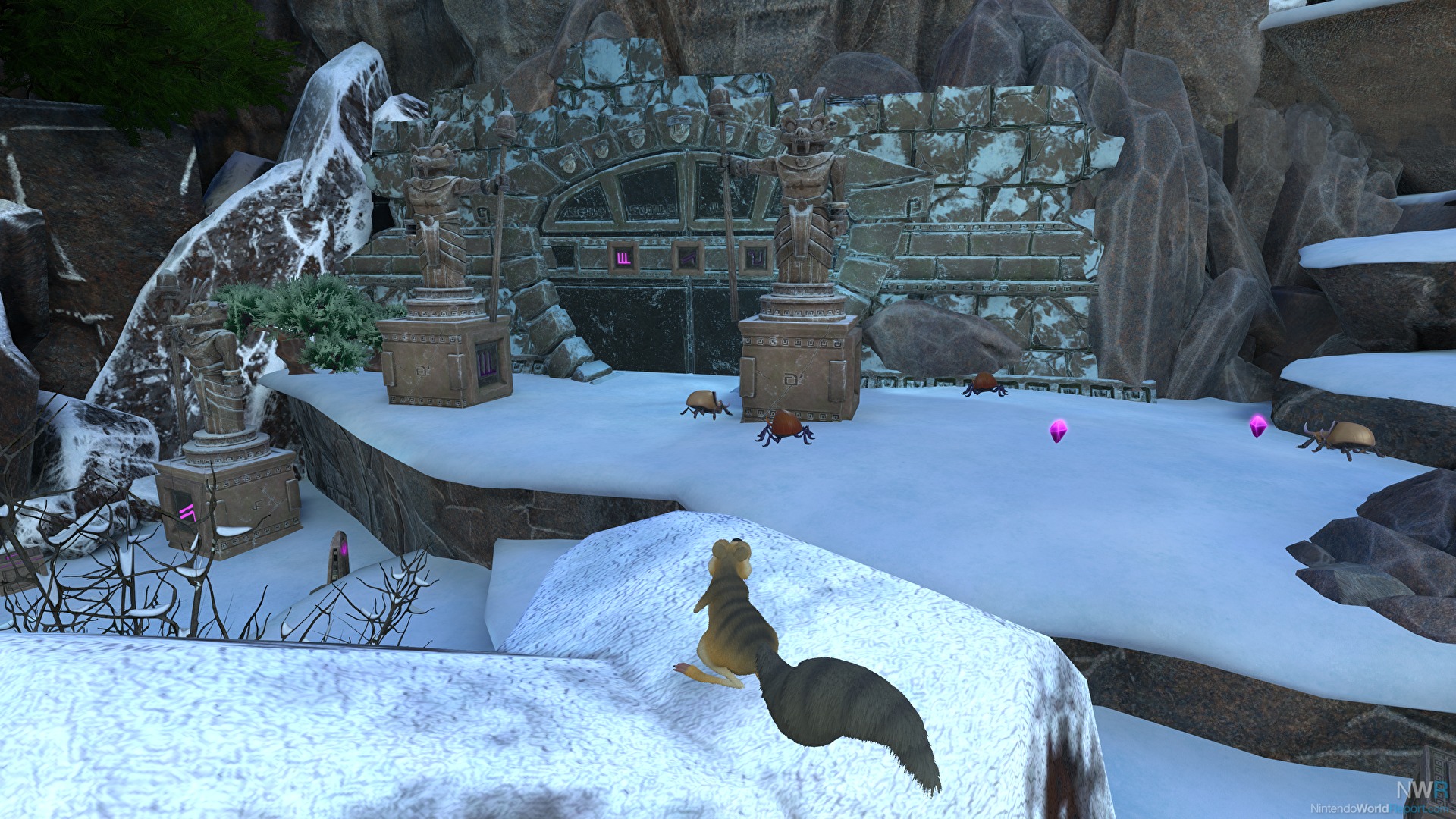 The silly Saber-Toothed Squirrel, Scrat, from Blue Sky Studio’s Ice Age series has his own game now available on the Nintendo Switch. Interestingly, as of this review, a new Ice Age film is not being promoted, so a game based on one of the comic relief characters in a genre that is seeing something of a revival seems a little bit of a curveball. That uniqueness is an advantage of Nutty Adventure. If you’ve already experienced the handful of recent 3D platformers and want to play another, this one might be for you. If you are not familiar with the character, Scrat’s mission in life is to collect acorns, presumably to store for the winter. In this outing, Scrat accidentally offers his prized acorn to a mysterious presence in a forgotten temple. The presence proclaims that Scrat is the destined hero that will return the ancient crystal nuts back to the temple and usher in the Golden Age. The game is silly but self-aware. There are four crystal nuts, one in each section of the world. Rather than play through four huge worlds, Scrat goes through four smaller levels in each one. These levels are very linear and don’t really focus on exploration.

Despite the mission being to collect the crystal nuts, and the land being flooded with purple acorn pick-ups, there is not that much to collect. There are statues hidden around each level, but these are fairly easy to find. There is no upgrade system or skill tree. It is very much a “start and go straight to the end” type of experience. Once I realized this, I lost interest in looking for secrets because there wasn’t really any incentive, and then my goal was just to get to the end so I could get to the next level. The level design also felt lacking. There wasn’t anything bad, but the platforming challenges got reused fairly often, to the point where I could predict what was in store for me. Often, I felt that the platforming challenges were just shuffled around from level to level, rather than different areas introducing new challenges. 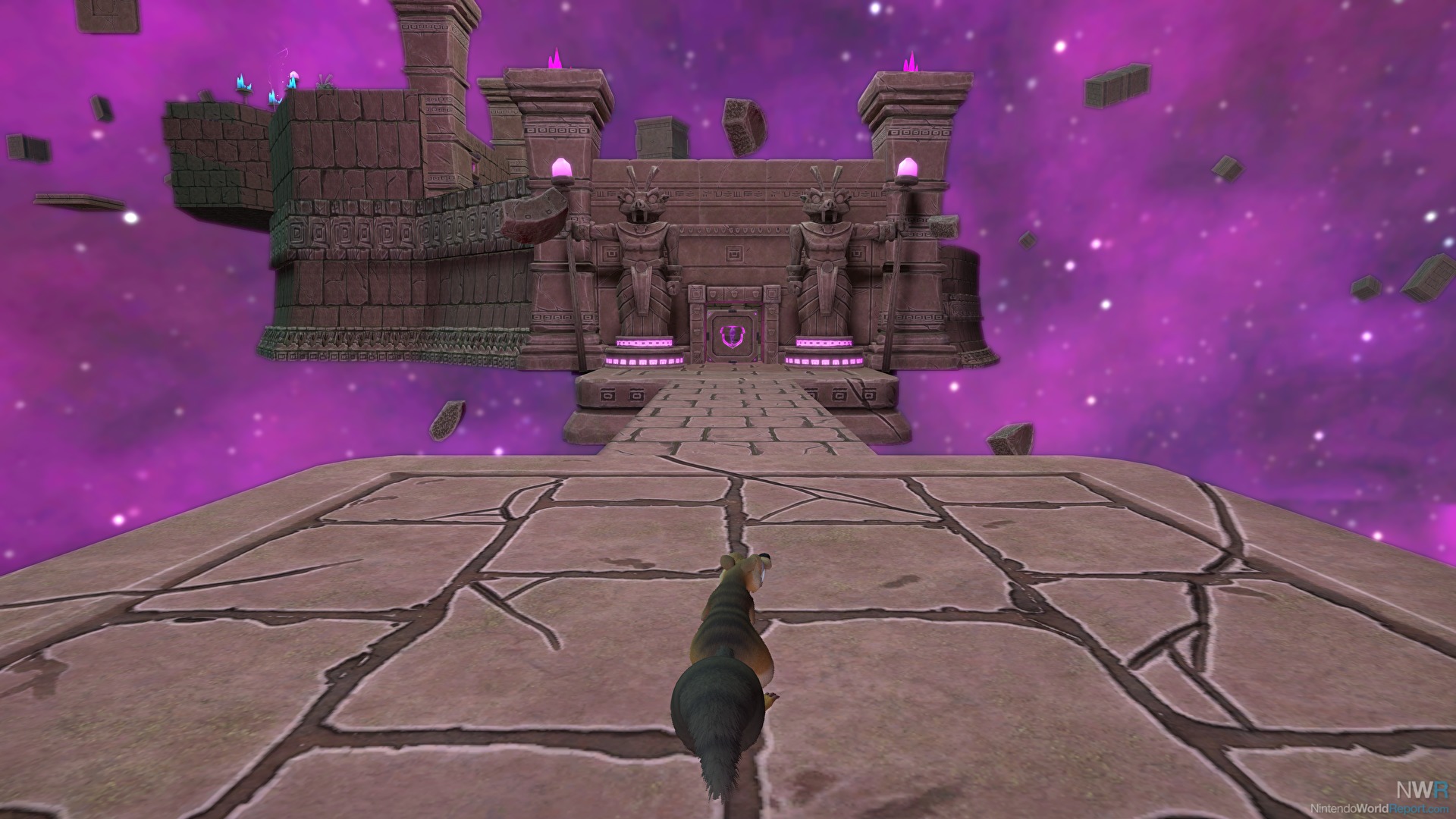 After obtaining a crystal nut, Scrat is rewarded with a new ability that will be used in the next world. Unfortunately, every ability was a disappointment, because all of them felt as if they should have been included in the base moveset. There have been plenty of 3D platformers that have gated off moves before and have built levels designed around them. If you’ve played Banjo-Kazooie, you will know that is a big aspect of progression in the level design and collection. However, Scrat’s Nutty Adventure takes very basic moves and tries to call them abilities. Earning a double jump or the ability to push blocks for block puzzles never feels rewarding, and is something I would rather have from the start. Couple this with the recycled level designs, and the experience felt very mediocre. Uninspired isn’t the word I would use, because it clearly is pulling what has worked in other 3D platformers, but everything is scaled back. The combat, too, has little to offer. Mash the attack button and Scrat is good to go. There is little in the visuals to show that Scrat has made contact with an enemy, which didn’t really add difficulty but did detract from the enjoyment of combat. This only added to the rushing-through- levels mindset that was growing every level. There isn’t an incentive to the combat because it wasn’t interesting to complete and the rewards are just more purple acorns that are already littered around levels.

It’s not all doom and gloom, though. I do not think Scrat’s Nutty Adventure is a bad game; it just doesn’t offer anything that it can call its own. There is nothing distinct about the gameplay. It’s just the character and license that give it an identity. It looks fine (albeit with some frame drops, particularly towards the end), and it tries its best to match the silly animations from Ice Age and the shorts that feature Scrat, pulling in humor as its best card. But it doesn’t live up to what it pulls inspiration from in terms of its license or its gameplay. I would rather play a more interesting 3D game that has more for me to do and explores different challenges. I would also rather watch one of the Ice Age films. In short, Ice Age Scrat’s Nutty Adventure takes basic ideas from other 3D platformers and tries to show how impressive they are, when in reality they are just things you’ve seen before. If you are a big Ice Age fan, then this is a harmless experience that doesn’t add to what the movies offer and rather imitates what came before it. For my money, I say let this one hibernate for the winter.

Such a bizarre game