Decent dungeon-crawling and depth with lackluster story and characters.

Mary Skelter 2 is a dungeon-crawler RPG in the vein of Etrian Odyssey or Persona Q. Anyone familiar with those series will understand the core gameplay loop of Mary Skelter 2, but the depth and breadth of its systems can confound even the most seasoned of players. If you have the patience to learn and understand how best to manipulate the stats and mechanics of Mary Skelter 2, there is a solid and lengthy experience to enjoy. However, the story and characters have a hard time capturing your attention, so it’s better left to more systems-oriented, dungeon-crawling fans.

As protagonist Otsuu, you team up with Blood Maidens that take inspiration from fairy tale characters. The ultimate goal is to escape from a creature called Jail, who has created a series of prisons that represent the dungeons you navigate your way through. The driving force of the game is finding and recruiting more Blood Maidens such as Snow White, Cinderella, and Rapunzel by exploring each dungeon, destroying its core, and making your way out safely. The characters seem unique, but the dialogue among them and the overall story itself are overwritten and boring, so you shouldn’t expect them to propel you forward. 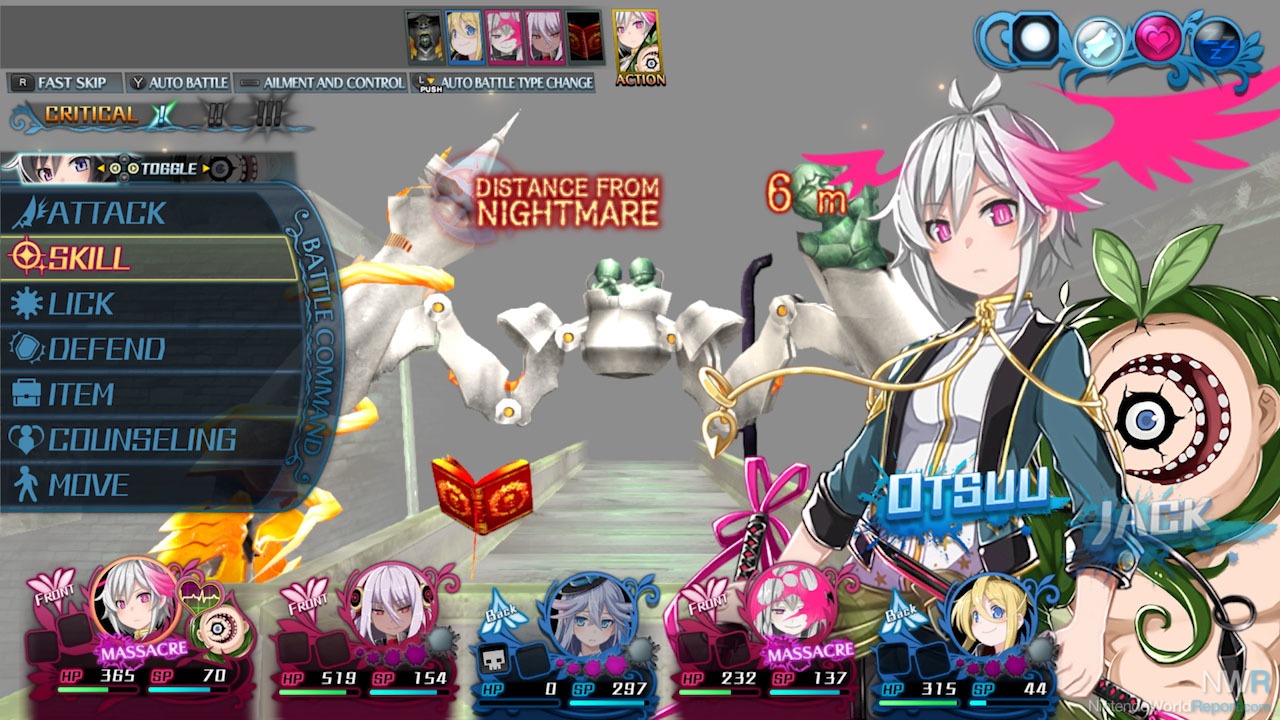 Instead, it’s the multitude of systems and mechanics at play that are more likely to draw people in to Mary Skelter 2, even if they might be fairly daunting. One such mechanic is that Otsuu and the Blood Maidens gain CP with every level up that can be used to learn new skills or improve existing ones, but you need to have enough skill slots to equip them. You also collect blood crystals that are used to strengthen your weapons and armor and allow characters to carry more skills. Another system involves the dungeons themselves and the Jail that houses them: the Jail has a mood gauge that increases as you fight in random battles, and as the meter fills the enemies you encounter become more difficult. Fortunately, you can lower the meter by filling one of three other gauges in a few different ways. As a final example, a Blood Splatter mechanic accumulates as you deal critical hits or attack enemy weaknesses, and this fills a meter for each Blood Maiden that at capacity forces her to enter Massacre mode for a few turns, which increases her stats and opens up new skills. I’m still only scratching the surface so far.

Another major aspect of the dungeon-crawling is the unique Nightmare creature that roams about in its respective prison. Initially, Nightmares cannot be killed; they can only be warded off by damaging them in combat or avoided by running away. It’s not until you destroy a prison’s core that you can actually fight a Nightmare. One annoying issue with this is that there will be times when the story or a Nightmare encounter prevents you from saving, healing, or leaving the dungeon. It’s imperative that you save regularly and whenever possible since there are no auto-saves or even a quick save feature. The idea of being chased and having to escape the Nightmares early on reminds me of the FOEs from the Etrian Odyssey games, and their grotesque designs and limited vulnerability are interesting departures. 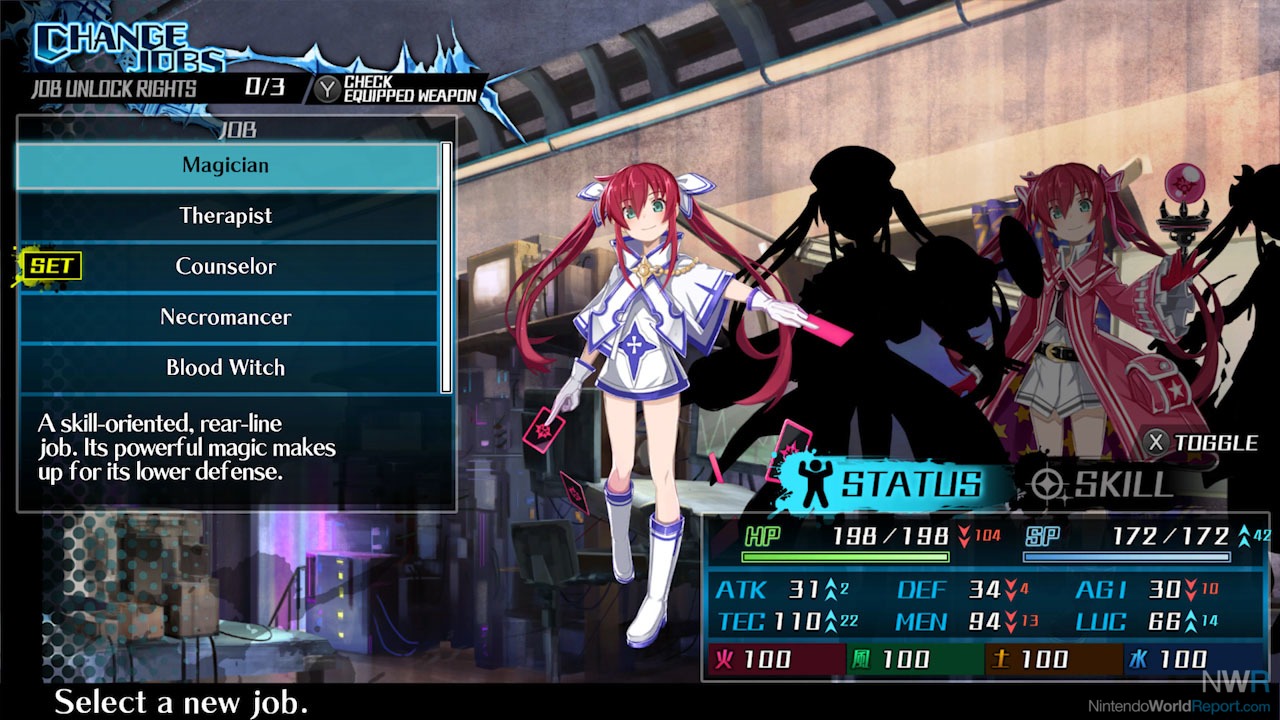 Combat is your standard turn-based affair, with an indicator at the top of the screen that shows turn order. There are times when experience points and level ups come very slowly, and the slower progression can make basic enemy encounters more challenging. It’s important to be donning new equipment regularly and improving it at your Base HQ. Unfortunately, you won’t really have new party members until you get 4-5 hours into the game, and this makes the beginning chapters feel stilted from both a story perspective and a combat one.

At the Base HQ, you can engage in dialogue with other characters, take on side quests⁠—only one at a time, unfortunately⁠—change jobs, and give gifts to and decorate the rooms of the Blood Maidens. In one area of the Base HQ is a place called the Rescue Center, where you play a fanservice-y rubbing mini-game to temporarily improve your Blood Maiden’s stats. It’s timed, hard to control, and lewd; obviously, it won’t appeal to everyone, but it can largely be ignored. 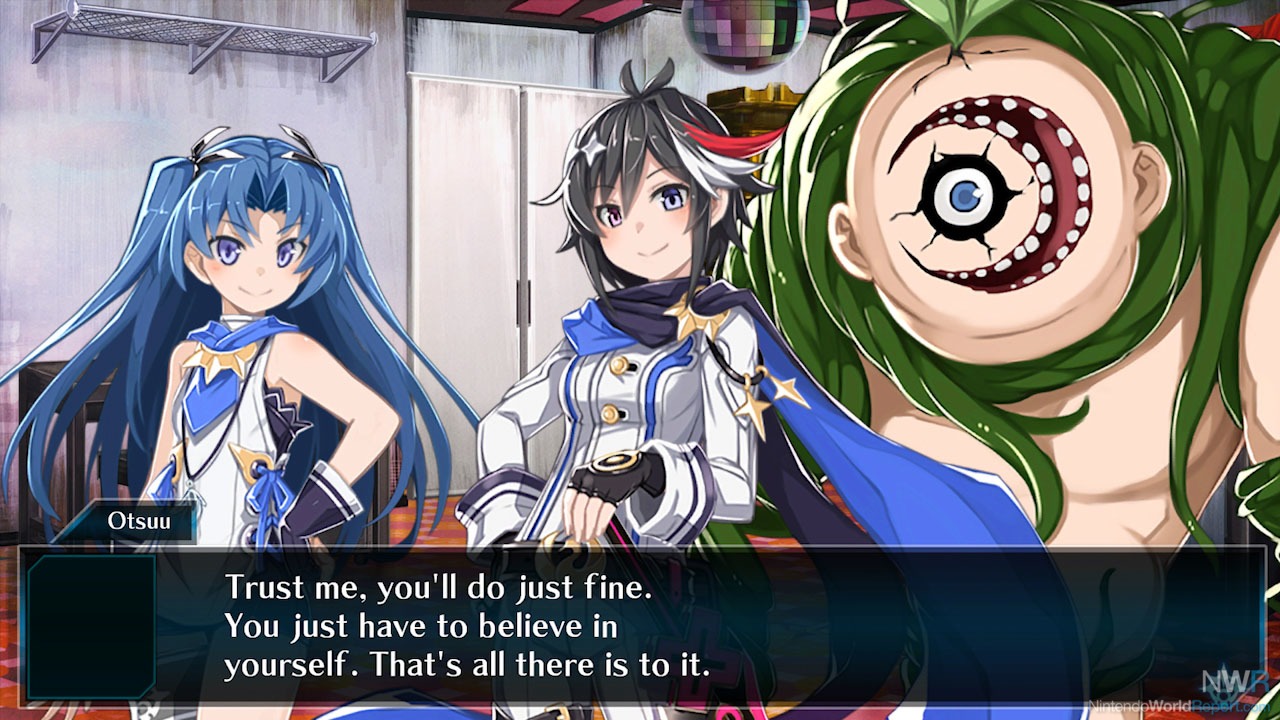 Some English voice acting, easy-to-navigate menus, and the colorful dungeons are all positives. Having to use the unique exploration abilities of the Blood Maidens to overcome certain obstacles means you aren’t just mindlessly wandering through corridors, but the mini-map could stand to be a little easier to see. A lot of nagging issues keep Mary Skelter from being a must-play title, and instead I see it reserved more for people who want incredibly deep mechanics and aren’t turned off by pedestrian story-telling. If you’re willing to put the time in, you can unlock costumes and even Mary Skelter: Nightmares, the first entry in the series, but approach this dungeon-crawler with caution. You won’t be able to avoid the anime girls in various states of undress nor skip walls of insipid dialogue.