Divinity: Original Sin II Definitive Edition is a commitment. It’s an open-world RPG with deep, challenging, grueling turn-based strategy battles. Character customization is nearly limitless, but every choice matters, and the complete lack of explanation punished me for dozens of hours. The rich tapestry of lore and subplots is a satisfying reward reserved only for those willing to dig deep into old-school tabletop mechanics. 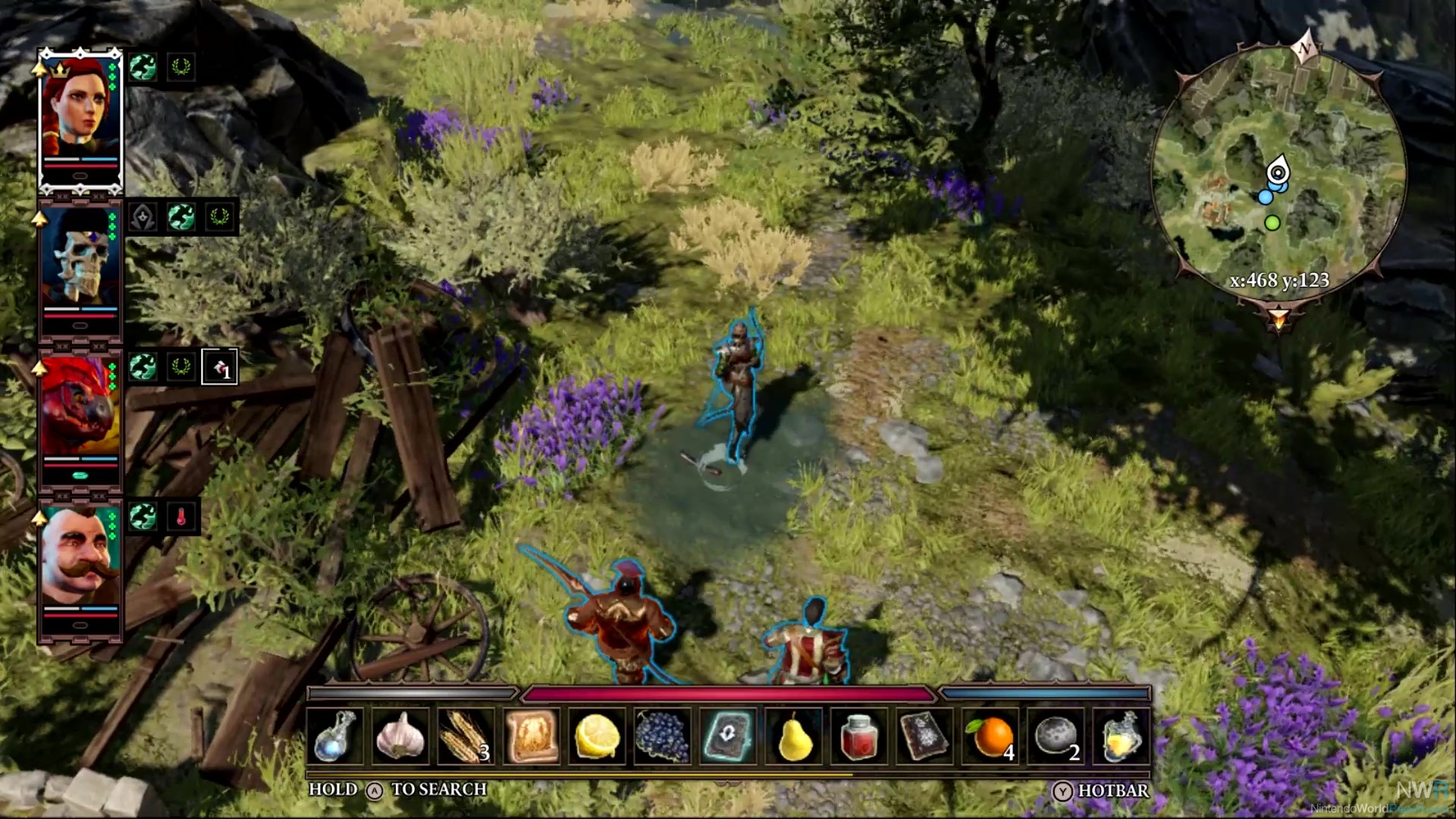 I started my adventure as Lohse, a cheeky bard with a demon perched on the edge of her psyche. Each of the six provided characters offers a unique backstory and path through the world. Custom characters give even more flexibility. Lohse woke up on a ship with a collar muting her Source, powerful magic rumored to attract dark beasts from the void. I put a bucket on Lohse's head as her first helmet.

Soon enough, Lohse and the others found themselves stranded on Fort Joy, a prison for Sourcers. I was immediately overwhelmed. I teamed up with three other Sourcerers: Beast, a dwarf on a quest to kill his queen; Fane, a skeleton who was locked away when the previous world collapsed; and The Red Prince, a compassionate royal lizard destined to rule the world. We crept into town and accidentally got into a fight with a group of card players. Dialogue options are realistic and varied, but that leaves them unpredictable. We barely scraped through. 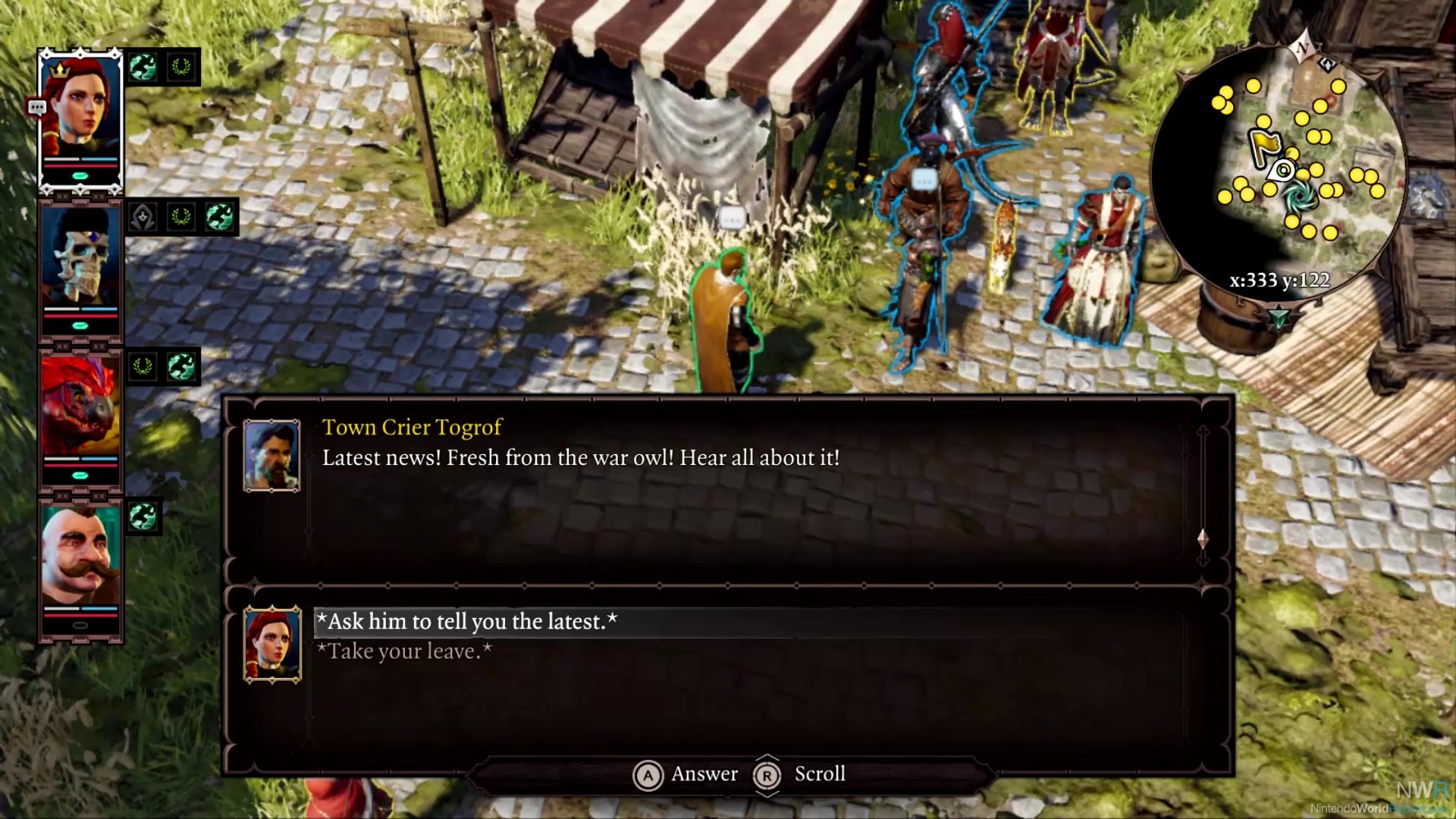 I spent the next few hours on quests for townspeople. I was surprised by just how unique each was; I found no fetch quests or random battles. Every encounter in Divinity is handcrafted around its environment, and NPC quests are so entangled that I had to think about who to fight or risk closing other quests early. Some stories have no answer, like the woman looking for her child who isn't even in the game world, adding to the bleakness of the void's destruction.

As I worked to escape Fort Joy, I came across a battle that always started with a fire grenade and ended in my death. I needed a new approach. I found a water barrel outside and dragged it into the dungeon to counter the fire, and an online stranger took control of The Red Prince. She relied heavily on defensive spells, something I never use in other games. Friends and randos can take control of a character and travel the world independently, but any progress is locked to the host’s save file. I turned off multiplayer when my new friend died and tried to take control of Lohse.

I started to understand combat. Characters start each battle with magic armor and physical armor granted by equipment. These protect against devastating status effects like shocked or crippled. The water barrel and fire grenade combined to make a steam cloud, a great place to hide from physical attacks but a terrible place to hide from shock magic. Movement, attacks, and abilities all pull from a super limited pool of Ability Points, so it made sense to place my other characters strategically as Lohse talked to the guard. I used all my resurrection scrolls, a pretty rare item, to revive my characters during and after our encounter. But with that fallen guard’s key, I was free from Fort Joy. 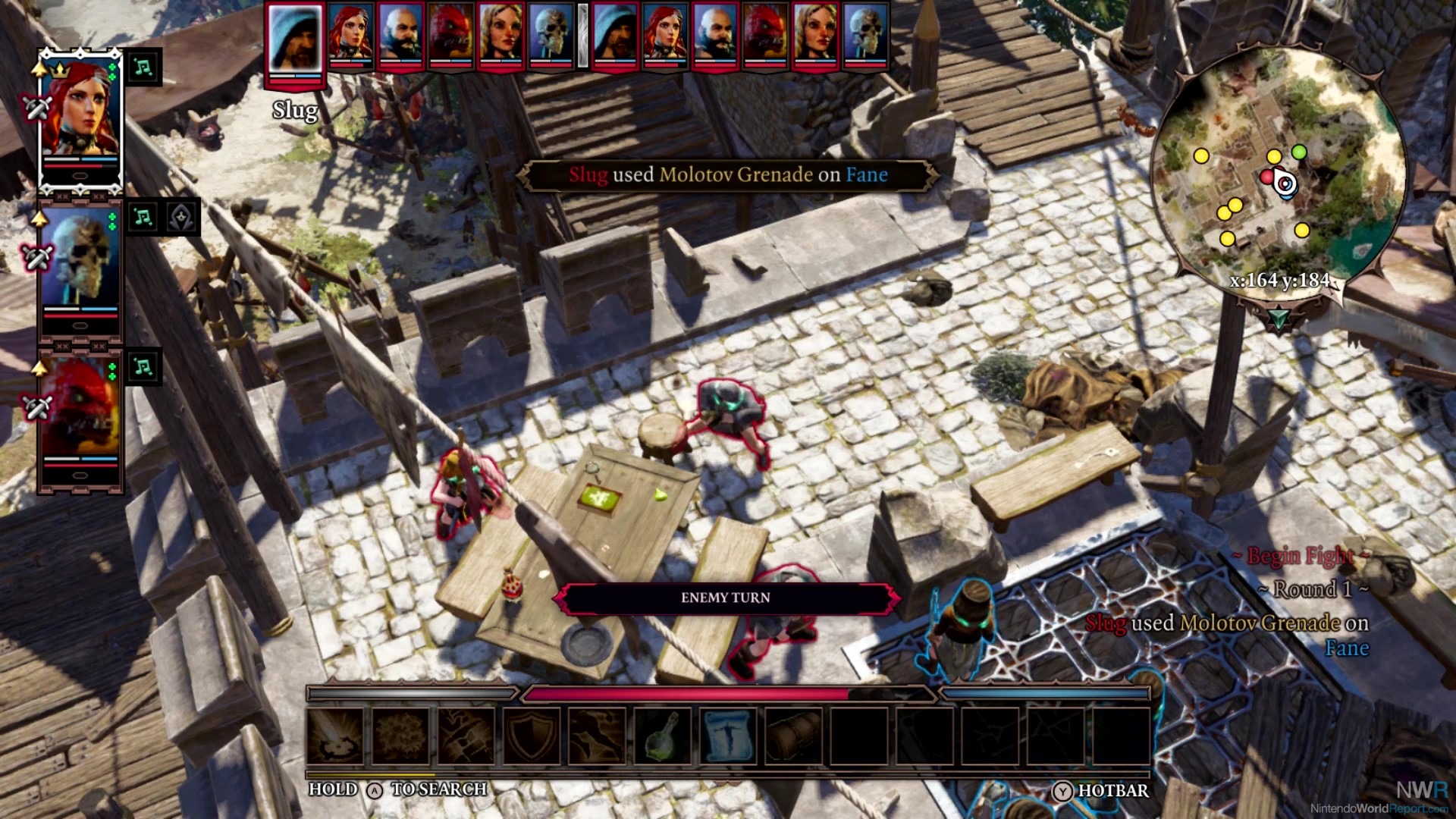 I realized I had a lot to learn, so I adjusted the difficulty and found a few included mods, like faster movement speed outside of battle. I kept exploring Fort Joy and found multiple ways out. Then, I killed everyone. Dead bodies stay in place for seemingly the entire game, and looting shopkeepers is a lot cheaper than buying items. Fort Joy is a terrible place where they experiment on Sourcerers, so it was mercy.

Fort Joy was just a fraction of the first map. Everywhere I looked, I found a new cave to explore or group of adventurers to help. Divinity offered no real direction, and the difference of even a single level can predetermine a battle’s outcome, so I proceeded with caution. I spent over 20 hours save-scumming my way across the island to freedom. Divinity isn’t the most beautiful game, but I appreciated its diversity of environments and astounding fantasy soundtrack. I got lost here in the best way.

Divinity’s strengths truly start to shine on the second map. Reaper's Coast dwarfs Fort Joy in size and content with almost no barriers to exploration. Shops are fully stocked, and every building houses a mystery. A magic mirror even lets characters reallocate stats. This massive undertaking also brings Divinity’s problems to light. I stumbled into unwinnable fights far too often and never knew where the plot wanted me to go. Scores of empty barrels and boxes became cumbersome to loot. Long reload times and impactful actions added up to hours of retries; I spent a full hour on a dialogue tree with a recruitable bird. I gave those hours willingly, though, gladly trading sleep to crawl toward another corner of the map. 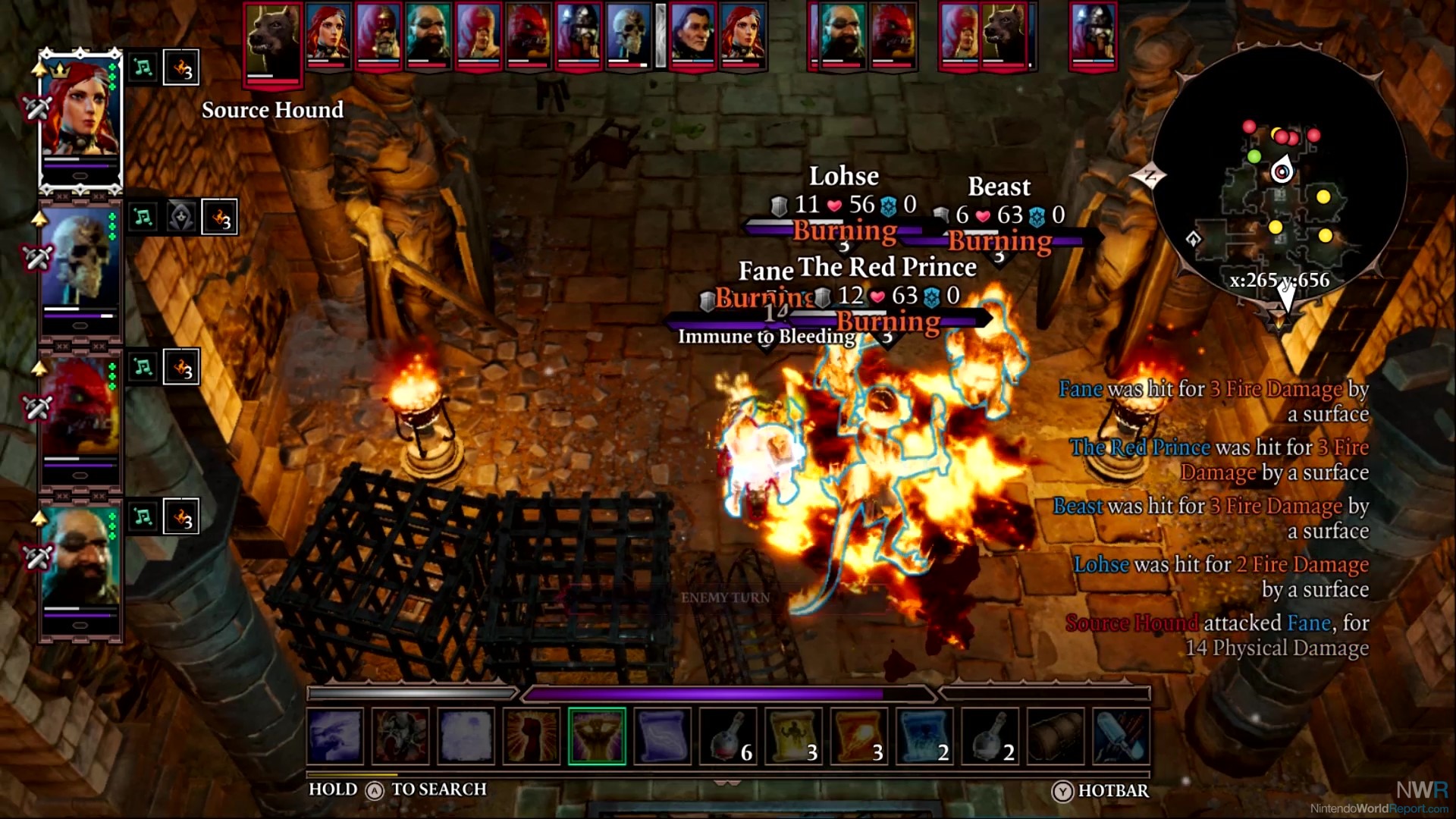 Perhaps most egregious is Divinity's deep character sheets. I was overwhelmed with choices each time I leveled up and got to pour points into stats. Each piece of equipment is so unique that optimizing characters can take hours. In fact, when I had nearly explored the entire map and all my characters were over-encumbered with loot, I sat down for four hours to sort through my items and trade everything I didn't need for anything I might. Ready for battle, I teleported to the final area of the map, and my game crashed. My most recent save was two days prior. Oops.

Perhaps the player most suited to Divinity is one with a lot of time. I thoroughly enjoyed my experience but still felt shaky on mechanics nearly 60 hours in. I spent hours scouring vague message boards for a foothold. I didn't find what I assume to be the main plot until I bombed a wall in a dungeon around hour 40. Divinity begs for multiple 100+ hour replays, a quest I’d gladly accept if time allowed. If anyone is looking for what I feel comfortable calling the biggest game on Switch, Divinity: Original Sin II Definitive Edition deserves your attention. To those who can't spare at least their whole selves to a game, sit this one out. Saving the world from the void is a full-time job.