Who are you going to call...for a remastered video game.

Let me get this off my chest first. I absolutely adore the Ghostbusters. Everything about it is so fun, inviting, and comical. The original movies are some of my favorite films of all time. Back in 2009 when Ghostbusters: The Video Game originally came out, I could not wait to dive into a new entry in the series. Ghostbusters: The Video Game Remastered is a great albeit stripped down blast from the recent past that is worth a playthrough for its story alone.

When Ghostbusters: The Video Game was announced over ten years ago, it was met with some criticism. Could the original cast and writers (Dan Aykroyd, the late Harold Ramis, Bill Murray and Ernie Hudson) team up again nearly twenty years after the second movie and make a game that could act as a Ghostbusters 3? In my opinion, yes they can. This was not just some movie tie in to cash out on the popularity of the brand; it was a built-from-the-ground-up game that the cast took seriously.

It has been about 10 years since I played this game and booting it back up immediately brought back memories. The first thing that came to mind was the fact that this is the first time the flagship title is on a Nintendo system. Back when Ghostbusters was first released there were actually two versions of the game: one for the Playstation 3, Xbox 360 and PC and one for the Nintendo Wii and Playstation 2. The version that was released on the Wii and PS2 had a similar story but used a more kid friendly aesthetic due to the limited graphics capabilities of those consoles. The Wii version looked okay, but it is nice to see the more realistic version come to Switch. 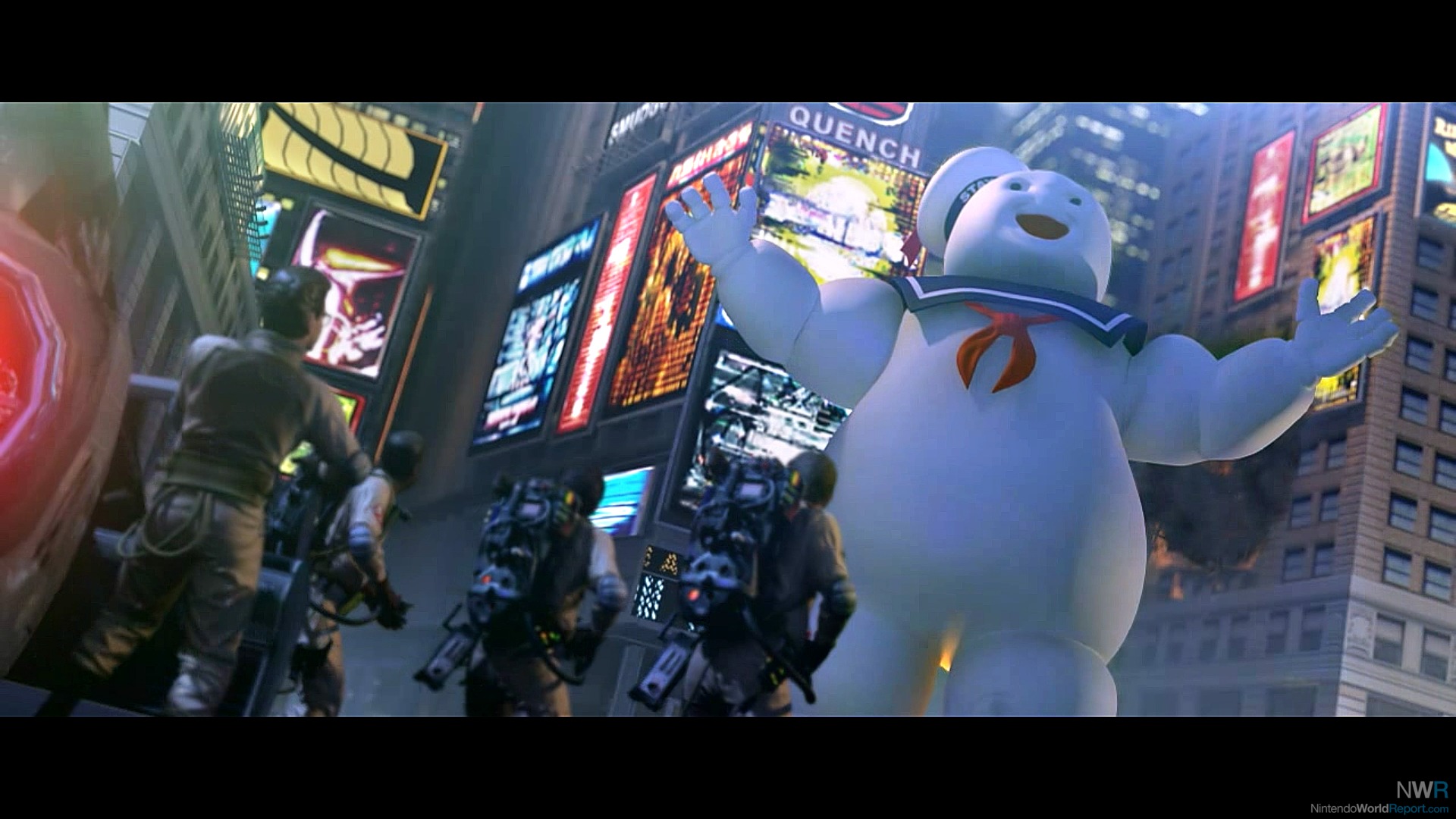 In terms of remastered visuals, it does look like it got a decent update from the original release. Character models look clean, ghosts have a nice shine to them as they float and fly around, and the environments have a larger than life feel to them. The one issue I have with this, however, is that while the gameplay got an overhaul, it appears the cutscenes did not. At least compared to the rest of the game, it looks as if the scenes were just plucked from the original game and placed in the same spots. It is not that big a deal when playing in handheld mode due to the smaller screen, but it’s really noticeable when you have the Switch docked and are looking at a large TV. Fortunately, this isn’t a deal breaker as the rest of the game looks great. I especially like the way the ghosts appear and disappear through the areas.

The gameplay feels just like it did 10 years ago. You play as a new recruit on the team and control them in the third person. As you progress through the store you get new abilities on your proton pack that can be upgraded as well. You can change the button configurations around as you like, but the default works the best in my opinion. The controls are not very complicated to begin with as you really only use a few buttons. Most of the time, you are walking or running from area to area to fire at ghosts or use your PKE meter to scan objects for clues. The PKE meter does shift your view into the first person and while you are scanning you can’t use your proton pack. In the instances that you do use the PKE meter, it is usually when you are not in active combat, so it's not a hindrance. 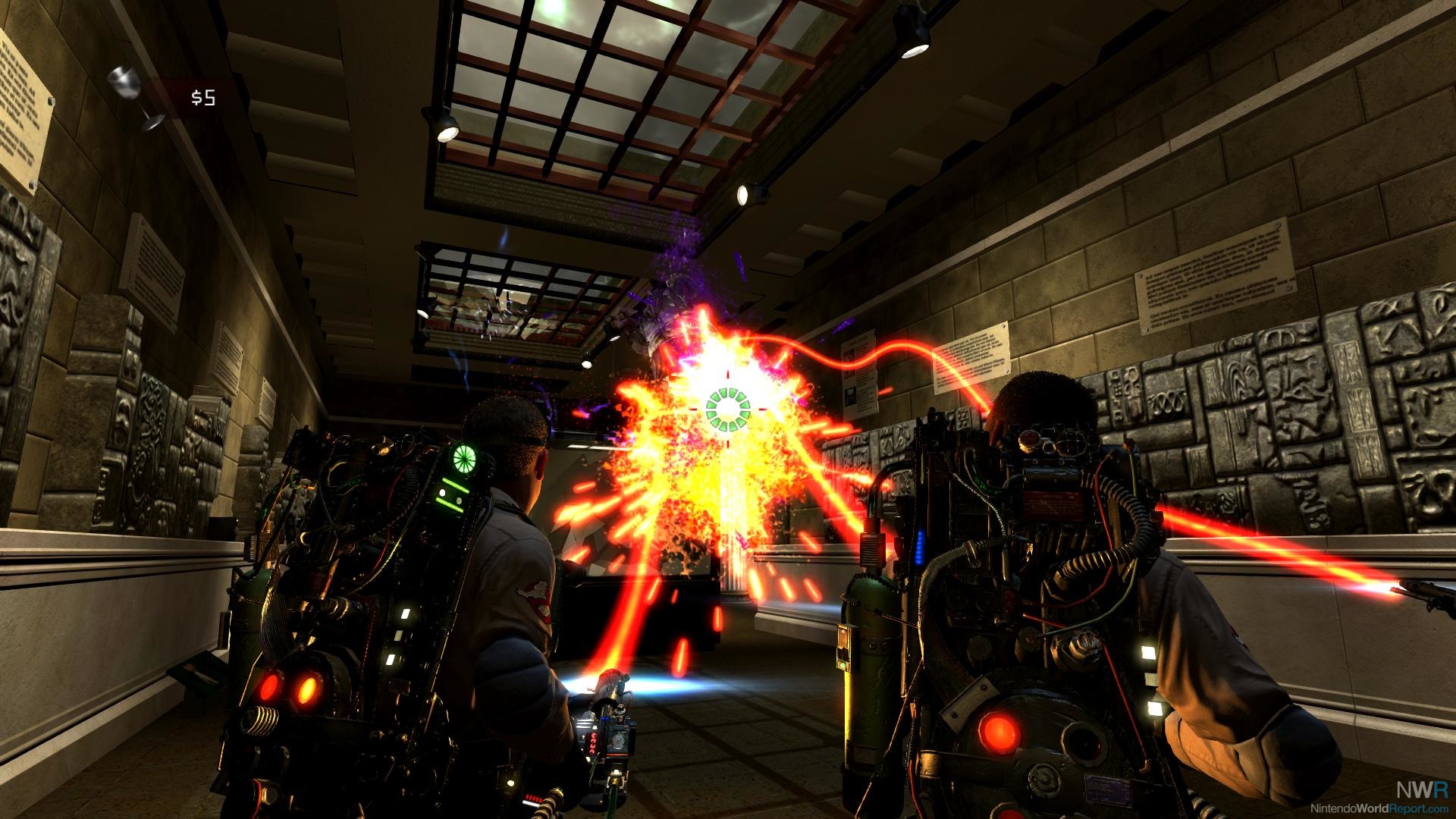 The story starts two years after the events of the second film and follows the team through the city of New York as the Gozer exhibit from the Museum of Natural History is emitting a high source of paranormal activity. You’ll be going from location to location as you track down the reason for why all these ghosts are appearing. Throughout the story, you’ll be seeing recognizable areas from the films such as the Sedgewick Hotel and the New York Public Library. You’ll also get to battle some pretty massive bosses including the Stay Puff Marshmallow Man. The entire game is voiced by the original cast, and the music and sound effects fit right in. It really is like playing Ghostbusters 3 in video game form.

As much as I loved running through the campaign, I am disappointed that all the multiplayer has been removed. The original game had online coop multiplayer where you could play with up to three others to capture ghosts in levels that were outside the main campaign. Even the Wii version had split-screen multiplayer that was offline, where you could play the entire story line with another person.

Ghostbusters: The Video Game Remastered has some good things going for it. A fun story, excellent voice work from the original cast, and a nice new shine to the visuals, all making the campaign feel solid. The removal of multiplayer and a lack of polish on the cutscenes make this feel a little rushed, though. If you are a fan of the brand, you will enjoy this game, but if you never really cared for the Ghostbusters, then this won’t change your mind.

Oh! I thought this was a remaster of the Wii version. Big bummer that there is no multiplayer so I may pass or hold out for a bargain sale.

You have to bear in mind that neither the developer (Terminal Reality) nor the publisher (Atari) still exist, so it's very possible that the original assets used to create some of the cutscenes no longer exist, so Saber Interactive just went with (badly) upscaling the cutscene video files that were in the original retail release. I say "some" because on the PS4 version of this remaster some cutscenes look noticeably better than others. The ones that seem to suffer seem to be the cutscenes that used the actual in-game assets...oddly.

This game was just "okay" I felt, and would probably have been boring if I didn't play it in co-op. Not that I would have been interested in this either way.