Ni no Kuni: Wrath of the White Witch (Switch) Review

Developer Level-5 is no stranger to making great RPGs, but none quite hold the clout that Ni no Kuni does. Originally released in 2011 in Japan, the pairing with Studio Ghibli immediately captured the hearts of millions with its stunning visuals and engaging battle system. Nearly seven years after its North American release, Ni no Kuni: Wrath of the White Witch finally makes its debut on a Nintendo console. While the Switch isn’t getting the Remastered version that the PS4 and PC will be receiving, the port does run smoothly. There were a few crashes while attempting to save, but fortunately these were a rare occurrence and not the norm. 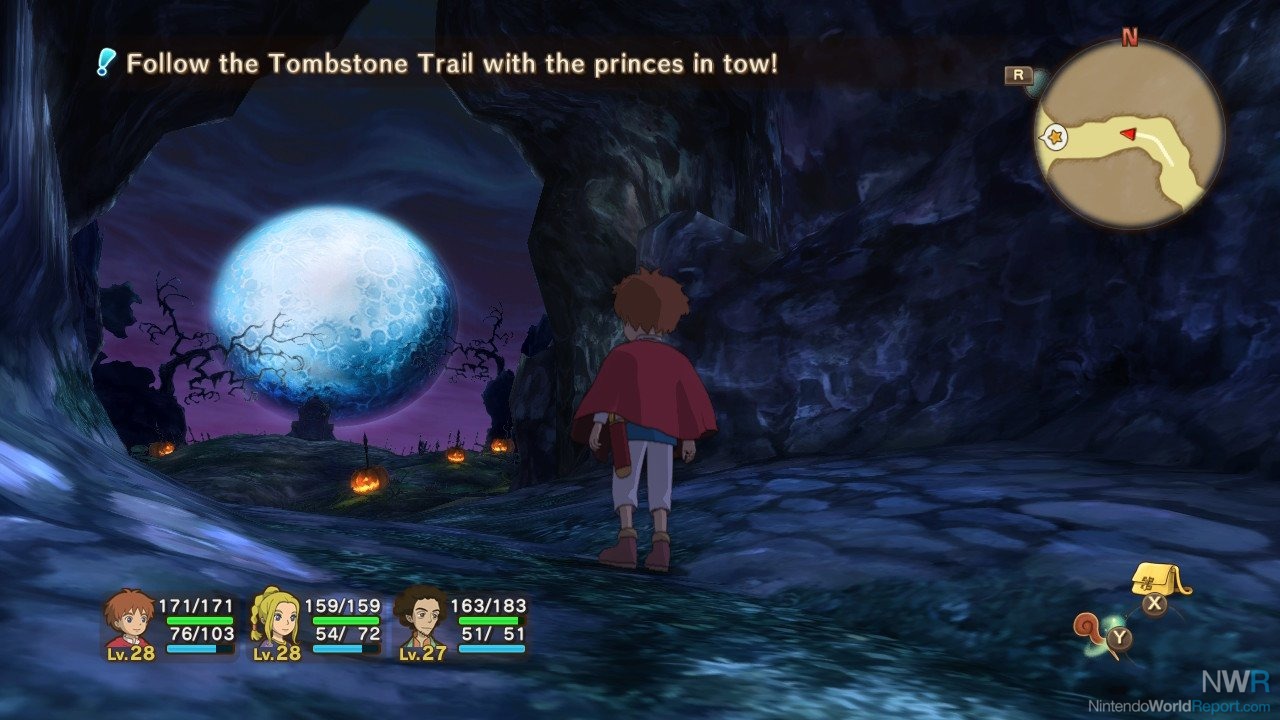 Ni no Kuni follows the story of a young boy named Oliver who tragically loses his mother. Distraught, he locks himself in his bedroom for days on end, when he ends up shedding a tear on a doll his mother had made for him. To his disbelief, the tear brings the doll to life, who we learn is Drippy, a fairy transformed by a curse into that form. Drippy informs Oliver that there may be hope to save his mother by stopping the evil Shadar from destroying his world as both Drippy’s world and the people within it are linked to Oliver’s. As he explores a variety of incredible locations, Oliver meets a wonderful cast of characters, helping him in his quest to save the world.

With any good RPG, an enjoyable battle system is imperative, and Ni no Kuni delivers a great blend of menu-based elements combined with a more action-focused approach. Battles take place in a 3D area where you and your Familiars, small creatures that fight alongside you, can move around freely. This allows you to distance yourself from enemies to avoid melee attacks, but it doesn’t make you immune to damage as spells still wreak havoc. While the party starts off with just Oliver, you gain new members along the way and in battle can switch between one of the three members on the fly as well as any of their three Familiars. This gives you up to 12 options for combat in any given battle, which can seem a bit daunting. 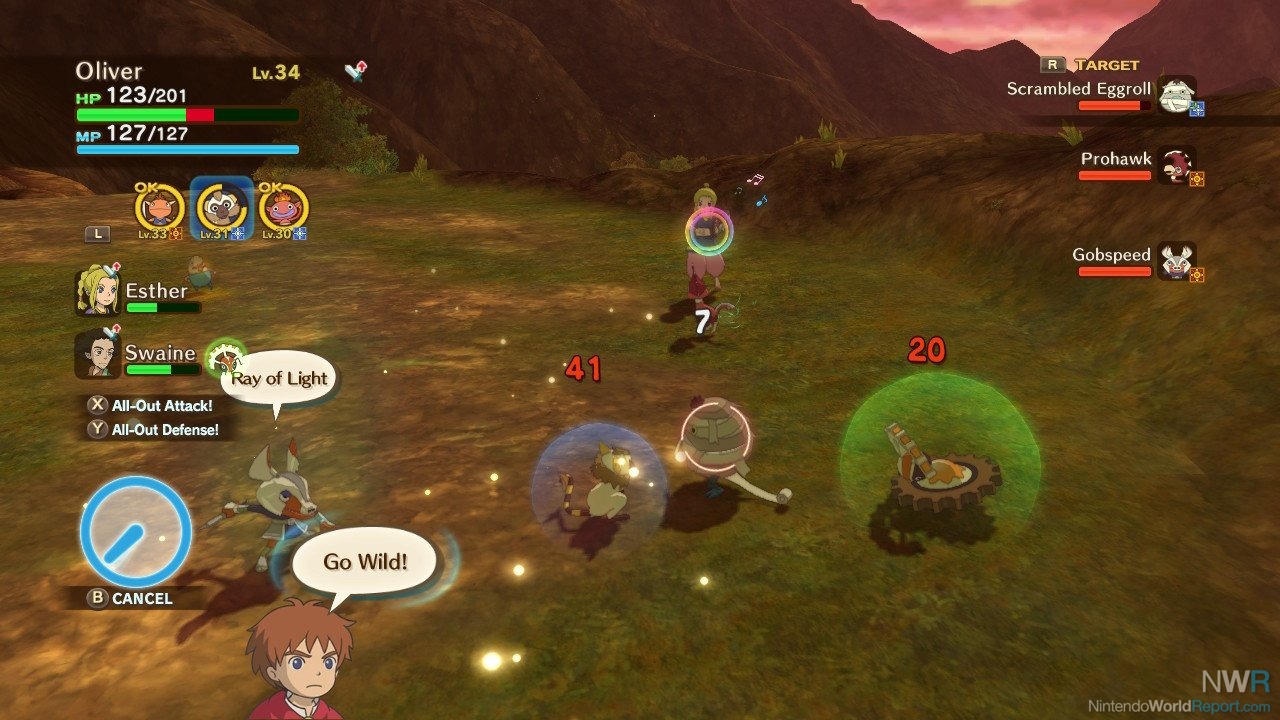 Originally, I honed in on just using one character and their Familiars, but as you encounter more challenging enemies, switching between characters becomes more important. When party members are controlled by the AI, they often die or blow through their MP really quickly. Tactics options allow you to give them a style of play, but the choices are limited. All Out Attack and All Out Defense options allow you to provide helpful direction, but these aren’t unlocked until a little bit into the game. It definitely gets frustrating when your team becomes low on MP during a long stretch of exploration as these areas tend to have a ton of encounters. MP and HP orbs do drop from enemies while in combat, so you can regain some there, but a lot of the time I found myself battling with little to no MP.

Familiars are a huge part of Ni no Kuni’s combat and putting together a solid team of them can be rewarding. These creatures act similar to Pokémon: you battle them in the wild and have a random chance to recruit them to your squad. Once they join you, each character can have three equipped and a reserve stock of three more, while the rest are sent to a bank, which is accessible at certain points, usually near a save stone. Familiars gain experience and level up in battle, eventually gaining the ability to undergo metamorphosis. Once they reach this point, using a stone matching the Familiar’s type will have them change into a stronger form with new skills to learn. These changes aren’t as drastic as a Pokémon evolution visually, but they still feel rewarding. Instead of keeping their current level, Familiars are reset down to level one, forcing you to level them up a bit before, say, taking on a big powerful boss. Familiars can also be powered up by feeding them treats you find or purchase. Certain foods will increase particular stats and this is a great way to customize the skillsets, but at the cost of painfully watching the feeding animation over and over with no way to skip it. 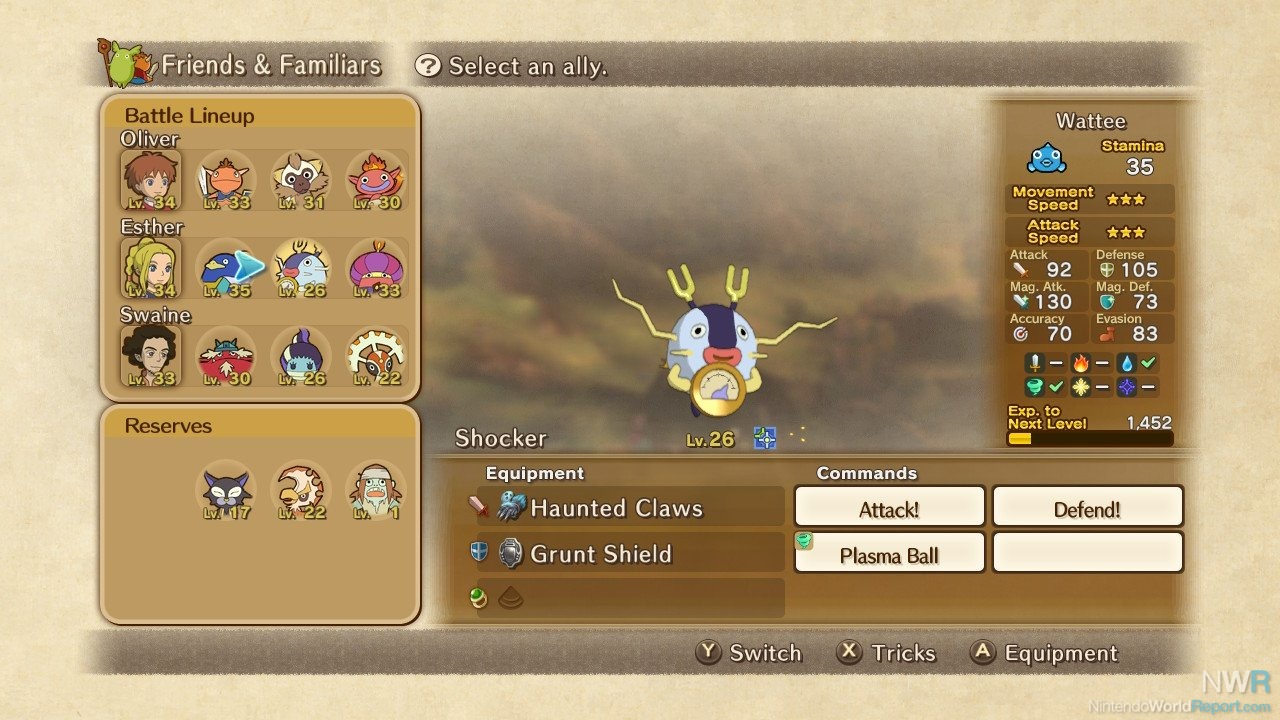 Where Ni no Kuni stands out the most is in its wonderful visual style. Of course, the Studio Ghibli animated cutscenes are always a treat, but I was constantly excited to explore new areas. Each new city you visit has a distinct flair and dungeons were always stunning, to the point where I was constantly stopping to look around at the little details within. Character and Familiar designs are interesting as well, but the real breadwinner is the environments. Interactions between characters and the overall dialogue is great, especially with the amazing voicework. The Switch port does a pretty bang up job outside of a few crashes I experienced. These came when trying to save my progress at save stones. Both came relatively early in the adventure, but constant saving was something I did moving forward. I experienced a few smaller glitches such as cars bugging out in town and an escort quest forcing me to leave the area and come back to fix it. Outside of these instances, the port runs well and looks good on the Switch.

Ni no Kuni: Wrath of the White Witch has gained the reputation of being a top-tier RPG and among the favorites of all time for some. While it certainly does a lot right, I think a few things hold it back from being truly amazing. The battle system, while fun, can become frustrating at points with the AI-controlled party members. Constantly switching between characters during regular battles wasn’t something I found to be as enjoyable as doing it for boss fights, but not doing so resulted in low MP. With a pretty high encounter rate, this caused more than a few issues. That’s not to say Ni no Kuni isn’t entertaining; it just feels a bit imperfect. Regardless, exploring the different sights within the stunning world and interacting with its fascinating characters helped to overcome the shortcomings.