Pandemic is a cooperative board game I was introduced to almost a decade ago which always appealed to me, but never got the opportunity to try. Meant to be played between two-to-five people, the goal is to work as a team to eradicate the four diseases spreading throughout the world across the various cities on the map. If you cannot contain the diseases, or eight outbreaks occur, or the deck of cards runs out, you lose. Each player chooses a character class (Quarantine Specialist, Contingency Planner, Dispatcher, Researcher, Scientist, Medic) who each have a unique role or ability that helps aid progress towards meeting that goal. 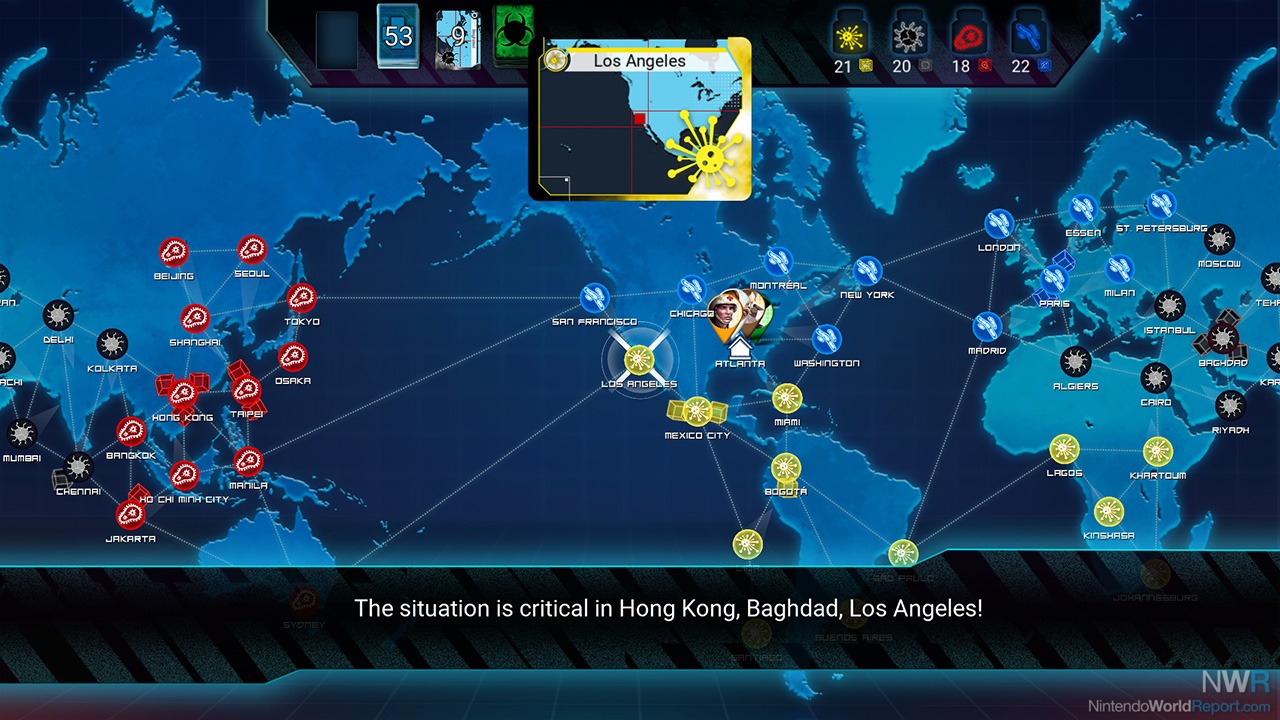 The map is broken into four color-coded regions where different diseases can spread and are assigned a pool of cubes that act as infection points. Each round includes three phases – players take four actions (in which they can move their character, play event cards, remove disease cubes from a space, build research stations, etc.), draw two cards afterward, then an infection phase. In order to eradicate one of the diseases, a character must hold five city cards of the same color in their hand and be at a research station a player builds in that region. In play, the game is oppressive, constantly making you and your teammates feel disadvantaged after each turn because of how quick the diseases can spiral out of control and push towards a loss. Success requires both luck of the draw and working with your team to use turns as efficiently as possible, making each hard-fought victory extremely satisfying.

But don’t expect to get help understanding how to play. In truth, this digital edition’s presentation and features can be generously described as bare-bones. At launch you’re treated to a brief, somewhat hokey full motion video presentation to the premise. There is no tutorial mode to guide you along the rules and game flow. Rules are included in a separate page but are contained within a glorified word document with hotlinks to different sections, so like the board game it originates from, be ready to do some reading as a preamble. Individual scenario levels are included, but similarly don’t provide any guidance, only a narrower goal to complete within a certain number of turns. While those may help hone-in those skills, they don’t do any more to act as a teacher.

Also, worth noting as part of this threadbare approach, there’s no online mode. An argument could be made that board games are a communal experience, one which a critical part of the fun is to all be in the same room to share in the experience together. But I also see this as a missed opportunity for some creative solutions to emulate that experience. While not robust, Nintendo has voice chat now. There’s a litany of examples where games have offered connecting webcams of some type to allow face-to-face interaction between players not in the same room. Even something like the Jackbox Party Packs where phones are used as controllers could be a novel way to make online multiplayer feel like a robust option, but unfortunately nothing of that nature is found here.

For better or worse, Pandemic on Switch is little more than a digital recreation of the hit board game that you can enjoy solo or grouped-up. The lack of features, side modes, online play and presentation are disappointing, but at its core this is still one of the more fun cooperative board games I’ve ever played in a compact form on the Switch for a reasonable price. While this isn’t the board game miracle cure, with the right expectations it’ll fix what ails you.