Being a 30-something guy, it didn’t take long to guess the ages of the folks over at Behold Studios, makers of the Dungeons and Dragons-inspired RPG Knights of Pen and Paper. Playing one of their games is like reliving my childhood, with details so particular that only someone who was of the right age at a certain time would think to be so important. Their latest title on Switch is another nostalgia-inspired adventure called Chroma Squad. Heavily influenced by Super Sentai and the Power Rangers (so much so they had to include a note in their logo), Chroma Squad does a terrific job of recapturing that feeling of teamwork and good conquering over evil in a cheesy way that felt so good as a kid. 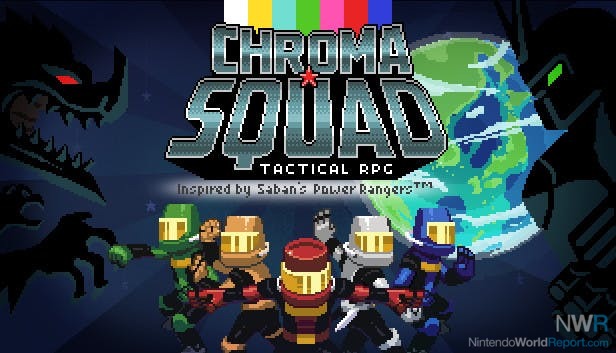 Much like their first title on Switch, Chroma Squad blurs the line between reality and fantasy. The story begins on the set of a Power Rangers-like studio production. The director rudely barks orders at the cast of doubles dressed as Rangers performing the stunts to the point of the entire group quitting on the spot. The five decide to start their own studio, and together they find an empty warehouse and begin filming their own Ranger show knock-off called the Chroma Squad.

Levels play out like television seasons, with a single season consisting of a number of shows leading up to the season finale. The combat during each episode takes place on a tactical grid, with the goal of defeating the monster by the end of the show and accomplishing a number of tasks meant to boost the size of the audience. Combat is turn-based, with each individual member having their own unique moves and vital statistics. Some squad members can move at greater distances on the grid, while others provide greater damage when attacking. The strategy to win each battle becomes pretty clear but the addition of an audience meter provides that incentive to not only win, but to do it in style. 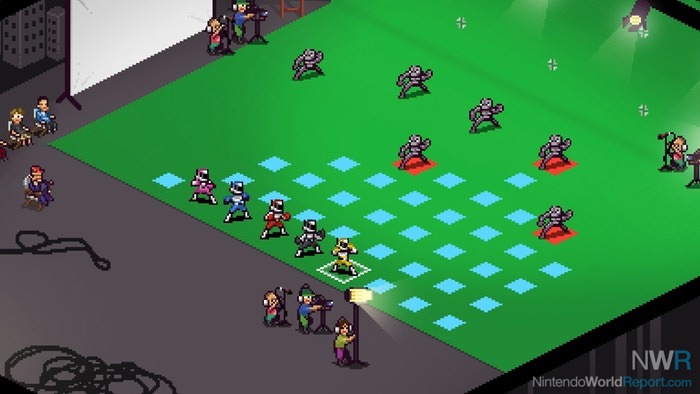 Team-based attacks provide greater damage and provide additional boosts to audience levels, and just like its inspiration, the best way to increase viewers is by finishing off the villain with finishing move that requires the entire group. In certain cases, usually the season finale, the villain grows to the size of a building and the squad needs to defeat the enemy in their MechaZord. The battle is a simplistic timing-based exercise but its still pretty cool to fight in a giant robot. The tactical gameplay is enjoyable but I couldn’t help but feel a little exhausted with the combat by the end of a season. Thankfully, the addition of new moves for each character keeps the early part of a season feeling fresh but often I found myself ready for something new.

Once the battle is over, the team retires back to the studio and utilizes the money earned from the previous show. Upgrades to the costumes can be purchased, or you can put the money towards upgrading the studio and improving the video quality of the show. Audience statistics are tracked and the squad can even hire advertising firms to boost revenues. It’s a neat concept to include RPG elements into the experience while still keeping an authentic Power Rangers feeling. No shortage of customization options are available, even so much that you can change the names of the characters, the name of your team, or even the catch phrases that are shouted during each episode.

Chroma Squad certainly does a solid job of providing an experience that invokes pleasant memories of days past. After several hours of playtime I found myself watching old episodes of the original Power Rangers on Netflix. Only three days later and my kids are halfway through season one, eagerly waiting for the introduction of the Green Ranger. While the tactical-based combat provides a decent reason for younger fans to try out Chroma Squad, it’s abundantly clear which audience is going to appreciate this game the most.