Earn the title of Master Builder with your own two hands.

Popular JRPG franchise Dragon Quest has seen its fair share of spinoffs, from the musical Theatrhythm, which never came to the West, and musuo Heroes titles, to the Pokemon-like Monsters games. In 2016, Square Enix released Dragon Quest Builders, yet another spinoff, but this one blended traditional Dragon Quest character design, items, sounds, and charm with the freeform creation and exploration of Minecraft. While I enjoyed this first entry, it seemed to rely too heavily on farming for particular materials and crafting absolutely everything. The story, quests, and characters weren’t compelling enough to keep me going. However, Dragon Quest Builders 2 adds a more interesting narrative and various quality-of-life changes that make it one of the year’s best titles so far.

You begin by selecting a male or female character and then choosing your hair and eye color and your skin tone. A story-based tutorial begins with the player character held prisoner on a monster’s ship sailing the high seas. Here you are tasked with completing simple objectives that teach you the basic controls and mechanics, such as picking up and placing objects and crafting items. There are a few other captive humans onboard who appear destined to meet their maker, but as luck and video game tropes would have it, the ship crashes and you wake up on a deserted island. The opening works well for easing new players in while also providing an effective setup for the story.

On the Isle of Awakening, the first of many place-name puns that Dragon Quest fans have come to expect, you encounter two fellow survivors, Malroth and Lulu. The former is your constant companion who essentially mimics whatever actions you take. If you start chopping down a tree, he’ll help; if you’re beset by enemies, he’ll drop the gloves and back you up. Malroth’s presence makes the adventure feel less lonely, especially compared to the original game, but also more enjoyable since he provides advice and commentary along the way. He’ll ask you to make new weapons for him, and even try his hand at crafting, even though it always ends up literally blowing up in his face. Lulu, on the other hand, is one of the first quest-givers you encounter, and you end up building a small room and cooking for her, tasks that you’ll repeat in various forms throughout Builders 2. 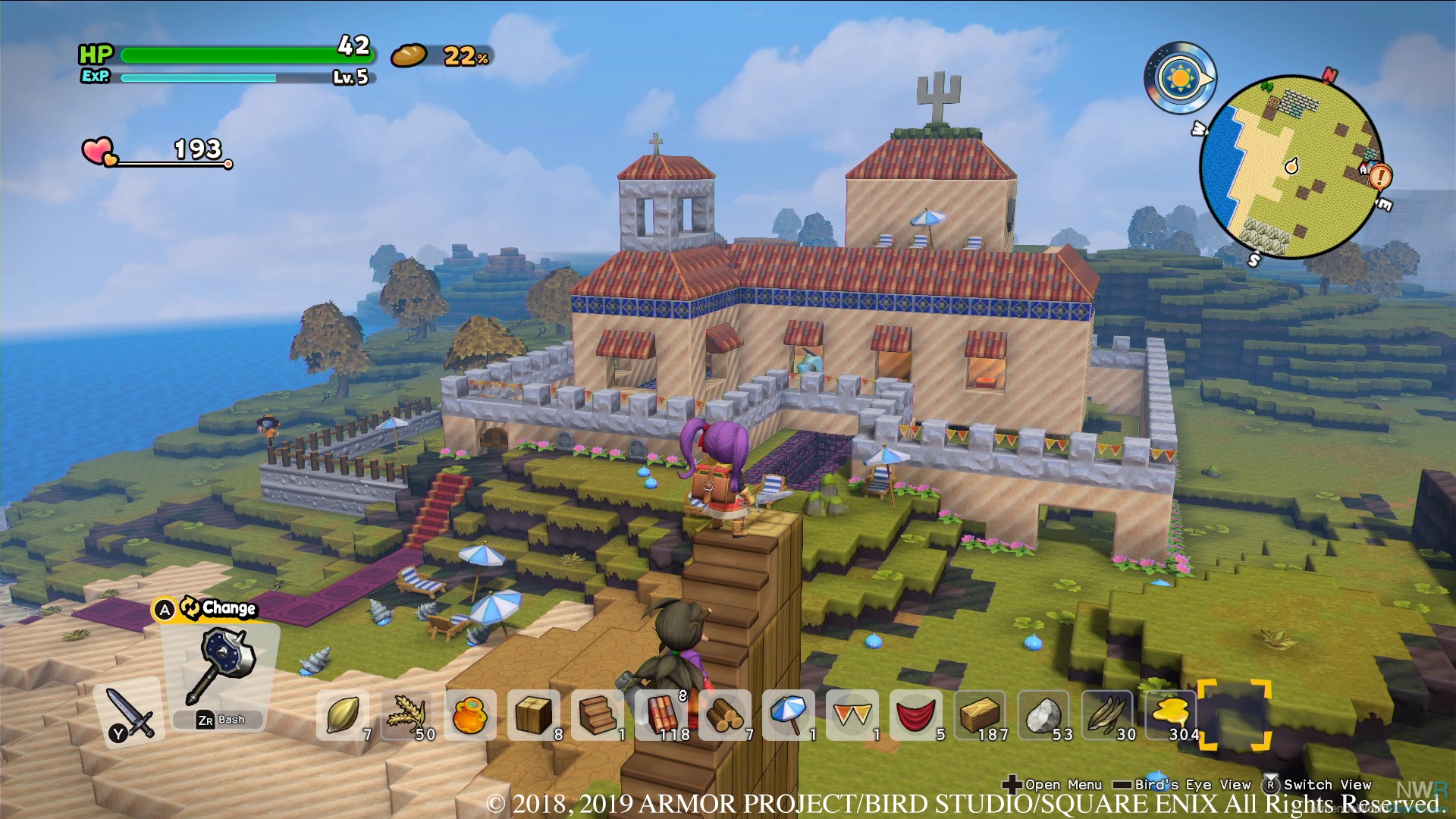 The Isle of Awakening serves as a home base of sorts where you bring people you encounter in your travels back to so that they can help you return it to its former glory. You also meet a ghostly spirit who guides you toward becoming a Master Builder, to take the place of the one from long ago. It is this process of visiting a new island, solving its respective problems to restore it to prosperity, and then recruiting people to live on the Isle of Awakening that serves as the primary gameplay loop, and all of this contributes to you learning new crafting recipes, improving your character and equipment, and eventually protecting the world as the new Master Builder.

After the opening few hours, you travel by boat to the land of Furrowfield, a land once filled with bountiful crops and thriving greenery now covered in muck and decay, and then to other large islands, like Khrumbul-Dun, a mining town in the middle of a desert area. Here you are given smaller quests until eventually a larger mission becomes available. The missions of Khrumbul-Dun revolve around mining and securing precious minerals to restore the power of an ancient golem named Goldirox, who wants to help you return the land to its former glory. Mining ore, building a bar, and keeping the miners motivated are all actions that satisfy the citizens of this island and ingratiate them to you, which generates little hearts that you collect to improve the overall happiness rating. By increasing this rating, you can invigorate the town and invite new people to join you in your endeavor to power-up Goldirox. By completing the various tasks given to you, often with the more menial leading into the more significant, you can restore the golem’s strength and banish the evil plaguing the land, thus making the island self-sufficient, which encourages many of the people of Khrumbul-Dun to join you on the Isle of Awakening. 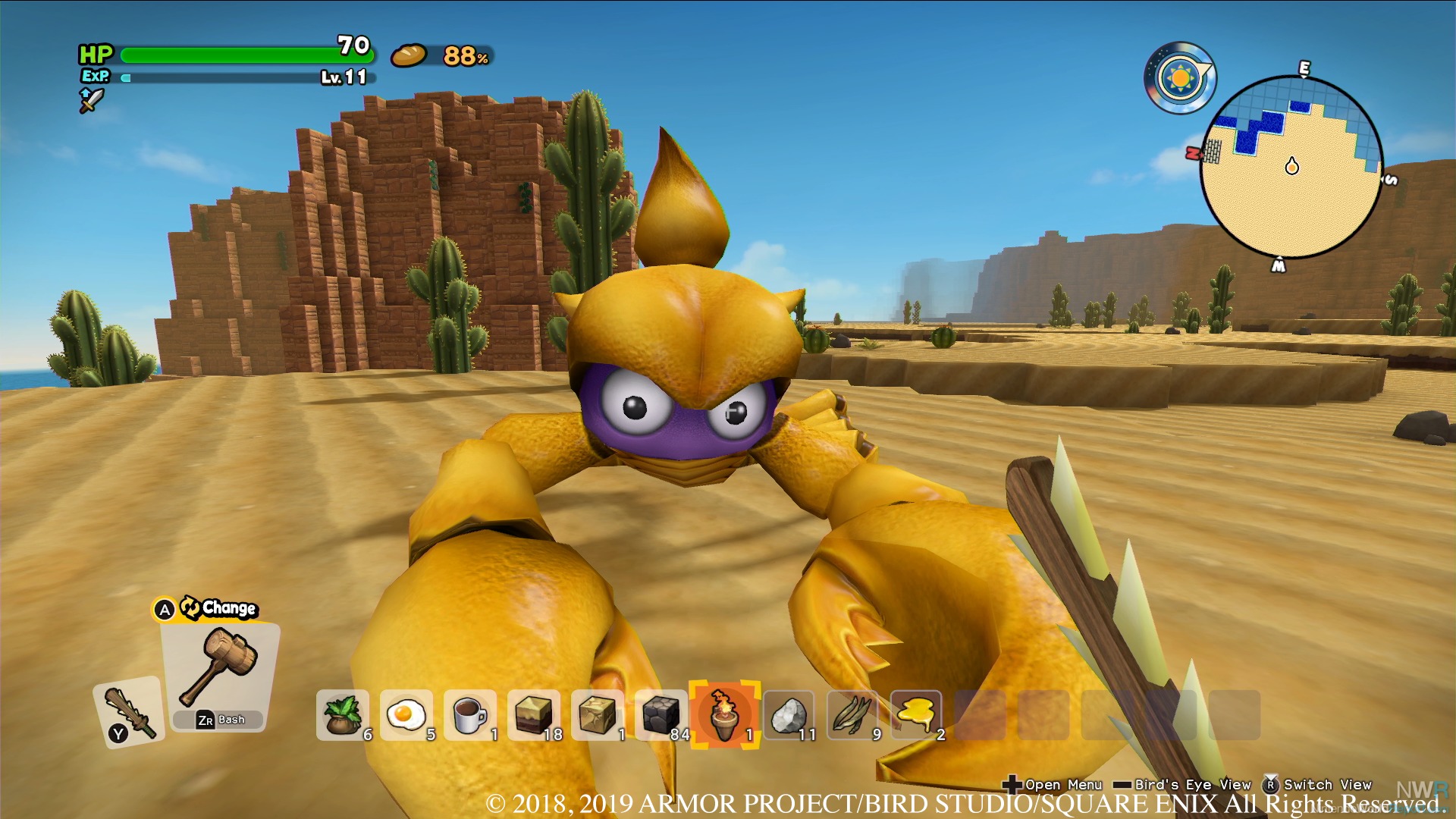 Despite its simplicity, the gameplay of Builders 2 is consistently enthralling. During most of my play sessions, I set out to play for about an hour and would repeatedly be surprised when two or three had passed. When you aren’t out collecting building materials and exploring, you are defending your base from monster invasions. In addition to crafting weapons for yourself and Malroth, you can also arm the people around town, who will help repel the hordes of invaders. You’ll also cook food and use that to replenish your health and hunger meters. The best part is that nearly everything you do results in some form of progression. Fighting gives you experience and levels that increase your health; completing quests advances the story or gives you recipes and materials; exploring allows you to find puzzles that reward you with mini medals or special items. Every minute of play leads to the checking of boxes and filling of meters, so every session is meaningful and full of accomplishment.

Because of its genre-bridging nature, Builders 2 could easily have turned off fans of its component series, but it manages to straddle the line in such a way that everyone is likely to fall in love. The freedom and construction of Minecraft are fully-fleshed out but not entirely forced upon you. If you want your kitchen or bedroom to look immaculate, knock yourself out, but if you would rather do the bare minimum to fulfill people’s requests, then keep up the poor-quality work. Only on occasion are you asked to build something in a very specific way. 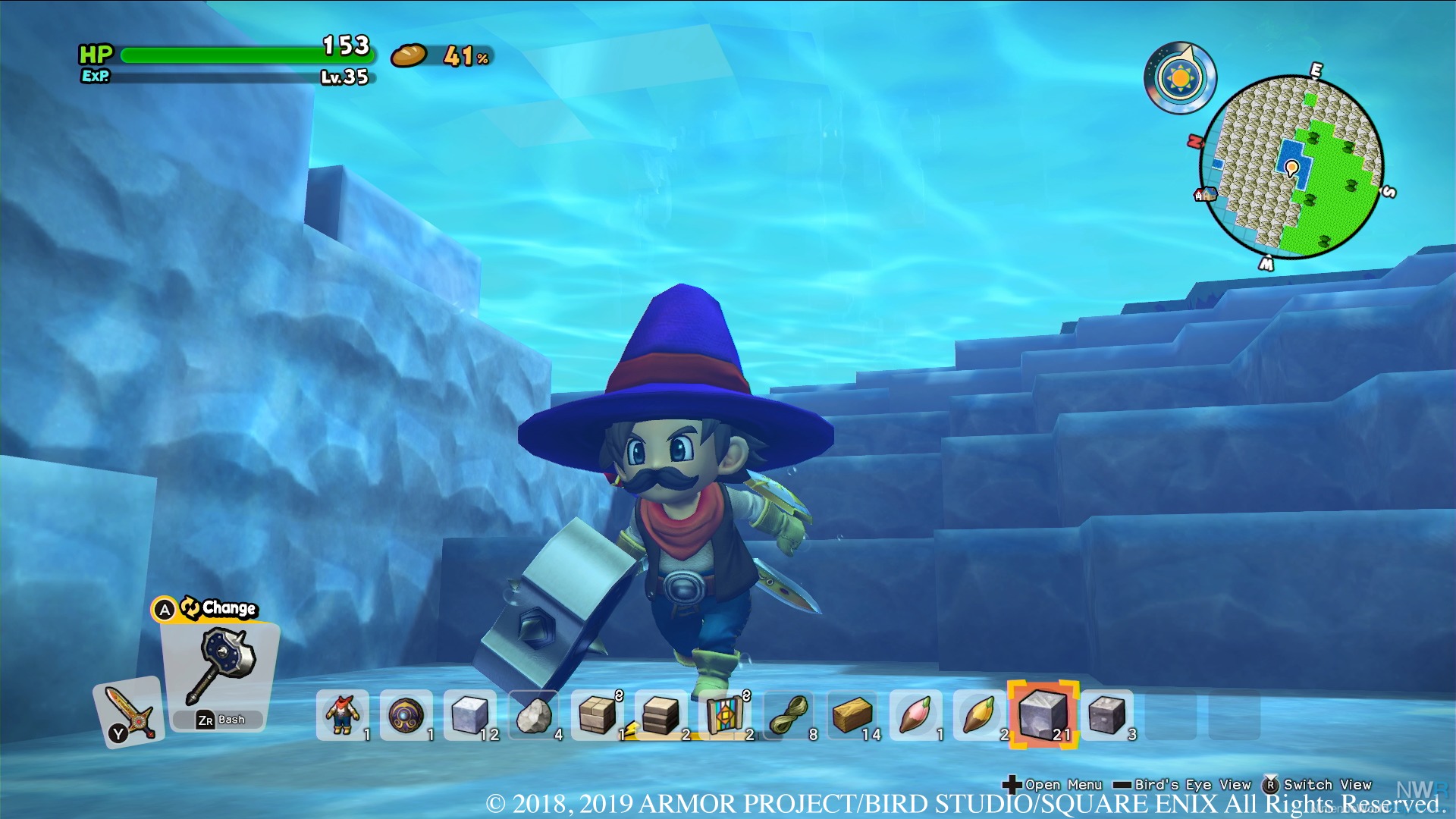 Dragon Quest players will find a captivating story, charming writing, familiar music and sound effects, and satisfying RPG gameplay. I’ve probably played less than an hour of Minecraft and have never really been interested in it, but only in very rare instances did I feel put off by the construction elements of Builders 2. On the flip side, I’ve played and finished nearly every mainline Dragon Quest game, and while they deviate in some significant ways, Builders 2 still has that same heart and soul that makes its forebears so endearing.

Dragon Quest Builders 2 features solid controls, attractive presentation, online multiplayer and limitless charm, but these don’t tell the whole story. Each element of the experience on its own would be less than impressive, but like a pile of wood, bricks, mortar, and steel before its shaped by human hands, the sum of its parts culminate in an impressive and memorable architecture. The small tasks on each island can feel like chores after a while, but then suddenly they won’t. The neighbors you’ve been helping all this time will pitch in and divide up larger projects so the burden doesn’t fall squarely on your shoulders. You might think striving for the title of Master Builder is all about the monuments and landscape you leave behind, but it’s actually just as much about the friends you make along the way.