A great collection of action-RPGs but for a niche audience.

With E3 having come and gone without any mention of expanding the catalog of the Nintendo Service Online to other consoles, it seems that collections will continue to slake our thirst for nostalgia. One such collection that will intrigue those pining for the era of Super Nintendo RPGs comes from our friends over at Square Enix in the form of the Collection of Mana. Not only did they include two fan favorites in Final Fantasy Adventure and Secret of Mana, they also included a title that has never seen daylight in the west: Trials of Mana. The Mana series gained popularity during the RPG era of the Super Nintendo for an assortment of reasons. The stories are well constructed, the music is fantastic, and many enjoyed having an action-RPG alternative to Legend of Zelda. Secret of Mana was also one of the few Squaresoft games that wasn’t turn-based. The mass popularity of the Mana series is the main reason why the English translation of Seiken Densetsu 3 is such a big deal. Western fans have been waiting years for a translation, and had Square not announced a modern remake of Trials for a 2020 release, the Collection of Mana would have been a much easier recommendation for all, instead of the niche crowd it has seemingly been meant for. 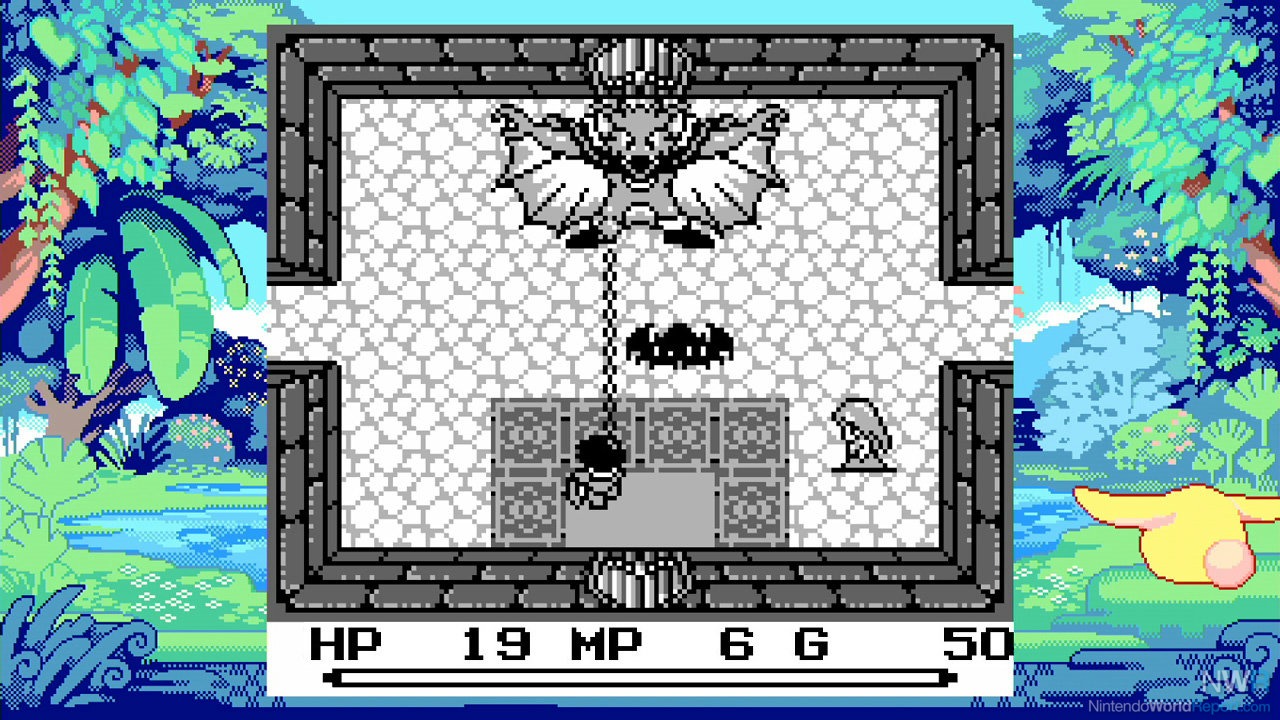 Final Fantasy Adventure leads off the Mana collection with a beautiful port of the Game Boy title. The cleaned-up look of Adventure in a clear pixel-perfect grey scale is an absolutely gorgeous way to play this 28-year-old title. For the more nostalgic, options to play in either the original green or a Game Boy Color version are available; however, there’s no option to change the background behind the video, a problem that is present in all three titles. Unless you have a particular affinity for the title itself or for the original Game Boy in general, your mileage may vary. If you missed it at its original release, think NES Legend of Zelda with RPG elements, spotty hit detection, some frustrating mechanics, and a serviceable localization. As someone who grew up with a Game Boy, I can appreciate how well it’s designed for a portable title from the early ‘90s, but to say it’s aged well would be a stretch. 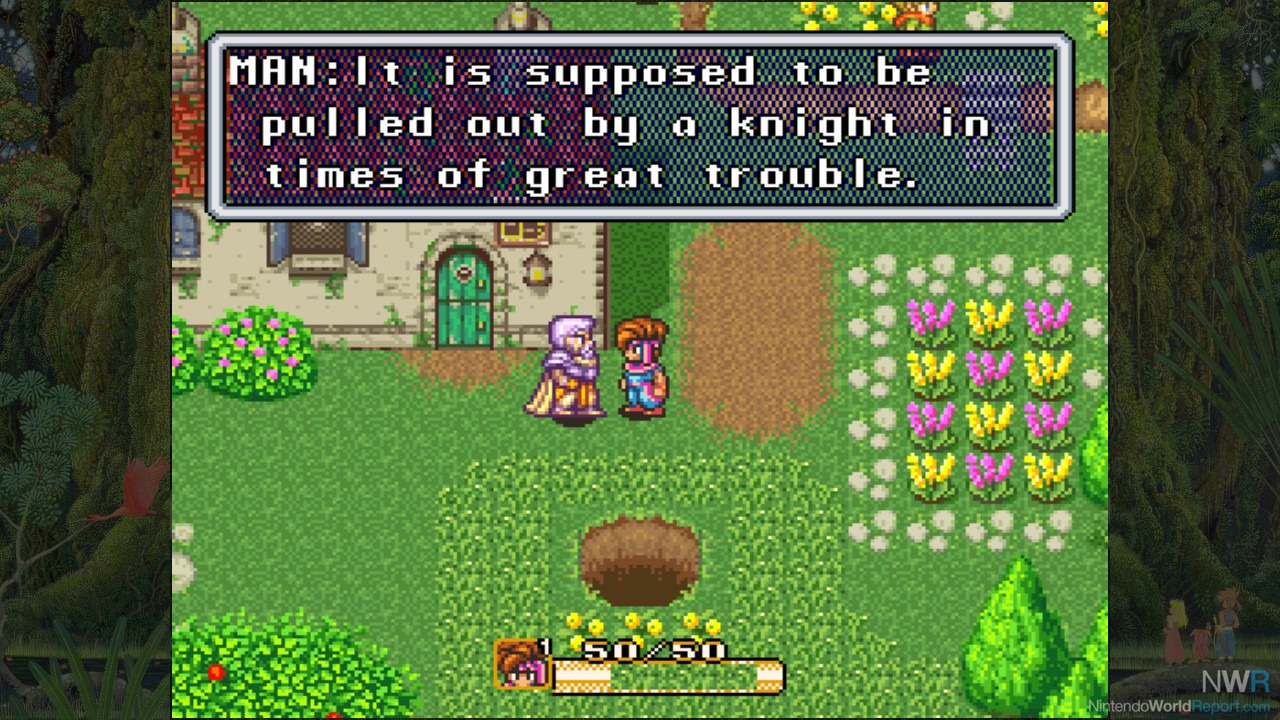 The music remains the best part

The other recognizable title featured in the collection is the iconic Super Nintendo title, Secret of Mana. Unfortunately, it’s even more recognizable if you already own a SNES Mini since the only discernible difference is that the Collection’s version is portable and the Mini’s is not. The port for Switch is essentially the same: save states, the masterful soundtrack is just as enjoyable on Switch, and the colors and amazing sprite work jump off the screen whether in handheld or docked mode. Through no fault of the Collection, the biggest let down is the lack of a serviceable D-Pad, which is even more noticeable if you’re used to playing Secret of Mana with a Super Nintendo controller.

The main attraction, and likely the most important factor for potential buyers, is the English translation of the third title in the series: Trials of Mana. In many ways, Trials of Mana is a much improved version of its predecessor. The journey begins with the selection of a main character and two companions from a pool of six available characters. Each character has a unique introduction that provides context to their place in the world and clarifies their motivations. In all cases, the objective for the party from the outset remains the same: obtain the eight Mana Stones in order to gain access to the sanctuary that contains the Sword of Mana, and with it bring peace to the world. Each of the characters has their own unique personality and their ongoing development keep you thoroughly invested in the outcome. The story beats are well paced and the multiple characters creates a strong incentive for replayability. 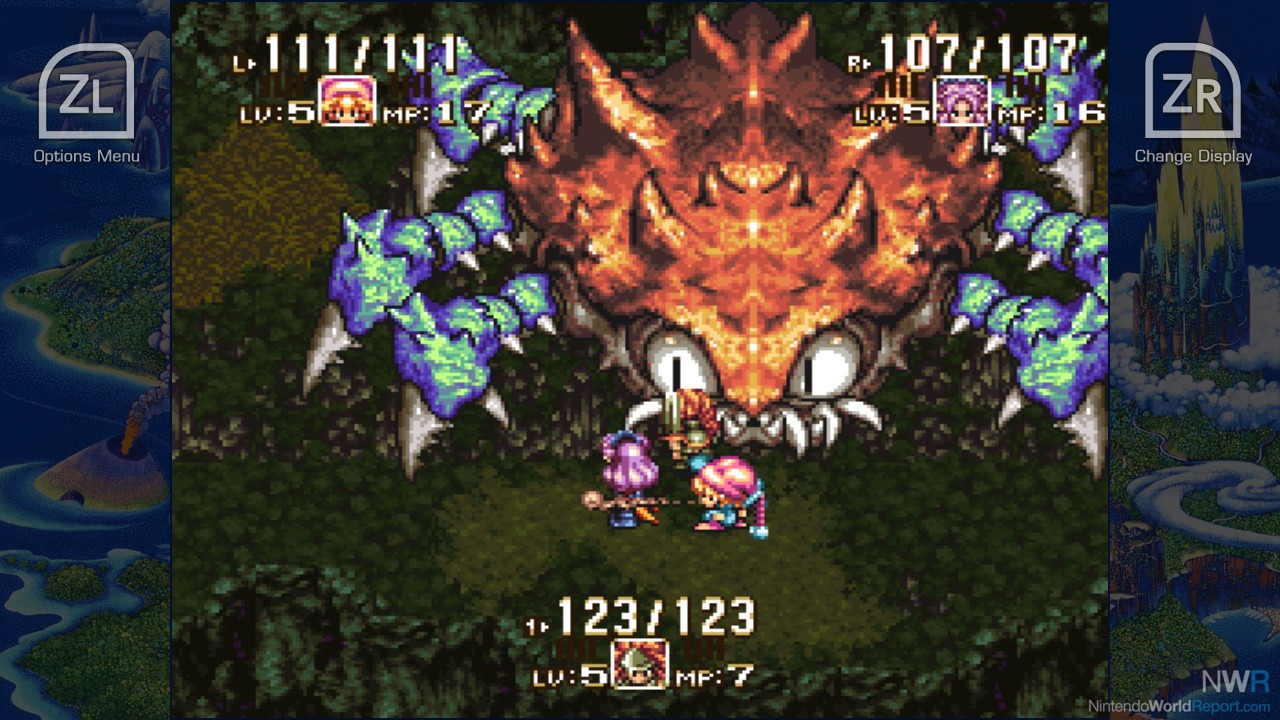 Terrific Mana title, the remake is on my radar

Not only is the story arguably more engaging, but many quality-of-life improvements distinguish Trials from the other two Mana titles. Combat feels more fluid, with screen movement much more centered over the character to reduce enemy ambushes from the edge of the screen. The overworld is constructed in a way that it’s always clear where you should be going next and a neat mechanic is available in certain areas that provides a birds-eye view of the immediate area. Towns typically have something unique and interesting to observe, but it becomes obvious very early on that unique NPC sprites are few and far between as most of the residents look the same as ones encountered previously. The menus and inventory management are intuitive for the most part, which is even more important given the lack of the original manual to explain how things work.

A few small irritations still exist such as having to cycle through characters in order to buy their specific items at shops, but it's possible that the inclusion of a translated copy of the original manual may have avoided some of the confusion. The manual included in the menu is more of a glorified controller layout and the official website that is recommended you visit is rather barren. The same display options exist wherein the 4:3 display can either take up the screen from top-to-bottom or can be slightly shrunk down to take up less of the screen. The localization is very well done, which is a relief since it did take Square over 20 years to finally bring Trials to the West.

Trials of Mana is certainly a title worth your time, but newcomers to the series may want to hold off until the release of the modern remake next year. The Collection of Mana does a fine job of providing faithful recreations of 8 and 16-bit classics for a modern portable system, but make no mistake: all three games show their age. For those who had their formative years during the Super Nintendo era and those that simply prefer 2D sprite-based gaming, this package will serve you well. For everyone else, having the first three Seiken Densetsu entries in one package may not be enough incentive given that the flagship title’s re-invention is just around the corne