The king of Castlevania is back and in fine form.

There seems to be a stigma against games that are funded on Kickstarter, perhaps deservedly so given clear disappointments like Mighty No. 9. But there’s something exciting about taking your passion and ideas directly to consumers, and Bloodstained: Ritual of the Night, a prototypical Metroidvania, was one of the most recognizable and highly-anticipated crowd-funded titles. I’m happy to report that it’s definitely been worth the wait, even if the Switch version has its fair share of issues.

The story of Bloodstained revolves around heroine Miriam who is tasked with subduing her friend and peer Gebel. Both characters are Shardbinders, which means they can absorb demonic crystals to gain special powers, but of course they face a hefty price: the crystals gradually take over their bodies. It is after a 10-year slumber that Miriam awakens to find that Gebel has allied with a powerful demon named Gremory and raised a dark castle from the ground: Hellhold. With her alchemist friend Johannes, Miriam begins her assault on the castle in the hopes of stopping Gebel and freeing the land of the death and destruction he has wrought.

Familiar to those who’ve played Symphony of the Night or the GBA Castlevania entries, Bloodstained’s gameplay involves exploring, backtracking, gaining new abilities, and slaying both minor foes and major bosses. Miriam acquires dozens of mystical powers by defeating enemies. For example, after destroying a bat that swoops down at you, there is a chance a shard will be generated that bestows the ability to summon a swarm of bats as a projectile attack. Certain shards grant movement and puzzle-solving abilities like a double jump or the ability to traverse underwater sections. It’s fun to test out new shards, but because of their sheer number and the need to upgrade them to increase their effectiveness, you are likely to find a handful that you prefer and end up using through most of the 8-10 hour adventure. 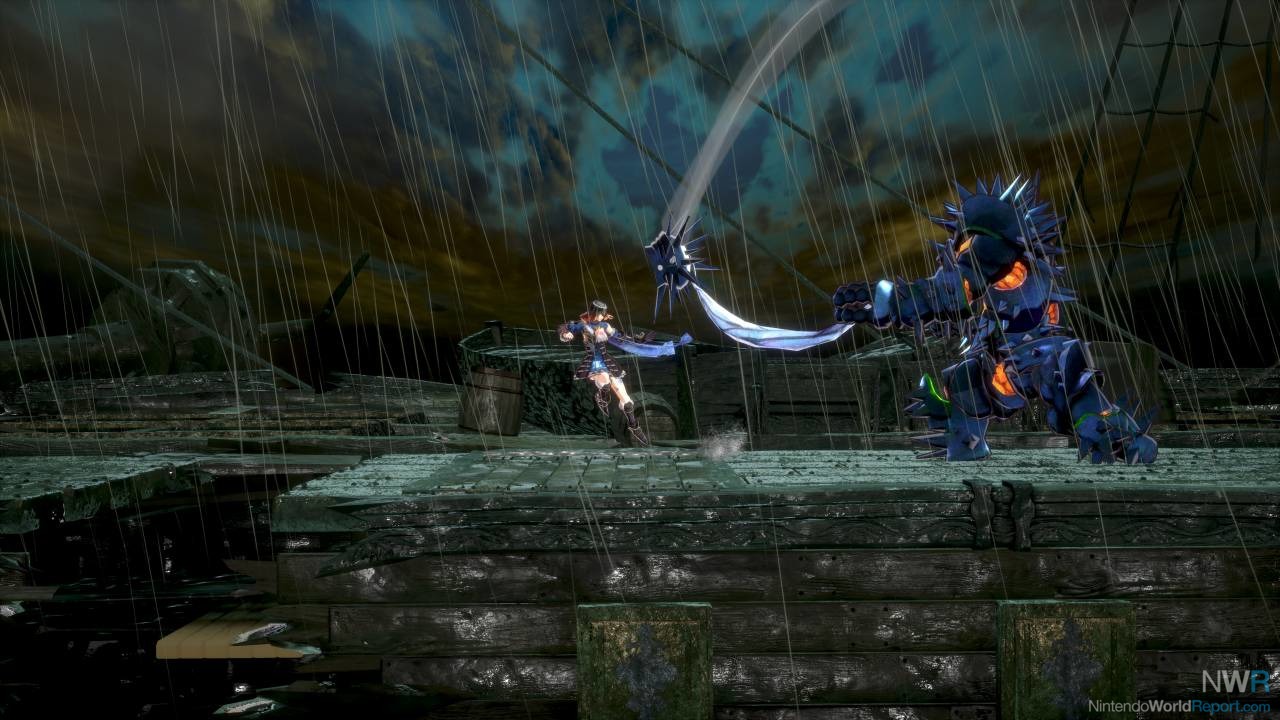 In addition to her Shardbinder abilities, Miriam can also equip different weapons, armor pieces, and accessories that boost her stats and resistances. There are almost as many weapons as shards, which adds variety. You find pieces of equipment in treasure chests and behind hidden walls, but you can also craft and purchase them as well. In terms of weaponry, you have your standard swords, whips, and spears, but there are also guns that can be loaded with different types of ammunition, clubs, axes, and many other variations on these. One neat element of the weapons is that bookcases scattered throughout the world impart knowledge of a special attack that is unique to just a few weapons and can be activated with a fighting-game-like button input. While these attacks look flashy, they don’t seem much more effective than other attacks, and they cost mana better spent on shard powers.

The environments in Bloodstained are incredibly detailed, and each area of the castle has a unique look to it. Backtracking doesn’t feel like as much of a chore because places like the Garden of Silence and the Livre Ex Machina look much different from the Inferno Cave and the Tower of Twin Dragons, for instance. Save rooms refill your health and mana and are found near boss rooms, especially. Fortunately, they aren’t so common as to reduce that feeling of tension and desperation that fits so well with the horror theme. Especially later in the game, you’ll be praying that new rooms you enter contain save spots as the enemies become stronger and the environments more deadly. Fast-travel paintings can also be found in each area, and these help with revisiting old sections of the map to explore previously-unreachable places. 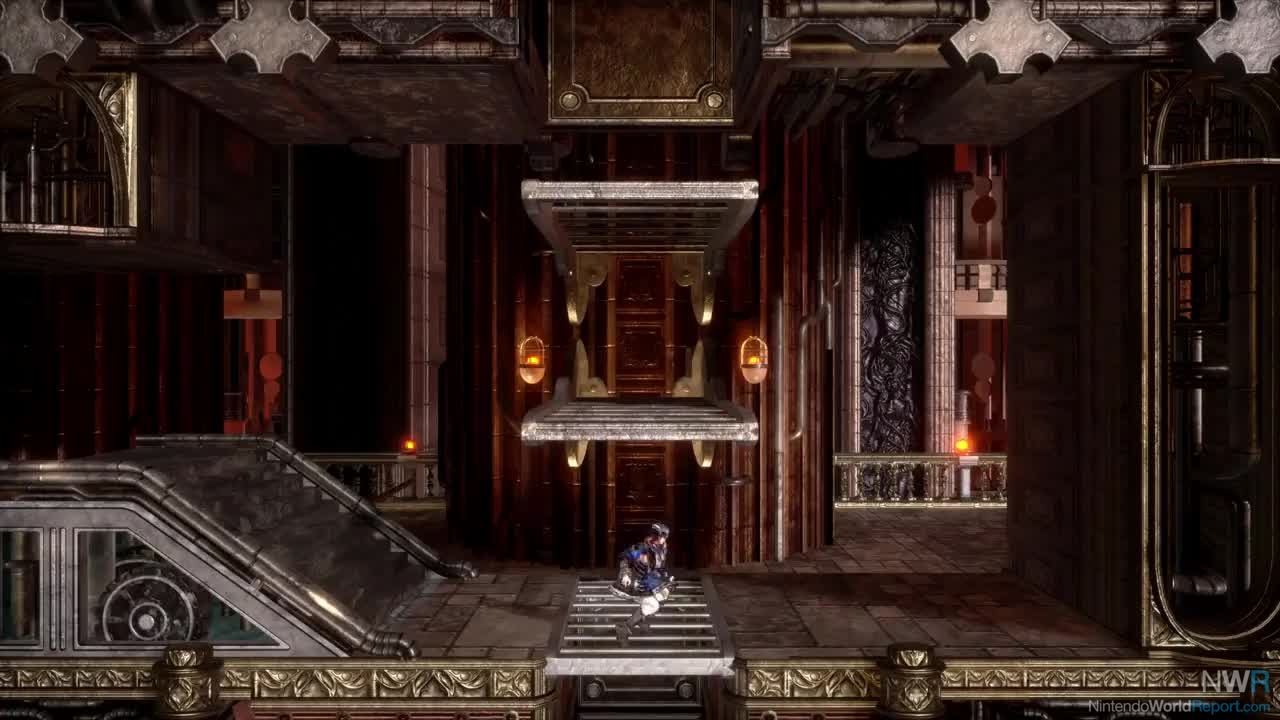 Enemies include your standard gargoyles, haunted suits of armor, and bats, but also more unusual things like giant cats, possessed monkeys, and demonic paintings. One foe you’ll encounter is basically taken straight from another popular Kickstarter game; it’s always fun to see collaboration among indies. Bosses range from larger than life dragons to dangerous and tricky bouts with characters your own size, but each one, especially later in the game, presents a solid challenge. A few encounters had me clinging to my final hit points while I pleaded for each of my attacks to be the finishing blow.

Bloodstained incorporates RPG mechanics in the form of level-ups that come from accruing experience points. Unfortunately, gaining a level never seems to provide a noticeable bump in your stats, nor does it refill your health and mana. This means that the satisfaction of reaching a new level is somewhat muted. More pronounced improvements come from upgrading your equipment and shards, rather than your character. There are also side-quests that reward your with new crafting materials and other items. The quests themselves are fairly basic, though: kill four demons, bring this piece of armor to one NPC, or cook this dish for another. I mostly ignored them and didn’t feel like it affected my playthrough at all. 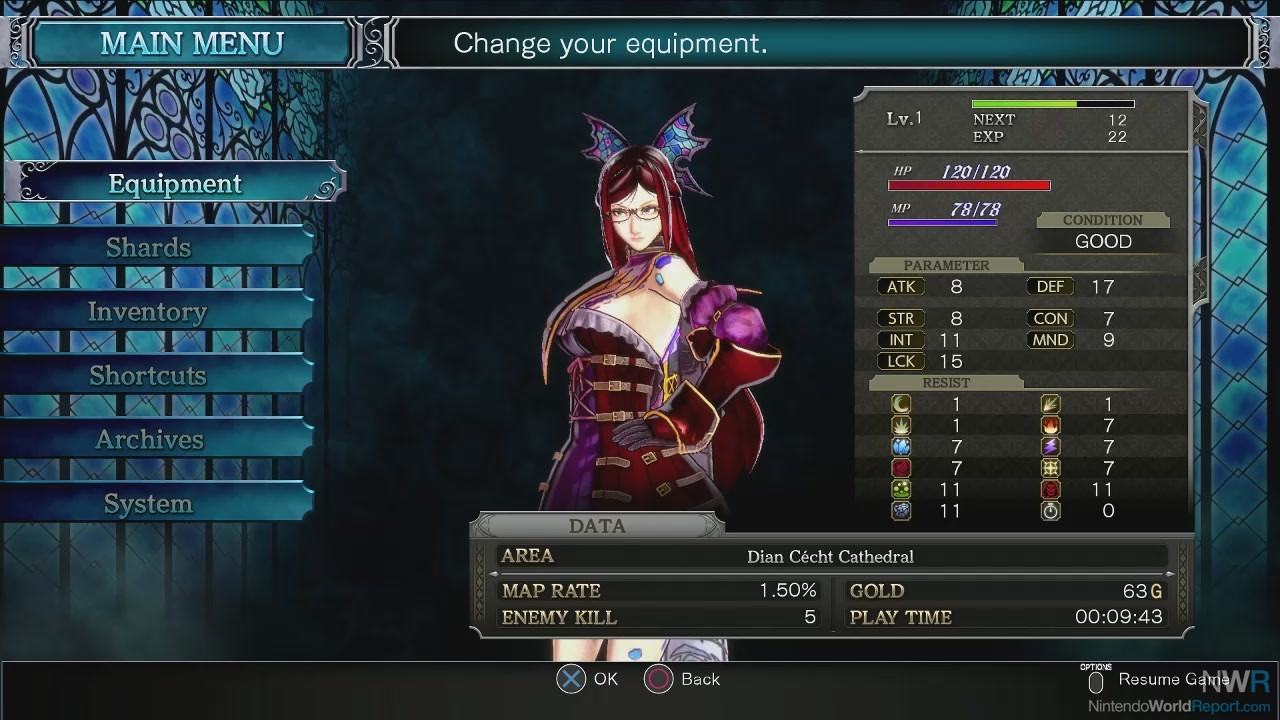 It’s worth mentioning that the presentation and performance on the Switch are not quite on par with other versions of the game. At the time of this review, according to Digital Foundry, Bloodstained typically runs at 720p docked and 576p handheld, and you will be able to see that difference pretty clearly. Given that there is so much detail in each environment you traverse, you may want to spend most of your time playing on a TV, if possible. I actually completed the final three bosses in handheld mode, and frame drops are noticeable later in the game but not game-breaking. In both configurations, though, Bloodstained appears to stick very close to 30 fps throughout the experience. Cut-scenes seem to be the biggest culprits when it comes to creating lag, and more than that they just don’t look all that great compared to the minute-to-minute gameplay. While I started to notice input lag more easily as my playthrough went forward, I didn’t find it all that disruptive to the overall experience.

Bloodstained: Ritual of the Night is a welcome return to the exploration-heavy Castlevania games of the past. Visually, the art style is likely to be off-putting for some, but the gameplay is fun and varied throughout, and finding hidden passages and treasures never gets old. There is also a good amount of freedom in terms of the weapons and spells you can equip, and the music is often a strong accompaniment to each new section of the castle. I can certainly understand people who have a more powerful console wanting to play it there for improved resolution and 60 fps, but publisher 505 games has indicated that they will be pushing multiple small patches to the Switch version to hopefully address some of the reported issues. For my money, the hiccups and graphical downgrades play second fiddle to the thoroughly satisfying Metroidvania experience offered by Ritual of the Night. You don’t quite get to be a vampire killer, but in more ways than one Miriam still slays the game.

Devs revealed a target date of the week of July 15th for the first Switch patch to fix the underlying performance issues. Waiting to see how these patches go before I bite on this one.