Maybe death isn’t so bad, as long as you have access to online guides.

Graveyard Keeper is a bizarre spin on the popular simulation RPG genre, harkening vibes of Stardew Valley except with a much stranger tone. Instead of inheriting a beautiful farm to tend to, you’re struck down by a car and find yourself, presumably dead and in the company of a bouncing skull. He quickly informs you of your new duties as the Graveyard Keeper. Shortly thereafter, you receive a corpse which not only needs to be buried, but first needs to be butchered so you can sell the meat to the local innkeeper. I told you, this game is weird, but it’s also incredibly deep with loads of different mechanics and tech trees to work with. Unfortunately it’s complexity and lack of explanations make it very obtuse, resulting in a lot of time spent looking things up on the game’s Wiki page to fill in the gaps. 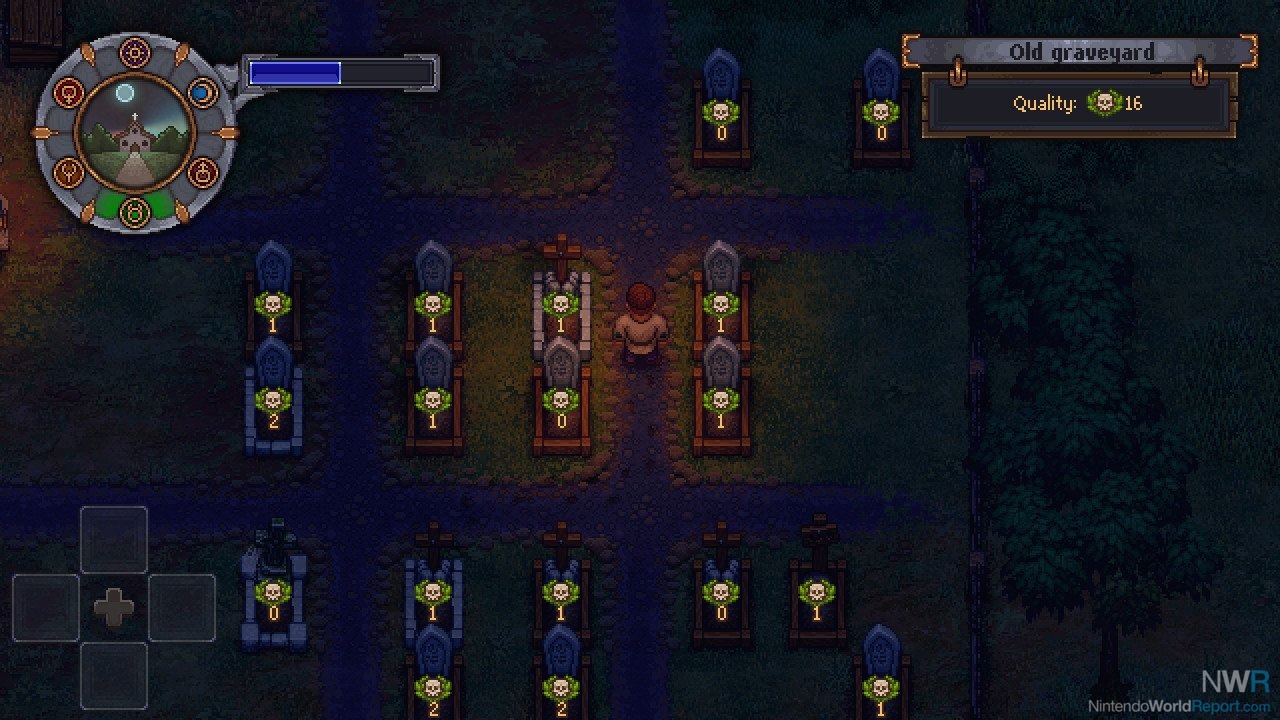 Once the short introduction story ends, you’ll quickly find yourself in the thick of things. A lot is thrown at you immediately, which can be a bit daunting. Key game mechanics such as meeting villagers, receiving a number of different quests, and being introduced to the plethora of technology trees can make your head spin, but after a few ingame days pass, the flow of things starts to click. Corpses arrive via a talking donkey which need to be tended to and buried in a plot. However these bodies have ratings depending on the deeds they did as a living person, which ultimately affects the rating of your graveyard. Ratings also depends on how quickly the body is buried, as it will slowly decay if left above ground. Of course the goal is to grow your graveyards rating, so all the factors need to be accounted for. This is just a glimpse at how complex systems can get and that’s not even taking into account decorating the grave with tombstones, fences, and the likes which bolster the rating.

When not channeling your inner Dampe, a large portion of the day will be spent gathering materials and crafting. Chopping down trees to harvest wood, searching for nods to gather ore, collecting sand from the beach; all these can then be used to craft a bunch of useful items or components needed for other patterns. Alternatively, there are places in the village to purchase things, but obviously coming at a financial cost, making it always better to craft when possible. Both gathering and crafting comes at a cost as well, however in the form of energy. Sleep restores energy free of cost, but will make time pass, which leads to missing events that happen on specific days. The other option is to eat food which can be cooked or purchased. Managing energy consumption can be a daily struggle, especially when trying to tackle multiple objectives. 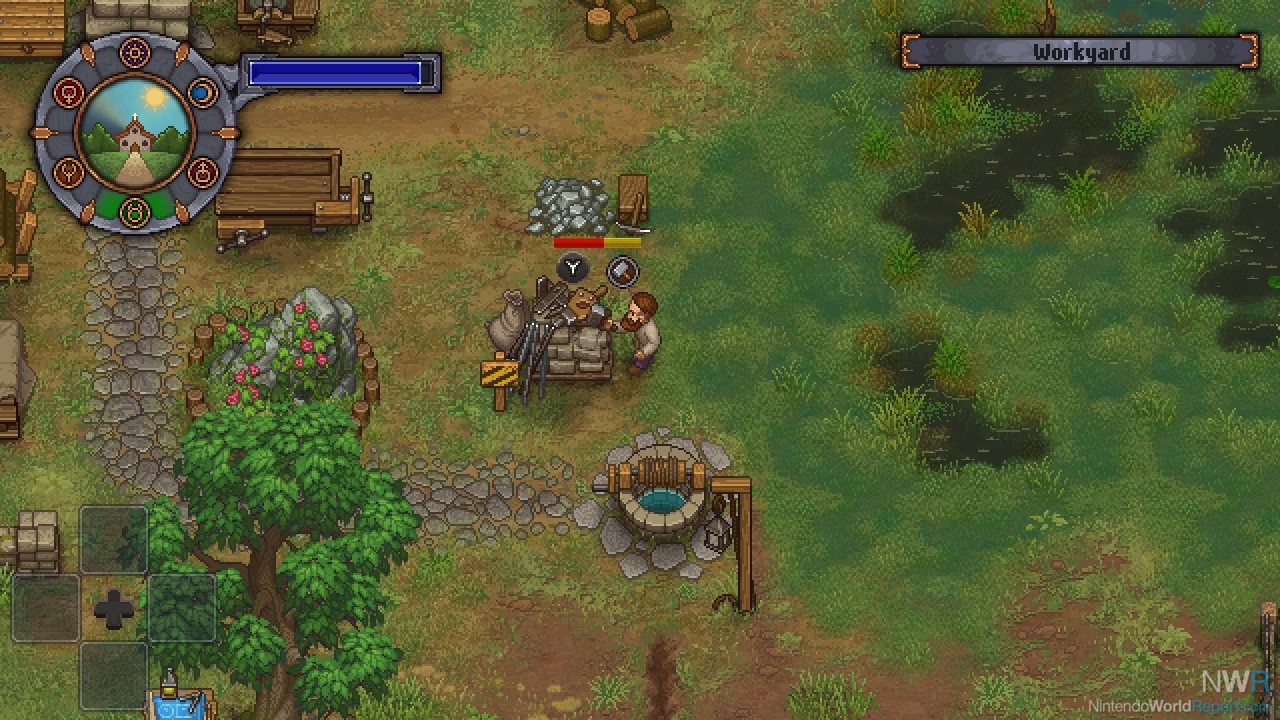 Throughout the day by completing different tasks, you’ll earn tech points that can be spent in the branching technology trees. Physical labor generates red points, anything involving organic materials rewards you with green points, and the last and easily the most difficult to come by are the blue points, which are earned through knowledge related tasks such as studying. Red and green points are earned early and often which allow you to start unlocking new technology branches. Doing so expands upon what can be crafted and allows more flexibility in earning money and progressing the story. Eventually I got to a point where I needed blue points to continue to unlock new techs and for the life of me couldn’t figure it out. After extensive online research I found the answer, but even then it was a struggle to achieve them. Sadly this tends to be a common theme with Graveyard Keeper. Technology trees and crafting systems are robust and feel rewarding as you get deeper, but more often than not getting to that point requires a lot of time searching online. The constant need to pause and refer to a guide ends up really disrupting the rhythm of gameplay. 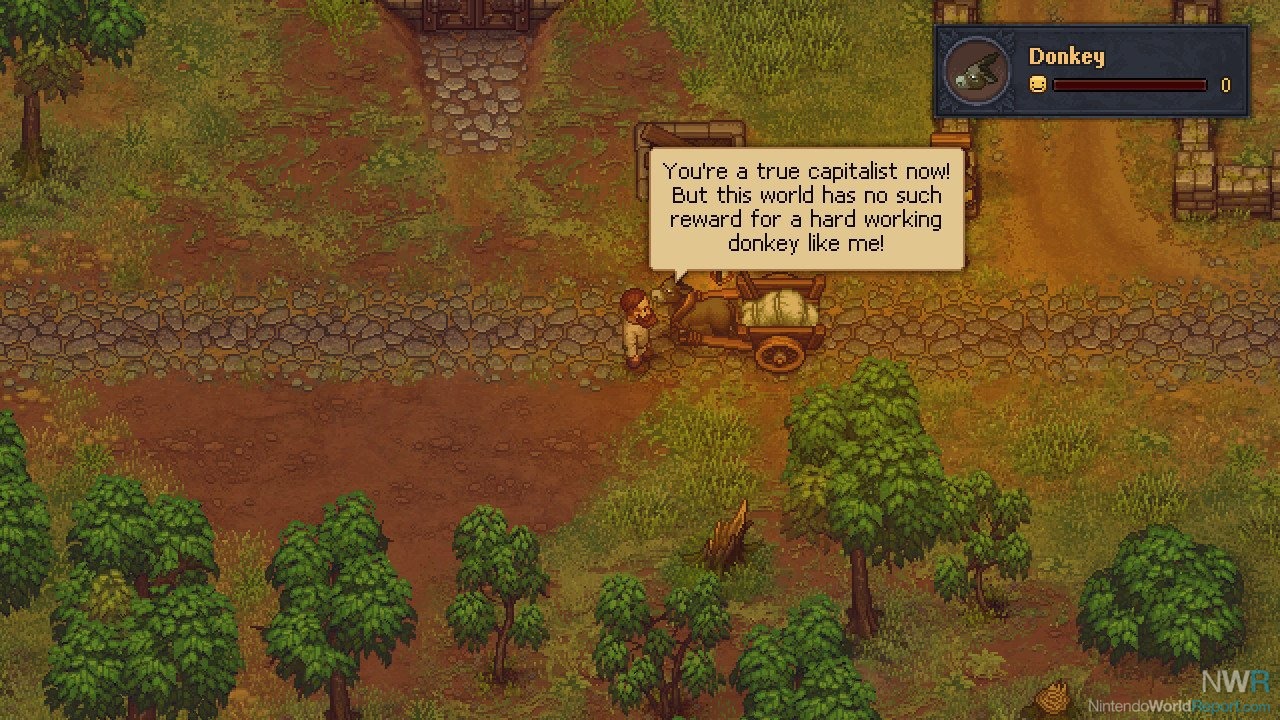 Initially it may seem that the daily routine would revolve 100% around the graveyard and crafting, but there is plenty more than meets the eye. Expanding your house, farming, combat, and even building up and growing a church are other ways to spend the day. Quests from townsfolk help to push you in different directions, but a lot of the time it felt like a quest would require an item that I would then need to do four or five other things to eventually get. Interacting with characters brings the comedic aspect of the game to light, notably within the dialogue. Talking to certain characters, specifically the donkey was always hilarious, adding another layer to the already fantastic atmosphere. The pixelart is wonderfully done especially with the changing weather which makes familiar areas feel different, particularly when the fog rolls in. Occasional visual glitches crop up where an NPC will disappear when talking to them, but only for a moment before reappearing.

Graveyard Keeper is a strange beast, offering a truly unique spin on the management sim. It’s systems are robust and plentiful, but frankly many are downright confusing. The developers decided to do the player no favors, leaving much of the complexities a mystery without searching online. That is enough to scare some away, but if it isn’t a dealbreaker, there’s more than enough here to keep you busy for hours on end.