I really enjoyed Rock of Ages back when it launched in 2011. It took competitive Monkey Ball and combined it with tower defense mechanics. As if creating an Odama-style mash-up wasn’t creative enough for developer ACE Team, they dressed the game up like a Monty Python animated segment. The slapstick humor rewarded knowledge of art, history, and culture with additional layers of comedy. Simply put, Rock of Ages 2 is more of the above. If you liked Rock of Ages, go get the sequel; if you didn’t then don’t. And if you never played it, I think you’ll probably like Rock of Ages 2. Read on to see why.

I compare the core gameplay to Rock of Ages 2 to Monkey Ball, because the core gameplay loop has you rolling a giant boulder down a ramp, fighting to stay on the track and avoiding pits and hazards. The goal is to reach the bottom and break through the enemy’s gates. Yes, the enemy. Each stage of the game has our hero, this time the titan Atlas who has escaped from his duty to hold up the world, encountering a historical or mythological figure or famous subject of art. A silly conflict inevitably sets them at odds and now both sides are racing to smash the gate and crush their famous foe under the boulder. 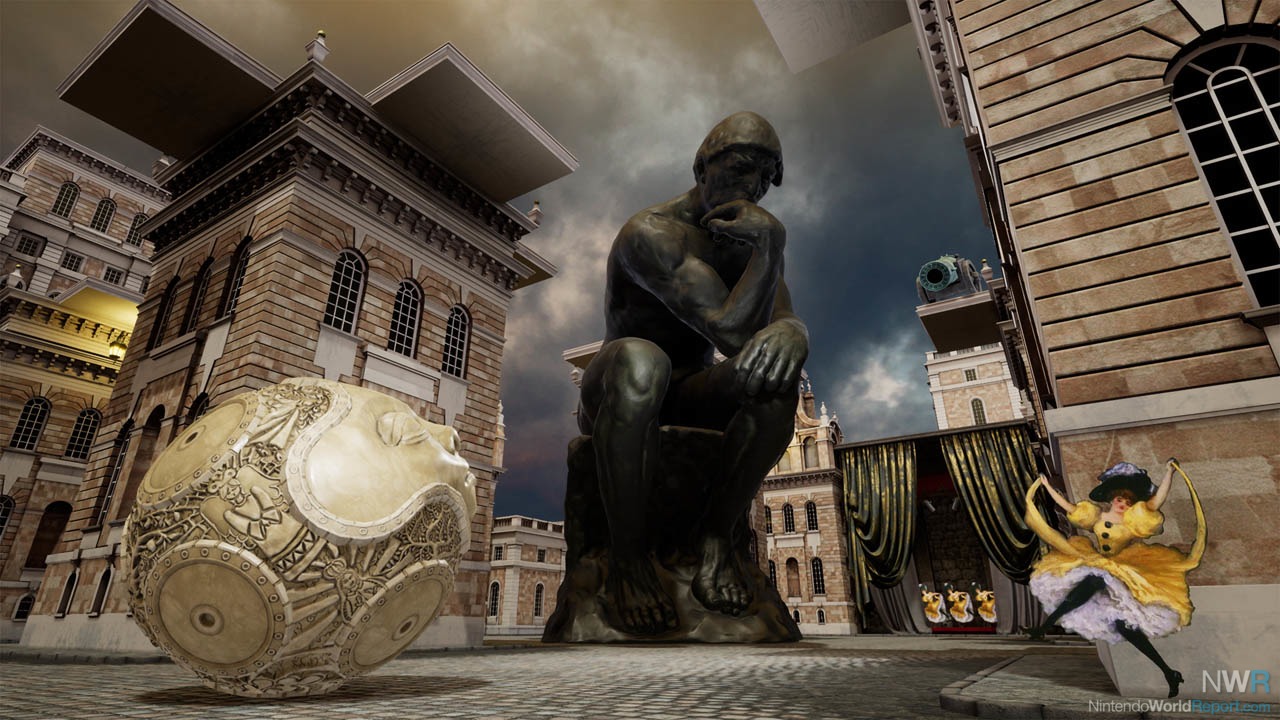 Don't think too hard about it.

After a boulder is lost or crashes into the gate a cooldown starts where the next one is “crafted.” During this time the tower defense mechanics come into play. Both you and your opponent have identical paths, and you can use the downtime to buy weapons and traps, ranging from trebuchets to fanciful airships bristling with cannons, to giant bulls that ram the opponent’s ball off path. Clever combination and placement of traps will frustrate the opposing boulder’s progress, buying you more time to land hits on the door. This is vital to winning the race to crush your opponent.

Overall, I enjoy both gameplay beats. However, I found some of the stages in Rock of Ages 2 are over-reliant on platforming, because yes, the ball can jump. Weirdly, it seemed like these were front-loaded, while I was still struggling to get used to the physics of controlling a giant careening boulder. I started having a lot more fun once it clicked. The tower defense component at times feels extraneous. It’s definitely the weaker mode. Often times it feels like I just need to spam the same four traps at all turns to buy me enough time to win. This is fine in the late game, but early on you only get a limited number of traps while the AI has access to everything. This means your first introduction to tower defense is inarguably not a fair one, and it poisons the experience of the already less-enjoyable mode going forward. I understand the need for it, if you could just roll the ball after each one is lost it would be really repetitive and over far too soon, but a Rock of Ages 3 needs to focus on improving that mode. 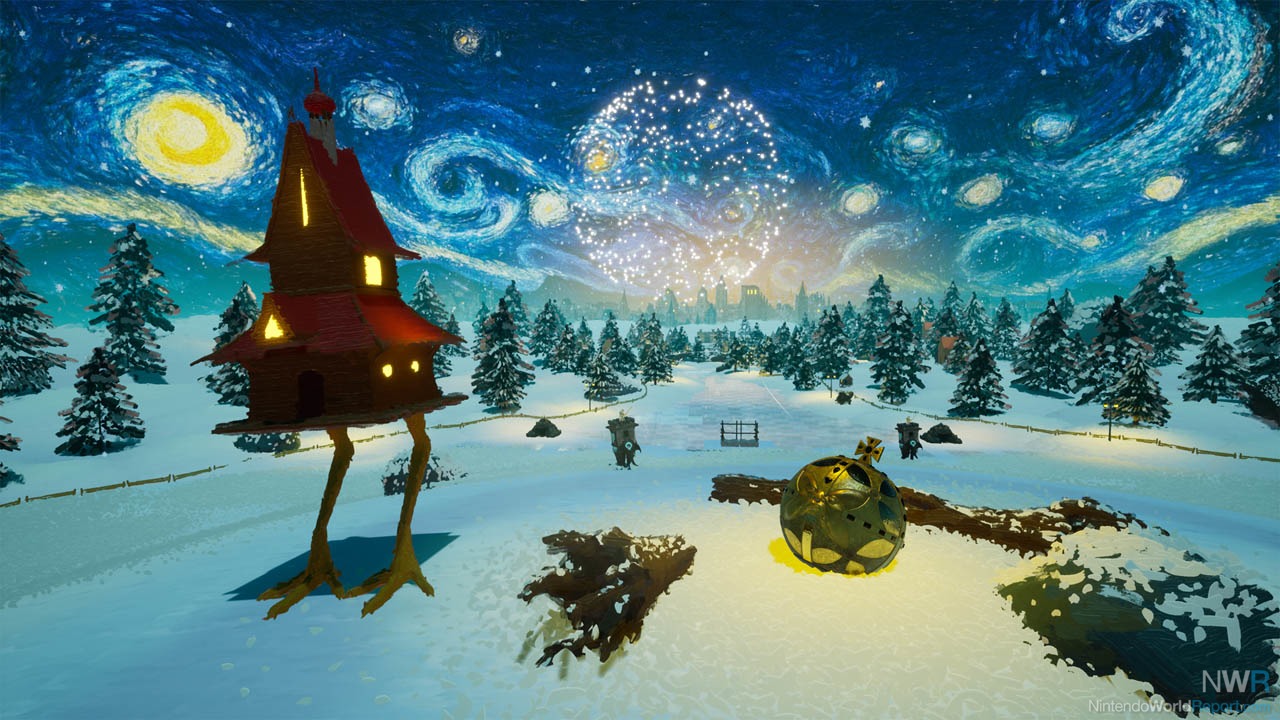 Yes, it's "The Holy Hand Grenade."

The thing is, for my complaints about the gameplay, I just don’t care. The presentation in the Rock of Ages series is an absolute delight. All the characters are depicted like paper puppets, made from famous pieces of art. Their arms flail about and lips flap in rough comedic fashion, drawing clear inspiration the animated sequences of Monty Python’s Flying Circus. Atlas, who’s visage is lifted from ancient depictions, has given up on his duties of holding up the world. He finds himself on the run from God, as depicted in Michelangelo’s The Creation of Man, who is intent on putting him back to work. Atlas’ madcap flight sees him come into conflict with figures such as Jeanne d'Arc (from medieval art), who’s devotion to God seems to even creep out Atlas’ divine pursuer. The game uses art from all over history: Egyptian tombs, The Scream, The Sistine Chapel, The Burning Giraffe, and even van Gogh (with and without ear). The jerky animation, mumbled speech, contrasting art styles, and goofy sensibilities are frequently hilarious. The cutscenes between levels are by far the best part and are a constant delight. ACE Team’s writers are really smart at making really dumb jokes.

My only complaints on the presentation are more utilitarian. The font size is confoundingly small. The menus for picking traps aren’t great. Some of the menus could be cleaned up. Strangely, playing it in handheld mode makes all of the above less of an issue, and it seems to run just fine in handheld or docked.

Rock of Ages 2: Bigger & Boulder is a good game with a great sense of humor. A worthy sequel to ACE Team’s first Rock of Ages title, fans of its predecessor are sure to find Bigger & Boulder a worthy successor. Some of the stages overemphasize jumping, and the process for unlocking traps seems to give too much to the opponent. I wish I had more fun with the tower defense mode, but the fun the presentation provides helps smooth over these concerns. If you’re looking for a laugh on your Switch, you’re not going to find anything on Switch more willing to laugh at itself than Rock of Ages 2. In spite of some of my gameplay concerns, I recommend it.