Long may the spirit behind this licensed game reign.

When I first came across the Reigns series on Switch last year, I was struck by the playful narrative tricks on display in the simplistic swipe-left-or-right ruler sim. The style of Reigns: Kings and Queens was awesome especially when coupled with fun writing, with the downside being the repetition. Of note was how the first stab at the game, the Kings portion, felt staid when compared to its better half sequel, the more fully realized Queens part. With refinement and iteration, Reigns became stronger from game one to game two. Now, just in time for the final season of Game of Thrones, here comes game three: the HBO tie-in Reigns: Game of Thrones. While the repetition is still present, the clever implementation of so many “What if?” style Game of Thrones plots helps make this a dynamite licensed project worthy of the world of Westeros. 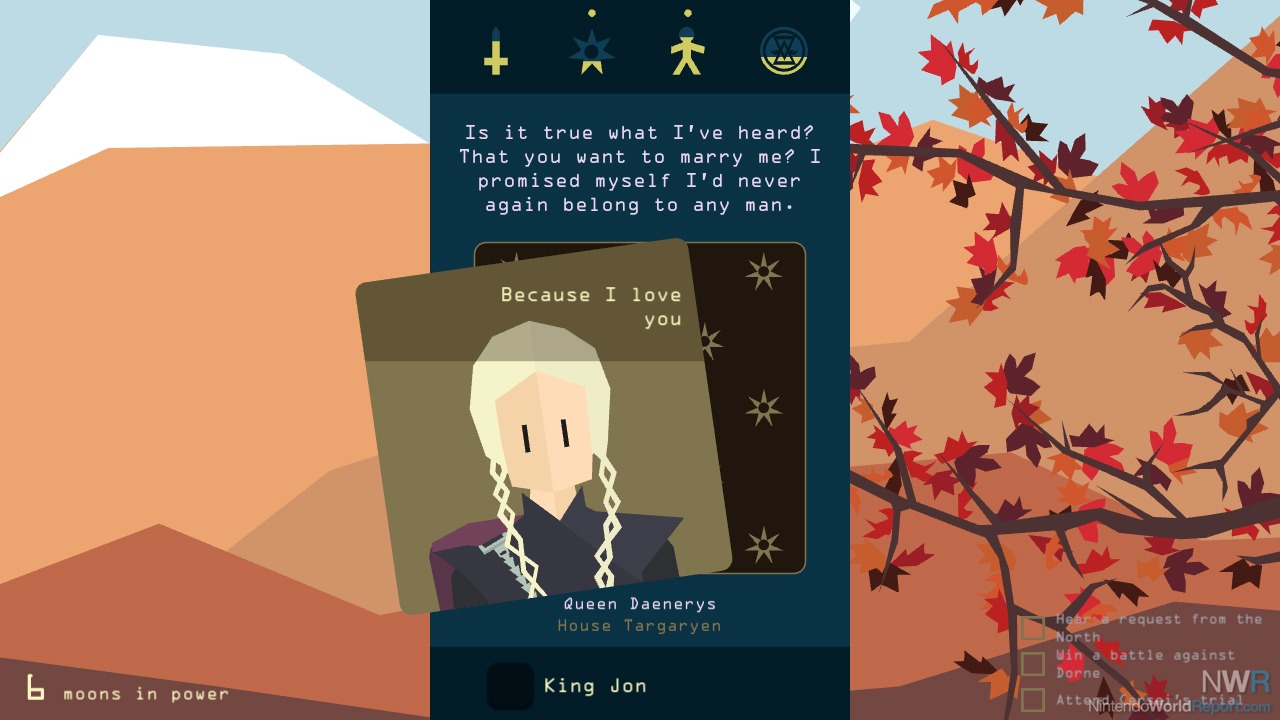 Reigns as a series involves making many decisions as a ruler of a kingdom by choosing between two prepared responses to a character’s question, request, or comment. Publisher Devolver Digital refers to it as a “swipe-’em-up,” since the common action is to swipe left or right to make your choice. Your reign as a ruler will often be brief, as you manage four different meters, tied to things like religious approval and finances, and avoid having any maximize or bottom out.

The hook for the Thrones version is that Red God worshipper and overall crazy fire lady Melisandre has various visions of possible futures for the world, allowing multiple characters to sit upon the Iron Throne and rule the kingdom. You begin as Daenerys Targaryen, but quickly through your actions, you unlock other series regulars including Jon Snow, Arya Stark, Cersei Lannister, and more Starks and Lannisters. It’s a great way to allow players to pursue Elseworlds-esque tales in the Game of Thrones universe, letting you play fanfic god to the many characters. Even the characters you speak to are all mostly from the series, so if you really want to be a jerk to Varys, you totally can. 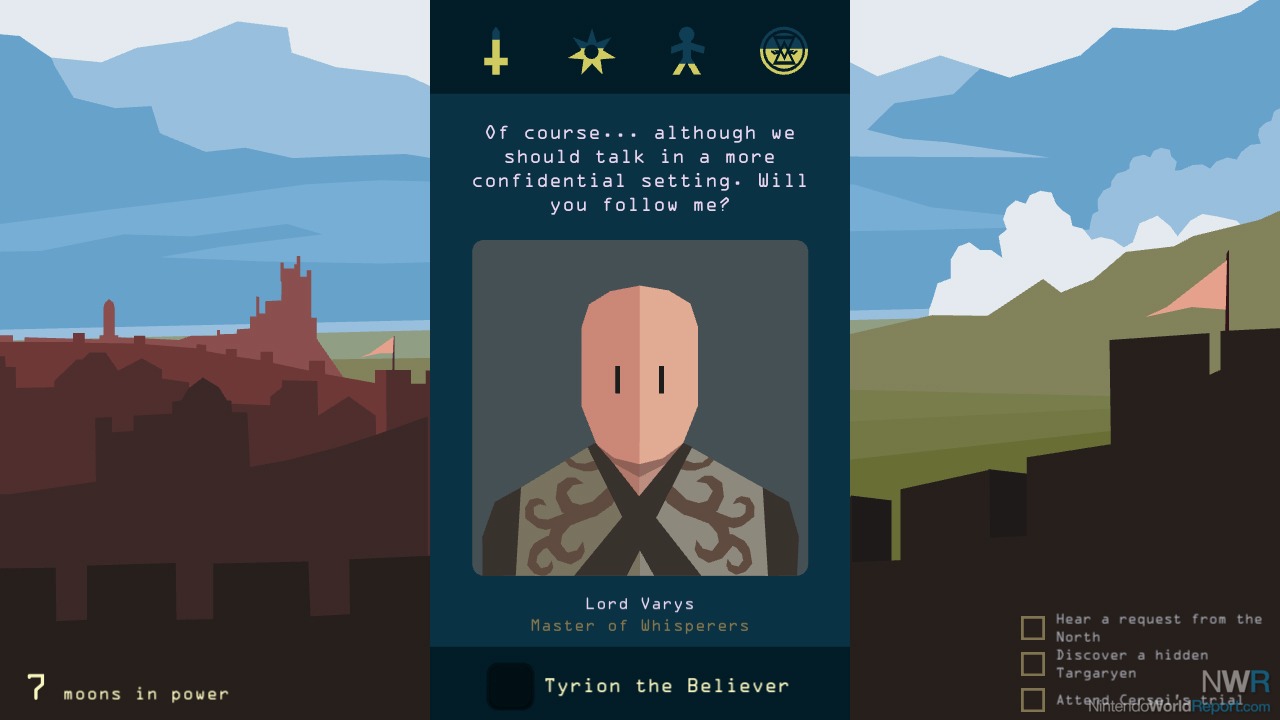 I primarily played through the game in two different manners. My first run with a character would always be to try to play them straight; what would Dany do in this situation? After my inevitable failure, I’d replay it with a more cavalier attitude. That’s encouraged, as you unlock different characters, events, and more by exploring different pathways. Your choices will determine if you unlock new characters, but for better or worse, it’s a bit of a dice roll as to when different characters will show up. The mystery and surprise are fun, but I often hit a wall when trying to trigger the unlocks of different characters.

By that same token, it feels like most of the unlockables are tied to only a few characters. Those characters seem to have the most variety in their stories, but even still, it felt like I had less of a reason to toy with every character. While discovering the eight other playable rulers is a big part of the drive, multiple objectives offer you more challenges to execute. You’ll be given the name of three objectives, something like “Discover a lost Targaryen,” giving you a clue as to what to seek out. It’s occasionally a little obtuse, but generally if you play the game, new objectives will be uncovered. 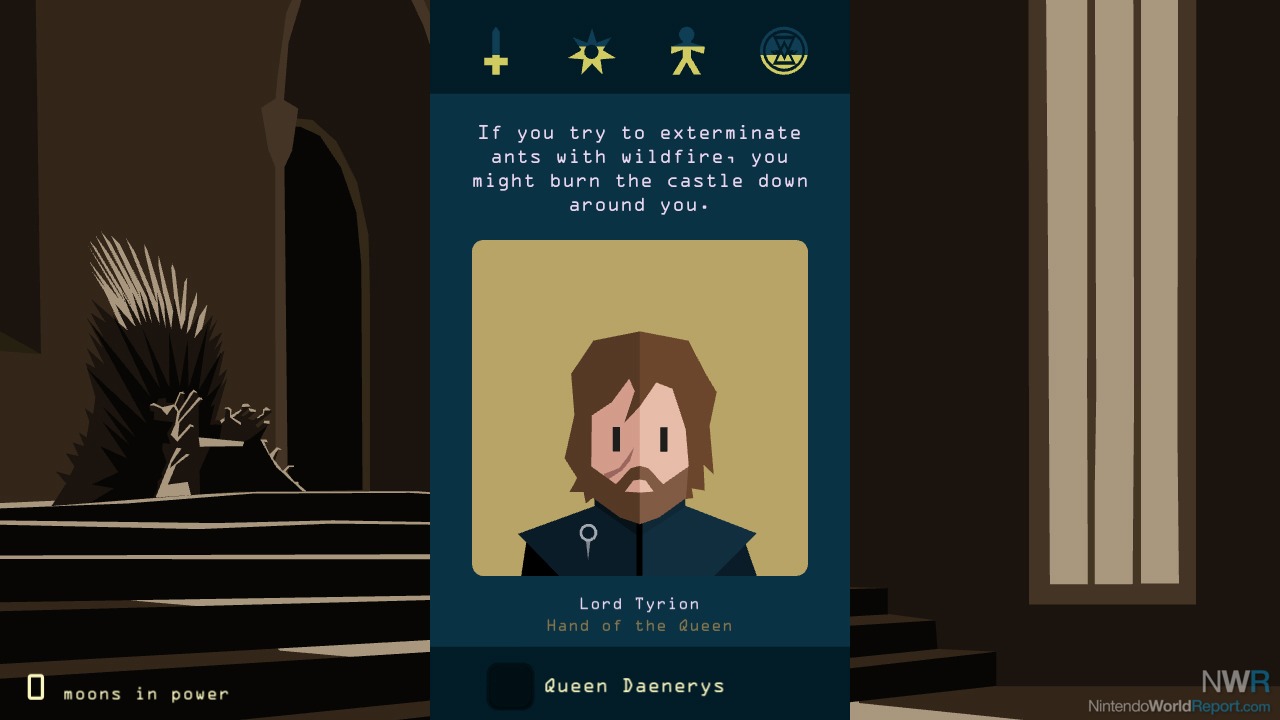 To achieve all those objectives, you’re going to see a lot of the same prompts and circumstances. While it’s still engaging and fun, the more you see the same scenarios, the more it feels like a chore to play through. Nestled behind each of the nine playable rulers is an overall win condition, which is true to each character and is rewarding to figure out or stumble upon, but the path to get to these enjoyable ends is often fraught with stale recurrences.

Reigns: Game of Thrones delighted me with fun winks and nods and charming writing, but inevitably winter metaphorically comes and the going gets repetitious. Even with the quick burn, I love all the references and wish fulfillment on display as you get to live out the fanciful reigns of Queen Arya, King Tyrion, and many more. This is an excellent use of the Game of Thrones license despite some inadequacies.