Quite possibly the best twin-stick roguelike on the Switch.

The Switch certainly has no lack of roguelikes or twin-stick shooters, with some genuinely great offerings on the platform. These come in many different shapes and forms, but with the release of Nuclear Throne, there’s a new sheriff in town. This brutally tough top-down roguelike presents a wide range of variation between characters, weapons, and power-ups, making each run feel truly unique. The difficulty may scare off some, but for those willing to take a beating on the path to the throne, you’ll be in for a treat.

Nuclear Throne is a true roguelike, meaning each attempt is unique from one another, presenting different level layouts as well as obtainable power-ups. The goal is to reach the Nuclear Throne itself, but in order to do so you’ll have to pass through a magnitude of levels, disposing of all the enemies along the way. This starts off relatively tame, keyword relatively, but quickly ramps up the challenge and only continues to push the envelope the closer you get to the main objective. It controls similarly to most twin-stick shooters, taking aim with the right stick, movement with the left stick, and firing off rounds with R. Switching between weapons is done with a single press of the button, feeling seamless as you blast through hundreds of baddies. As enemies drop dead you’ll collect Rads, little green vials, which act as experience and upon collecting enough, will level up your character allowing you to select a mutation after the completion of the level.

Power-ups are vital to your success, helping give agency on how the run will play out. After leveling up, the option of four random power-ups are presented between stages, each with varying buffs for the player. Prefer a more defensive style of play? Well you may decide to use the mutations that increase health and ammo drops or go with the ability to negate explosive damage when under a certain HP threshold. Maybe you want to dish out more damage and decide to take the increased weapon type damage. Mixing and matching these abilities are rewarding and with some luck, can really make you feel empowered leading to a deep run. 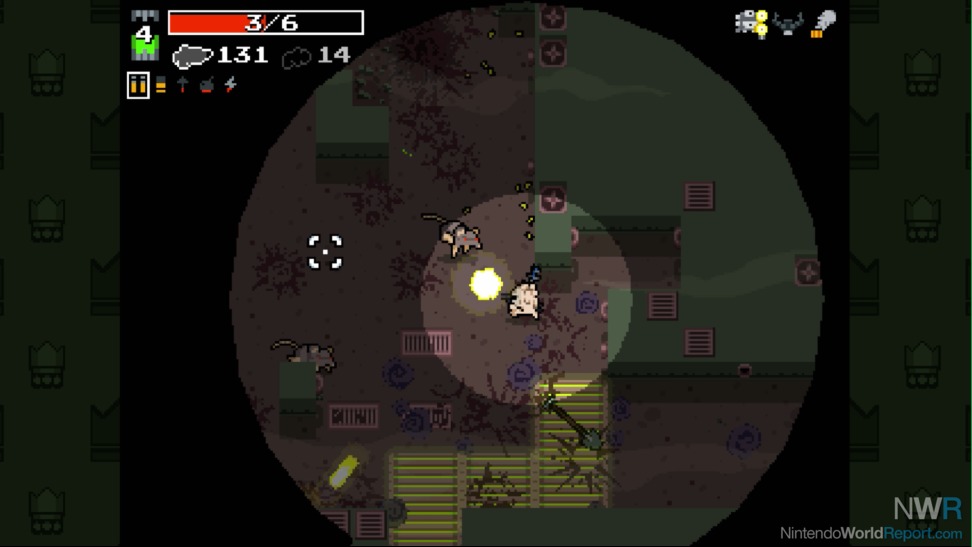 Power-ups aren’t the only way to make each run feel different. A total of 12 characters are available to choose from, each with a unique skill that sets them apart from the others. They won’t all be available at the onset, but by progressing further into the depths new characters will be unlocked to play with in subsequent runs. The different skills are really a joy to experiment with and finding the right one will be dependent on your preferred style of play. For instance, the Crystal starts with added HP and can soak up damage by pressing L. The Plant moves quicker than other characters and can shoot out a root which snares and slows enemies. One of my favorites, Melting starts with only 2 HP, but not only gains experience faster than the other characters, but can blow up corpses which is both incredibly satisfying and beneficial. This character embodies the true nature of Nuclear Thrones risk vs. reward gameplay, giving you extreme power, but at the cost of being a puny weakling. It was always a pleasure to unlock a new character because it allows you to tackle the objective in new and exciting ways. 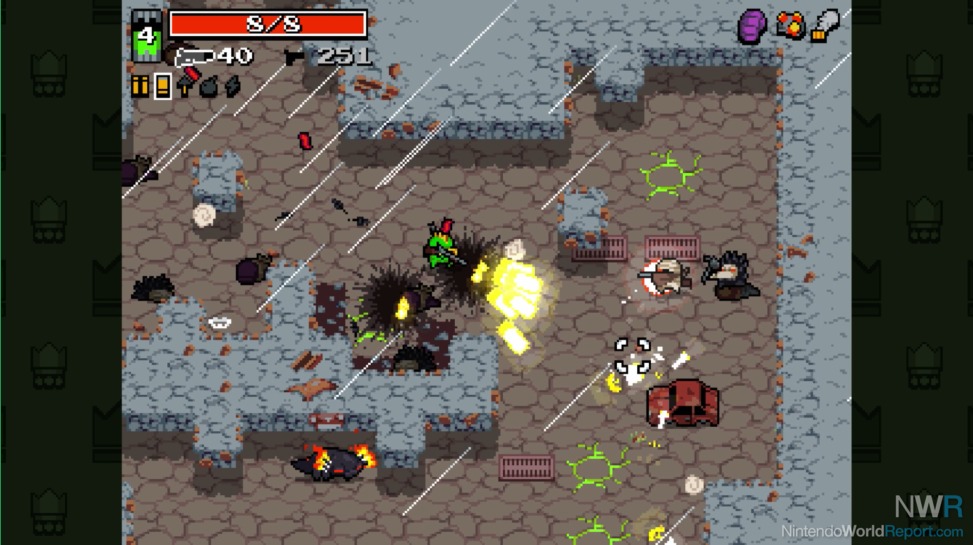 Continuing the theme of risk vs. reward, it comes into play with almost every weapon choice you have on the battlefield. Early on pretty standard weapons make the choices simple, but while the introduction of guns such as the triple or quadruple machine gun seem enticing, they blow throw ammo so fast you’ll find yourself praying for ammo drops. Others like the disc gun shoot out a circular saw that bounces off walls, but runs the risk of bouncing back in your direction which can lead to an untimely and frankly embarrassing death. Certain weapons also share the same ammunition pool, meaning you likely won’t want to double up on one type and find yourself running around without a way to attack. This helps promote switching up weapons on the fly and I even found myself picking up one I knew I wouldn’t want long term only to conserve bullets for my desired weapon. Heck, there are even melee weapons which deflect incoming fire, but obviously require you to be in the thick of it to deal out damage. Overall I found the weapon selection to be robust and full of fun weapons to use.

When it boils down to it, there isn’t too much negative to say about Nuclear Throne. It runs flawlessly in both handheld and docked modes, the pixel art looks great with interesting character and enemy design, offers co-op play, and the amount of variation between each run keeps it fresh as you slam your head against the wall again and again on the way to the throne. The difficulty is absolutely harsh and is sure to turn some off, but feels completely fair, outside of the rare fake chest which can quickly destroy an otherwise promising run. However, no matter how frustrating a death can be, I constantly found myself right back into it without a second thought.