It’s like if Wario’s Woods were burned to the ground.

When I first saw Treasure Stack in all of its inspired-by-Wario’s-Woods glory, I was excited. Even if it just had content similar to Wario’s Woods, with two single-player modes and a multiplayer option, it sounded awesome. Unfortunately, despite some great puzzle game mechanics, Treasure Stack is a sizable disappointment as it offers almost nothing as a solo experience and is heavily dependent on an online mode that, during its debut weekend, was mostly barren. 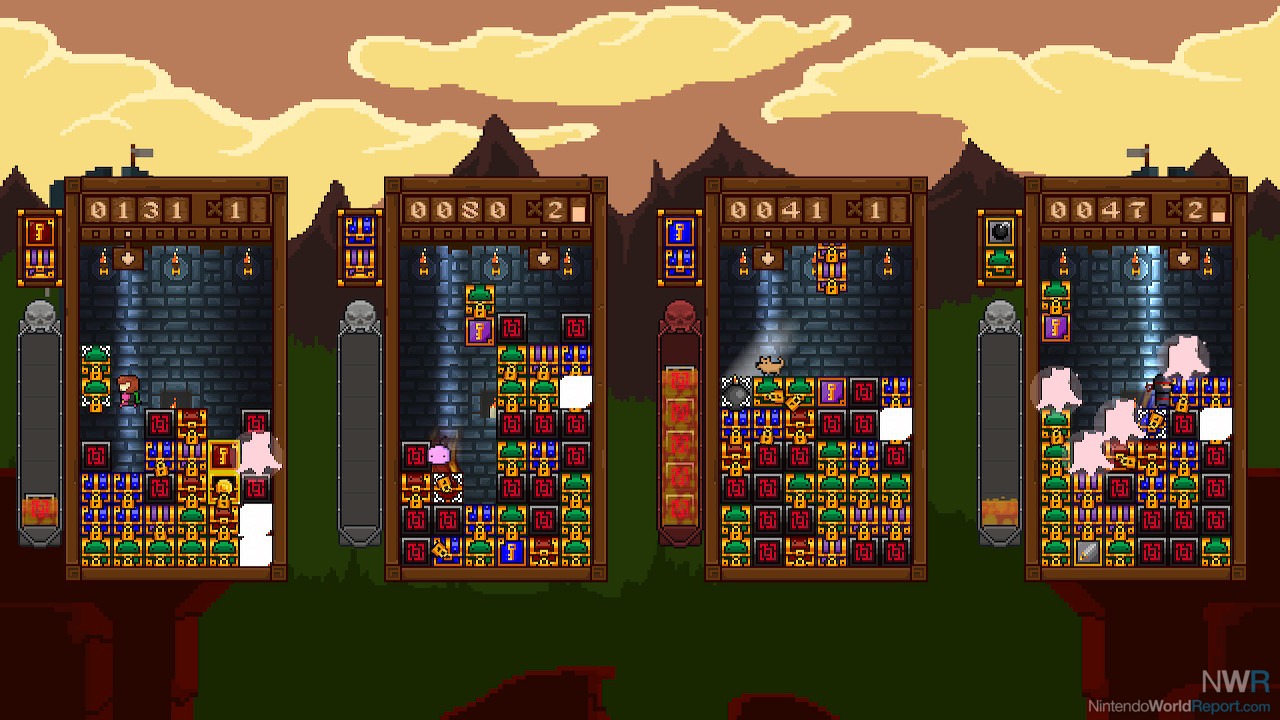 First let’s start with the good, which is primarily found in the presentation. The art style is adorable, with tons of great pixelated touches and flourishes. The soundtrack pairs well with the pleasant graphics and while I wish the ample amount of optional player characters and grapples were more than just skins, it was fun to see them as I unlocked them. Unfortunately, only your offline play goes towards unlocking new skins, so if you were to play this game and hop online right away, you’d have no method to unlock more skins.

The puzzle mechanics are an enjoyable refinement of Wario’s Woods. For the uninitiated, it’s a structured falling-block puzzler but you control a character that can jump and move around in the field of play. You also have a grappling hook that can quickly drag down falling blocks to expedite your process. The controls can get a little finicky, as exact placement of blocks depends a lot on contextual character direction that can get you tongue-tied in a tense battle. Still, after a gentle learning curve, it’s great fun to bounce around and set your stacks of treasure for combos. 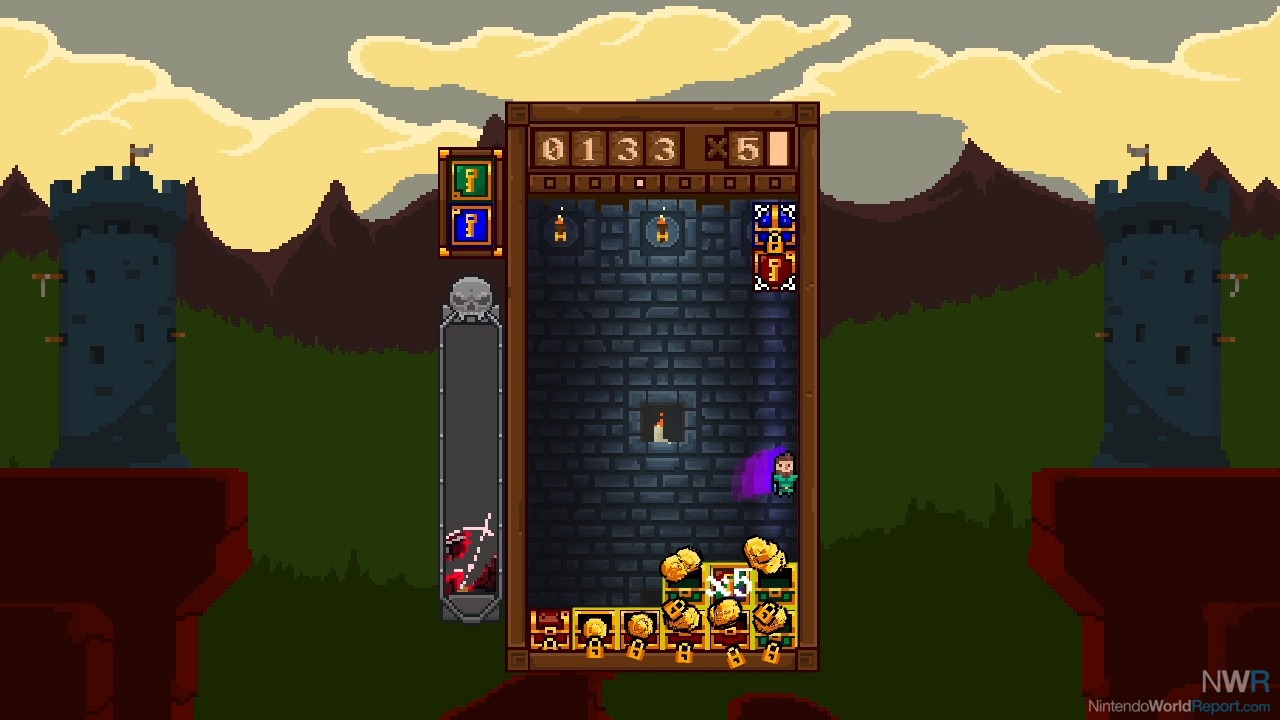 Unfortunately, you don’t really have a lot of options to play in Treasure Stack and most of them are clumsy in execution. The highlight is the 30-day season of online multiplayer. As you increase in rank, you can earn season-exclusive skins and more, but in my experience over the launch weekend, I would often sit waiting for a match for minutes. And most of the time when I would get matches, they would just be against the same player a few times in a row. Even rematches were clumsy as at the end of every match—online or local—you get taken back to the main menu. In general, it’s not an enjoyable interface.

Local multiplayer is a great time if you can get some friends together, especially in four player, as the game is frantic and fun. Minimal options and variety can make it stale over time, though. If you’re playing by yourself, you have a single, solitary way to play. It’s just an arcade mode where you play for a high score; only, there is no way to view your current high score or compare your scores. A “records” menu option exists, but it only contains online data. 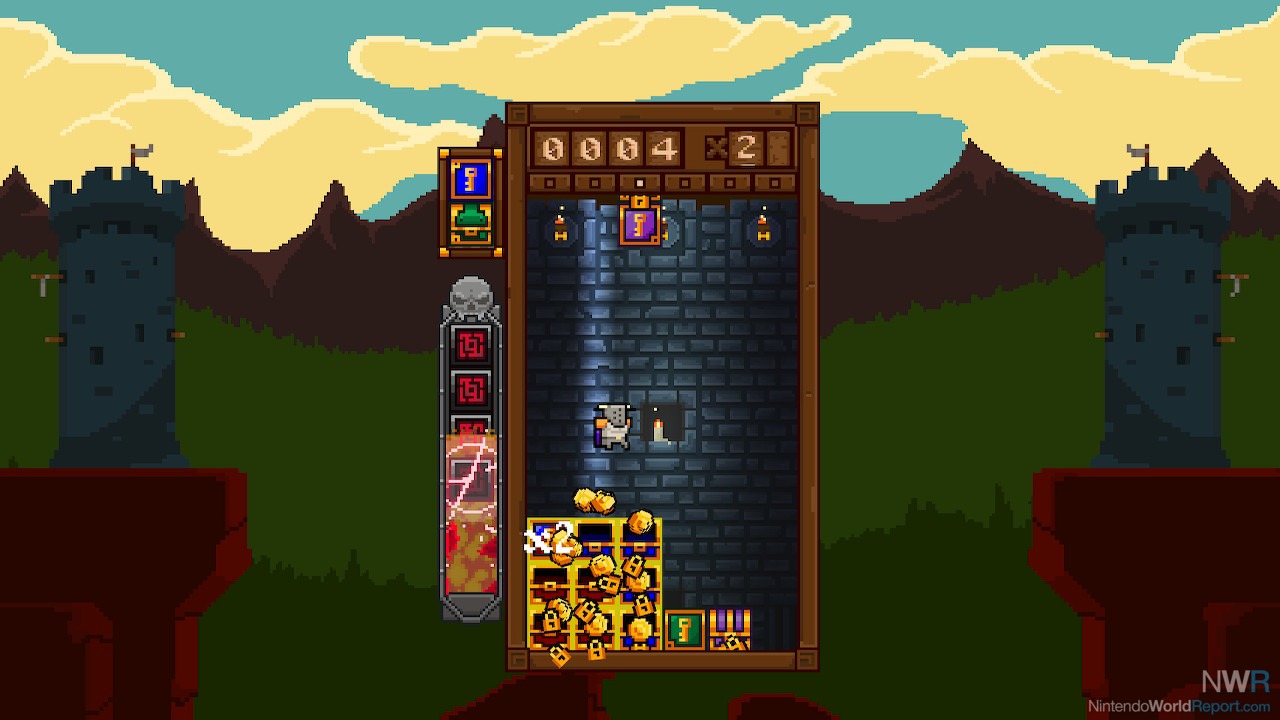 I desperately want to love Treasure Stack, but as it is right now, it’s a colorful sketch of a video game at best. Simply, there just isn’t much of anything to do and a frustrating interface and a seemingly absent online landscape (including crossplay with Xbox One and PC) makes the future for this heavily online-focused game look bleak. Maybe someday this could be a richer, fuller experience, but it isn’t right now.