A polished horizontal shooter that lives up to its name.

Devil Engine is a horizontal shoot-’em-up that’s as gorgeous as it is challenging. A worthy addition to the Switch library, it features six levels, a variety of challenges, and tons of gameplay and display options. Even on the easier difficulty settings, Devil Engine is likely to be frustrating for more casual players, but fans of the genre will find a lot to love here.

You pilot the Andraste, a ship that has three different speed settings and can use a burst ability to block most bullets. As you destroy enemies, you build up a combo meter that helps you score more points, but the meter also dictates how large of a burst you can spread out from your ship. The burst functions like a shield, and if you absorb enough fire, your combo meter won’t deplete; however, blocking single projectiles will fully deplete your meter, so there is a fun risk-reward system in play. Do you try to fly around small waves of bullets to preserve your combo multiplier, or do you play it safe and burst away minor threats? 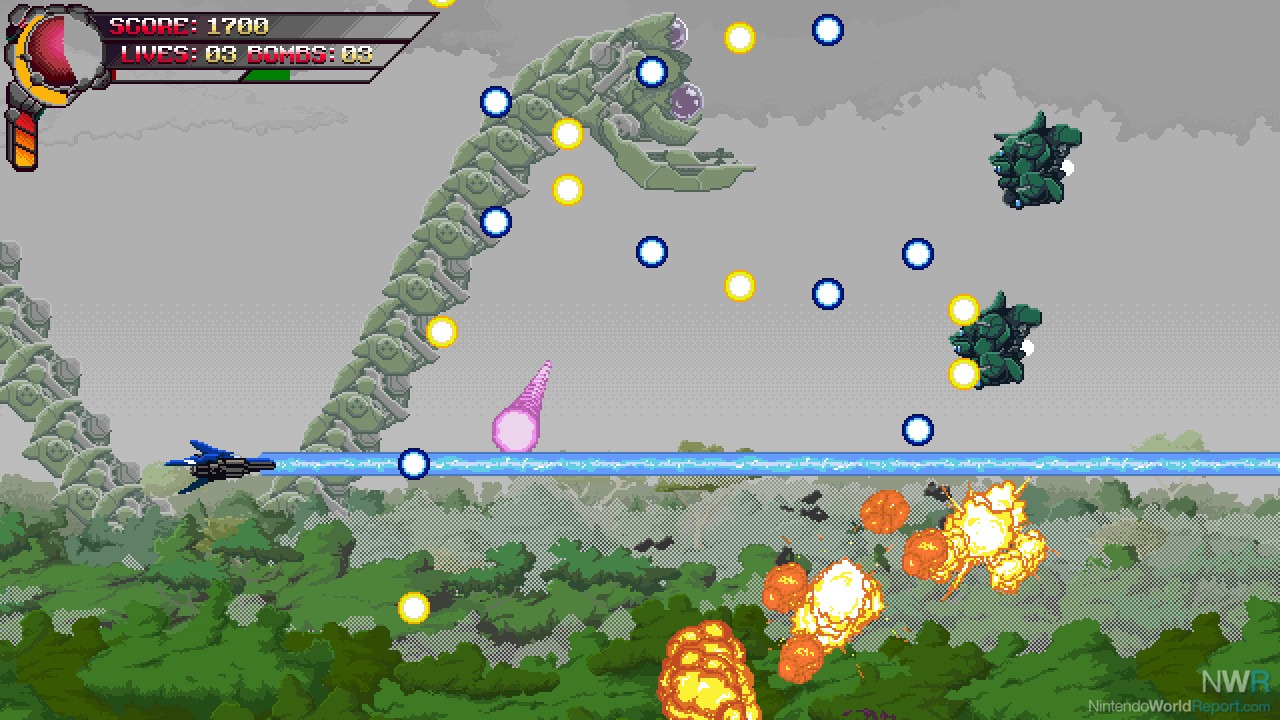 Across Devil Engine’s six stages, there are loads of different enemies to destroy and multiple bosses. Each stage has a mid-boss and a final boss, all of whom take up lots of real estate on the screen and come at you with a variety of attacks. You can equip your ship with three primary weapons that can be upgraded three times each. The laser does a lot of damage in a straight line and is great for taking out bosses; the spread shot fires multiple bullets out in waves in front of you; and the homing shot is weak but seeks out targets, allowing you to focus on flying. Each weapon also has an associated bomb attack, but these are a little underwhelming compared to their screen-clearing brethren in other shooters. Weapon power-ups are common and there is a strategy to knowing which weapon to have for the section of the stage you are in.

The visual style of Devil Engine evokes the 32-bit arcade shooters of the past, but the hand-drawn pixel art, beautiful backgrounds, and fantastic use of light and color make playing a treat for the eyes. Not to be outdone, the soundtrack features composer Hyakutarou Tsukumo, famous for his work on Thunder Force V, and the music is a great compliment to the frantic action happening on screen. My only gripe is that it can be a little hard to see if you are damaging some of the bosses with your firepower as the visual cues are subtle. 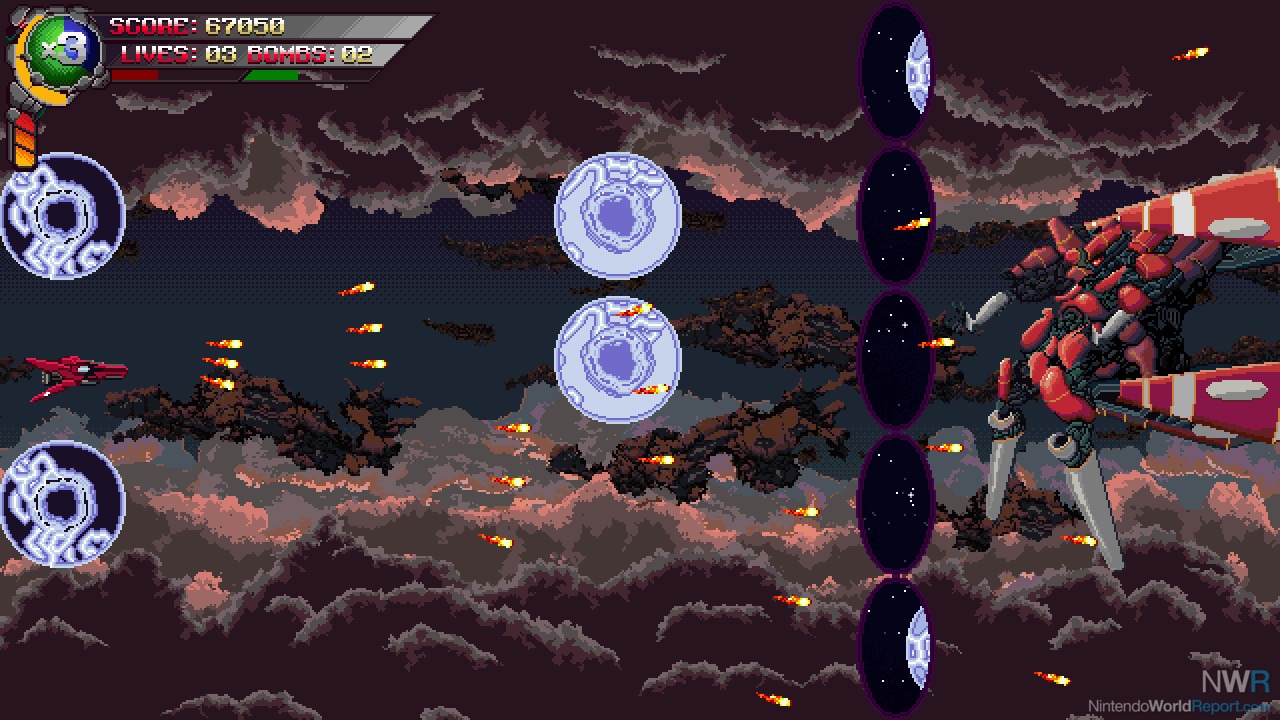 As your score increases, you earn more bomb attacks and extra lives, but the latter especially depends on keeping your combo multiplier as high as possible for as long as possible. You start with three lives and a set number of continues, but every time you play your score from that run is added to a total score for the entire game. As the total score grows, you will unlock more continues, different enemy bullet styles, unique visual filters, and tough-as-nails challenges. This roguelike element helps soothe the sting of defeat, but learning the stages and boss patterns is just as important as anything you unlock.

I really enjoyed playing Devil Engine, and it’s another great horizontal shooter that plays and looks great on Switch. It would benefit from a clearer picture of how you unlock different pieces of content and perhaps a third difficulty besides Very Hard and Very Easy (which isn’t really easy at all). The eShop listing also states that you can “(s)pend your accumulated points to unlock in-game shaders, additional music, stages and playable ships,” but for me unlocks were automatic, and I didn’t get far enough to see new ships to play as. It might be that a little too much of the game is hidden behind the higher difficulty or the need to collect an inflated number of points. That said, these are more minor concerns that put a small dent in an excellent experience. Shoot-’em-up fans need to have this game on their radar. It’s a beautiful trip through bullet hell before a date with the Devil Engine.