Two exhilarating arcade-skaters grind their way onto the Switch.

At first glance, OlliOlli looks like your typical endless runner or side-scroller – a bizarre thing to say about a game that involves no running. Just like those genres of games, you guide a character left-to-right and leap over any obstacles that come your way. In this one, though, you need to focus on exactly how you hit the ground, and try to stay in the air as long as possible through grinding, spinning, and performing manual tricks. These different responsibilities add a new layer onto the typical formula. It was hard to grasp my first time jumping in, but after getting a grip on the controls I was hooked. The desire to go faster and perform longer combos was enough to fuel my newfound addiction.

OlliOlli: Switch Stance is the latest release in the series, bringing OlliOlli and OlliOlli 2: Welcome to OlliWood together into one package. Both games share the same core gameplay mechanics, but each has its own distinct visual style and unique features.

The first OlliOlli game, which first released in 2014 on the PlayStation Vita, quite frankly looks like every other retro-inspired indie game. It still looks great with its dynamic backgrounds and constant movement, but lacks any sort of originality visually. I bring this up first because all that melted away when I started focusing on the gameplay. 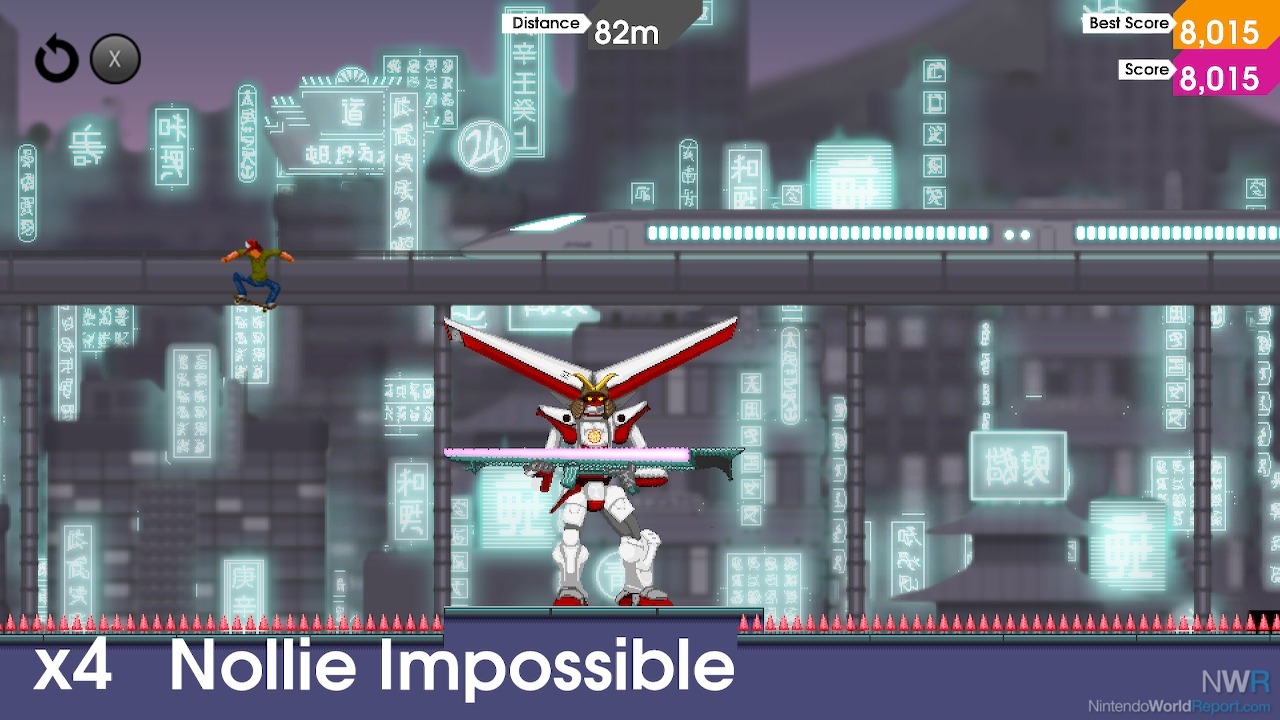 The tutorial throws a heap of techniques at you right away – I wish it gave me some time to practice skating around before forcing me to apply tricks and grinds. It took me a few minutes to adapt to the controls and grasp the most basic movement skills, because it differs so much from any other runner-like game. Rather than pressing right to move, you need to push off on the skateboard with the B button. Instead of jumping with a button, you perform tricks using the left joystick. These controls make sense for the gameplay, but are anything but traditional – so don’t lose faith in yourself right away, just practice.

Once you have the basics down, you start paying more attention to how long your combos are. To get a high score, you need to nail down your combo abilities and stay in the air by grinding on poles as much as you can. You also need to make sure to perfect your landing timing, pressing the B button at the precise moment before you hit the ground. 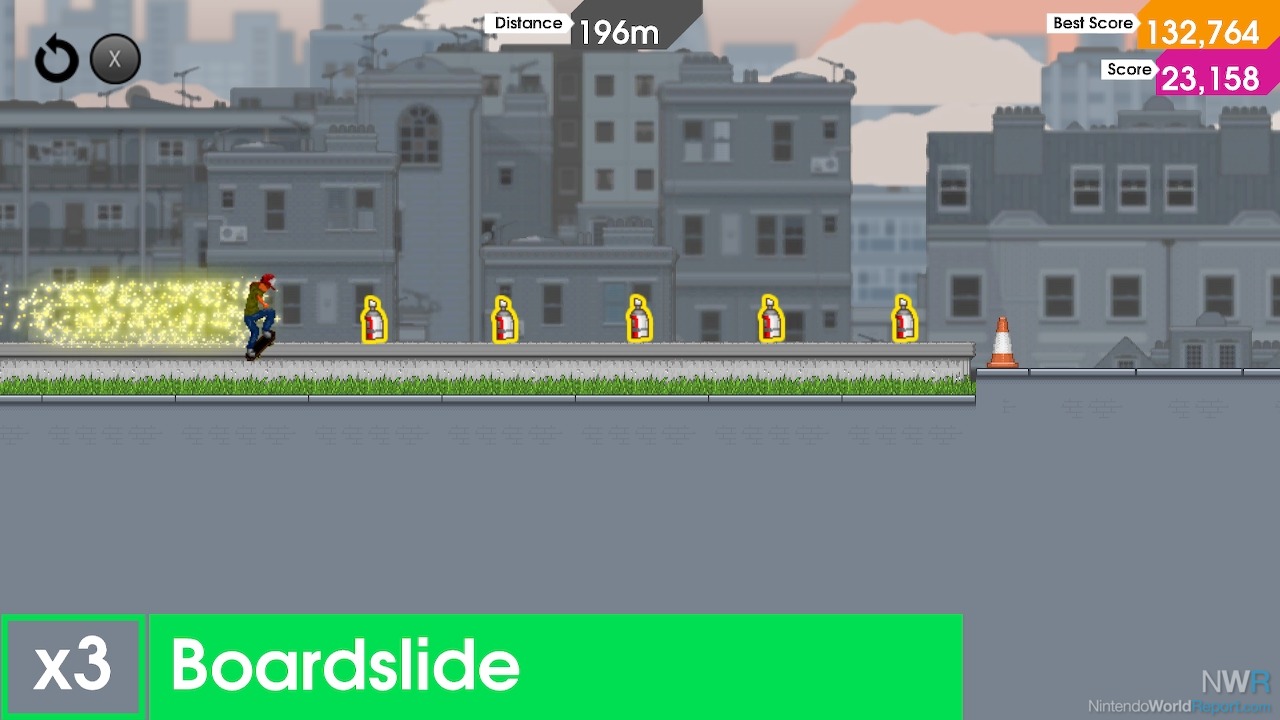 One of the rougher parts about this first game was differentiating between objects and backgrounds. I had to repeat some levels again and again just because I was falling on obstacles that I thought were just part of the scene going on behind me. This was frustrating, but not the end of the world, it just held back my progress through the levels a bit.

OlliOlli’s sequel doesn’t try to reinvent the original formula, but there are a few major differences that make this the definitive game in the series. While I still would play either of these games in a heartbeat, the sequel is more fun and refined.

The response of the controls feels slightly more accurate but mostly the same as before. The camera is more distant, which makes it easier to look ahead and plan for what to do to overcome obstacles and nail landings. 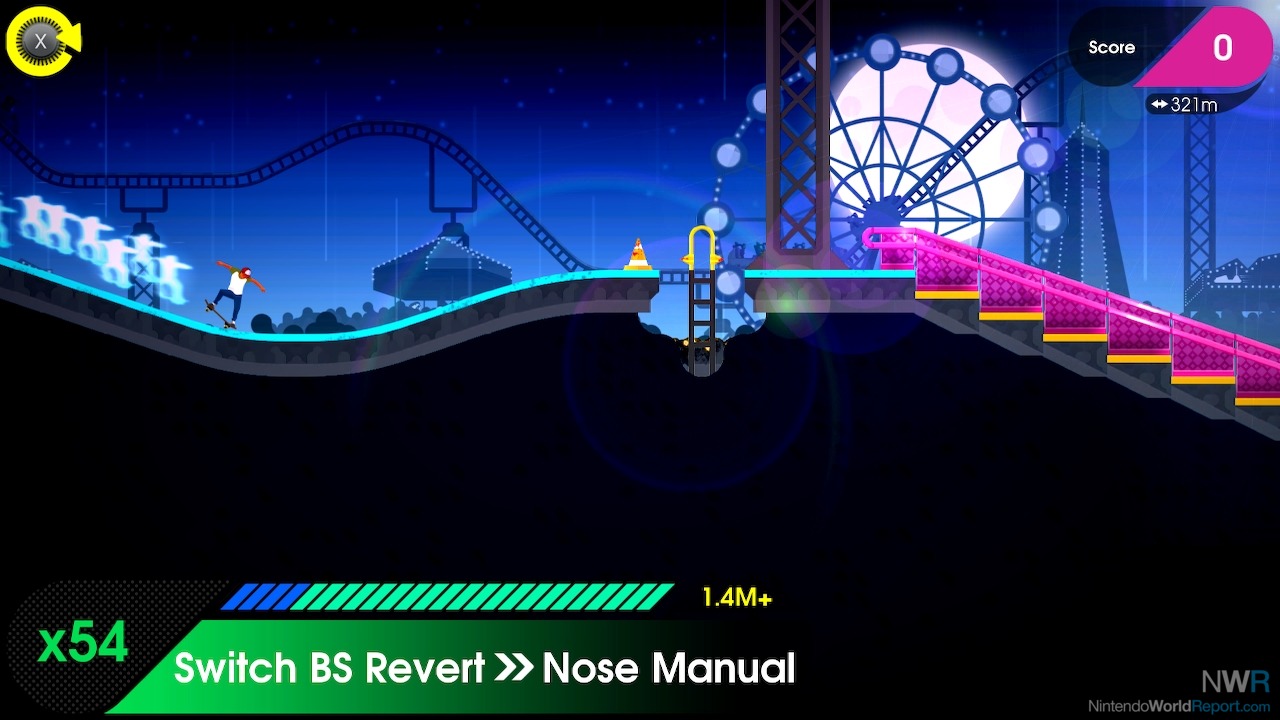 The biggest difference, above all else, is the addition of manual tricks. They’re nothing fancy – you just have to press the joystick left or right while you land. This causes you to coast on one side of your board, but more importantly, keeps your combos going without having to always grind or spin. Long combos are now way easier to pull off, so you can be more strategic about which paths you take or what tricks to execute instead of simply worrying about how high your score is.

Next, the visuals. While I definitely don’t mind the original game’s retro-inspired style, it looks quite generic, especially with the onslaught of indie games with similar graphics on the market over the last decade. Welcome to OlliWood takes a more minimalistic approach with its visuals, adopting a more cartoony look but with the same depth-of-field motion effects that made the original game feel so good.

Overall, the combination of these two games will, without a doubt, keep you occupied for a while. A learning curve can be a barrier initially, but once you learn the ropes, you’ll just want to keep skating forever. Although the second game is the better of the two, the difference isn’t stark enough to warrant skipping out on the first. These both fit the textbook definition of perfect on-the-go games – while not the most visually impressive games out there, they are perfect for both quick bursts of fun or hours of intense focus and mastery.