It has been a while since I got into a rhythm game. I was a teenager during the Dance Dance Revolution and Guitar Hero days and was not immune to their influences. That being said, since then, I’ve essentially been absent from the genre. Were something to draw me back in it would likely require low-poly graphics and a spaceship. At a glance, Aaero looks like a rail-line arcade shooter. Games like Star Fox, Sin and Punishment, or Kid Icarus Uprising quickly come to mind. There are certainly comparisons to be made to these games, but the reality of Aaero’s gameplay is something far more unique.

Aaero is separated into two different rhythm-based mechanics. The first of these is built around flight. Your ship’s movement is perfectly matched to the position of your left analogue stick. A blue beam of light weaves around the outer edge of your ship’s range. The goal is to rotate the left analogue stick to keep your ship on the line. The line’s position is laid out to sync up with the beat and tune of the music, which works better in certain situations than others but more on that later. These segments were my favorite parts of Aaero. Weaving through obstacles in time with the music was exciting and fun.

The second mechanic is based on shooting. The right analogue stick is mapped to a targeting reticle. It moves in the same way as the ship, meaning that it mirrors the analogue stick perfectly. Moving the reticle over enemies will lock onto them. Up to eight enemies can be locked onto at once, but that’s easier said than done. Unlike the the beam of light that you follow for the flight-driven segments, enemy ships tend to not stick to the edge of the analogue stick range. I suspect it's due to the tiny sticks on the joy-con, but even on a pro-controller I had incredible trouble locking onto anything that wasn’t at the edge of the screen. While it's usually not an issue, watching a lone missile slowly move towards you as you struggle to move the reticle over it is very frustrating. You can also earn extra points by shooting in rhythm with the music. I never got particularly good at this on most songs as I was more concerned with shooting down missiles before they killed me rather than being rhythmic.

As with any rhythm title, much of your enjoyment may depend on the music included. I think it says something in the game design’s favor that I enjoyed Aaero’s gameplay so much despite strongly disliking the majority of its music. Regardless, if you do gravitate towards dubstep, you’ll more easily tap into the full exhilaration of Aaero’s gameplay. But, how does the music choice affect the actual gameplay? Both the flight and shooting segments are at their best when the music features a strong melody. When the light rail closely reflects the tune of the song, movement feels natural and instinctive as opposed to being based solely on a drum loop. I found shooting on beat to be easier as well. For some reason I had an easier time identifying the beat in songs with a stronger melody, but to be fair that may come down to my inexperience with the musical genres at play.

Aaero is a beautiful game that runs great both docked and handheld. Performance always felt ultra smooth, which is a must for this type of game. The stylized low-poly environments are diverse without ever being too distracting. Only in one song did I have trouble separating obstacles from the background, and after a couple attempts things clicked. As I’ve said you’re mileage with the music will vary but it fits the visual design very well, and the whole thing feels very polished. Whether you never left the rhythm genre or are looking for a way back in, Aaero is a thrilling title that’s likely even better if you enjoy the music.

Thank-you for the review.  I somehow completely missed this game, but now I think I'm going to snag it. 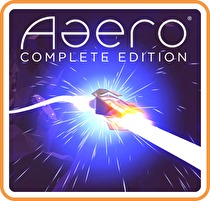