A brilliant and more accessible sequel to enjoy with a friend

It’s dawn. You’re a lone king in a hazy and mysterious land. Suddenly, a ghost appears and beckons for you to follow it. As you trod the dark and dreary wild to pursue the spirit you arrive at an abandoned campfire site. Here, the goal is presented to you: to build, expand, and most importantly - defend. Playing as a side-scrolling wave-based strategy game, Kingdom Two Crowns ditches the roguelite roots of its predecessor for a newly refined and more approachable entry in the series. What blossomed from such a carefully cultivated experience ended up being one of the best cooperative games I’ve ever played and a worthy sequel to the beautifully pixelated Kingdom franchise. 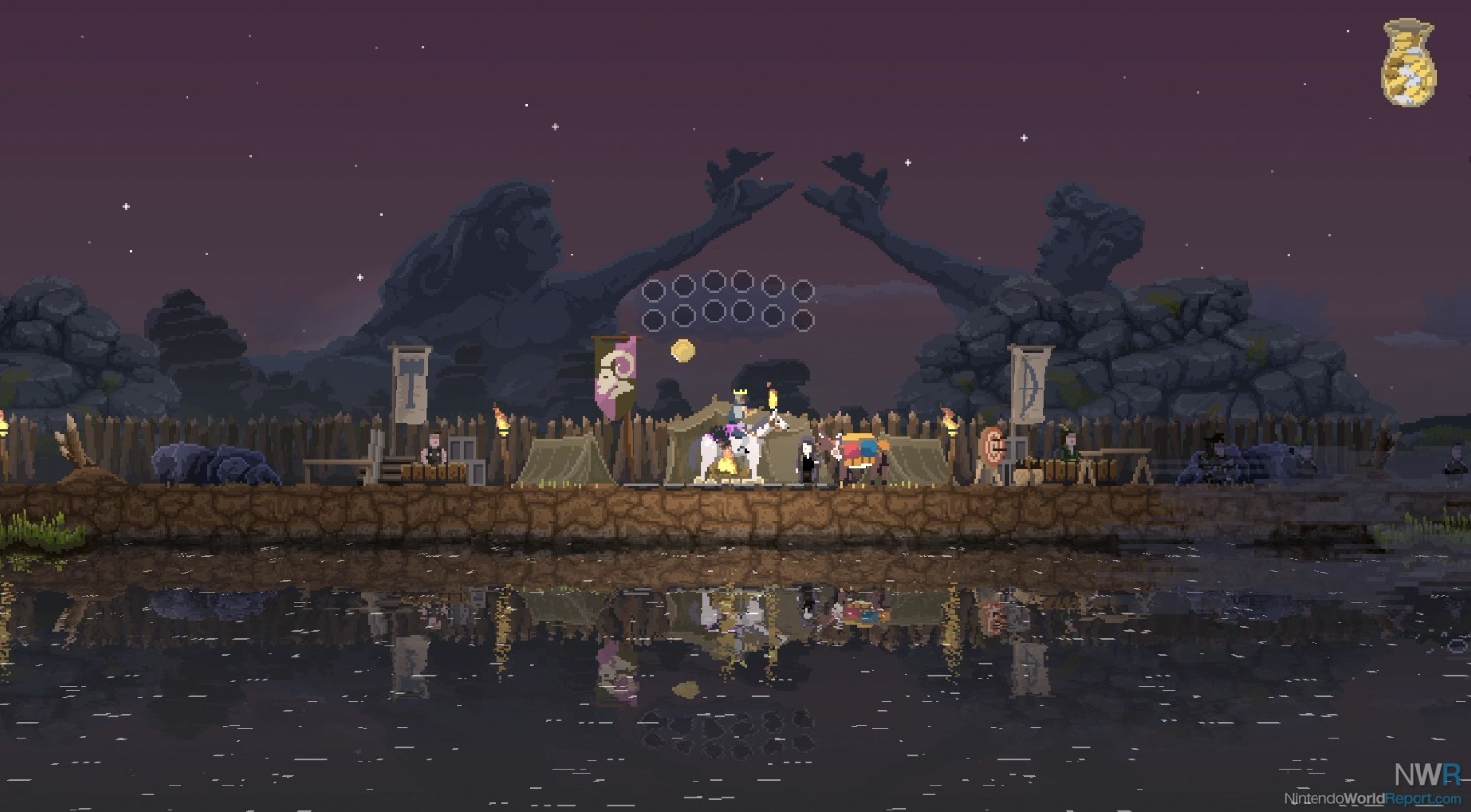 Now, dear readers, if what I just explained to you sounds up your alley I would encourage you to stop reading this review and go ahead and pick up the game. As previously mentioned, part of the magic of Kingdom is exploring, experimenting, and experiencing. Finding out on your own how things work in your beautiful, strange, and scary kingdom adds so much to the experience - and can really help cut your teeth on which strategies to use to further it. If you like that feeling in a video game where you suddenly shout out “My character can FLY?!” you will like the many surprises that lie in store.

Two Crowns does a great job of showing you the absolute very basics of how to grow your kingdom from scratch. By hiring local vagrants to become your loyal workers and assigning them certain jobs, it immediately starts you off on your journey to get wealthy. Builders build walls of defense and cut down trees to expand your dominion. Archers hunt local wildlife and bring in a great source of gold. Farmers sow the land with crops to produce gold on a consistent basis, just when you think you’re out of options. On top of that, there are a bunch of other helpful residents to add in a few more wrinkles of strategy that will get you prepared for the evil Greed that spawns at night. Incredibly, all of this is done with a simple threebutton control scheme, which makes the game playable with just one hand. 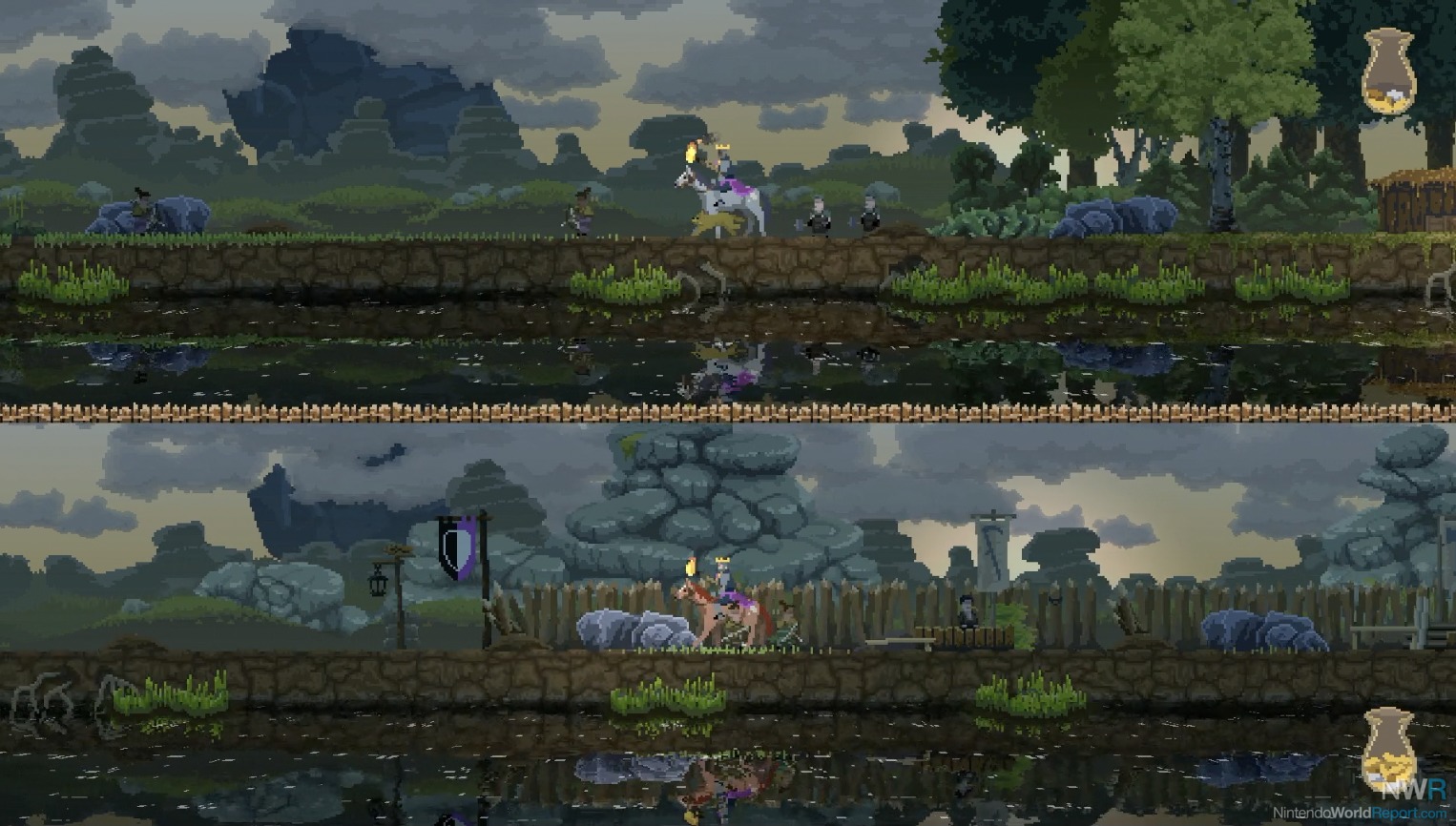 Stepping away from a roguelite setup (where if your kingdom is overthrown then it’s all over) surprisingly doesn’t change the feeling of dread and prosperity much at all. Interestingly enough, you and your crew can travel between the five islands before ever conquering even one of them. Introducing a sort of pseudo-Metroidvania element, venturing to other areas can net you an upgrade to your tech, which you can then use on previous islands to build bigger and stronger defenses. A second form of currency is also introduced in this title in the form of gems, which sit along your gold in your trusty pouch. These rare and valuable stones can grant you access to many different upgrades to your arsenal - including statues that buff various elements of your squad, little hermits that can transform existing structures into extremely helpful stations, and most importantly, mounts to ride on.

The mounts are one of the most exciting and amusing parts of Two Crowns. Each island introduces a new beast that each player can switch to and ride on (for a handsome fee). These introduce the aforementioned “Whoa!” moments, which can’t really (and shouldn’t) be described in text form. Utilizing these various mounts will be an important role in your key to success and domination, for the game can get immensely difficult and leave you feeling all alone in the wilderness with no help in sight. As Nintendo fans, we know how dangerous it is to go alone, but luckily in Two Crowns, you no longer have to. 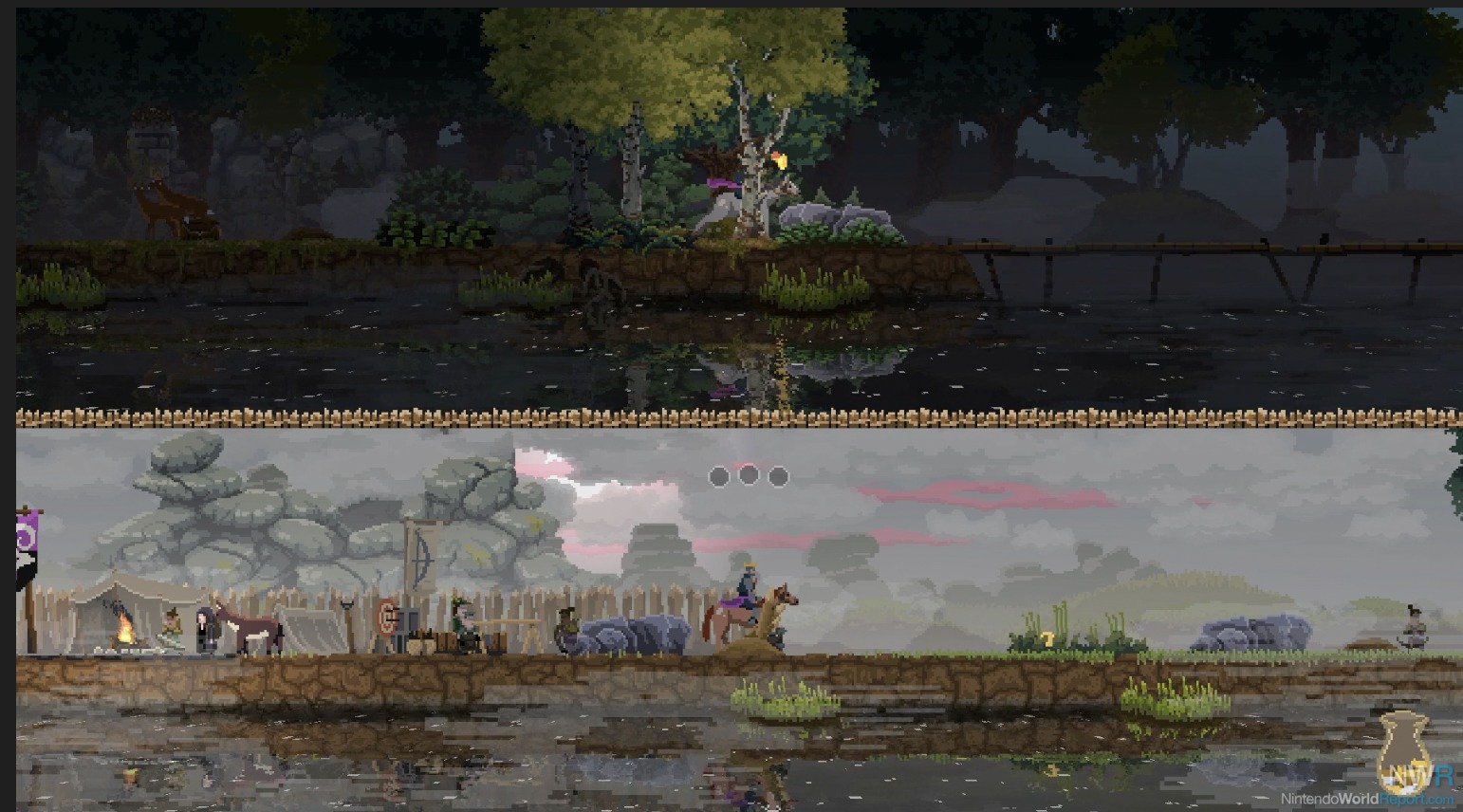 Yes, this newest entry in the series introduces the ability to play cooperatively with a partner, living up to its name. Taking advantage of this feature enables the player to literally have the options and abilities of their force doubled. Featuring a horizontal split screen, each player can roam around totally independent of each other and can help prepare and defend the nocturnal onslaught of Greed. If this sounds like a rather amazingly powerful reinforcement to your kingdom, it is because quite simply that is the truth. Because of this, essentially all of your capabilities double, with having more money to carry and being able to watch any two areas at once. Unfortunately at launch the multiplayer doesn’t support online play, but has been promised to release in a future update.

If you are going to play this game, this is absolutely the best way to go. When I saw that it was announced that this game would have this feature I couldn’t wait to dive in and play with my wife together, as we played through New Lands side by side. Surely enough, as we played through the entirety of Two Crowns we enjoyed every bit of it, with never a dull moment in sight. Most importantly, everything works how you think it should, and really is the killer hook of this entry.

If you are a fan of strategy games (or like thinking strategically but don’t like messing around with menus all day) I would heartily recommend Kingdom Two Crowns - especially if you have a partner to rule with. Again, finding someone to experience this with and talk about will greatly help your overall experience (feel free to email me at perry@nintendoworldreport.com if you’re stuck or have any questions, I’ll be glad to share any knowledge that I have!). Even though the experience is strictly two-dimensional, has no menus, and essentially no on-screen text, the deep level of strategy that cooks underneath is nothing short of mesmerizing. While at times the difficulty can seem very intense, and all seems lost, Kingdom Two Crowns is designed so you can rebuild your empire after the toughest of invasions or the coldest of winters - and all achieved by the simplest of decrees: to build, expand, and defend.