An emotional and picturesque masterpiece.

GRIS conjures up feelings of sadness, nostalgia, excitement, and awe all in a moment. It tells the story of Gris, a girl who goes on a journey in search of her lost voice, but something else as well. I would be doing the game a disservice to reveal too much of the story here, but it is impactful and likely to be interpreted in myriad ways. Although this narrative platformer contains light puzzles and exploration, the gameplay is merely a means to an end. The experience of moving through the game, seeing the beautiful watercolor art, and listening to the haunting music combine to make GRIS so thoroughly engaging and unforgettable.

You begin in a colorless world with a halting gait and no abilities. You can only move forward; there is nothing behind. Shortly after, your pace picks up and you gain the ability to jump, which foreshadows the gradual development of Gris as she travels through loosely-connected landscapes. The first major ability you gain allows you to transform your cloak into a square-shaped rock, which severely limits your movement but can be used to smash through cracked floors and solve puzzles. The next gives you a second jump that allows you to float down, but again, the new gameplay mechanics have hidden thematic meaning: As Gris becomes empowered with these abilities, she is also working to cope with and overcome profound loss in her life.

After navigating each area in the game, you unlock a new color palette that returns to the world, and the initial black, white, and gray turn to red, green, blue, and yellow. The way in which the world transforms as you play—both structurally and visually—is breathtaking. One minute you are at the top of a whimsical windmill-like tower, the next you are falling through red and pink skies, only to crash into a forest filled with every shade of green. The use of color is emblematic of the different mental and emotional struggles that Gris is grappling with, and each environment is unique both in terms of appearance and how you traverse it.

The music of GRIS is evocative and sublime and fits each area perfectly. Like Breath of the Wild, the subtle piano and orchestral notes enhance the pleasure of exploring the world. During more threatening situations with imposing creatures like a shadowy black bird, the music is charged with tension and energy. Barcelona-based band Berlinist deserves full marks for creating such a thoughtful and powerful soundtrack. 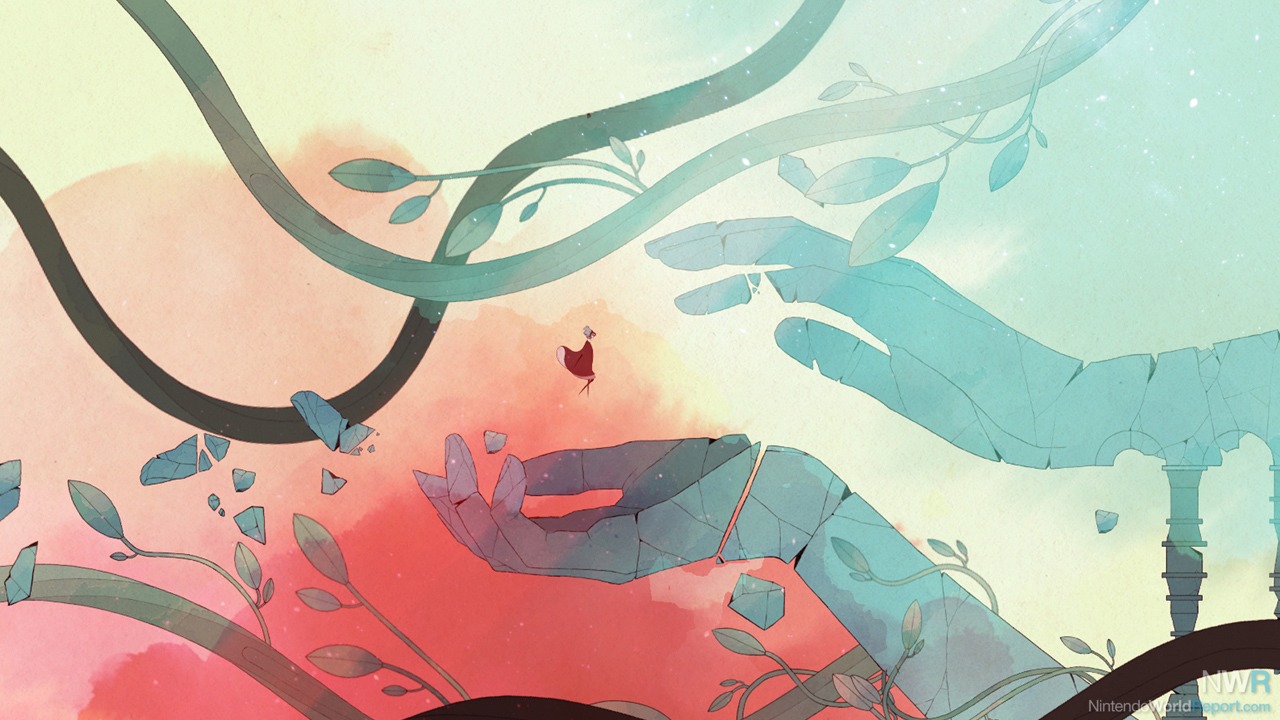 The presentation of GRIS cannot be overstated. The game frequently plays with the camera by zooming in and out, conjuring up feelings of claustrophobia in underground tunnels and making your character appear miniature in outdoor areas. Light and dark elements are juxtaposed to create vivid structures and backdrops, and they constantly allude to the skies and stars that play a major role in the game. Specifically, one of the primary and recurring objectives in each area is to find small stars that will trail behind you and can be used to create bridges. Quite wonderfully, a little twinkling sound is made when Gris walks across these bridges. Small but noticeable details like this make playing GRIS such an engrossing experience.

Completing the game opens up a Chapters option that allows you to replay the different sections of its six worlds. There are also 17 achievements called Challenges to incentivize players to explore each area more thoroughly. Many of these are well hidden or require more thinking to uncover. It’s entirely possible that you will only unlock a handful of achievements your first time through the game, which takes about 3-4 hours. Immediately after seeing the credits, with tears in my eyes, I started the game over again from the beginning; I never do this. I didn’t want to wake up from this dream. 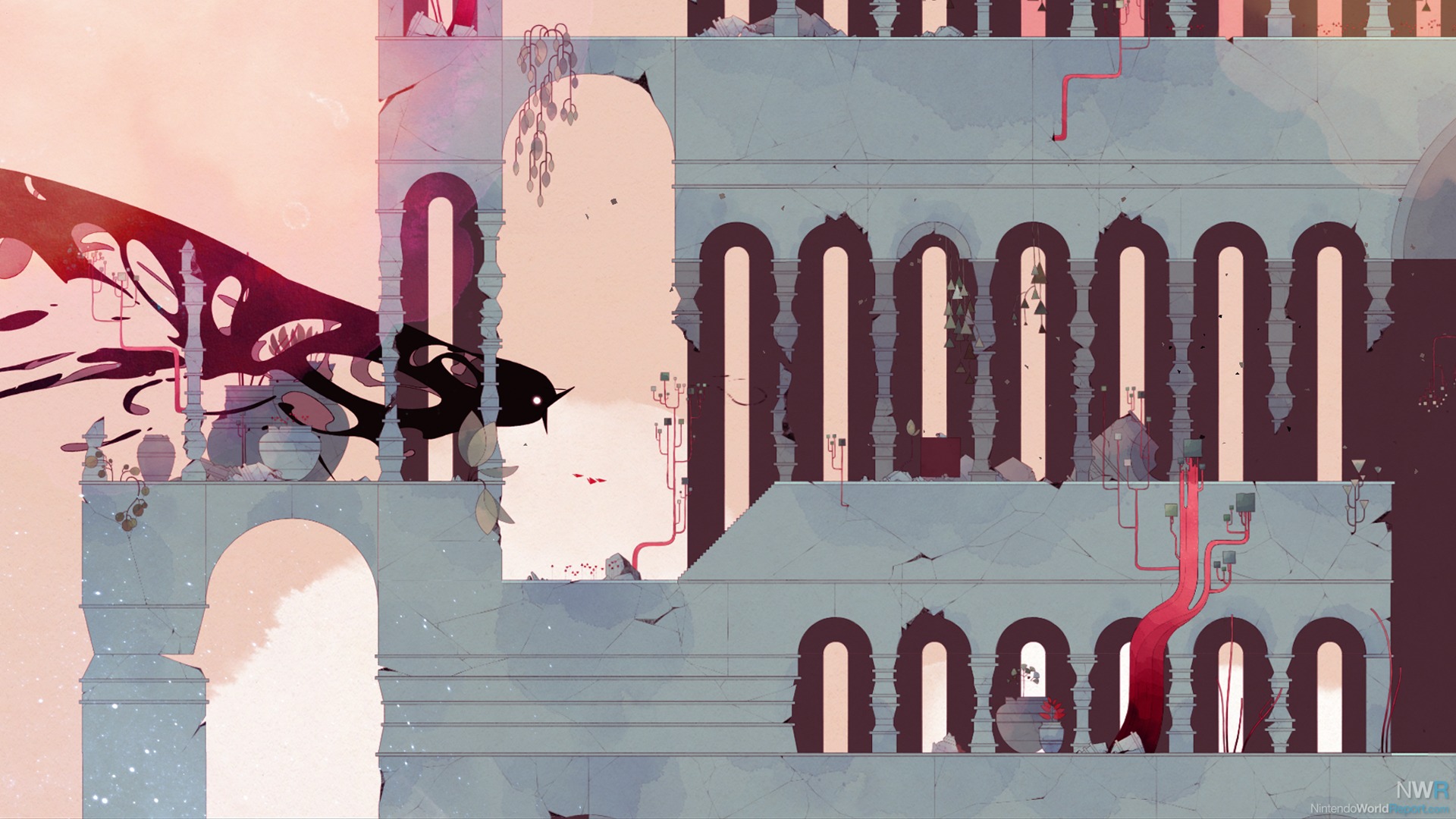 The combination of imagery, art, music, and storytelling make GRIS understated but exquisite. Playing it is not to find challenging platforming, larger-than-life bosses, or tricky and intricate puzzles. Instead, you may find that the journey and trials of Gris are not unlike ones we have all struggled through at various points in our lives. Grief and loss are not rare or uncommon; we experience these feelings all the time, and we yearn for easier and better ways to cope with them. GRIS exists not only to provide joy and entertainment, but also to suggest that recovery, normalcy, and happiness are possible if we can keep moving forward. This suitable linear game sheds light on the fact that you can’t dwell on the tragic and the traumatic if you want to escape them. GRIS is a powerful and exceedingly worthwhile title that deserves to be played by everyone in total immersion. Set aside a few hours, turn off the lights, put on your headphones. And then lose yourself in this world.

Very convincing review. I'd never heard of this, but it's on my list for sure now.

These screenshots are visually striking and beautiful, i'm with Steefosaurus, I'll have my eye on this game to get sometime soon.

Im much more interested in playing this after watching the review

Thanks for checking out the review! GRIS is a must-own title on the Switch, and it's perfect for the cool winter nights ahead.