This game. This game right here.

I like being surprised by games I know nothing about, and this is one of those times. If you watch a few videos, Horizon Chase Turbo looks for all the world like a souped-up adaptation of perennial NWR favorite OutRun, which is already a point in its favor. However, OutRun imitations can go very wrong, as I learned earlier this year with 3DS miscalculation ‘80s Overdrive. While that game tried to take the OutRun formula and add some wrinkles, almost all of those wrinkles were poorly implemented and wound up being frustrating. Aquiris Game Studio, developer of Horizon Chase Turbo, seems to have learned all the right lessons, and their game is an absolute pleasure to play.

The core experience is World Tour mode, which is essentially the campaign. You tackle three sets of two or three tracks each (plus one bonus track) in several countries around the globe. As long as you place in fifth or better, you unlock the next track in that city. You earn points by placing well, collecting the blue coins strewn around each track, and having fuel on reserve. Get all the coins and place first and you’ll earn the maximum points allowable for that track and win a “Super Trophy.” Points funnel into unlocking new cars, countries, and game modes. An insane number of tracks are available to play. I didn’t think the game had a dedicated multiplayer mode but nope, it’s in there, as up to four players can (locally) participate in every game mode. 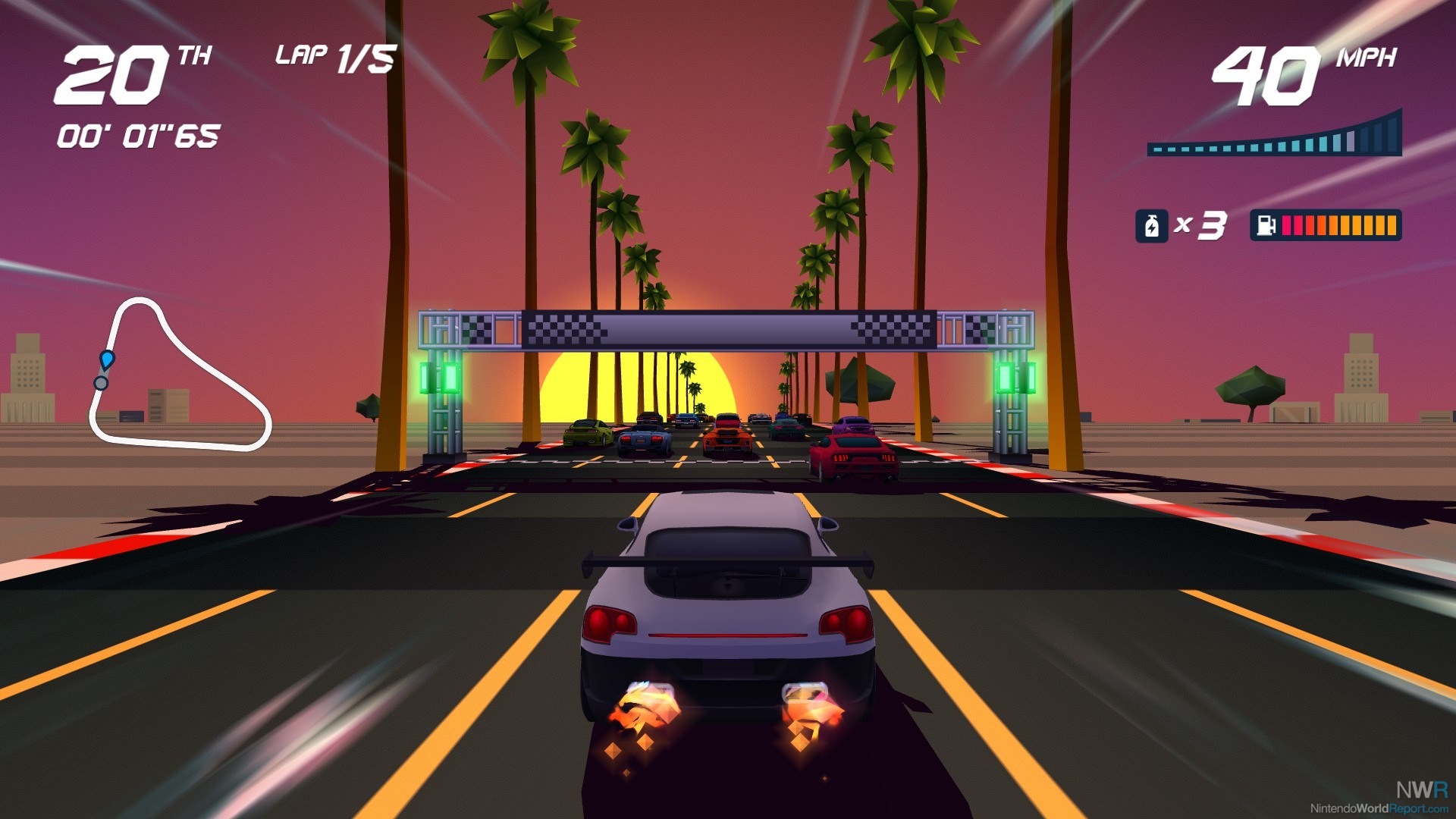 Racing is very OutRun-esque in that the horizon is largely flat and the track’s edges are lined with distinct objects, including arrows denoting a turn. However, don’t let that description fool you-- this is a stunningly gorgeous game, with bright colors, cool weather effects, and clean car models. It looks great in Handheld Mode (I never detected a frame drop) but really pops on your TV. The gameplay threads the needle between simplistic and strategic; once you get some upgrades to your garage, it’s not uncommon to be able to take 90-degree turns at full speed. However, your opponents, 19 in total, tend to be surprisingly aggressive, blocking your attempts to overtake them or trying to ram you off the road. Early in every race, your priority will be to break away from the pack, then focus on topping the next four or five guys.

The cars are generic but look a lot like what they’re obviously supposed to be, and each country has a bonus unlockable car for getting first place in every race. Cars differ in terms of stats, of course: top speed, acceleration, handling, fuel efficiency, Nitro time, etc. One of the early cars looks an awful lot like Dom’s Charger from The Fast & The Furious, which made me smile. More than 30 cars are available to unlock, too, so you’ll never be short on rides. Each country also has an “Upgrade Race” where getting in third place or higher offers you one of three upgrades to your entire garage, and it seems like the offered upgrades balance out in terms of stats--you just don’t have an opportunity to improve nothing but handling or acceleration; it’s a good mix throughout.

You’ll race in locales as diverse as Santorini, Rykjavik, Abu Dhabi, California, and even Easter Island, among many others. I can’t begin to describe how fantastic all these localities look. They look a little cartoonish, sure, but the abstraction doesn’t take away from their splendor. 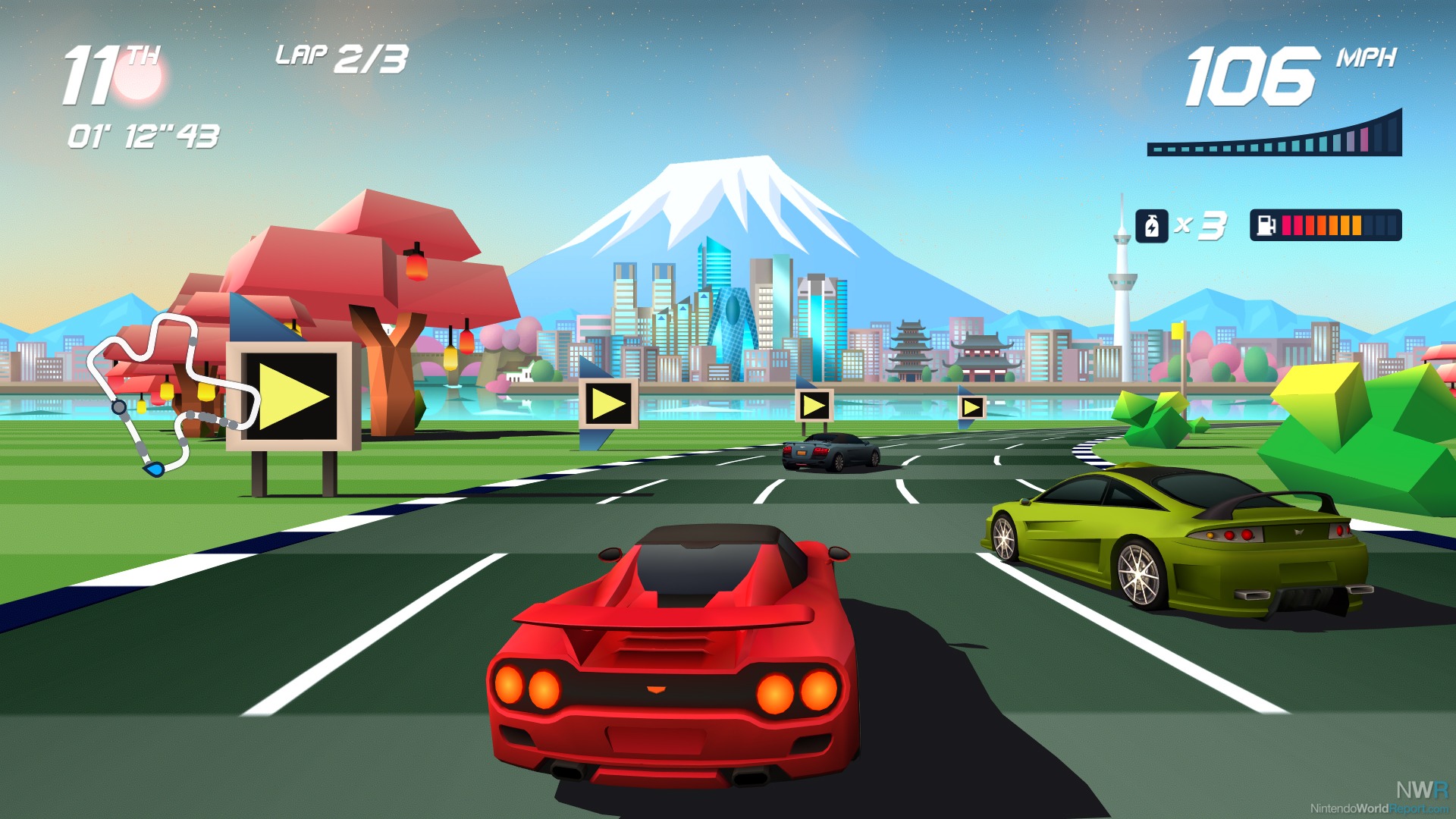 In addition to just surviving, Horizon Chase Turbo asks you to find blue coins (totally optional) spread across each track, usually between 10 and 20, and often in convenient chunks. Sometimes they’re easy to grab, and other times they force you to hug the outside of a sharp turn and risk wrecking your ride. Also, you’ll have to watch your gas tank and stock up on gas cans that are located on most of the tracks. You CAN run out of fuel, so keep an eye on that. I can see this being a point of division among players but I liked it--fuel is rarely out of reach and it helps to make a mental map of the course.

Races tend to be fast and furious--topping out just above two minutes most of the time--and what they lack in length they make up for with eye-twitching turns. The turns are where a lot of your passing opportunities occur, though it’s also where aggressive drivers can ruin your day on narrow roads. You cannot damage your car despite being rammed, bumped, and even overturned. All you do when that happens is lose time and probably some positioning. If you do get stuck in a jam, you can always hit your Nitro. You have three by default but can pick up extras on each track. Nitro boosts are exactly what it says on the package, and you’d better be at the head of a gentle curve or a straightaway before you deploy them.

I can’t tell if the game has rubber-banding or if the top three or four racers really are just way too fast, but it usually took me way too long to overtake the top two guys and cross the finish line with any real time to spare. It can get annoying but races are so short that it’s rarely a hassle to try again and maybe even nab that Super Trophy. 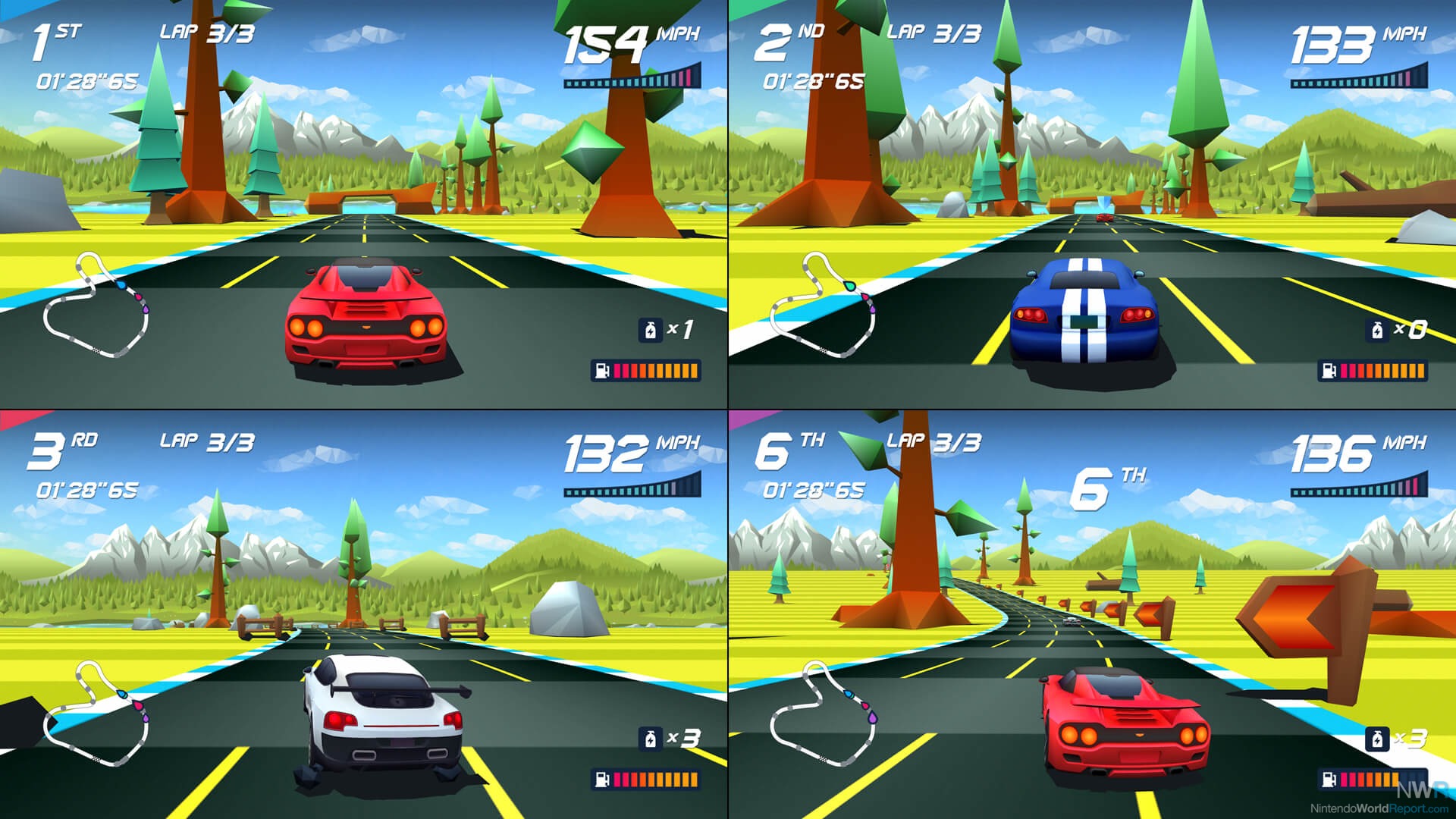 There are additional game modes: Tournament tasks you with winning a four-track gauntlet and there are three levels of difficulty. Endurance, which is only unlocked after beating World Tour mode, is essentially a mega-tournament and you can (mercifully) take breaks from. The final mode is Playground, which offers unique spins on existing tracks--adding weather conditions, mirrored tracks, extra Nitro, or a restricted selection of vehicles (“No HUD” is surprisingly stressful). And, again, you can take on these game modes with up to three (local) friends. It’s fantastic.

One more thing I’d like to highlight: the music. Barry Leitch writes some killer car racing tunes, with lots of electric guitar and pulse-pounding rhythms that pretty much psych you up for the duration of every race. The soundtrack is wonderful; you should turn the volume up.

I’m not usually one for racing games, but Horizon Chase Turbo balances arcade gameplay with just enough strategery to keep me involved and at the edge of my seat most of the time. Very often, upon eeking out a first-place victory on a difficult course, I would cheer and hold my fist aloft, confusing our dog. This is not something I usually do with racing games. I kind of wish online multiplayer was in here (it does have persistent global and friend leaderboards), but it’s a small price to pay for this lovely package. Horizon Chase Turbo was a very pleasant surprise--go play it.

Jeez, this looks kinda fun! I may pick it up.