Your mileage may vary.

When I look back on the 3DS years from now after they’ve stopped producing systems and the collector’s market starts to pick up, I will fondly recall the SEGA 3D Classics games which introduced me to a library of games that I had rarely or never experienced. There’s a subset of SEGA 3D Classics that are adaptations of seated arcade cabinets: After Burner II, Galaxy Force II, Out Run, Space Harrier, Super Hang-On and Thunder Blade. Of that group, Out Run remains a perennial favorite. Most of these games, Out Run included, make use of a unique graphical effect that simulated speed and forward movement. An easy comparison is to Mode 7 but it’s not really the same. Anyway, it’s a cool effect that went the way of the (non-avian) dinosaur once those arcade cabinets faded into memory.

So you might imagine my excitement when I heard about 80’s Overdrive, a spiritual successor to Out Run by Insane Code that came out at the tail end of 2017. Finally, a racing game even I could enjoy. Well, uh, remember how insanely hyped I was for Metroid: Other M and then I actually played it and felt the painful sting of betrayal? While my feelings towards 80’s Overdrive were not quite as strong, I was similarly disappointed with the outcome of this Out Run homage. 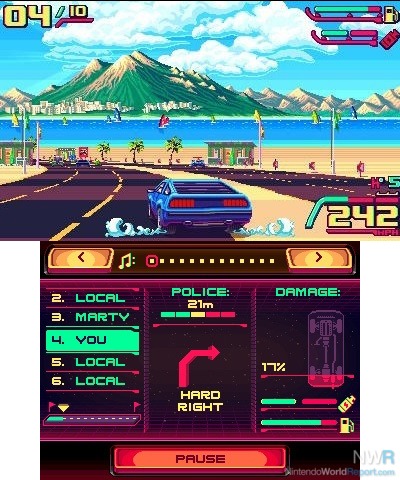 Oh, things start off very promising. This is Out Run with a goal: rise up the ranks by entering increasingly-challenging races featuring a variety of terrains, road styles, and distances. Each race has a small entry fee but the winnings far exceed it. Once you win a race and the cash prize, you can translate that cash into upgrades for your current vehicle. If you’re feeling spendy, you can fork out the cash for a brand new car that is hypothetically better from the get-go and will put your current car to shame.

The game looks incredible, kind of an Out Run meets Miami Vice in terms of aesthetic. You’ll drive through cities, deserts, forests, and along the coast. New to the Out Run formula are hills, which actually look really cool while you’re on them. The cars control well and I never really had to worry about oversteering. For the most part, small corrections will keep you going. The music is wonderful. The core racing component of 80’s Overdrive is solid. Some races contain bonus missions that will net you more cash, like coming in 3rd or damaging this specific rival’s car or collecting items strewn along the road. These missions are generally fun and there’s never a penalty for not completing them.

BUT…and you knew there would be a “but,” the game layers on additional complications that sully the experience.

First, your car takes damage now every time another car bumps into you or vice versa. As damage adds up, your car’s performance starts to nosedive. Second, you now have a tank of gas that slowly depletes over several races. Both of these things can be remedied by spending money between races. At a certain point, you’re spending most of your money on this sort of routine maintenance and you have less and less for upgrades, much less new cars. 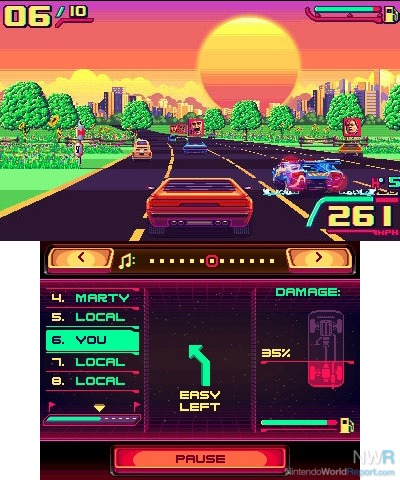 In fact, it’s never really clear when you should buy a new car rather than continue pumping money into maintenance and upgrades to your current car. Upgrades are expensive, but so is fueling up and body work. I felt like I was being encouraged to save my money for better stuff while simultaneously being penalized for attempting to keep my car from exploding or running out of gas in the middle of a race. “Look at this shiny new car!” the game says. “But you can’t buy it because you took a hit in that last race, bucko.” Not cool, 80’s Overdrive.

The races themselves are fine as long as you’re willing to put up with a few things. First, if you crash, you may as well restart the race because you’re never going to catch up to the other drivers. It just isn’t possible. Thankfully, you can restart races with no penalty except your time. Since most races are just a few minutes long, it’s not a big issue. The police, however, present a larger problem. Many tracks will have police cars that, once you pass them by, will attempt to ram you off the road and you have to outmaneuver them for a certain amount of time before they give up. Police encounters are never fun and always a pain: they slow down the action and don’t let you concentrate on winning the race, which is the whole point. On narrow roads, outmaneuvering is risky and frustrating.

You can buy two upgrades for your car that should, in theory, make these problems less severe. First, you can buy nitrous, like in The Fast & The Furious,. Activating it (twice per race at top speed) essentially gives you the Super Mario Kart version of a Super Mushroom, but the effect is so short that you won’t make up any significant distance between yourself and the next few racers. The second upgrade is a Police Scanner, which doesn’t really do anything. It tells you, on the bottom screen (which you’re not looking at anyway) when you’re approaching a police car, but it does nothing to help you during the ensuring scuffle.

Eventually I learned that, if I wanted to stay competitive, I’d have to essentially grind for money by repeatedly entering (and winning) races I’d previously completed. Because the game looks so nice, I didn’t mind too much, and since the pre-race info screen tells you the course difficulty, length, and whether The Man is patrolling, I could pick and choose my races.

80’s Overdrive is a very pretty game with really good core mechanics and some really questionable and frankly unnecessary complications layered on top. The take home here is that I really liked it until I didn’t anymore. I still pop in from time to time, but this is not a game I’m particularly compelled to play long-term.