Who knew having two jobs could be this fun.

If you’re looking for a rogue-lite on the eShop, you won’t be hard pressed to find a slew of quality offerings. However, if you’re looking for a shake up to the traditional dungeon-crawling formula, Moonlighter has you covered. Sure, exploring dungeons, slaying monsters, and gathering materials are a driving force, but during “downtime” you’ll be tending to the shop as you sell your newly-acquired wears. Dungeon-crawling and shop management go hand-in-hand as you aim not only to upgrade gear, but your shop and the town as well. The continuous loop of collecting items, selling them for profit, and then upgrading your store is a rewarding one, and it kept me diving back into the dungeons just one more time. 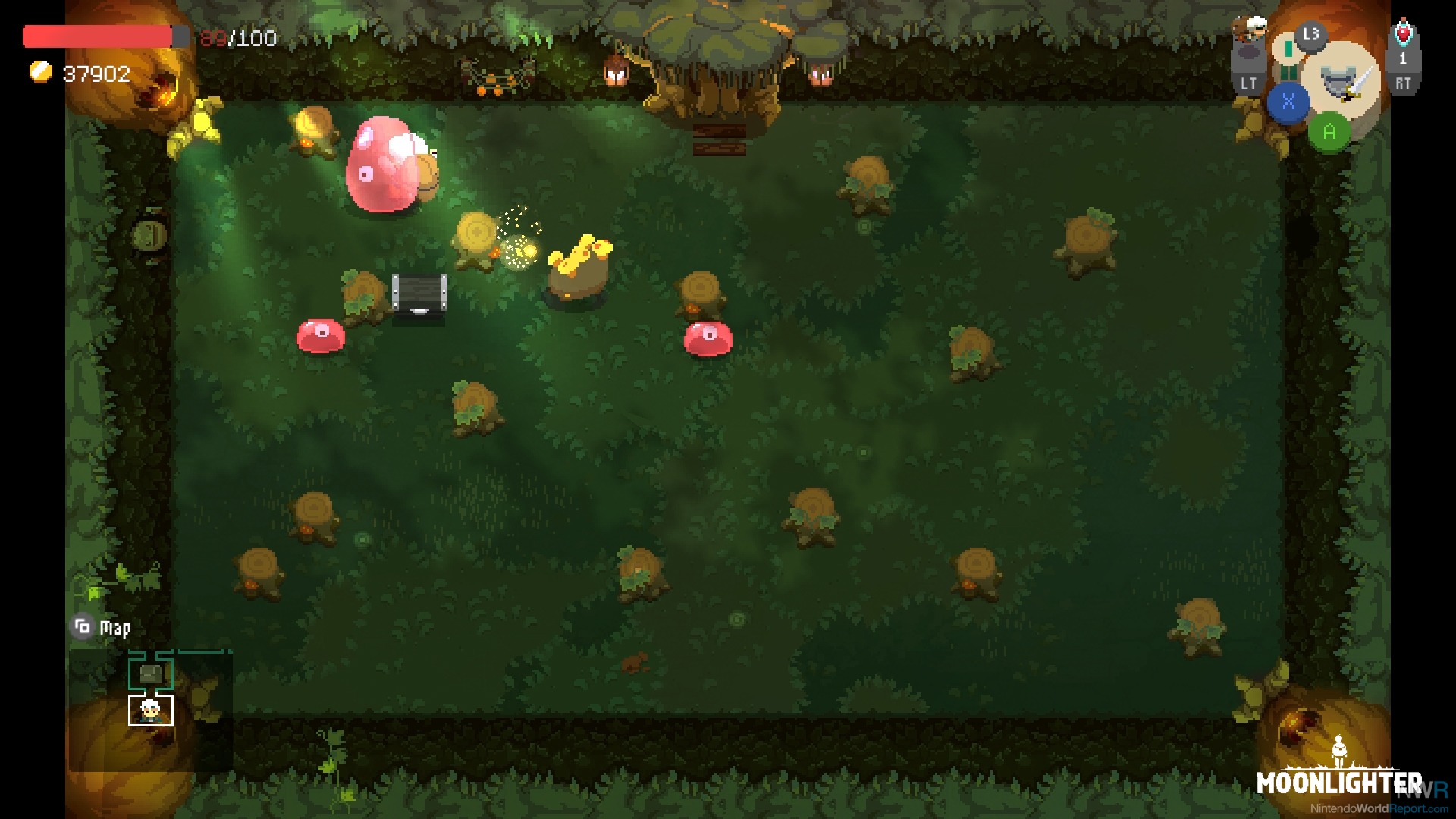 The protagonist of Moonlighter is a young man named Will, who is a merchant with the desire to become a hero. While his days are tied up running the store, his nights are filled with dangerous expeditions into the local dungeons. Waiting within each dungeon is a boss who holds a key, and retrieving the four keys to unlock the final area is the ultimate goal. However traversing through each dungeon’s three floors to get to the boss proves to be a tricky feat.

Dungeons are procedurally-generated, so each visit is different from the last. Much like The Binding of Isaac, you’ll enter a room and have to clear out the enemies before moving onto the next as you look for the exit to the next floor. You’ll have the option to pay a fee and warp out of the dungeon if you find yourself in a pinch or have become overburdened with items. For a higher fee, you can open a portal to return back to that exact spot, which comes in handy the deeper you get. If death happens to befall you, the option to either start back at the first floor or exit the dungeon completely is presented, but it comes at the expense of losing most of what you’ve picked up along the way. 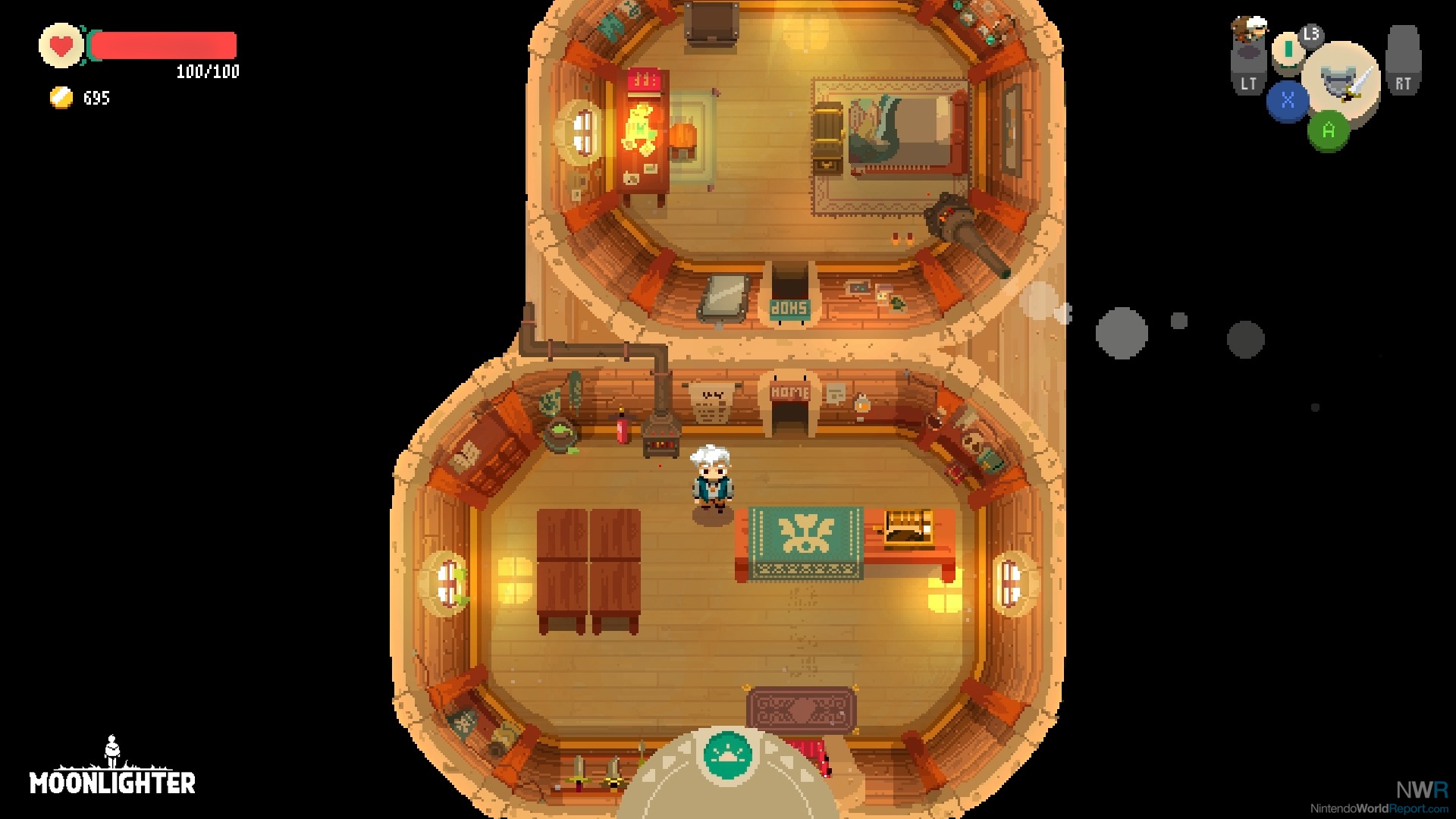 When it comes to the combat, it’s downright simple, but not in a bad way. You have three tools in your arsenal: a standard attack, a special attack, and a dodgeroll. The standard attack when used three times in a row rattles off a combo, with the last hit doing noticeably more damage. Where the variety in the combat comes is the five different weapon types, which include a few melee options as well as a bow for long distance attacks. You can have two weapons equipped at a time and with the press of a button switch on the fly. It is fun to test out the different weapons, but I always found myself reverting back to the bow due to its range. With the number of ways to attack being limited, much has to do with learning the best way to approach different enemy types. I found myself struggling early with certain enemies, but after learning the proper timing I was able to overcome them. There will be the occasional room that’s downright brutal and bosses are quite challenging, but I felt the difficulty to be tough but fair.

As you progress through the dungeons, you’ll quickly accrue a backpack full of materials. These materials are useful for crafting and for selling to make that sweet, sweet gold. When returning back to town, you’ll drop into the shop and place what you picked up on your travels for sale. Where the fun kicks in is setting the prices and paying attention to customers’ emoticon reactions to those prices. If they look disgusted, you know you set the price too high, but if their eyes light up gold, you’re missing out on some serious profits. The trick is to find the reaction of a pleased face, knowing it’s fairly priced for both you and the patron. Of course, this can be tricky when a few customers are shopping at once or if you happen to look away while the reactions pop up, but fortunately a log is kept that you can reference when pricing. However, the downside is having to constantly open your menu and cycle through somewhat lengthy lists. In addition to monitoring the reactions, you’ll have to keep an eye out for thieves who are out to steal your hard-earned items. 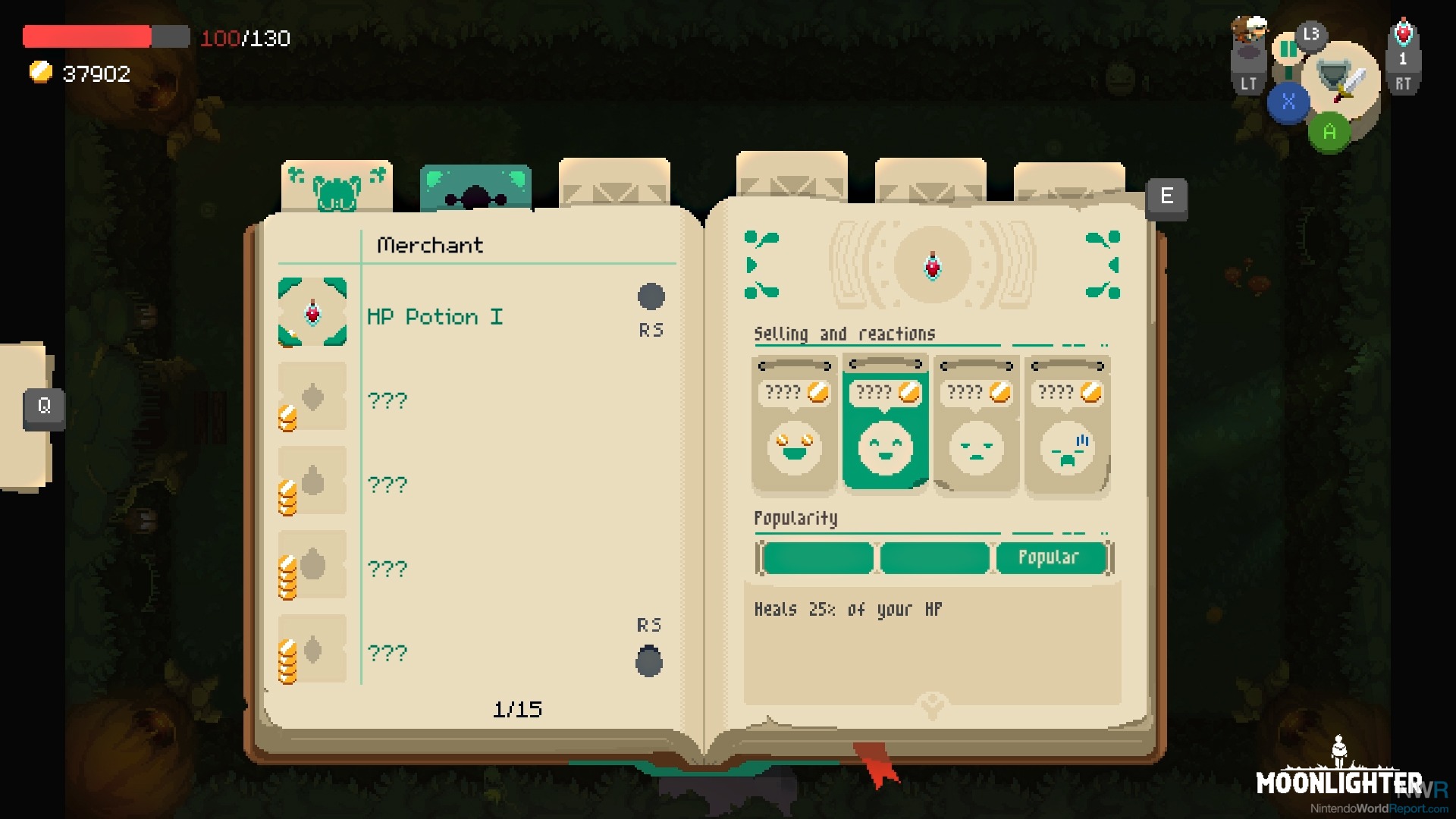 Now what are you going to do with all the gold you accumulate from your sales? Well, there are two options: reinvest it in your shop and town or upgrade your gear. You’ll absolutely need to do both, but how you go about it is left open to your discretion. Upgrading your gear requires gold and certain materials, some of which are difficult to find, but it will increase your HP and damage, making it easier to work your way through dungeons. I did find myself having to grind dungeons to get enough gold for some of the later game upgrades since the costs become quite staggering. Investing in your shop and town opens up new paths to make even more money and invite other shops to move into town. As your shop levels up, new options such as hiring an employee become available. There is even a banker who will come to town, whom you can invest with and hope to see high returns, but naturally this comes at the risk of losing your money.

Moonlighter both looks and sounds great. The art style is charming and each dungeon has its own distinct look and feel. The soundtrack is great, and I especially like that the music shifts slightly when interacting with different townsfolk. For the most part, it ran well in both docked and handheld mode, with only a few minor framerate issues. More concerning were the occasional instances where I was forced to restart the game. One of my portals back to the dungeon kept freezing on the loading screen and another time I went to transition to the next floor and was stuck behind the door. It does autosave when entering and leaving town, so I didn’t lose much progress, but it was a bit disappointing to have to redo a few floors.

The beauty of Moonlighter is how seamlessly it bends dungeon-crawling with a store simulator. Every action you take, whether it be in the dungeons collecting materials or in your shop earning gold to spend on upgrades, helps to move you further along towards your end goal. There were a few technical hiccups that cropped up from time to time and the last few upgrades needed a bit of grinding to unlock. But despite that, I constantly found myself falling victim to the classic “just one more run”.