Just in time for Halloween comes Friday the 13th: Killer Puzzle on Switch. A follow-up to the excellent Slayaway Camp, it narrows the focus of the horror satire by only working with the hockey-masked Jason and his various murderous rampages. While the player character variety might be narrower, new weapons are added to spice up the kills as you slide Jason around to murder innocents and eventually, and brutally, slay the “Final Girl.” The puzzling is still excellent, but the more limited parodies and the move away from blocky voxel graphics left me longing for the broadness of Slayaway Camp. 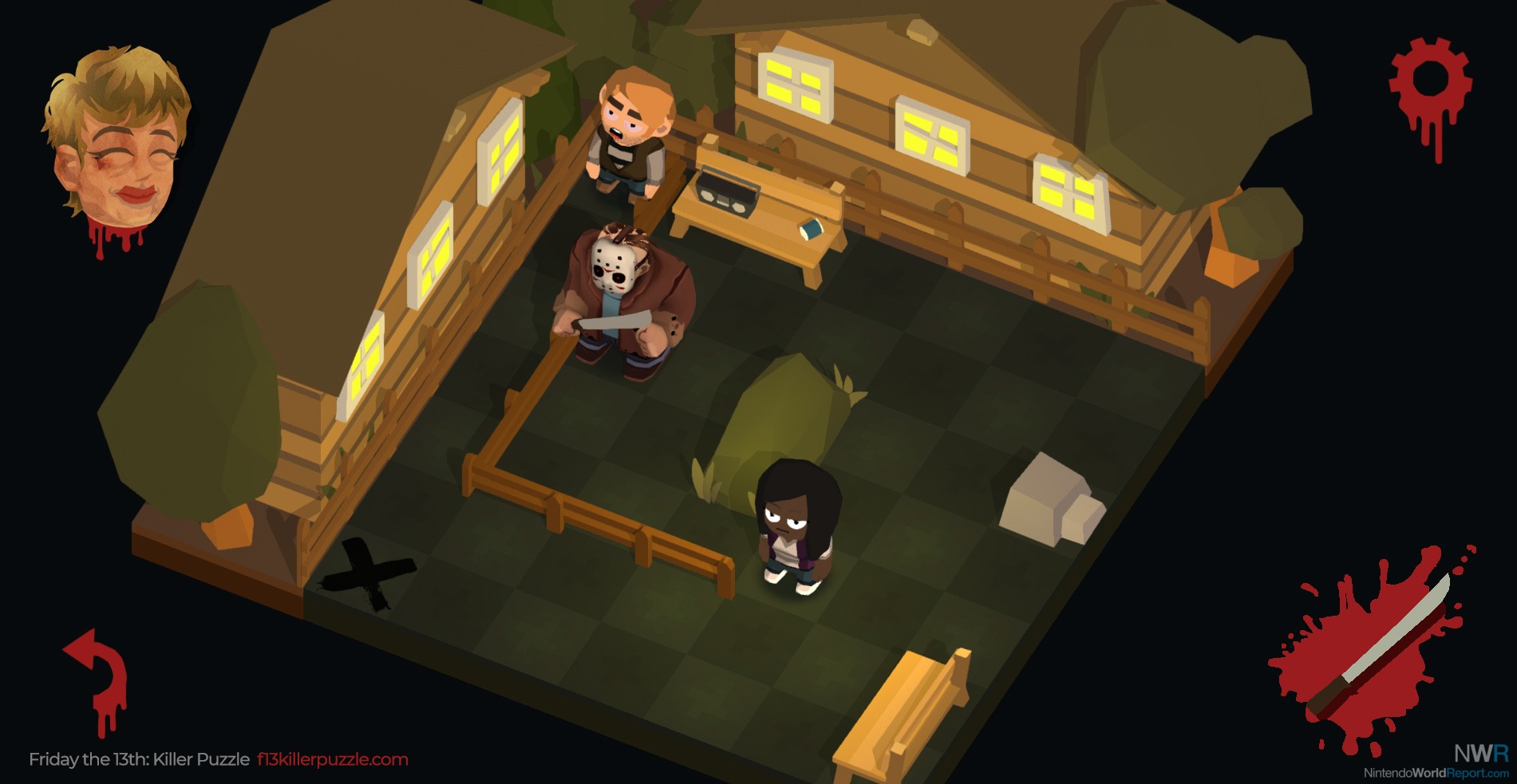 A charm permeated through the murders in Slayaway Camp because of the voxel characters. For Friday the 13th, the art style is a more realistic version of cartoony. While it is still abstracted, the violence was a little bit more gross, and I very quickly took the game up on its option to go from the R-rated gore to PG violence, which might actually be more comical in its implementation here. Characters disappear and just leave a skull as if they were cannon fodder in an old-school beat-’em-up.

13 stages are in each of the Friday the 13th movies here, which seem to be a mix of real and fake, though I’m not enough of a Jason film buff to know if that’s 100% true. Each one has a different Jason, though the variations are like “Jason but he has a winter coat now.” As you murder fools, you unlock new stages and weapons, the latter of which can be used to provide visually different kills. A variety of knives and blades are available, as well as goofier stuff like a hockey stick, toilet brush, and skateboard. The weapons are usually one-note jokes though. They’re nice to discover but not something I found that thrilling to collect. 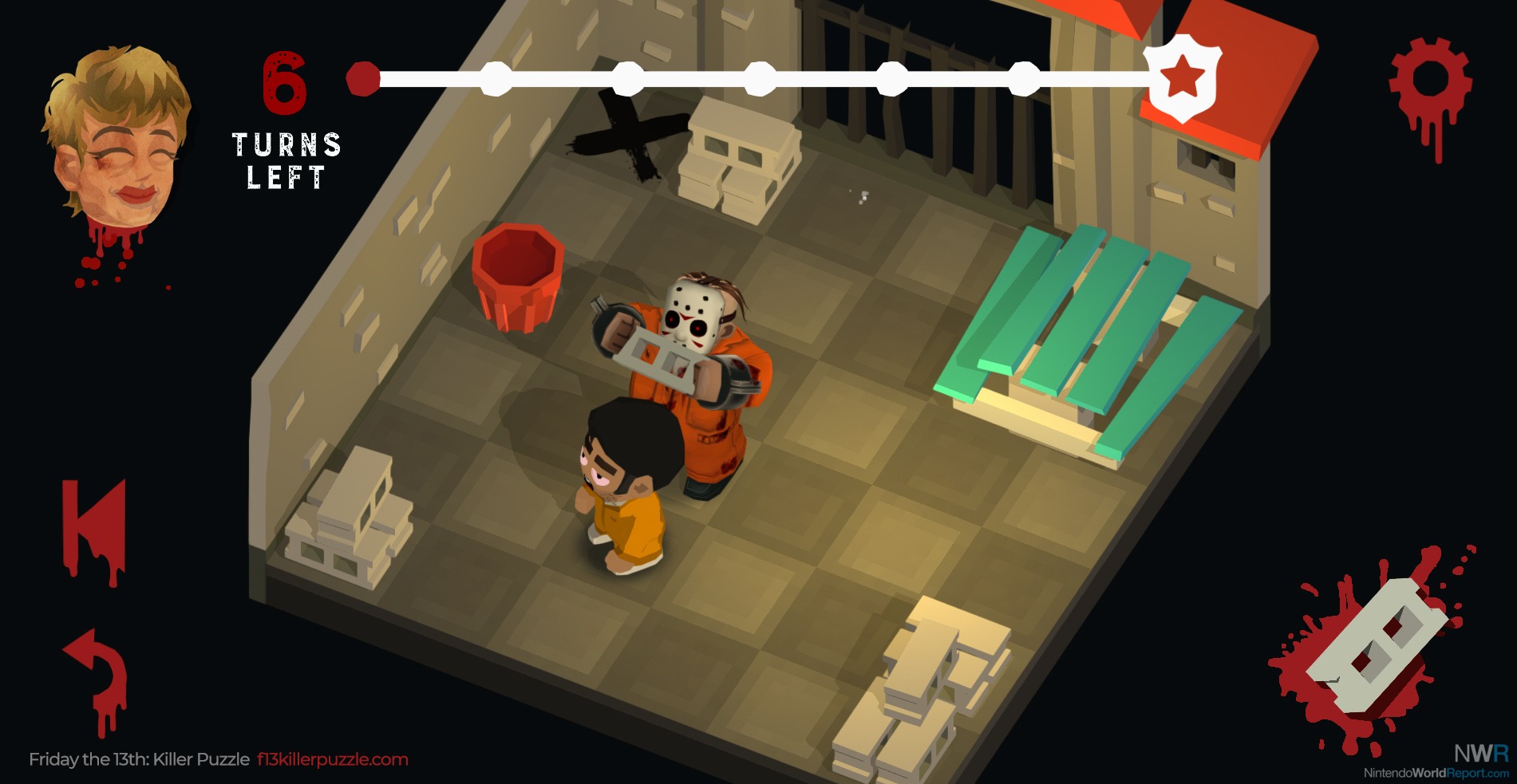 The puzzles themselves are the reward to me. Each one involves moving Jason around a grid-based arena as you position him to murder everyone and avoid capture or death. Like Slayaway Camp, new ideas are constantly added, keeping the experience fresh throughout. For better or worse, a lot of the same ideas from Slayaway Camp return, which means it won’t feel that new for veterans of that game. Still, it’s a damn good foundation as these puzzles are devilishly designed, especially as you get deeper into the levels.

A useful hint system helps alleviate potential frustration, with all hints coming from the decapitated head of Jason’s mom. She peppers the boy killer with words of encouragement. The writing is goofy and the hints are found in both helpful teasing sentences and complete solutions. You can also just skip levels if you’re stumped and don’t want to be spoiled. The interface for all of this is great, and it makes the whole experience better and smoother. 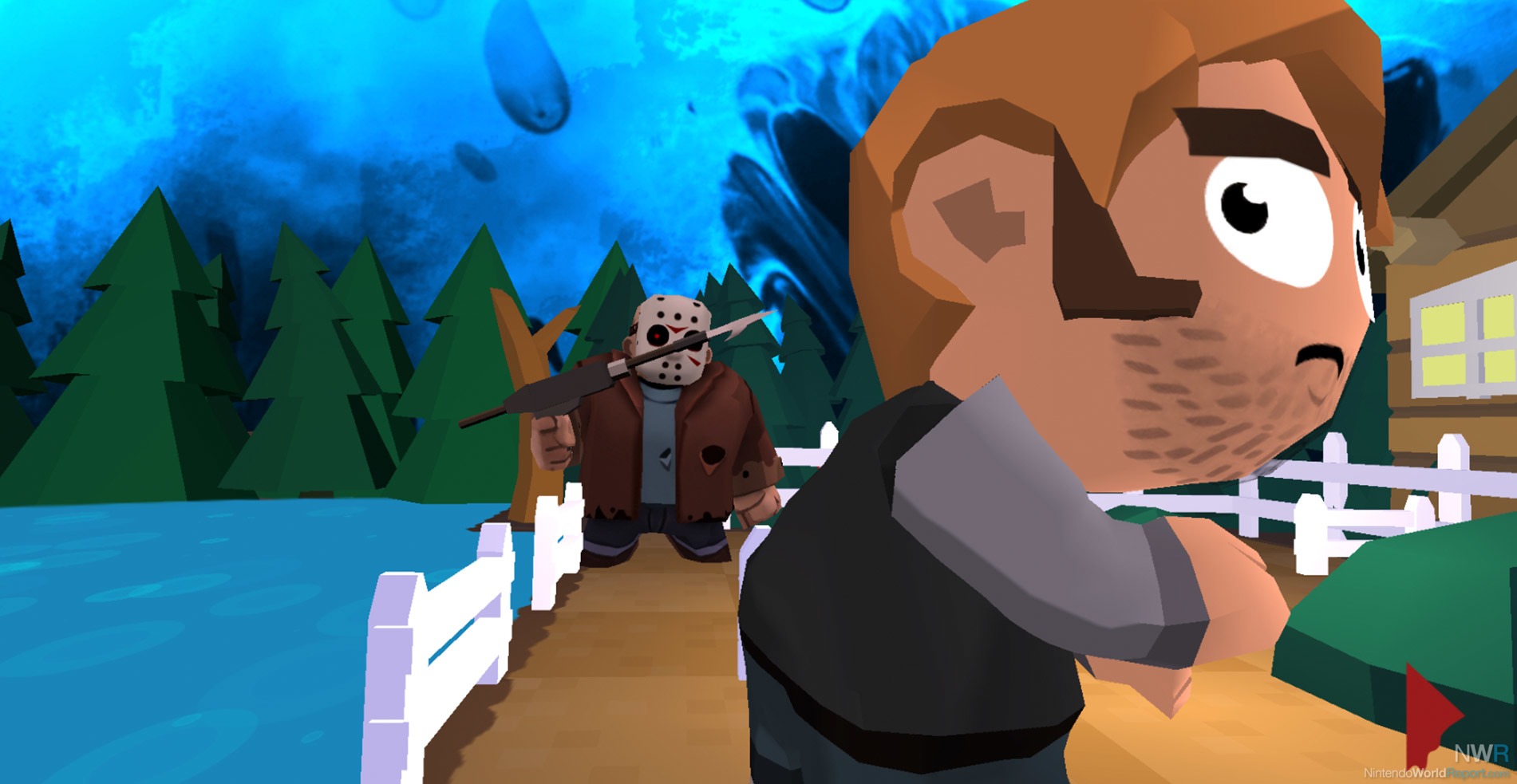 Two other modes are available in addition to the main stages. Daily Death offers up a special puzzle every day, complete with some unlockable secrets. Murder Marathon challenges you to do a bunch of timing-based kills in a row. It’s not something I did a lot of, as it’s just pressing a button when a cursor lines up on a meter.

I enjoyed playing more of the horror movie-tinged puzzles I loved from Slayaway Camp, but Friday the 13th: Killer Puzzle wasn’t quite as enjoyable as its predecessor. Maybe it’s because my affection for horror movies is more broad and not specific, but whatever the case, I wish there was more than just Jason present in the sequences and puzzles. That being said, Killer Puzzle has staying power and longevity, mostly thanks to the daily puzzles. I might prefer Slayaway Camp in a direct comparison, but both games are well made and fun.