A frantically different take on a classic genre.

If you take one quick look at Tricky Towers, you’ll immediately associate it with a certain other puzzle game. Wipe any expectations you have away now, because this block stacker is something totally unique. It’s a completely new challenge that puts a creative twist on a tried-and-true formula. 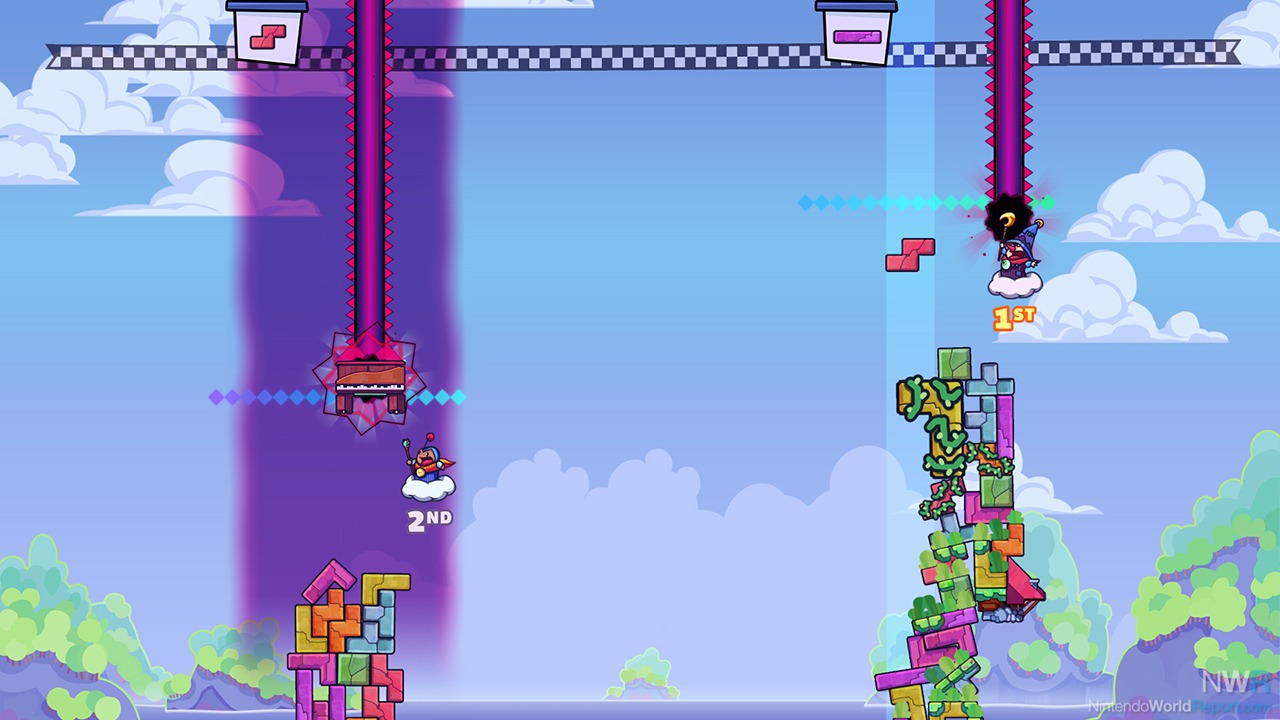 On the surface, Tricky Towers looks like many other puzzle games. Groups of four colored blocks fall from the top of the screen, and your job is to rotate and place them down on the surface. That’s where the similarity to the other games ends. Normally, you would expect the blocks to fit against each other in a grid formation. Here, that grid doesn’t exist. You can place bricks horizontally anywhere. That means if you want a clean tower, you have to work to line your bricks up perfectly. One little mistake will throw your creation completely off. Clearing lines doesn’t exist here either—you have to live with your mistakes unless you have an item that can help you out.

Your goal depends on which of the three modes you’re playing. In race mode, you rush to make the tallest tower possible in the shortest amount of time. The taller your tower becomes, the more you have to work to balance your creation and make sure it doesn’t come toppling down. That’s one of the most unique things about Tricky Towers: there are physics. Unlike other puzzle games where the bricks snap to each other, here you actually have to think about the weight of bricks and their placement within the tower. Puzzle mode challenges you to keep your creation under a line. There, the real challenge is making room for bricks and thinking ahead. If you don’t, you’ll run out of room very quickly. Lastly, survival mode tests your endurance against a slew of challenges, like giant bricks or locked bricks that you can’t rotate. 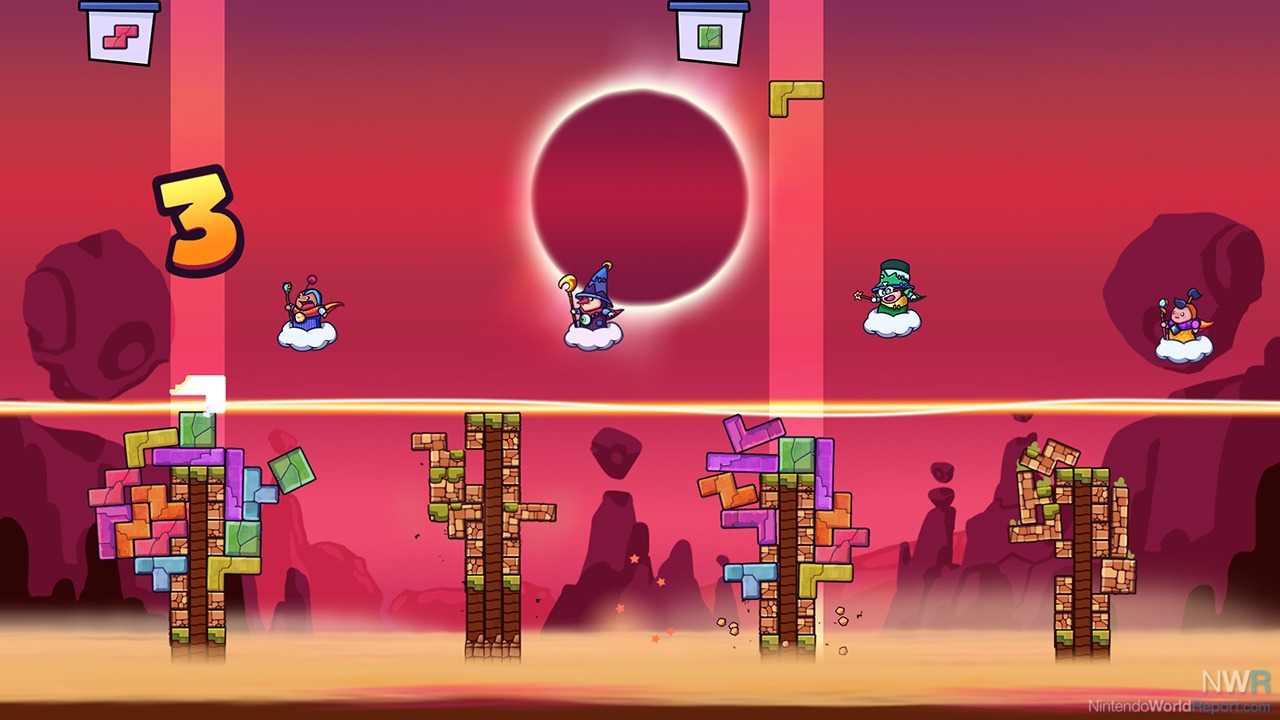 In single player, you have the option to play each mode endlessly or work your way through 50 trials. In the endless modes, you realize how quickly things stack up against you, especially when playing a race. The endless modes also show online leaderboards so you can compare your accomplishments against friends and the world. Only high scores are given as your reward for this mode. The trials are a good way to get acclimated with the game, but I soared through them pretty quickly. Like in endless mode, I was frustrated with the lack of any sort of reward other than a check mark indicating that I completed each level. I was expecting unlockable characters or themes, but the only way to get new visual flairs is to buy them as DLC.

Because of the underwhelming replayability of single player, you’re going to want to face off with a friend or online strangers. In local play, you have the option to configure the game any way you want—you can choose your mode, difficulty, and the number of rounds. Online, the game pairs you and your opponents with a random mode. This is disappointing to me, as sometimes I just want to race. 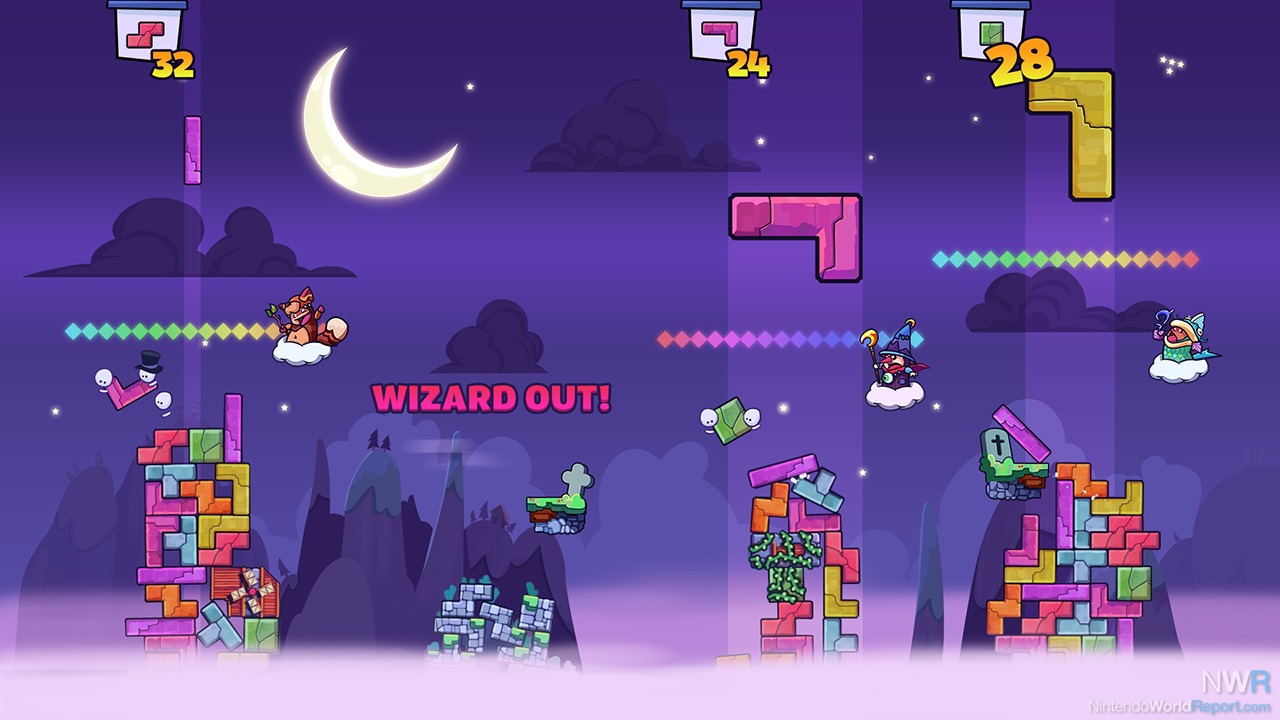 Four wizard characters and four seasonally-themed brick skins are available with the base game, and the rest are, again, only accessible through DLC. I like the idea of downloadable characters, but since the base game is devoid of any sort of reward for completion, I’d like unlockable characters from the start. The music is charming, but I became tired of it after a few games.

Tricky Towers is an incredibly creative and unique take on the puzzle genre. I just wish there was more to unlock and explore as it does have incredible potential. Nevertheless, I do recommend this brick-stacker to anyone looking for a fun local and online multiplayer experience.