Fans who've been looking for a game that comes close to the feel of the classic RC Pro-Am may want to chiki this title out...

One of the best things about indie games is how they can show up out of nowhere, have a relatively unassuming look, and then blow you away with how well they play. That’s very much the case for the colorful voxel art racer Chiki-Chiki Boxy Racers, a title I hadn’t even heard of until it hit the eShop. Rather than being yet another dull shovelware racer (there have been quite a few), Boxy Racers instead is quite a bit of fun, featuring an intuitive and effective control style and viable options for playing solo, with friends, or even online. 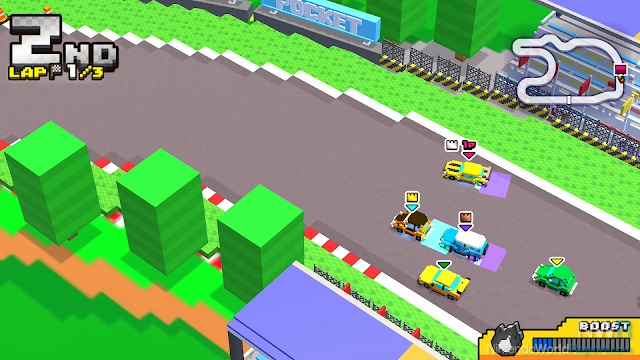 If you’re going to go it solo, three different locales are offered in the Racing mode, each having a circuit of four tracks a piece, topped off by a grand prix. Granted, I didn’t find winning it all against the CPU opponents to be terribly hard, but taking first in every race does at least unlock each of the wide variety of vehicles to expand your options. Battle mode is offered for solo play, I suppose to let you get an idea of the four available modes that offer some variety. Those are more ideally played locally against friends or online, though the times I attempted to find someone to play with I wasn’t successful.

What really impresses me with the title is its controls, something that so many of these budget racers have gotten completely wrong. While you have the option to go for a more traditional throttle and brake method, the winner is the default style that lets you simply point the joystick in the direction you want to go. Sliding around turns feels particularly good and intuitive with this style, even with many hairpin turns. A boost that slowly builds up and a few power-ups, as well as a random oil slick, are present on each track but the emphasis is really on being smart in how you take turns and out-positioning your rivals, perhaps bumping them a little. 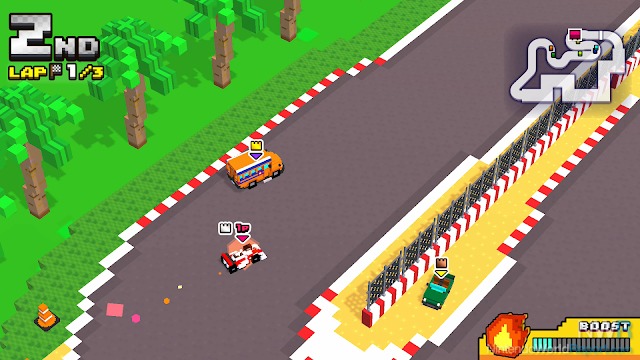 For a very budget-friendly racer, Boxy Racers delivered a far higher level of quality and polish than I expected, even if not necessarily the challenge. The racing itself reminds me most of the classic RC Pro-AM back on the NES, though this control style is far superior. While experienced racers won’t likely struggle to get through all three circuits, if you’re able to play against a friend, or online play picks up, I could see where it would make for great competitive racing or simply goofing off in one of the four diverse Battle Modes. There’s a fair amount of quality racing in this low-cost title, and I’d love to see more of it… hopefully with a bit higher degree of difficulty.