One part anime, one part bullet hell, a dash of weirdness... and mix for a truly unusual concoction.

When you think of bullet hell shooters, usually some sort of air or spacecraft blasting it out come to mind, not anime chicks taking down small, cherubic characters and other characters more their size as bosses. Nonetheless that’s the name of the game in Azure Reflections, an off-the-beaten path take on the genre that also happens to shift from the traditional vertical orientation to the horizontal. While it may not be a long-lasting experience, it is certainly an intense one and to be successful you’ll need to come to terms with its unique systems. 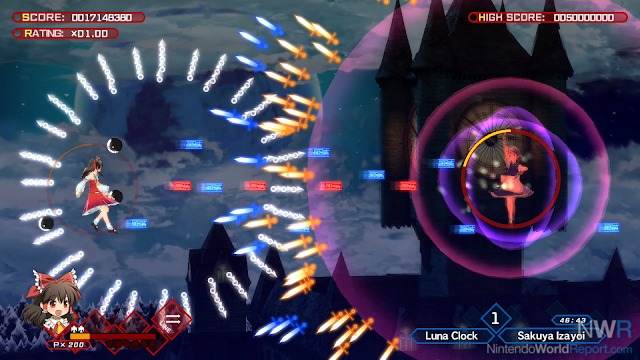 The first thing you should absolutely do if you pick this game up is check out the Tutorial, as the bullet absorption and break system are critical to your success against bosses and they take some getting used to. While for the majority of the stages you’ll be shooting at enemies coming from either side, there’ll be tougher enemies and the bosses who you can weaken with your normal bullets but not take down entirely. That’s where the break system comes in, requiring that you take down their shields to a low level, try to get within striking distance, turn on your absorbing shield, and rack up the hits to add to your counter-attack power.

It may take a few attempts to really get the hang of how best to use this tactic, along with carefully conserved cards that clear the screen and smaller bursts you can use to knock out bullets immediately around you. It’s something quite different, it’s challenging, and it’s all a bit bonkers. If you’re successful, you’ll be able to unlock two additional characters past the one you start with, and playing through with each changes up the gameplay quite a bit. You can purchase additional accessories that enhance specific powers as well, which encourages repeat play. 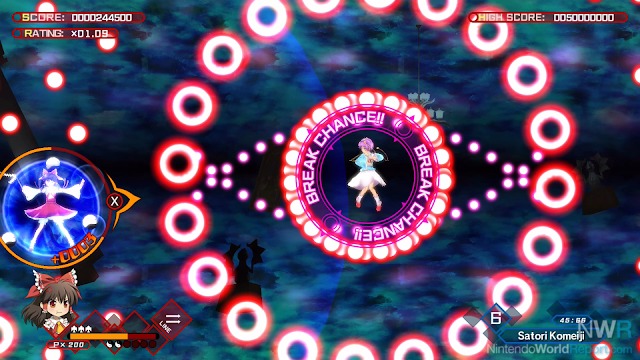 In terms of issues, probably the biggest one I have is that since the game is so colorful it can get very difficult to make out what’s shooting you, their fire, rewards from fallen enemies you want to grab, and the often dynamic backgrounds behind the action itself. It can be very easy to miss incoming fire with this visual cacophony in front of you and that can lead to frustration. Compounding that is the fact that at times when you recover from being hit and stunned you’re still stuck in a mass of bullets, ensuring you’ll just take multiple hits in the same sequence and get knocked out entirely. While these issues don’t necessarily cripple the experience they do make it hard in places for the wrong reasons.

If you’re a big fan of crazy shooters, and especially if you appreciate anime art and funky humor to boot, Azure Reflections may not be the best out there but it very much stands out as unique without question. Rather than go the path of merely imitating one of the other popular series it brings a few ideas of its own to the table and that’s always refreshing. Just be ready to get visually assaulted along the way, it’s one of the most colorful shooters I’ve ever seen.