It’s the Labo kit we deserved, but also the one we needed right now.

I’m not afraid to say that I’ve been a vocal critic of Labo. Not so much of the idea, as I’m completely on board with what Nintendo is trying to accomplish, but I felt they just didn’t execute that vision in the initial offerings. With my 30 years of history growing up with Nintendo, I didn’t doubt they could get it right eventually, but I had my reservations. It didn’t take long for the professionals over at Nintendo to figure out the shortfalls, and with this second offering they’re back to their masterful ways. By focusing much more on the software, the Labo developers have created an experience that is worthy of the time and effort required to finish the construction, and the software and Toy-Con provide hours of entertainment long after you’ve finished your final folds and creases.

Putting together your shiny new Labo Vehicle Kit isn’t much different from the two previous, though the pacing of the construction is a noticeable improvement. The Vehicle Kit is completed in 4 stages, with each section taking one to two hours to complete and finishing with the opportunity to test out the newly-built Toy-Con in the field. It’s the perfect weekend project for you and your children; the on-screen instructions are easy to follow and my 7-year-old was able to build the majority of the kit with only light supervision. It’s easy to lose the interest of a child, but the one hour it took for most sections was the perfect amount of time to keep him engaged and rewarded him with a vehicle to pilot at the end.

The Toy-Con can be built in any order you like, with the one exception being that the gas pedal will need to be the first project. The gas pedal is universal, controlling the acceleration of whichever vehicle you have put the ignition key into. After putting together the accelerator, a short mini game akin to a slot car track gives you a small reward and a short break before beginning construction of the first vehicle. The pedal feels surprisingly solid for cardboard, and has so far survived the rough housing of a couple rambunctious children. 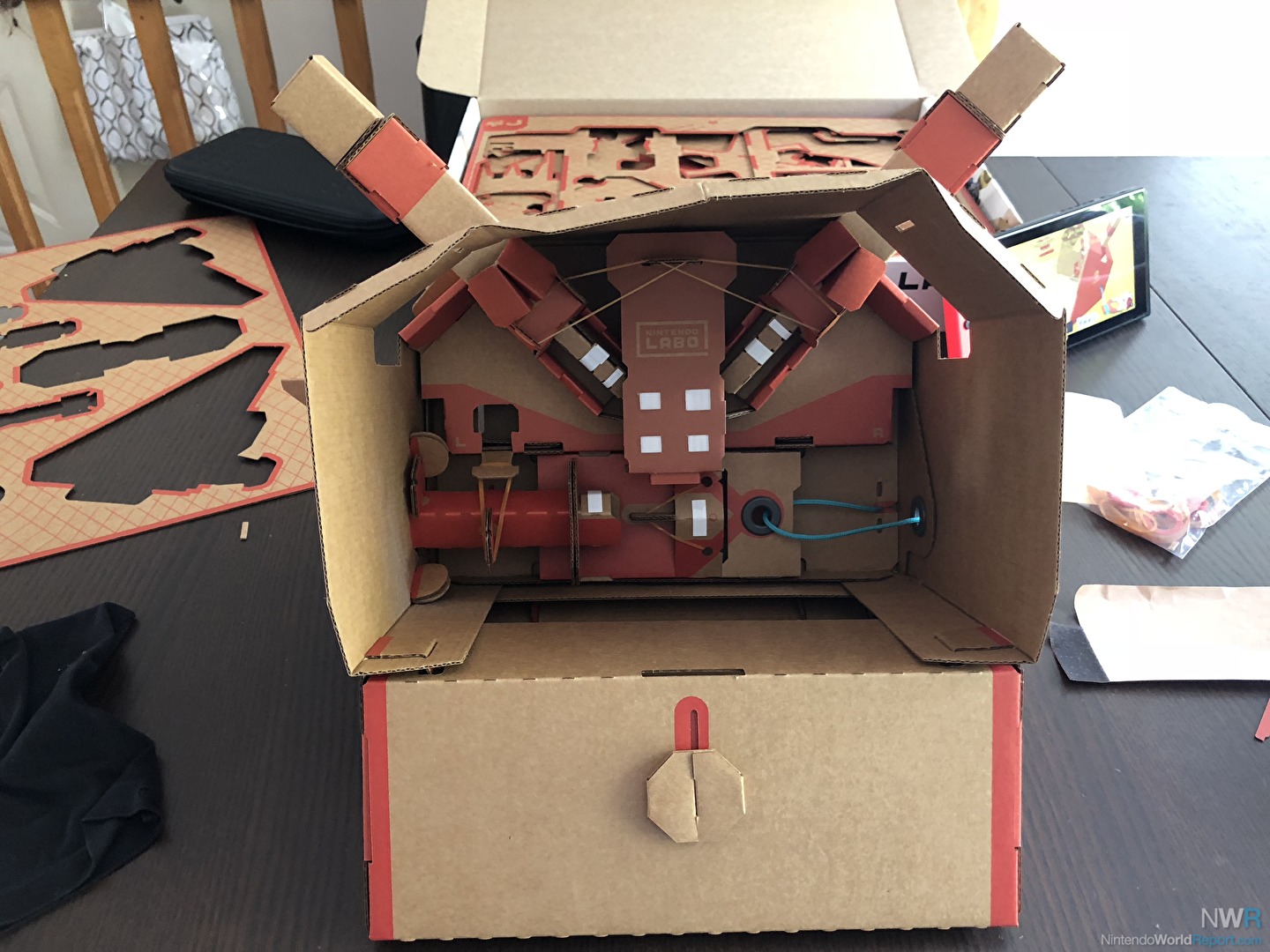 The most elaborate of the three projects is the All-Terrain Vehicle (ATV). It took a little over 2 hours and has multiple phases that all come together in the end. The steering wheel feels pretty solid and sits on a base to give it some extra weight. Driving the ATV feels smooth and it is easy to control. The speed is a pace that will feel fast for a young child but is consistent enough for an adult to always be in control. A turbo pulley is on the right of the base for some extra speed and provides a nice little boost to get some distance on the jumps. A lever on each side of the wheel provides weapons and gadgets that can be selected and switched on the fly. Bombs can be thrown to destroy enemies, and a saw can be used to cut down trees. Refueling is always done through the ATV and a cable connects to the power station when you are within range. The highlight for my son was the paint studio. An included accessory is a cardboard spray can that allows you to paint the ATV in the colors of your choosing. It’s completely unnecessary to the experience but is further proof that Nintendo knows what kids like. 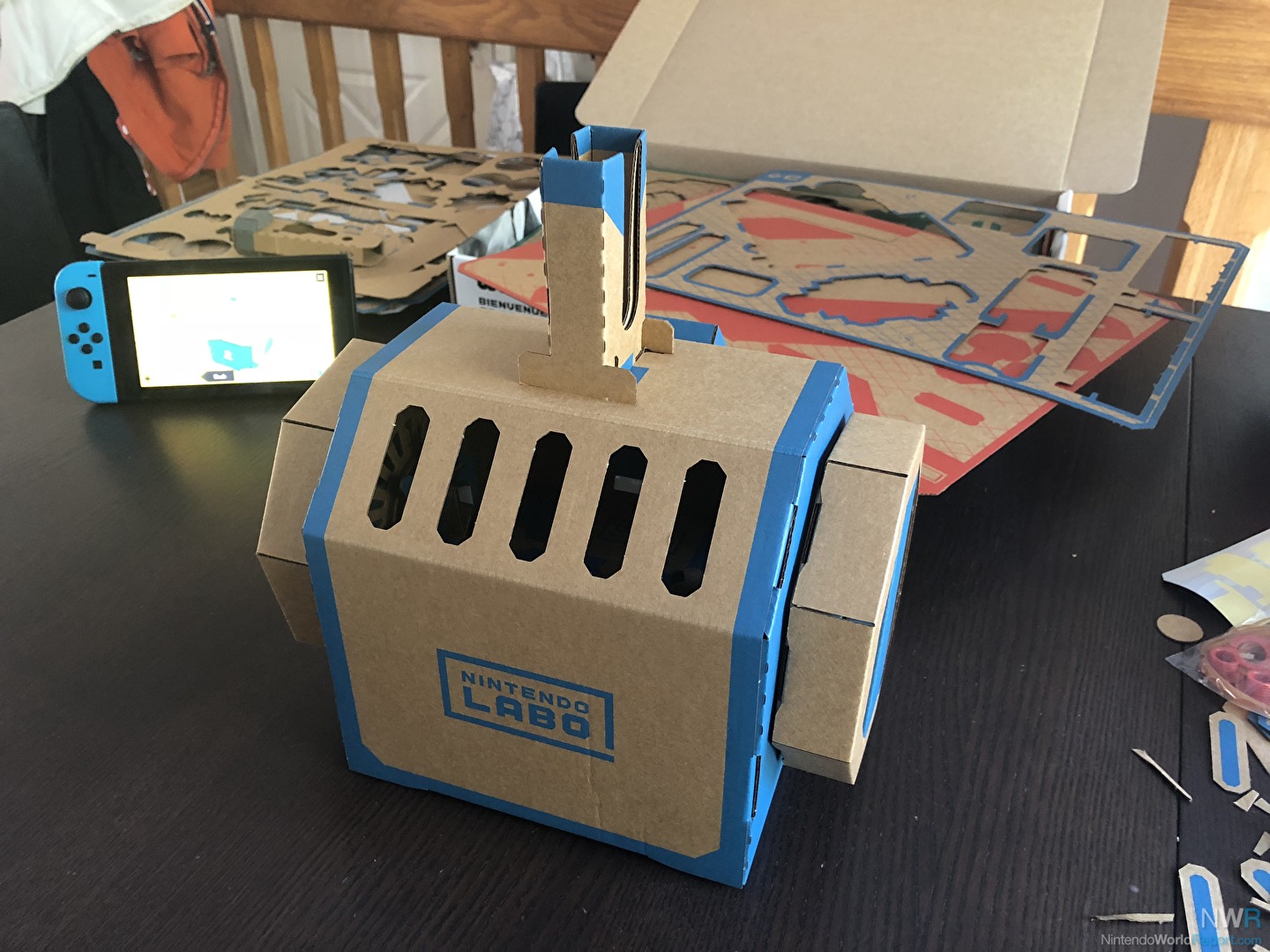 The submarine is easily the most awkward vehicle to steer but provides for some memorable moments. Movement is propelled by dual fans that are controlled by perpendicular wheels on a base. By twisting each wheel you control the direction of the fan which will propel the submarine in any direction. Turning requires rotating the wheels in opposite directions, and more often than not I would find myself going in the wrong direction because my mind just couldn’t get used to the movement. It was a great opportunity for my son to show me up though, so I left most of the underwater exploration up to him. The submarine interacts with the environment by using a grappling hook that is equipped with sonar. By hooking onto an item and then reversing, you can pull and move objects underwater. 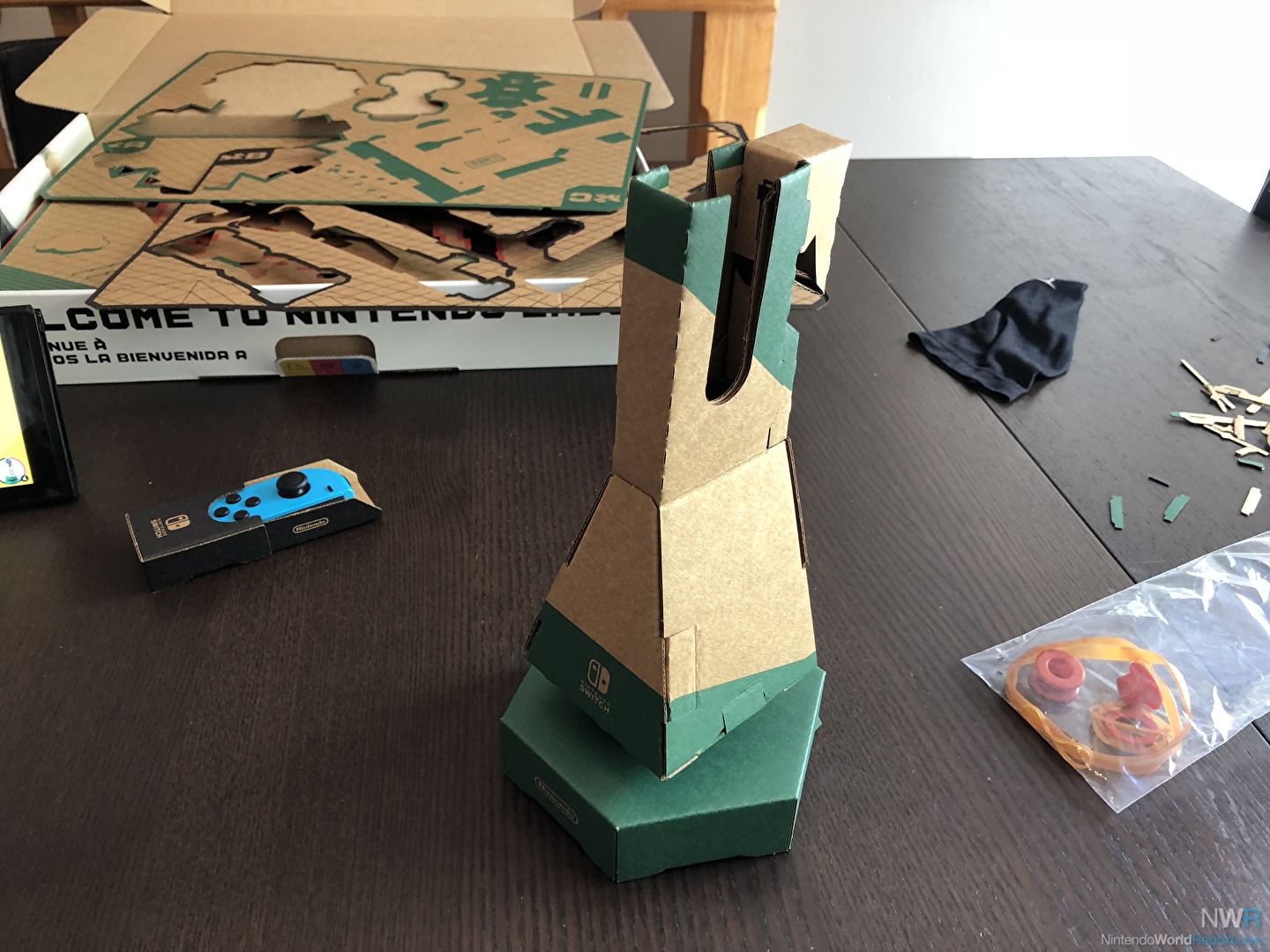 My clear favorite was the final and easiest vehicle to assemble: the airplane. The Toy-Con Stick took a little under an hour, but it’s the vehicle I’ve spent the most time exploring with. It feels fantastic; the flight is very responsive, and I was surprised and excited to learn that it included a trigger to lock onto targets and blow them out of the sky with missiles. While the steering wheel is likely getting some extra mileage in Mario Kart, I’m more excited over the potential of the flight stick in future Nintendo games. If a version of Pilotwings, or some sort of air combat simulator, is released with Toy-Con support, I will be purchasing it day one. My only reservation is that it sits on a cardboard spring that has held up so far, but I can envision a time in the future when my over-eagerness on a turn results in needing to order a replacement. 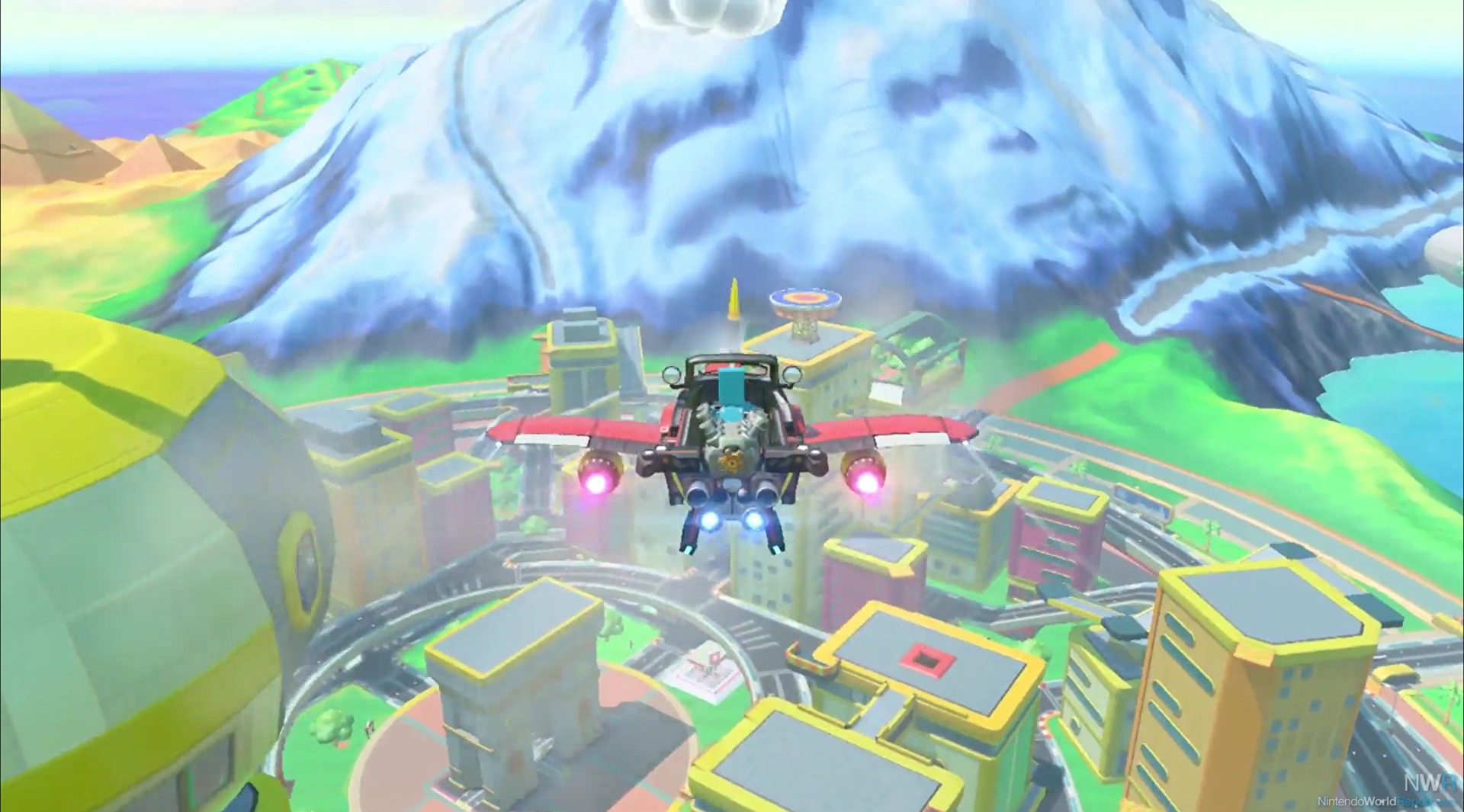 The crown jewel of the new Vehicle Kit, and the most impressive upgrade from the initial Labo offering is Adventure Mode. Nintendo’s answer to replayability was to create a beautiful, large expanse in which to spend hours exploring and completing quests. The vast world consists of 10 hexagonal areas each with its own respective theme: City, Desert, Beach, etc. Each area has 8 different tasks to complete, all of which are tracked on a map that is revealed after you’ve fueled up at the respective area’s power station. The tasks are spread out in a way that requires usage of all three vehicles, whether its picking up a passenger and taking them to another location, or searching the terrain for hidden chests. Switching vehicles is very easy; simply pull a key out of the ignition of the vehicle you’re currently driving and the vehicle will convert to the newly activated vehicle. I had quite a fun time surveying the land in the airplane and then pulling chute when I spotted something of interest to parachute in as the ATV or Submarine.

While the Variety Kit did provide some entertainment, I felt that the replayability of that initial Labo came up short, which led to my reduced enthusiasm in the product line. If you had a similar feeling to what I did, don’t let that previous experience prevent you from trying out this new offering. Whether Nintendo learned some lessons during the first run or if the extra time in development allowed them to release a more polished experience, I’m not sure. But what I do know is that the Labo Vehicle Kit is miles ahead of its predecessors and has made me excited again about the future of this franchise.

Im going to buy this one. The game part of it seems like there is a lot more to it than the previous two packs.

I streamed for 5 hours making the pedal, key and wheel. This Labo kit is extremely impressive
https://youtu.be/YtrEggLvcWg