It’s like eating sushi from the grocery store, it’s good but you can get it better elsewhere.

Before you sharpen your pitchforks and light the torches, let me just say, Wasteland 2 is fantastic. So good in fact, that I would recommend it be added to the must-play list of anyone who enjoys computer role-playing games. The wonderfully complex skill system, expertly designed combat mechanics, and open-ended progression make it one of my favorites from the genre. But with many Switch games that were initially designed to be played on PC, compromises are an unfortunate reality of the porting process. Compromises like a cumbersome UI, uncooperative camera movement, and several performance issues may be too egregious for some, and detract from the experience for the rest.

One of the great strengths of Wasteland 2 is the vastness of the world and the large variety of trouble you can get yourself into. It follows the story of the Desert Rangers, a group of army engineers that survived the apocalypse while stationed in Arizona. Prior knowledge of its predecessor isn’t required to understand or appreciate the story. As the newest recruits, you’re tasked with investigating the death of one of your comrades but the path you take to accomplish this is largely up to you. Post-apocalypse Arizona has a number of different settlements and outposts each with their own set of problems that you can choose whether to assist with. Many of the quests require you to pick a side, but you could even just wipe out the parties involved if you don’t agree with either of them. What it all adds up to is that you could play through the game multiple times and never have the same experience twice.

My favorite aspect of computer RPGs is a robust inventory system, and Wasteland 2 doesn’t disappoint. I spent many enjoyable hours optimizing weapons, armor, backpacks, trinkets, and ammunition across my many squad members. Equipment and ammunition is in short supply early on, rationing bullets and trading guns among squad members is an unfortunate necessity. Some patience will be needed with the inventory UI though, not only is it fairly convoluted, but button presses have a slight delay. I’d be lying if I said I wasn’t cursing out the lag, but after a few hours I just accepted it and made sure that I was being as efficient as possible when it came to shuffling inventory. 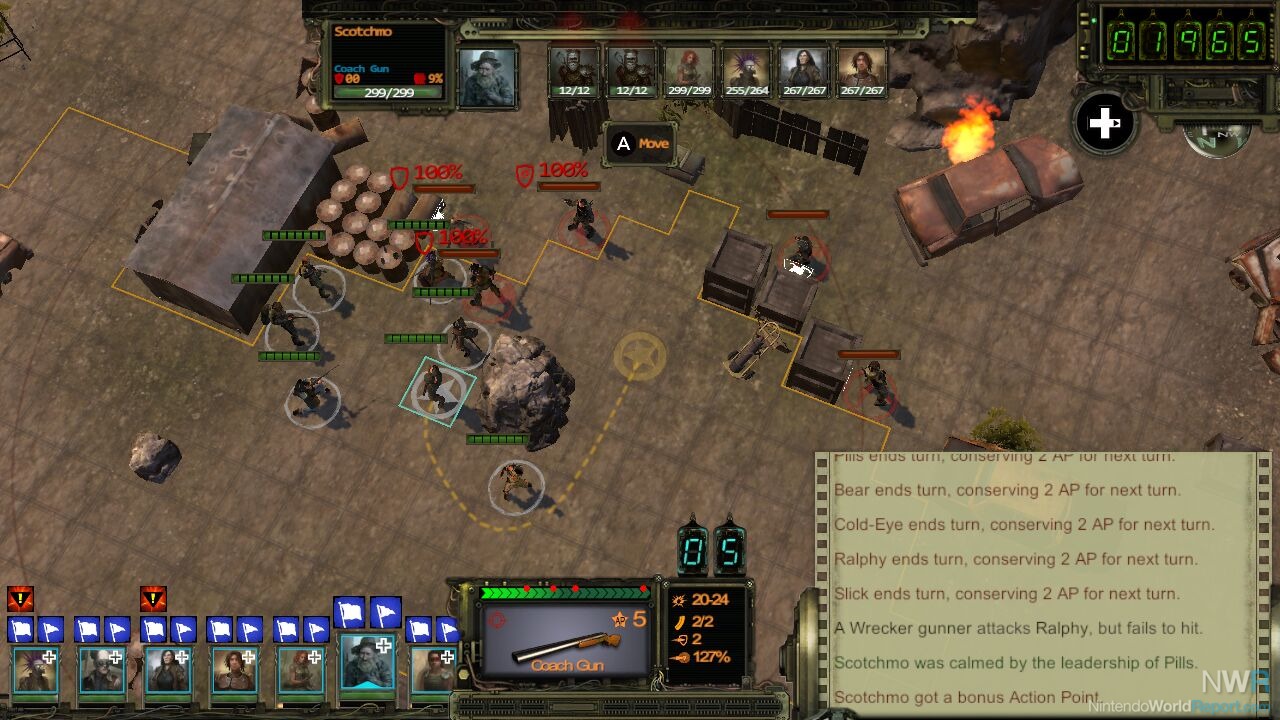 Adding to the variation of gameplay is an expertly designed talent and perk system that allows for the creation of expert classes. A default team of Rangers is an option to start off with, but if you’re comfortable with the allocation of stats you can create your own custom squad. Having a balanced team has its advantages, but if you want a squad full of expert snipers there’s nothing stopping you. It’s a feature that allows for variation over multiple playthroughs but can catch new players by surprise. In my first attempt at crafting a squad my strategy of having four balanced members backfired as it left me with only one member with a firearm since none of the other characters had a high enough rating for weapons. Wasteland 2 highly encourages you to assign roles to each character as the experience points allocated as through level up won’t be enough to raise the talents enough of a balanced fighter.

It takes a little while to really understand the combat mechanics, but you come to appreciate how well they were designed once you’ve mastered the fine details. Battles can break out anywhere and once you’re close to an enemy that wants to do you harm the area around you becomes the battlefield. Attacks are turn based, with the combat options available restricted by action points that can be used to move around, use a skill, or attack with a weapon. What I like most about the combat is that no one strategy becomes the default way to win a battle. The type of enemy, objects on the field, the terrain, even the amount of ammo you’re carrying will dictate and vary the best strategy to victory.

That’s not to say the combat doesn’t have it flaws. One of the unfortunate by-products of porting to Switch is trying to map keyboard and mouse inputs to a controller, and the result is awkward at best. The selection of most of the combat options is completed with the shoulder buttons, which can become a slog when you have a lot of enemies to contend with. Skill and combat options are shown by bringing up a selector wheel with the ZL and ZR buttons respectively. Once the wheels are on screen you then have to scroll through the various enemy and object options with the L and R buttons. Often the target you’ve selected can reset back to another option, usually when you change from the initial action of choice, but this can also happen randomly. It’s a far cry from move your mouse to an enemy and selecting the preferred action.

As cumbersome as the action selection can be, my single greatest source of frustration is the movement of the camera. During combat, a lot of information appears on the screen and trying to read it all will require a lot of camera movement. Whether in handheld or docked mode, the selection wheels take up much of the screen real estate, so when it comes time to finding the right enemy you’ll often be moving the camera around to get a good look at them. The camera placement is controlled by the player at all times via the right control stick. The actual position of the camera can be moved, but if you need to change the angle then you need to push down on the right control stick to switch to the angle selector. If that wasn’t enough, under the right stick selector is also the control over how large the log book appears on the screen. So when you want to change angles you can often end up with a screen full of log book instead.

The best way to experience Wasteland 2 is undoubtedly on PC, but if that’s not an option the Switch version is an acceptable, though compromised solution. A healthy amount of patience and a reasonable amount of stress toleration will be needed but ultimately it will be worth it. If your spirit hasn’t been broken by a frustrating camera or delayed inputs then the daily game crash right before you’ve saved your progress may be the final straw. As frustrated as I may have been at times, the highs certainly outweigh the lows, and came away with the feeling that any version Wasteland 2 is with playing.