A boxer with a duck head isn’t nearly as strange as this game gets.

Pato Box caught my eye because of its striking ink-only artstyle, in which everything is drawn in the style of a black and white comic book, and its premise of “Punch Out!! outside of the ring.” These two unique ideas make Patobox stand out, but also ultimately TKO the game.

Patobox, our titular hero, is a duck/human hybrid with the body of the heavyweight champ and the head (and brain) of a duck. Sponsored by Deathflock, an evil multinational with an eye on world domination, Patobox has cruised to boxing world champion on the strength of his blows. His strange genetics are at the heart of his sponsor’s scheme, and following their betrayal it’s up to Patobox to stop their evil plan using only his boxing skills. It’s a silly, fun, plot that’s moved along by a cast of outrageous characters, many human/animal hybrids themselves. 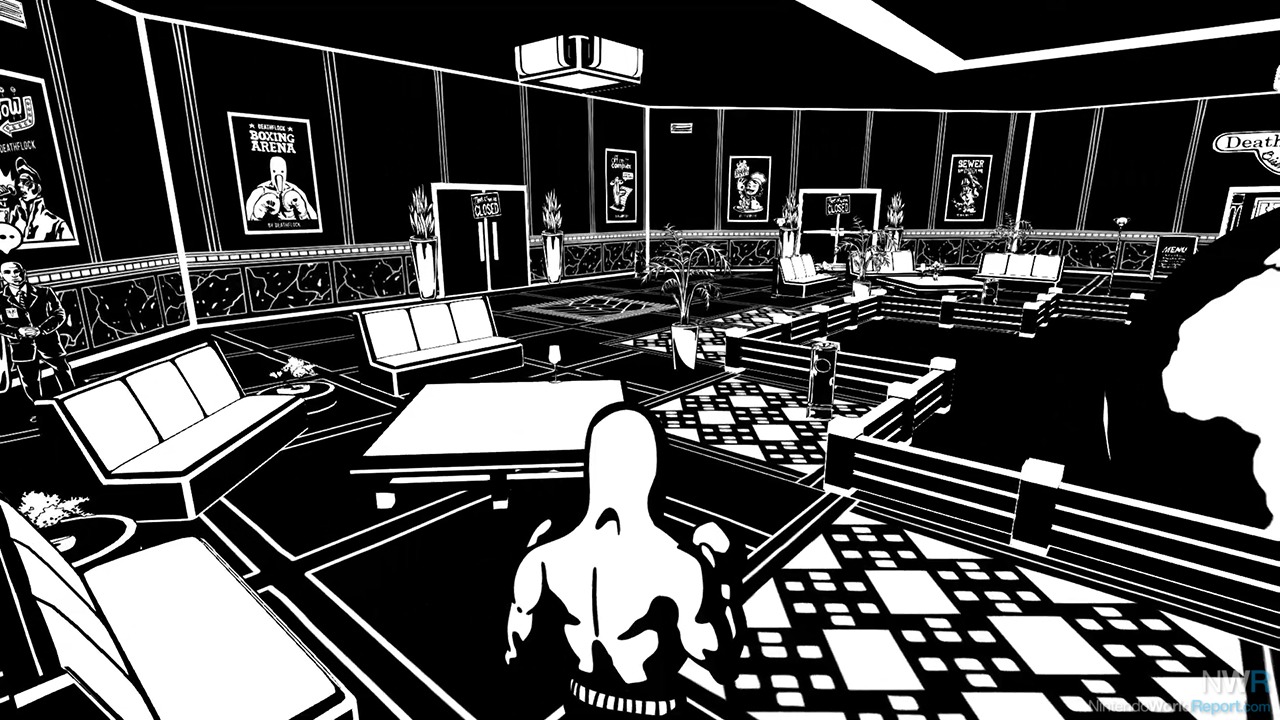 For an evil corporation, Deathflock has a classy lobby.

Pato Box, the game, is also a hybrid of two different gameplay styles. Each of the game’s approximately half-dozen stages starts with an exploration mode where Patobox searchs Deathflock HQ for hints as to their evil scheme and to hunt down corporate leadership, once he finds them it usually transitions into a Punch Out!-styled boxing matches against members of Deathflock's C-Suite.

The exploration segments do feel a bit like the boxing mechanics, with Patobox only able to interact with objects via his fists, but they’re structured as open spaces populated with seek-and-find tasks and minigames, all of which must be cleared in order to access the boss fight. Patobox himself moves sluggishly in these spaces, and the black and white graphics make seek-and-find tasks like “collect all 10 party hats” to clean up after a corporate party take an interminable amount of time. The minigames are usually some variant on “destroy stuff,” which everyone in this world accepts is pretty much the depth of his duck brain’s capabilities. Some stages involve more puzzle solving or environmental hazards. A stage in a meat processing plant is full of slicing buzzsaws and crushing pistons. The tank controls, Patobox’s sluggish locomotion, the deliberate graphical choice to make the game look more 2D, and the incredibly unforgiving checkpointing make that segment in particular an egregious exercise in frustration. 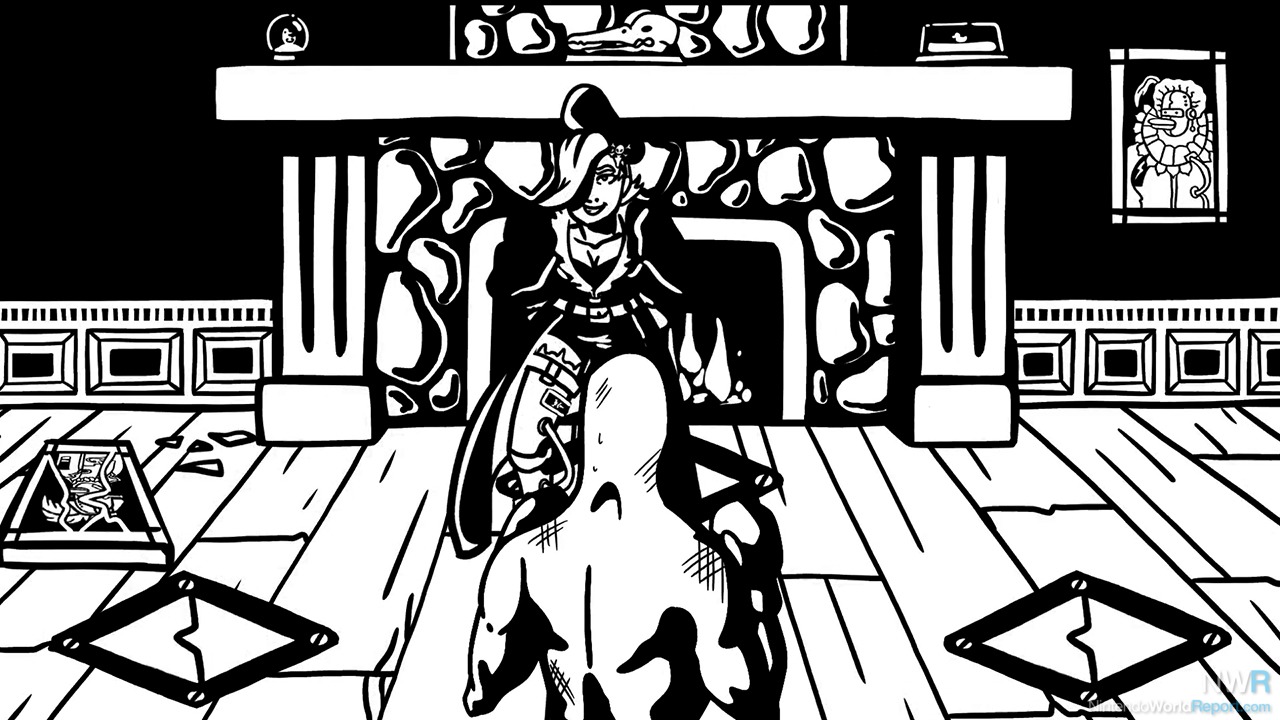 Her robot leg will not save her.

The game fairs better in the ring. Each opponent has a gimmick, such as the security chief who has replaced portions of her body with cybernetics and requires you disarm her security system mid-fight or the chef who is weakened when you punch poisonous things into the stew he regularly samples. There is effectively no checkpointing, a knock-out means back to the start, and given the length and difficulty of these fights, that’s especially tough. A win only comes after three knockdowns, each punctuating a distinct phase of the fight, but one fall is all it takes to end Patobox’s run.

Mechanically, this game isn’t as polished as a Punch Out!. The dodge windows and enemy tells feel less discrete and the timing the game demands on blocking some enemy attacks feel out of sync with the recovery time on Patobox’s animations. It’s all doable, but with an unforgiving checkpointing system, it is very difficult to learn the third phase of a fight. Enemies have both small and infrequent vulnerability windows, but take upwards of 17 shots in order to advance to the next segment. One boss in particular, a feathered DJ turns the entire game on its head by making it into a rhythm minigame, in which Patobox needs to constantly block on the beat - except the select moments in which he shouldn’t in order to fill an attack meter. This fight is pure misery. 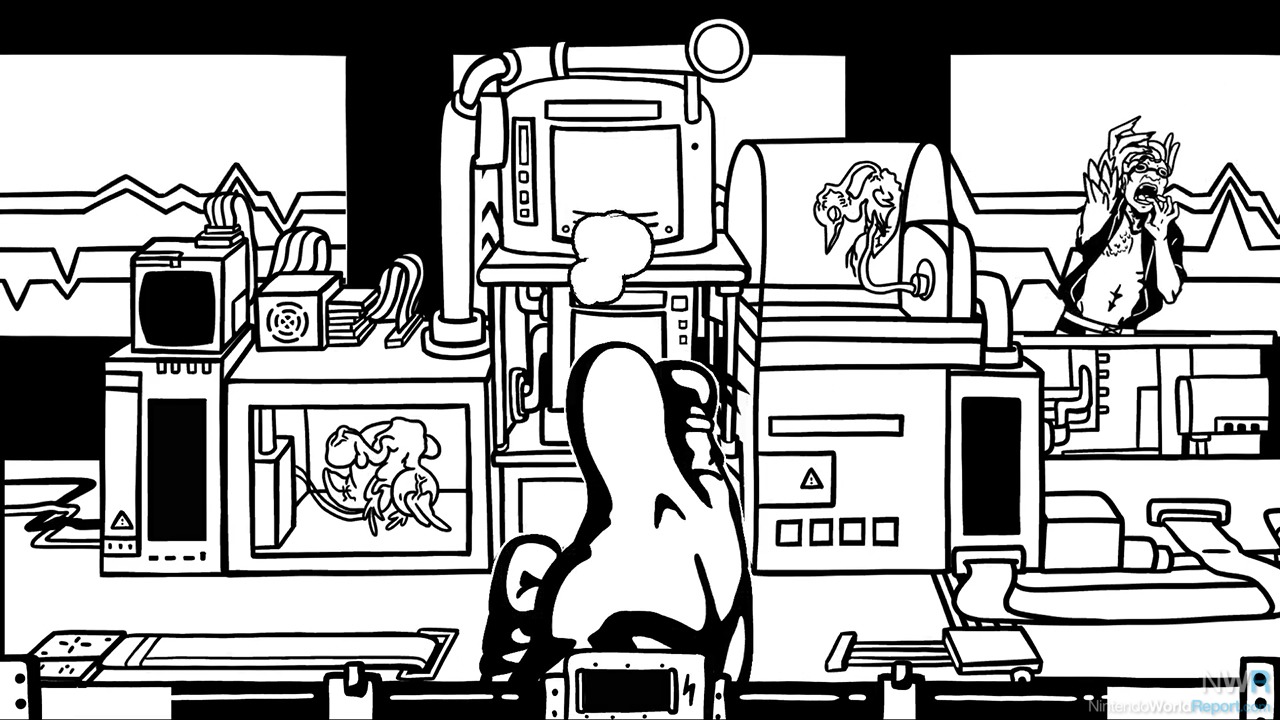 The game features optional motion-controlled boxing, but it seems improbable that anyone would be able to clear these fights with them. The non-motion controls are pure Punch Out!.

The style is undeniable. Patobox’s goofy head on his muscular body is just the start to a long cast of outrageous characters, each rendered in the ink-pen style. The 3D world looks very much like a 2D image and captures the look of a comic book. Visual storytelling abounds, with scenes like a meeting room where a cartoonish PowerPoint presentation is showing how they intend to use Patobox’s DNA to infect the water supply. The writing is similarly clever, and the abundant flavor text is worth stopping to read. However, the lack of contrast in the style can hide interactable objects or make it tough to spot enemy attacks.

Pato Box has a neat idea: take your boxer out of the ring and into the corporate world. It tells a story fittingly silly for a boxer with a duck’s head. However, the lack of checkpointing and overly long exploration segments are a one-two punch of frustration. Some floors of Deathflock HQ seem impenetrable and while the boss fights are the star of the show, even they aren’t without problems. The concept isn’t beyond saving, and it’s still possible to have a good time, but too often Pato Box just left me incredibly frustrated.

I'm surprised you scored the game this high. It seemed like torture.

Between that and the fact that he didn't put in the time to learn that Ace of Seafood's multiplayer is co-op (so tracking down the other player isn't an issue at all in that game) I'm beginning to doubt James's credibility as a reviewer.

I couldn't decide if it should be lower or not. There are things this game does that it's really uniquely good at, and that pushed the number up - but I cannot recommend the game