A punishing game that misses the mark.

Iro Hero is based on classic shoot-‘em-ups with color polarity systems that add a little puzzling element to an otherwise straightforward genre. While the old school graphics and fast-paced shooting is fun, the unrelenting hellfire of enemies unbalance an otherwise promising game. 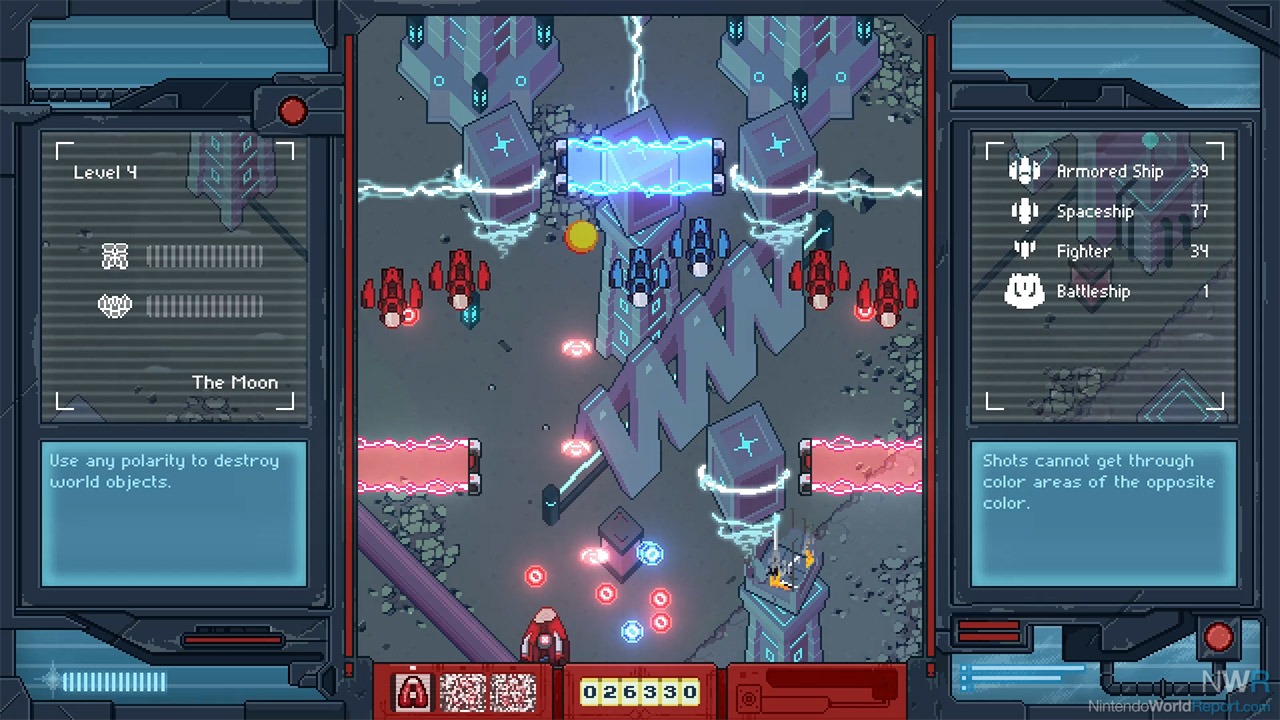 Players take control of Iro, a rebel in the year 2306. After an alien race taught earthlings how to harness their own bodies as energy sources, humankind inevitably messed it up and got greedy. Energy farms popped up where people were reduced to batteries, leading to the death of Iro’s mom and setting up his life mission.

The basic gameplay is straightforward: simply shoot everyone in sight, changing polarity to hit enemies of the opposite color. If you stay the same color as an enemy, you can absorb its ammo to unleash powered up attacks. This simplicity is great and helps keep the focus on quickly figuring out the curveballs the enemies and environment will throw at you… constantly. Did I mention this game was hard?

As you fly through levels you’ll need to time your polarity change carefully, avoiding enemy ships and their barrage of fire. Additionally, color sensitive barriers and reflectors, color changing areas, and more force you to think ahead instead of just charging forward. 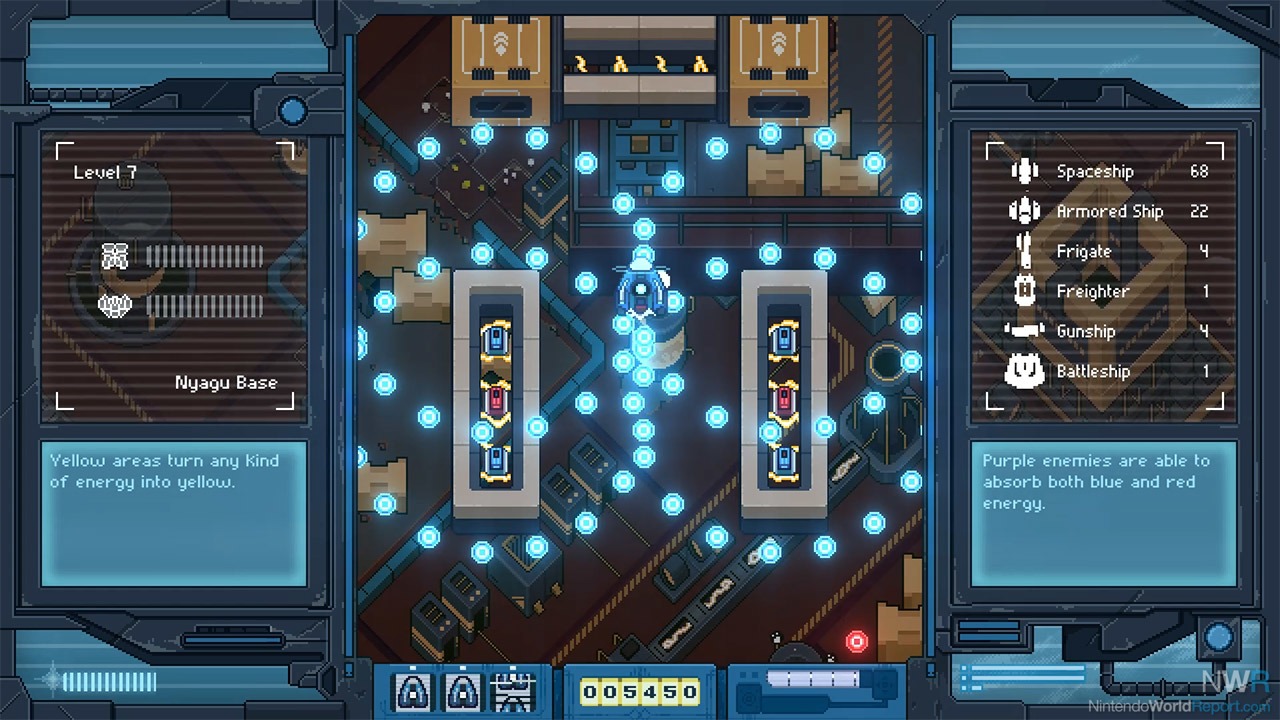 Difficult games aren’t inherently bad. A good challenge is a fun way to put your skills to the test most of the time. However, Iro Hero is ruthlessly punishing right from the get go with little training or instruction. Iro’s ship can only shoot straight ahead (unless you find a power up), while many enemies can shoot directly at your ship, no matter where you are. Some enemy’s only goal is to fly directly at your ship. If you let them get behind you while you dodge, you’re basically waiting for death since you can’t shoot backwards.

True, every part of the level has some way out of the complex bombardment, but it can be frustrating to get through two-thirds of a level only to die and have to start all over. There are no respawn points throughout the game, or health and lives for that matter. Players must study everything quickly, essentially memorizing later levels to even have a chance at hitting every point correctly and sail through unscathed. You have three lives, each one allowing three hits, unless an enemy ship or opposing color area touches you, in which case you instantly explode. When you combine this with how certain levels (like the very first one) are extra-long, it feels almost impossible to move forward while you’re still learning the ropes of each new element. 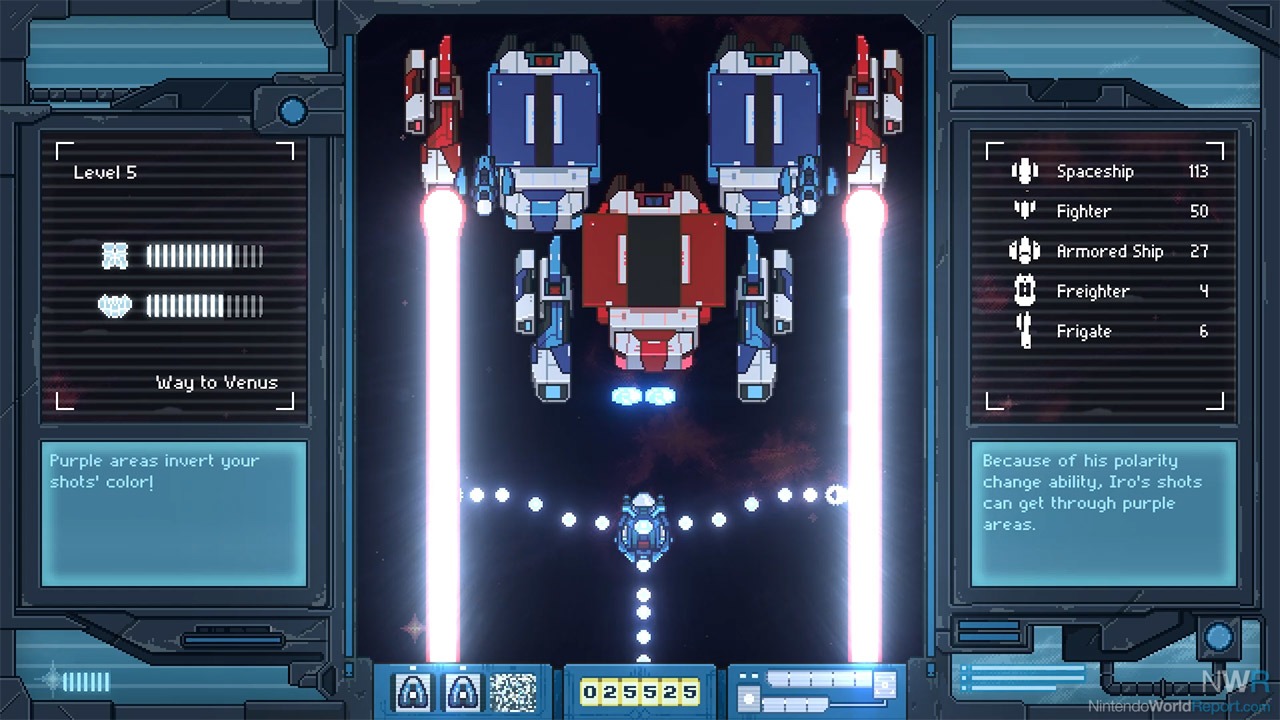 With the exception of a few short cut scenes (with an aesthetic that feels out of place), the story and gameplay tips are displayed on either side of the main action. It’s small and difficult to read, especially when you’re trying to focus on staying alive. This could have been easily rectified with simple voiceover moments.

All and all, the main problem boils down to balance. The game tosses you right into the thick of things and doesn’t care whether you sink or swim. It can be absolutely frustrating to get all the way to a boss only to immediately die and be sent right back to the beginning of a long level. By the time you’re back at that boss fight, you probably have the same low health as before because you didn’t have every death trap memorized and fell for some again. There’s barely an opportunity to study your foes or conceive of a plan before you’re hit and it doesn’t matter anymore. Sending you back to the beginning feels like a punishment and lowers any motivation to push through the level again. It’s lacking that spark that other ruthless games have, where you want to play a level over and over, getting a little farther each time and feeling that sense of accomplishment because you had the tools to succeed.

If Iro Hero was updated to create a better balance, I would definitely want to play it again. The game has a lot of potential. There are great bosses with different fighting styles, the graphics are fun and non-distracting from the gameplay, and the music and sound effects all add to the overall action. However, throwing endless enemies and obstacles at a player all in the name of creating a difficult game does not inherently produce a rewarding challenge. Unfortunately this title sorely missed that mark.