Avoid boredom and potentially painful conversations with your family with this terrific party title.

At most family gatherings, there’s a point in conversation where the safe small talk topics have become exhausted and you can just feel the drift towards chaos. During my many years, I’ve come to recognize this conversational point of no return and discovered the best way to avoid everyone going home upset is to introduce an enjoyable distraction. It’s not easy finding something everyone can participate in. Video games tend to turn off the older crowd, while board games have a tendency to bring out fierce competition that can lead to the same hurt feelings. Luckily, the Nintendo Switch has a few good options when it comes to entertaining a diverse crowd, and this week you can add another to that list with the release of Keep Talking and Nobody Explodes. Mostly known as a VR game, Keep Talking is a terrific non-competitive party game that any number of participants will equally enjoy, regardless of their level of video game prowess.

One of the hallmarks of a successful party game is the ability for participants to understand how to play in a very short period of time, and Keep Talking certainly accomplishes this. One player is designated the bomb defuser and holds the Switch out of view from the other participants. Any number of people then play as the bomb experts, a group of people who have a copy of the bomb defusal manual that details how to successfully disarm the bomb. The goal is to disarm the bomb by having the defuser describe the various components and the experts would then use the manual to explain how to disarm each module.

The number of modules appearing on a bomb, and the amount of time you have to disarm it are controlled in two ways. The first is to follow the predetermined missions based on your level of experience. Modules have varying degree of difficulties, so first time players will want to stick with early missions that provide low difficulty modules and plenty of time to disarm them. The difficulty curve is is weighted more heavily on the bomb expert as the first experience with a module is mostly spent reading the instructions and figuring out what is the procedure needed to disarm it. Be prepared to fail on that first try, but take solace in knowing that it really only takes one attempt at a module to understand what you should be doing. Once the expert has got their bearings, it simply becomes a matter of the defuser accurately and efficiently describing what they see so that the expert can quickly provide the necessary disarming instructions. 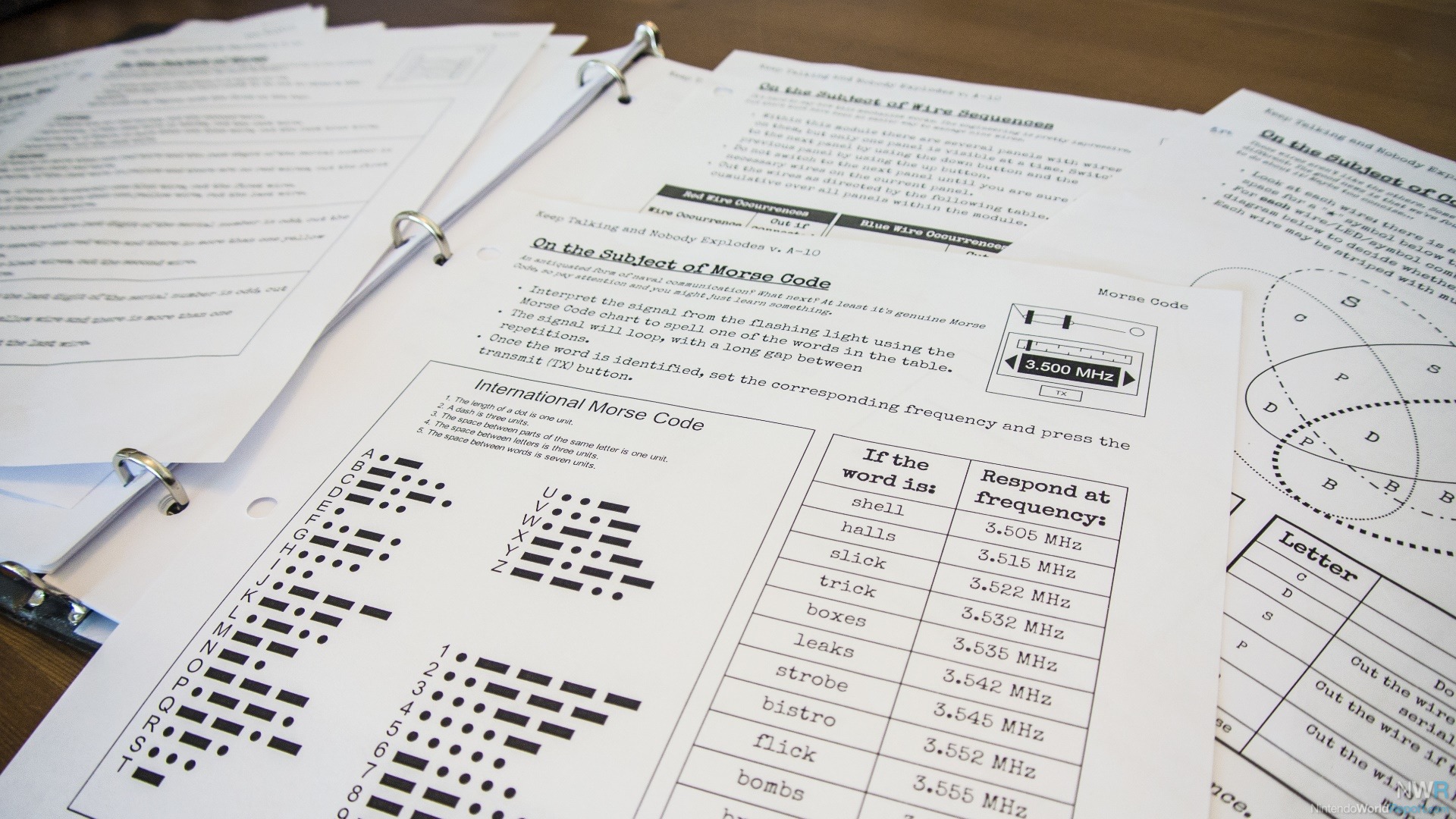 If you’ve got a group who feels confident in their skills, the second mode available is a free play option. Free play gives you control over the amount of modules (up to 11), the amount of time available to disarm the bomb (up to 10 minutes), whether it’s one strike and you’re out, and if the bomb will contain Needy modules. Those can throw you a bit of curveball as they have their own countdown meter and cannot be permanently disarmed like the normal modules. Constant attention is needed as they can reactivate themselves at any time.

If you’re having a hard time picturing the gameplay, you can think of each module as its own mini-game. When the bomb appears on the screen, the defuser has the choice of which module to tackle first. They could go with something easy to begin with, say a wires module. To disarm the wire module, the expert finds the page in the manual on the subject of wires. The defuser then describes the number of wires, and the colors of each wire. Using this information, the expert goes through the scenarios and advises the defuser on which wire they should cut. Successful instruction results in the disarm indicator glowing green, while an incorrect cut leads to a strike against you. Too many strikes, or the countdown reaching zero results in a bomb exploding in your face. 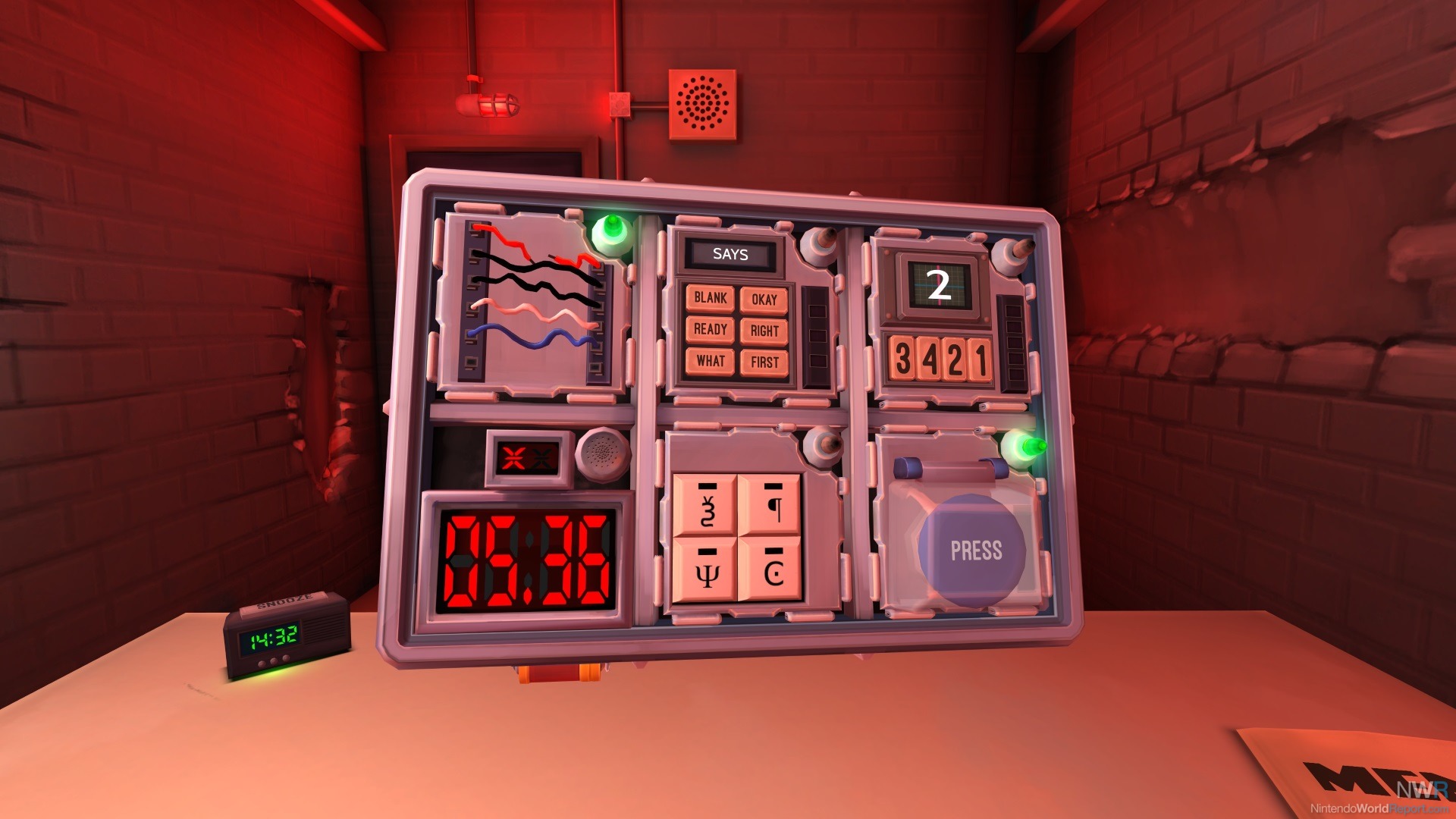 Of the 11 standard modules, two stood out for me. The first is on the subject of keypads. A keypad has four buttons each with its own unique symbol. The defuser has to verbally try to describe each symbol so that the expert can find the correct group of symbols and dictate the order they should be pressed. More often than not, the conversation can lead to a discussion about what the defuser is trying to describe. In one such instance I described a symbol as nose with a stud in it, with the expert then confirming if I meant the ‘W’ with an apostrophe over it. My other favorite module was the maze. A six-by-six grid is shown on the module, with two green circles that indicate which of the possible nine mazes it is. Once the particular maze is established, the defuser needs to describe the starting position indicated with a white square and the end position which is indicated with a red triangle. If all goes well, the expert directs which buttons should be pushed in order to get the white square to the end point.

The constant participation along with the ease of pick-and-play make Keep Talking and Nobody Explodes a terrific game to bring to a party. But maybe most of your multiplayer experiences are online, well you can just as easily play via your favorite chat app. Since all the communication is verbal, and the manual can be downloaded from any device for free, anyone with earshot can be a bomb expert while anyone with a copy of the game on their Switch can be a bomb defuser. The number of good pure party games on the Switch is short, so it’s great to have another title that encourages participation and results in chaotic race-against-the-clock fun.

I have a friend who has been raving about this game ever since it's released on PC.  Glad to see that the gameplay transfers over well to Switch.  This is definitely going to be on my "to-buy" list.

This sounds similar to the bomb diffusing game in Jackbox 2, which my parents, sister, and sister's husband loved.

This sounds even more involved. And a little like an escape room. They're gonna love it.