They made a Dark Souls game for the 2D Metroidvania lovers.

If Ska Studios’ goal was to make 2D Dark Souls, they certainly succeeded with Salt and Sanctuary, a punishing, side-scrolling action game where you create a hero and make your way through a challenging world filled with darkness, overbearing enemies, and lots of death. While my time with Salt and Sanctuary reminded me of some Soulsian frustrations I’m not a huge fan of, it also shined a new light on the poise and elegance of the style that requires a mastery of mechanics to survive and progress.

This world is brought to life in a distinctive hand-drawn style that is almost equally brutal and goofy, calling to mind the developer’s past work on more arcade-like beat-’em-ups like Charlie Murder. The tone is pitch black, but little things like the cartoony look of character faces bring tiny bits of levity to the forefront. That weird contrast helps make the overall brutality a little duller but overall more palpable. And brutal this game is, as the side-scrolling battles require precision and deftness, accounting for the length your attack animations take while also keeping an eye on the enemy so you can time your parry or riposte and try not to be overwhelmed. It’s a constant challenge and the open, level-less design makes it easy to stumble upon an enemy that’s potentially out of your league.

The overall layout is reminiscent of a Metroidvania, but for better or worse, it has no map. Thankfully, the flow is straightforward enough for this to not be a game-breaking issue, but the lack of guidance made me a little more cautious of going off what seemed to be the main path. It is engrossing enough that getting lost is fun, but not so much when you get your head beat in by a difficult enemy and then you’re not sure where to go next. 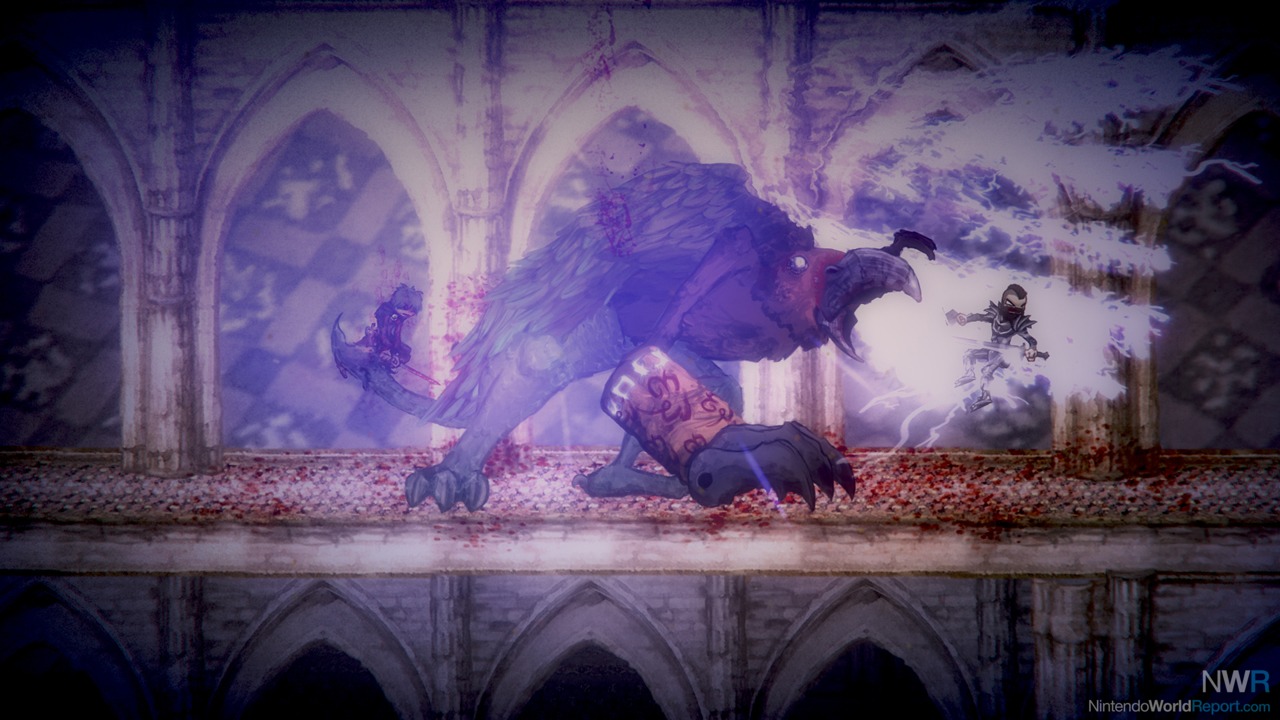 Salt and Sanctuary is the kind of experience I might recommend poking around a guide to stave off frustration. Thankfully since it debuted on other platforms two years ago, a lot of literature is out there. While discovery - to an extent - is a positive, thrilling aspect, the game throws you into the fray with very little explanation about what anything does. You’re taken immediately to a character creation screen that gives you class options and more details but nothing of consequence is explained about what anything does outside of any pre-existing knowledge of what a Knight and a Mage usually do in games. Some classes are definitely more friendly to rookies, but the only way to find that out is through experimentation or online assistance. I made multiple builds before settling on something that seemed like it could go deep in the game with less potential pain. Adding to that, too often it is hard to parse through the overflowing amount of information for equipment, items, and stats, for both that lack of explanation and the smaller, darker text that displays a little too tiny on your Switch screen. It’s not as much of an issue docked, but it’s a little problematic otherwise.

Working through some of those issues is worthwhile as Salt and Sanctuary is a deep, expansive adventure rife with challenge. The combat, while demanding, is deep enough to stay interesting but not complicated enough to be overwhelming. An emphasis on platforming also keeps exploration varied to boot. Death can be punishing, since an enemy steals your accrued salt, required for upgrades, and then you lose it all if you die again before defeating that foe. Thankfully, salt is relatively easy to grind for if you fail too often and even a battered player can gain enough resources to become stronger.

That all comes back around to how, at its core, Salt and Sanctuary is 2D Dark Souls. I say that not as any indictment but more of a very adept comparison. Ska Studios smartly transformed the core concepts of a Souls game and turned it into a side-scrolling action game with an ample amount of Metroidvania influence. The result is tough as nails, but doable with perseverance and gumption. Salt and Sanctuary is not for the faint of heart, but it’s a journey worth suffering through for those who think they are worthy.