Blocky graphics combine with lighthearted gameplay for what works best as a party game.

Soccer Slammers hits Switch as the 2018 World Cup comes into full swing and the timing might be right for a good old-fashioned soccer experience. Truthfully though, you might not find your thirst for the sport quenched in Atooi’s latest game, but nevertheless this is a fun and chaotic local multiplayer-focused sports game that makes up for what it lacks in depth and breadth with frantic scoring and nonsense. 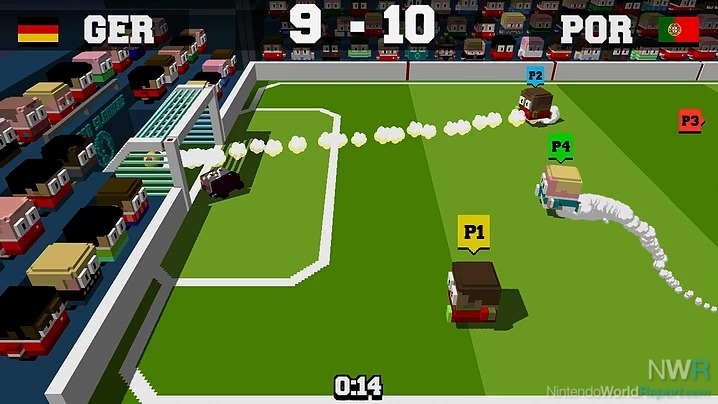 While the teams might be populated with real-world countries from this year’s World Cup (and a Mutant Mudds team), the action is an arcade-heavy twist on the sport. The matches are 2-on-2 with an automated goalie on a much smaller field. Controls boil down to movement, tackling, passing, and shooting. What separates this from your typical soccer game is that the pace is lightning quick. The ball changes hands constantly and the clearest way to victory is to create any kind of space between you and your opponents so you can charge up a shot and aim at the goal. But with the action being so fast and furious, goals can happen even when no one intends for them to. It’s almost like pinball in how quick it all moves. The fact that things can sometimes feel a little too zany and random can be frustrating if you’re being very competitive, but as a lighthearted experience, the whole thing is a good time.

The daffiness makes it work best as a local multiplayer experience (no online is present or planned) and the relative simplicity makes it great for docked or tabletop play with two to four players. A little bit of nuance rests underneath the blocky veneer here as well, especially when players work together on the same team. That makes the other multiplayer option - the cooperative two-players vs. the computer World Cup mode - novel and fun. 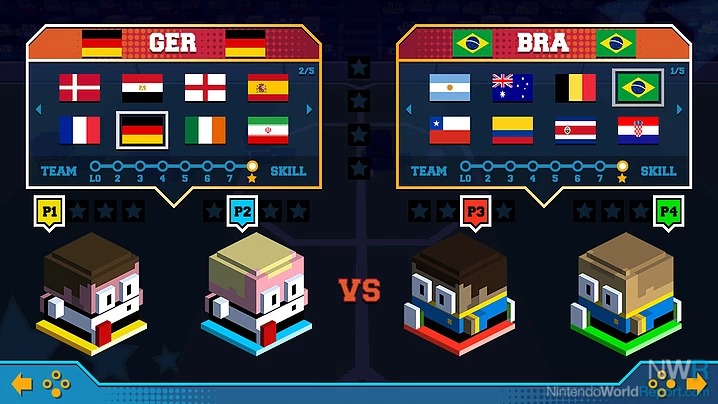 Everything can be played solo as well, but a lot is lost in the single-player experience. It’s just not as enticing when you’re all by yourself and outside of the World Cup mode that takes after the structure of the legendary tourney, it’s not deep with tasks to complete.

Soccer Slammers is an amusing multiplayer game that isn’t really worth checking out unless you have others to play it with. It might not live up to the titans of soccer video game history, but it’ll do as a nice compliment to FIFA, especially for the less technical crowd.

I really like art style on this. This is published by Atooi, so I assume Jools made it. It really translates his art style to 3D very well.