Few games, if any, are as important to Nintendo history as the 1981 arcade classic Donkey Kong. However, the fact is that since it was released in arcades the true title hasn’t seen the light of day. Sure, an NES version was eventually ported and even at one point updated to include a missing stage released on Nintendo’s Virtual Console services. Don’t forget the version seen in Donkey Kong 64 either. Though the fact is these later releases all used different code, so the original game was relegated to old arcade cabinets. 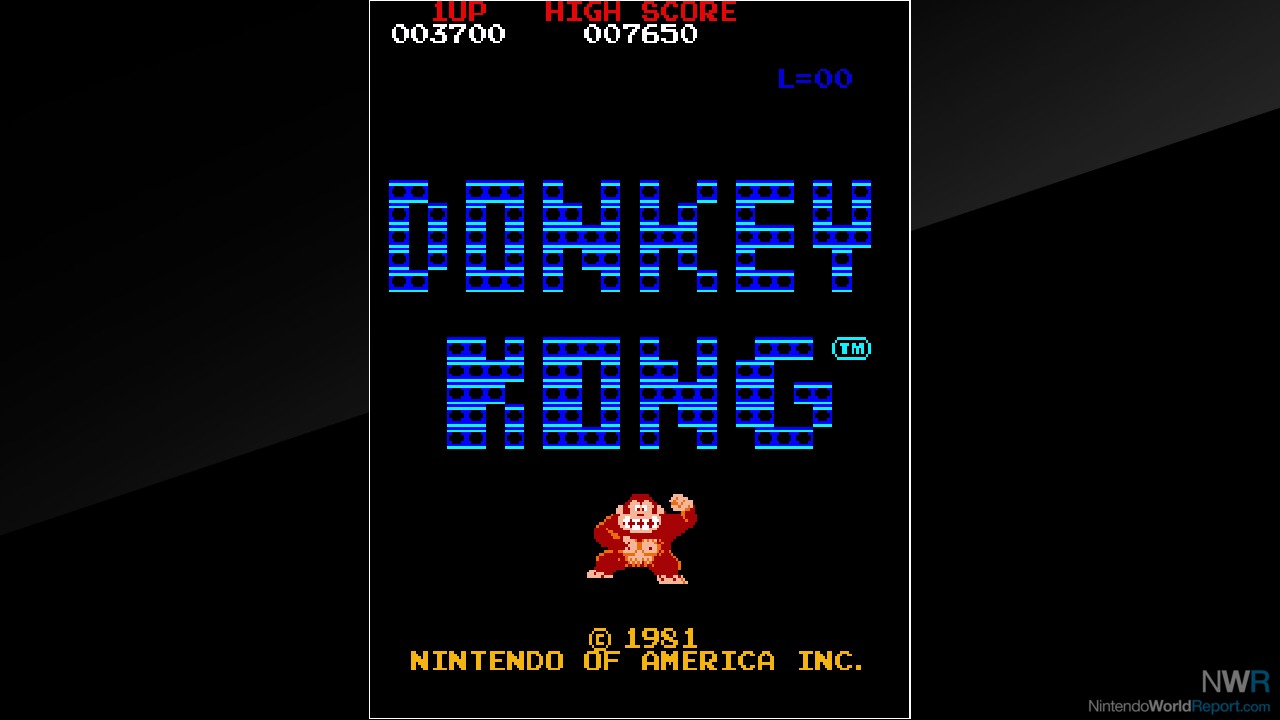 Now, seemingly out of nowhere, the true original Donkey Kong has made its way to the Nintendo Switch under Hamster’s Arcade Archives banner after 37 years. As of right now we don’t know what the hold up was. Many believe that the source code for the game was actually owned by a company that did programming for Nintendo back near its release, but that’s beside the point. The fact is Donkey Kong is finally back.

Donkey Kong is an arcade high score attack game and also the first jumping platform title to be released. Mario tries to save Pauline from the giant ape Donkey Kong across four different stages that greatly change how a player needs to approach each challenge in order to be successful. The variety is welcome and helps keep the experience fresh. As the player progresses, the levels loop and the difficulty increases.

The Arcade Archives version of Donkey Kong actually lets players select from three versions of the game in Original Mode. There is Early Version (the first Japanese release), Later Version (an updated Japanese release that fixed some bugs), and the International Version that most people reading this will be familiar with. 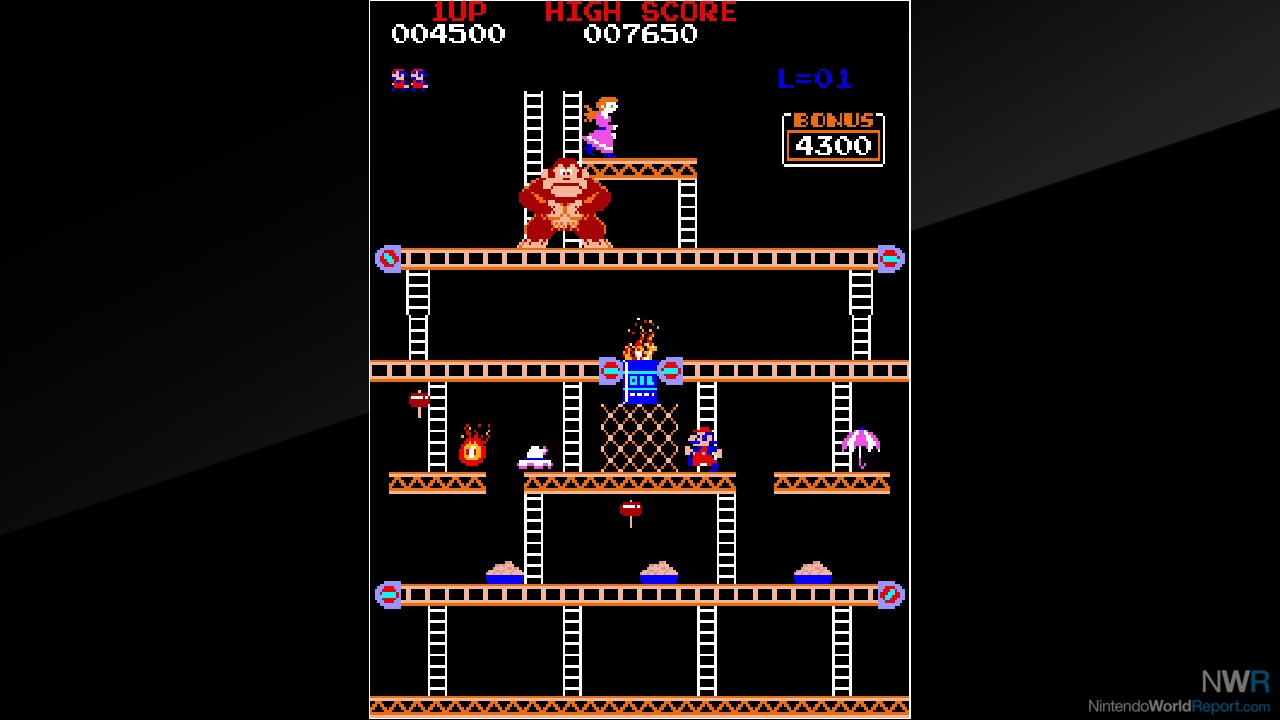 The Japanese versions of Donkey Kong seem to start out way less difficult from the International release. The enemies and platforms start off very slowly, at times almost painfully so, which hurts the pace. The plus side is that the different types of the four stages found within Donkey Kong appear in order (Barrel Stage, Cement Factory, Elevator Stage, and Rivet Stage) so less skilled players will likely be able to see them all without much trouble. The only other difference I noticed is that most players will have enough space to enter their first name in the Japanese release; the International one only allows for three initials.

While the Japanese release may be a good start for beginners, the more challenging and better-paced International release is where the real action is at as far as I’m concerned. The famed Donkey Kong World Records and competition take place in the International version and, as previously stated, skilled gamers will find the pacing more tasteful. The only downfall to the International release other than its increased initial difficulty is that it will be harder to see all the stages as you will have to play some stages over again before gaining access to new ones. 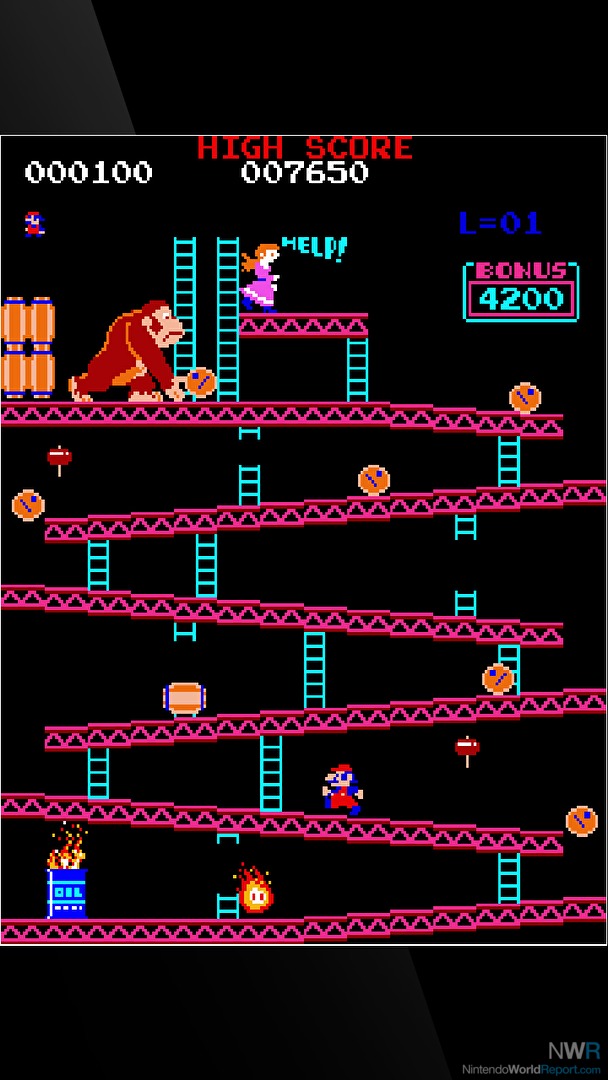 Playing these in Original Mode gives the player access to options including all the relevant Donkey Kong dip switches, or in-game options, as if you owned the cabinet yourself. There are also many other options to tinker with so each player can get the experience they wish for. Mess with the sound quality, display size, add scan lines, turn off a wallpaper, and even turn the screen to enjoy the game in tate mode facing either the left or right sides of the screen. Arcade Archives Punch-Out!! only allowed for one direction of tate mode, so this is a nice improvement. Most of these options carry over to the competitive modes as well.

All three versions of Donkey Kong found under Original Mode include their own online leaderboards. However, Original Mode also offers a Save State, which I’m not fond of since it allows people to abuse it and upload scores, even if it is only ranked in a casual mode.

Arcade Archives Donkey Kong follows in the Arcade Archives tradition of including two types of competitive modes as well, Hi Score Mode and Caravan Mode. Both of these modes let players choose to compete in either the Later Version of the Japanese release, or the International version thus creating four separate competitive scoreboards. One setback is that while in these modes there is no way to turn off the screen border, which produces a strange, but minor, slashing effect around the gameplay area. It’s not very distracting, but still a nuisance. Hi Score Mode is a standard playthrough of the game with competitive settings pre-selected. Caravan Mode gives the player five minutes to rack up as many points as possible. 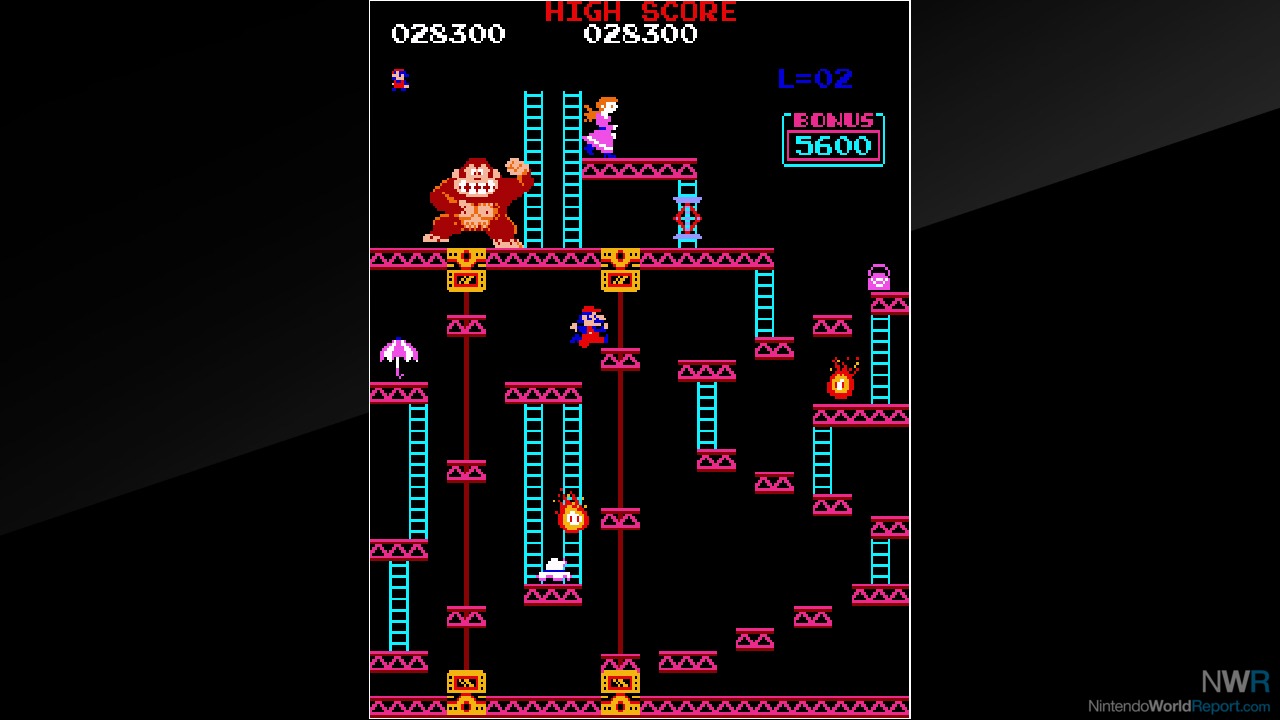 The other problem with the competitive modes, also plaguing other Arcade Archives titles, is that pausing the game will abruptly end a run and force you to quit. It’s easy to get distracted and, out of habit, click the + button to pause as many games have programmed into my brain. While having a good run, nothing is worse than mistakenly triggering this. Instead of having a single button press activate the menu, it should be a weird button combination to make sure this doesn’t happen.

Aside from that, a few other issues plague the Arcade Archives Donkey Kong release. The first is that there appears to be an audio issue with the way Mario walks. In the arcade release, differing sounds are made while Mario continues to take steps. For some reason, in the Arcade Archives release it’s just the same sound on repeat. Hopefully this audio bug is fixed in an update.

The second issue is that the original Donkey Kong cabinet had a four-way joystick. This means that only four distinct directions could be pressed, no diagonals. By default Arcade Archives Donkey Kong has an eight-way joystick turned on. At a glance this doesn't seem like a big deal, but skilled players will tell you it is. But in order to understand why I'll need to explain a more advanced Donkey Kong strategy. 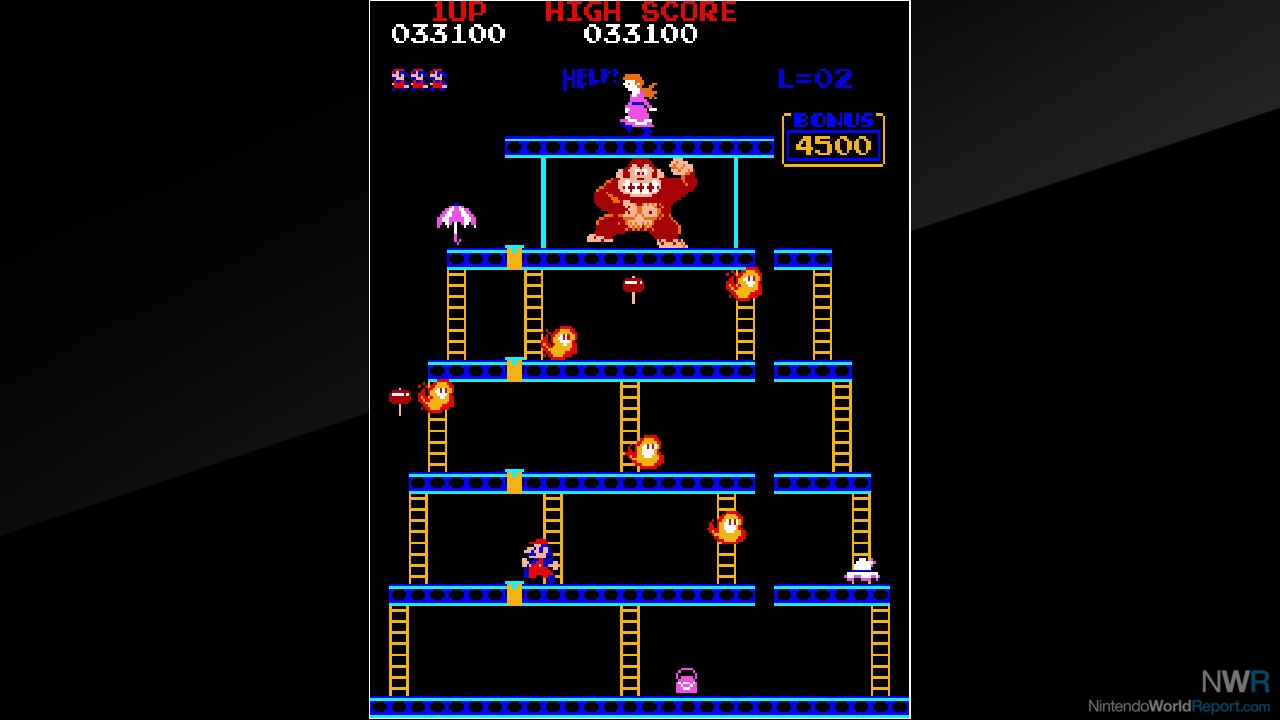 While playing the Barrel Stage in Donkey Kong it's possible to help influence which ladders specific barrels go down. How? Walking toward a ladder as a barrel rolls by will increase the odds of that barrel dropping down it. With an eight-way joystick it's possible to use the diagonal commands to influence the drops of these barrels while Mario climbs up or down the ladder. This gives an unfair, and clearly unintended, advantage to those using this joystick. Luckily, it's possible to change the joystick to not interpret diagonal presses, but there is no way to see who's using the method on the leaderboards. For authenticity's sake I suggest you choose either B Type or C Type under Diagonal Input Restriction.

Despite some issues, Arcade Archives Donkey Kong is the real deal. The long wait to play a true home version of the arcade classic that made Nintendo a household name is finally over. Donkey Kong has so much historical significance that it's impossible for me not to recommend it. As stated before, it was the first jumping platformer and it introduced some of gaming's biggest characters in the way of its star Donkey Kong and Mario.

Donkey Kong is a true classic that should be played by anyone with an interest in gaming history. It's one of the most competitive and challenging classic arcade titles even to this day and without it, I'd argue this website wouldn't even exist. Sure, Donkey Kong may show its age a bit, but the gameplay still holds up and can be very addictive. Add in the fact that we still don't know for sure who owns the code to this original game and I would call it a must buy. Who knows if this release could just be ripped from the eShop as some contract expires. In any case, what are you waiting for? You have a future New Donk City Mayor to save!