Video games could use more comedies and well, this is one that makes fun of big open-world RPGs.

Comedy in video games is hard to pull off, even more so when it’s the most distinguishing factor about your game. West of Loathing boldly tries to stick the landing, as this jokey stick-figure RPG adventure takes you through oodles of non sequiturs on a quest to go west. Essentially, it’s Skyrim through the lens of a joke book. While some elements of the gameplay might be a little too simple and goofy, the farcical satire wins out and West of Loathing is a deliriously silly romp. 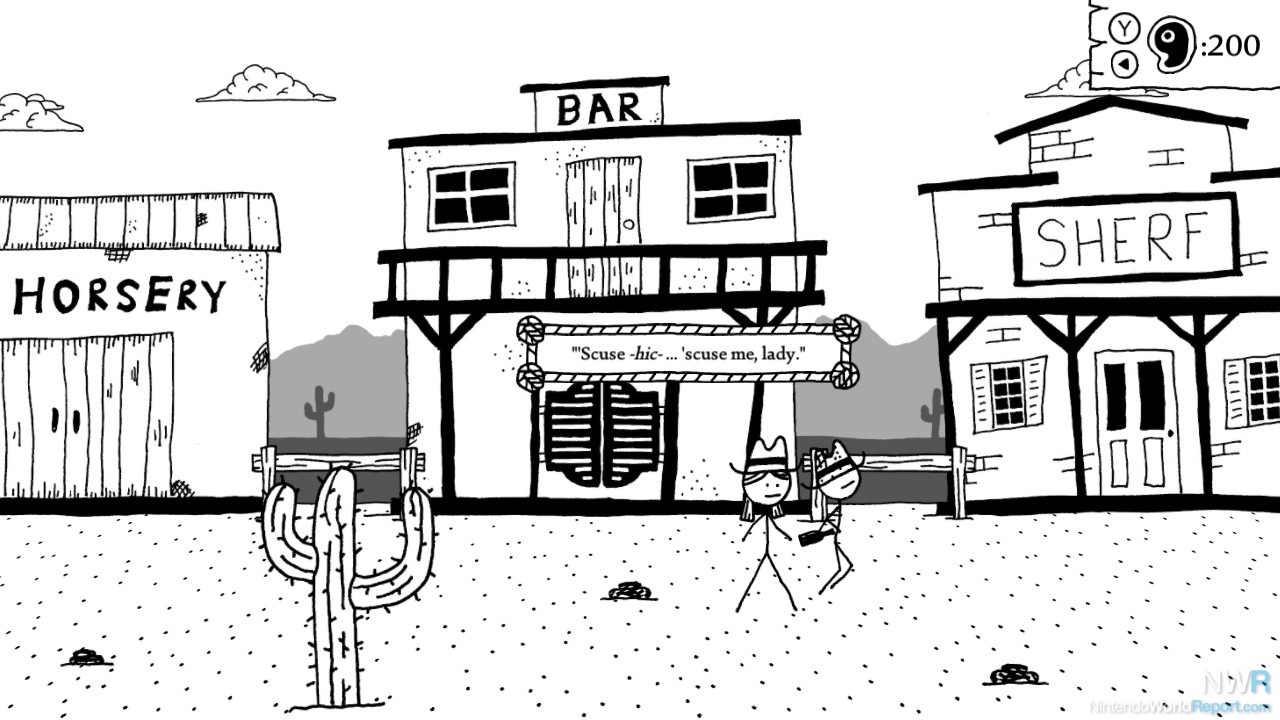 A tutorial area sets the stakes well and lets you customize your created character, which can be one of three classes: Cow Puncher, Snake Oiler, or Beanslinger. Your hero then aims to go west to make their fortune. A bunch of nonsense follows as you go through a slew of side-scrolling locales to earn meat currency, fight bandits, and solve puzzles. The main quest goes slowly west, but much like its loose Elder Scrolls inspiration, the magic is in the side quests. To go into too much detail of the content of these bizarre sojurns would ruin the shock and awe. Quests take so many left turns that you’ll wind up right back where you started ready to go in another cubic rotation.

A wealth of the charm is born out of the dialogue and situations, from the travails of the many local Sherfs to the poker-like card game that has the most asinine rules (while still being logically consistent I think). It’s amusing wandering to different areas with your horse and partner, trying to find a path forward. New side quests and areas are found almost constantly, always giving you something amusing to do. It can be hard to sift through everything that needs to be done, even more so when your collection of items soars to an untenable amount of stuff. The best route through this game is to just roll with the nonsense and keep going. Worrying too much about 100% completion and full mastery exposes the more sour elements.

The most sour part is the turn-based combat, which probably feels that way since it’s one of the few semi-serious elements. It’s a lightweight and simplistic system, but it often slows the game down. I got to a point where I’d start avoiding battles unless absolutely necessary because it just wasn’t as fun as talking to people and doing tomfoolery elsewhere.

Even if the combat is a little slow, the whole game looks weirdly beautiful with its stick-figure aesthetic. The lighting is great and the animation is smooth. The style is cohesive in a silly Western way, made even better by the old-timey soundtrack. An early discoverable Stupid Walking option might be the absolute best thing in a video game, though, as once found, you can turn on the ability for your hero to walk around in random, absurd ways. It was a surefire way to keep a grin on my face during the 5-10 hour campaign that is decently replayable because of the amount of customization and choice.

West of Loathing succeeds by making you giggly and happy while you play it. Treating this game like a super-serious RPG is the wrong way to go about it, as that’s where the holes start to emerge, whether it’s the middling combat or the mildly annoying quest and item management troubles. This is a comedy, pure and simple, and thankfully it’s one that’s clever and funny in a way that makes up for any lesser gameplay segments. It’s a great chaser between the ample supply of serious games out there, especially if you have Stupid Walking turned on.