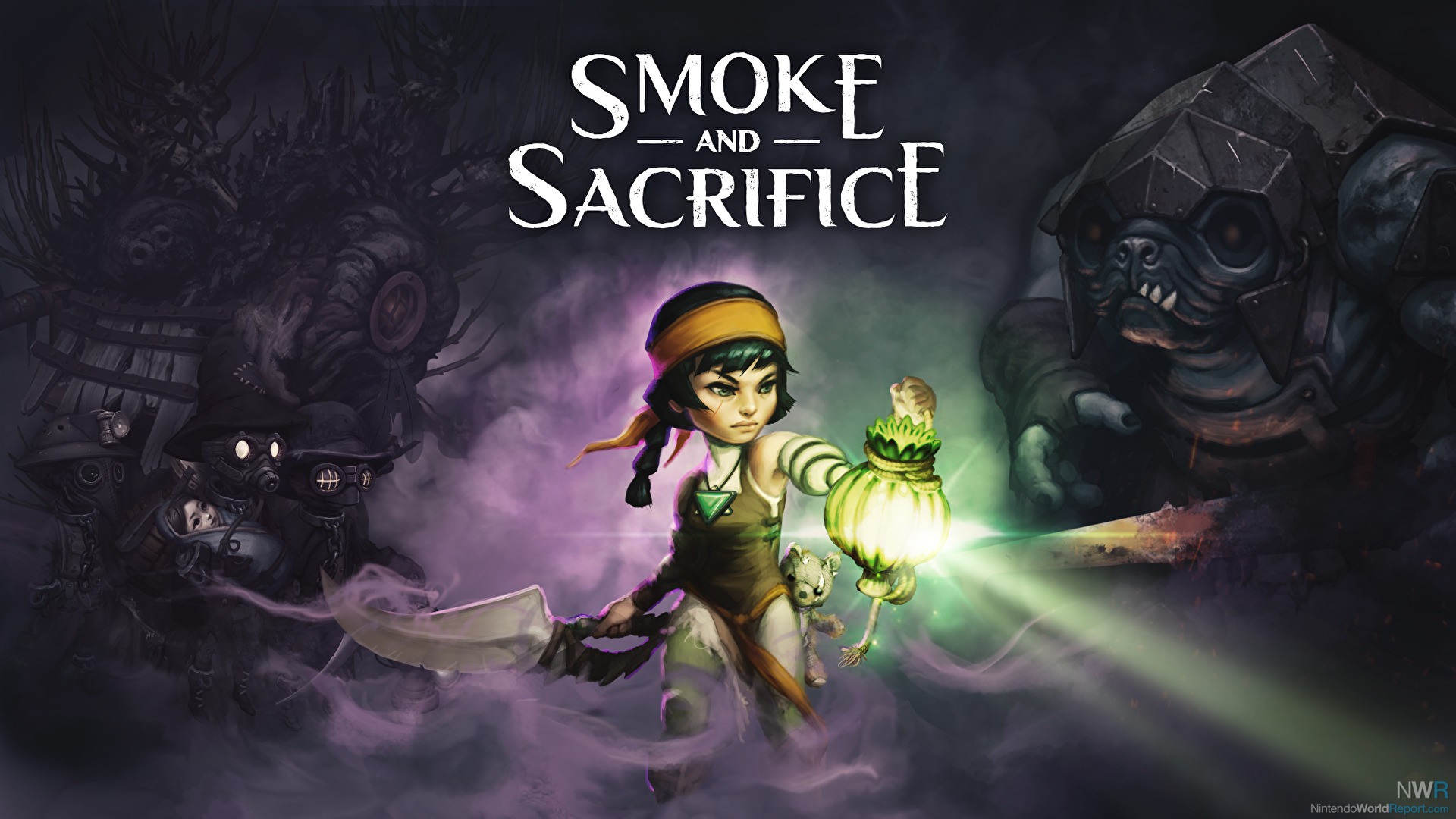 The debut game from an independent developer is typically a “play it safe” type of project, but with newly formed Solar Sail Games, they threw the “play it safe” model out with their first title. Smoke and Sacrifice is a bold, beautiful and challenging survival RPG.

To set the stage of this sad but engaging story, we follow Sachi, a young woman who just gave birth to her first child. Unfortunately for her, she knows that to keep the blessing of the Sun Tree, her son must be sacrificed. The Sun Tree is what has replaced the actual sun within this land. It provides light for this small farming community since the actual sun has failed. As the priests of the village proceed with the ritual, Sachi feels that something is not right but has not choice but to continue with giving up her son. The story skips ahead seven years, Sachi has gotten used to her new life, but still feels a sense of belief that her son is still alive. All of the sudden the Sun Tree generators fail and darkness overcomes the village. In the chaos, Sachi searches for the priests, however none can be found. She heads to the temple where the sacrifices take place and finds herself transported to a whole new world that she never knew existed. This is where Smoke and Sacrifice really opens up.

In this new area, you freely move around but start to run into obstacles. The first person you see is a villager wearing a gas mask. This is crucial as there is a smoke covering the entire land. The smoke is one of the main hooks. As you navigate the world, instead of a traditional day and night cycle, there is a smoke and no smoke cycle. You must have a lantern that fends away the darkness or your health will get depleted the longer you stay in the smoke. The challenge is ramped up during this time as well, as monsters are more aggressive, it is harder to see where you're going and you have to keep track of that lantern as it, among most other tools and weapons, has a usage timer.

The bread and butter is the games' crafting system. Hundreds of items can be made to help you along. New recipes are obtained through main quests, side quests, and also just littered around the world in the form of stone tablets or hidden messages. When it comes to revealing the recipes on those last two, you need to have special items that of course can be crafted. At first, it is a bit overwhelming, but gets easier as you progress. Crafting goes hand- in -hand with the survival portion in this game. Health regeneration items are everywhere, however, there are two caveats: they offer only a little bump in restoring your HP and you can’t stock up on hundreds of them as since most are plant based and they basically die in your item pouch after so long. So don’t do what I did, and get 30 pieces of sour fruit and then have them all die since I didn’t use them. As you find new recipes, more food items become make able, which will remove the limit of how long they last in your pouch.

Navigating Sachi through the world is an absolute delight. Despite the dark and dreary aesthetic, the visuals are stunning. The lighting and attention to detail is impressive, especially when it comes to the vegetation of the lands. Monsters roam around and completely are acting on free will. They don’t just go in a normal pattern but will stray off the path if they notice you or another monster. A particular monster is a giant boar and his size sometimes will get the best of him when he runs into trees, stunning him for a moment. 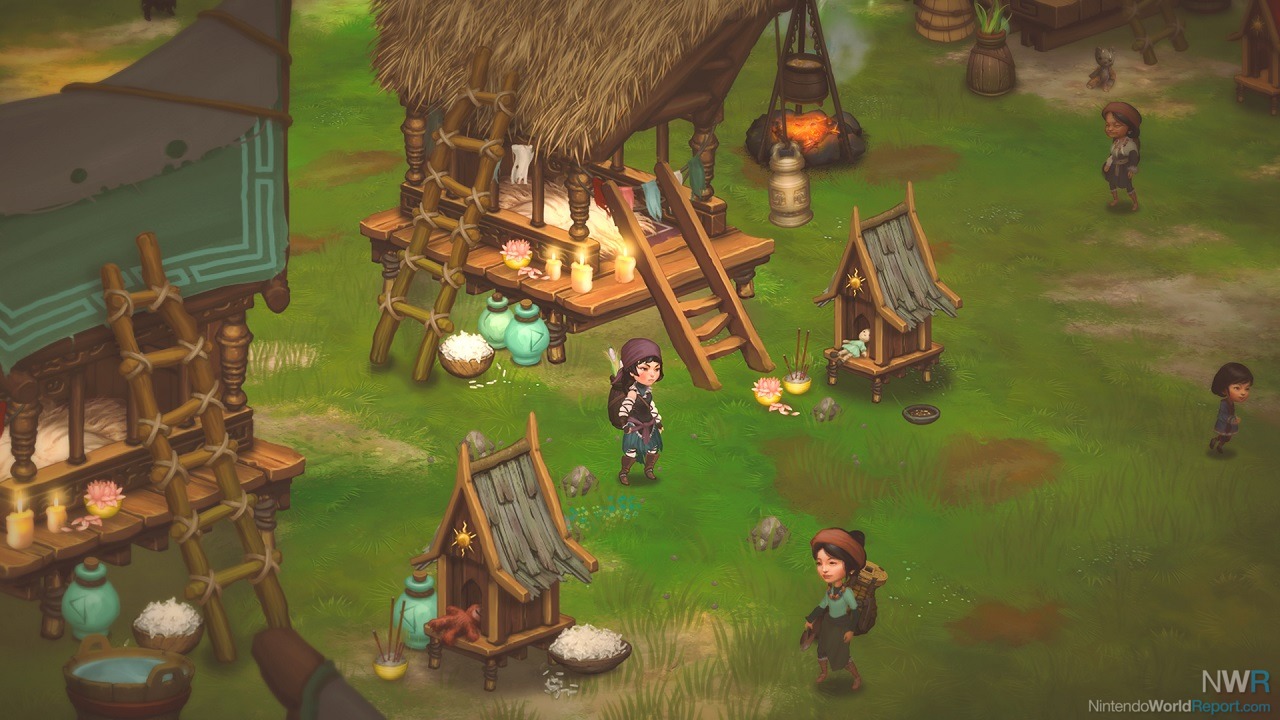 Quests are sprinkled throughout the areas by an exclamation point over a person's’ head. The main story is guided in the same way and the difference between the quests is not really apparent, however once you get the flow of what to do, you learn which ones will move the story along and which are optional. In my experience, all quests that I ran into were worth it, as it gave me access to new items, money, recipes, and other useful items. Plus you get to hear the interesting stories of the locals who are as confused as you are on being there. The currency is quite important as well. Instead of just accessing a new area and a warp point is given to you, you have to pay to unlock a warp tunnel. They are scattered all over the place, but knowing which ones to unlock is key as money is scarce in the world. I noticed that it was best to unlock ones next to a save point. Made dying a lot more manageable. Let’s face it, this is a survival game and dying will happen a lot. In every turn, danger is in sight, whether it's the smoke, or monsters or even the terrain, you need to be on your guard at all times.

Smoke and Sacrifice is like a fine cigar, a slow burn from start to finish. It can be very challenging at times, but the reward is worth it once you complete a quest that seems impossible. The intricate crafting and compelling story only compliments the beautiful art direction. Smoke and Sacrifice is a single game that beckons to becomes a series.